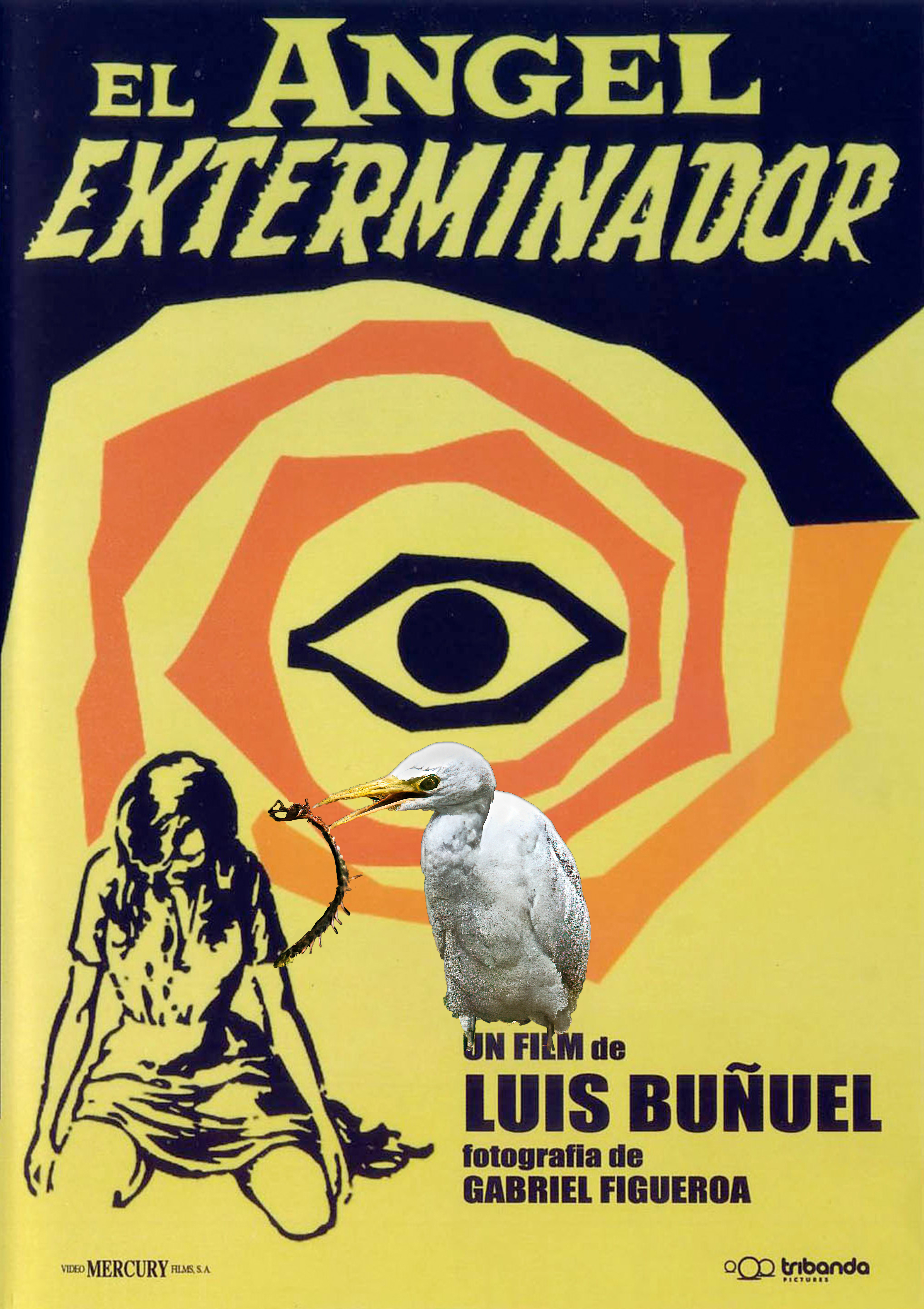 The dinner offering is one of Hawaii’s giant centipedes. The cattle egret poked and jabbed at it, then picked it up by the head, flipped it in the air, caught it, and swallowed it whole with a single head-ducking gulp.

Tod Browning sleeps an undisturbed sleep. This night, however, hour by hour, his bed in the dark is becoming shared with another body. The body hasn’t yet awakened from the sleep in which it was created, but after it opens its eyes it will see Tod, the man whose camera penetrated the dark and forced it to dream body into being. In their bed in that first awakening, Tod and the body will open their mouths and say to each other: 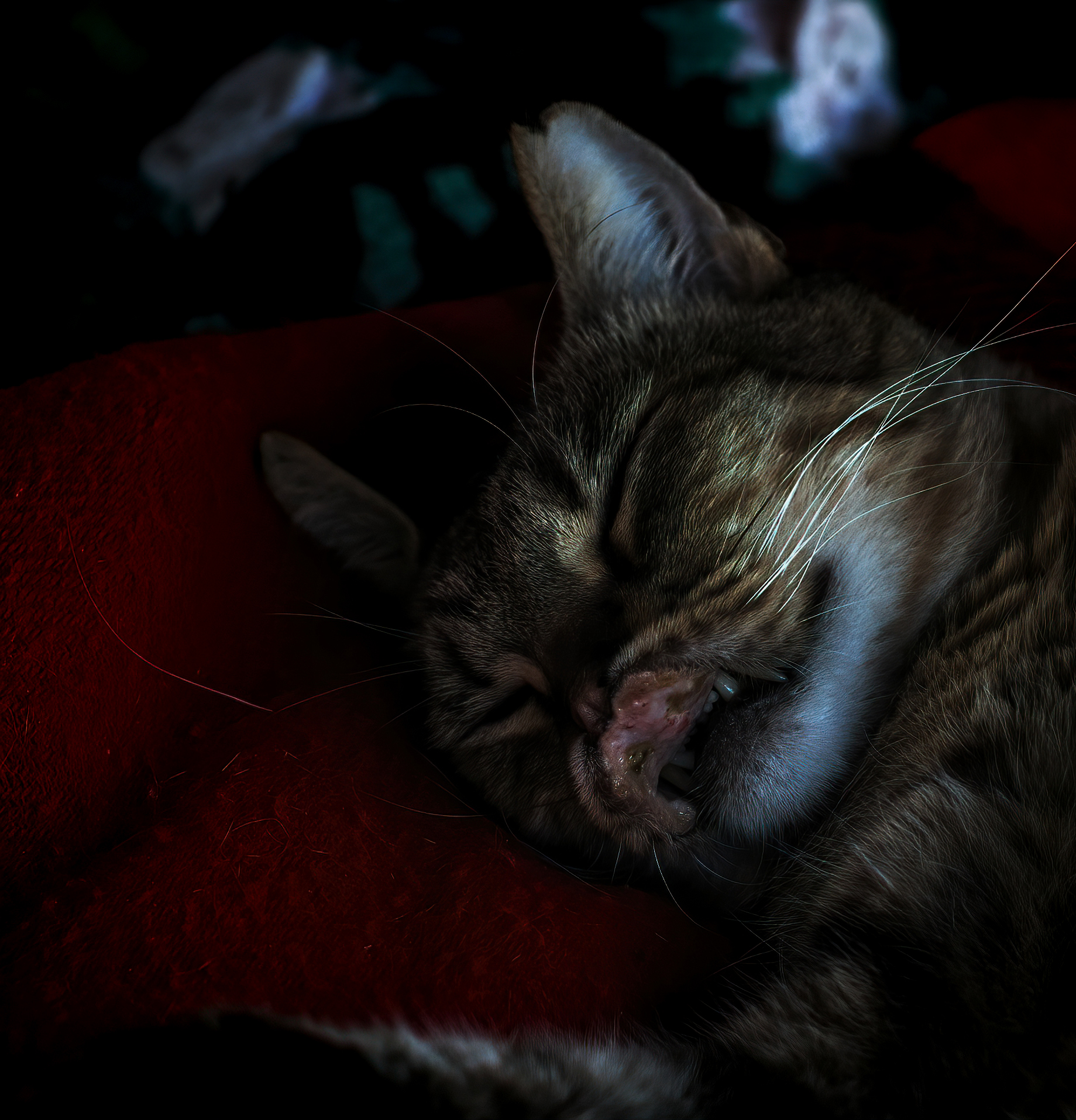 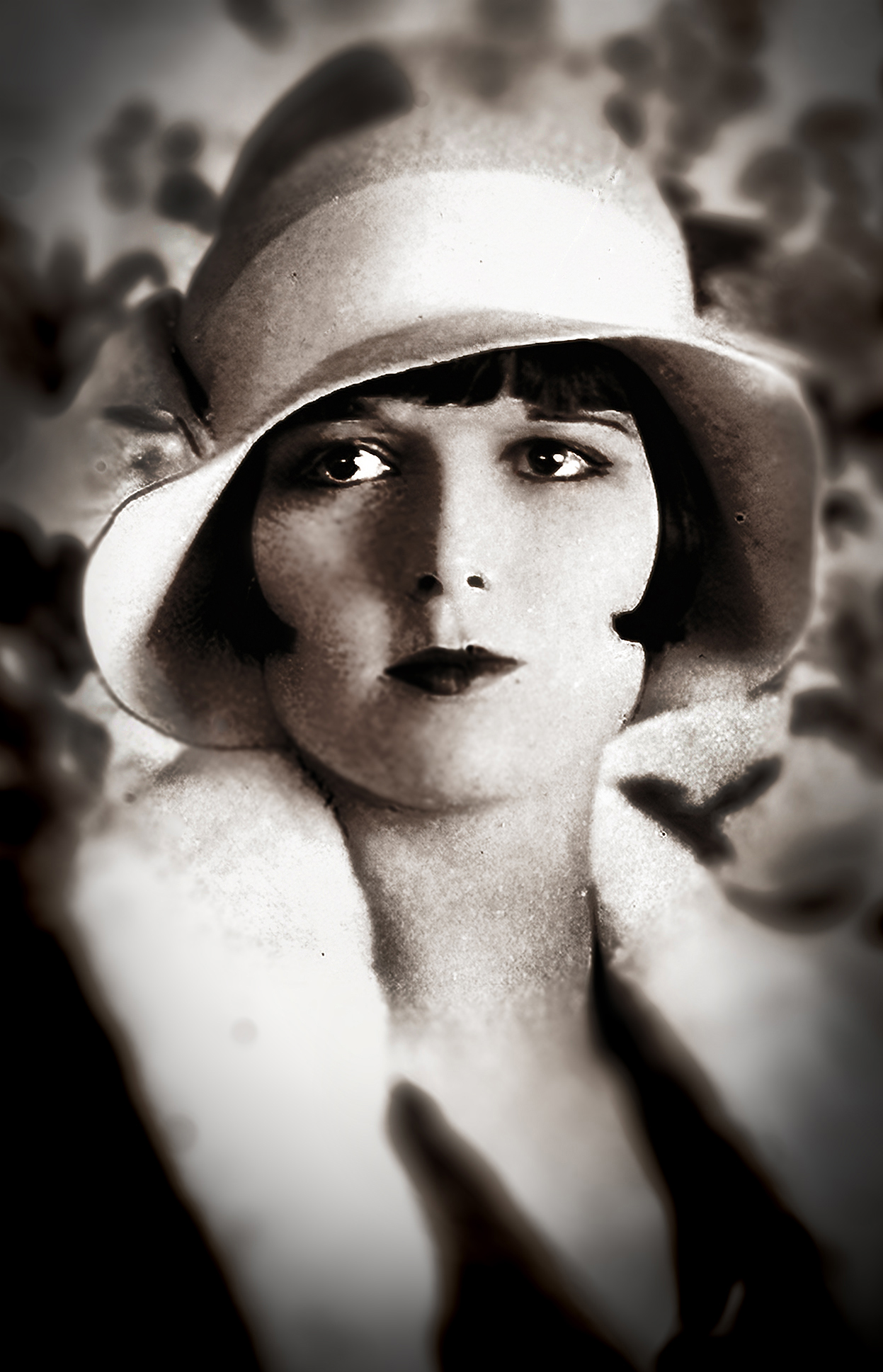 The Library of Congress’s notation at http://www.loc.gov/pictures/item/2014712606/ (George Grantham Bain collection) indicates that the image is undated, but a date marked on the negative is July 25, 1927. 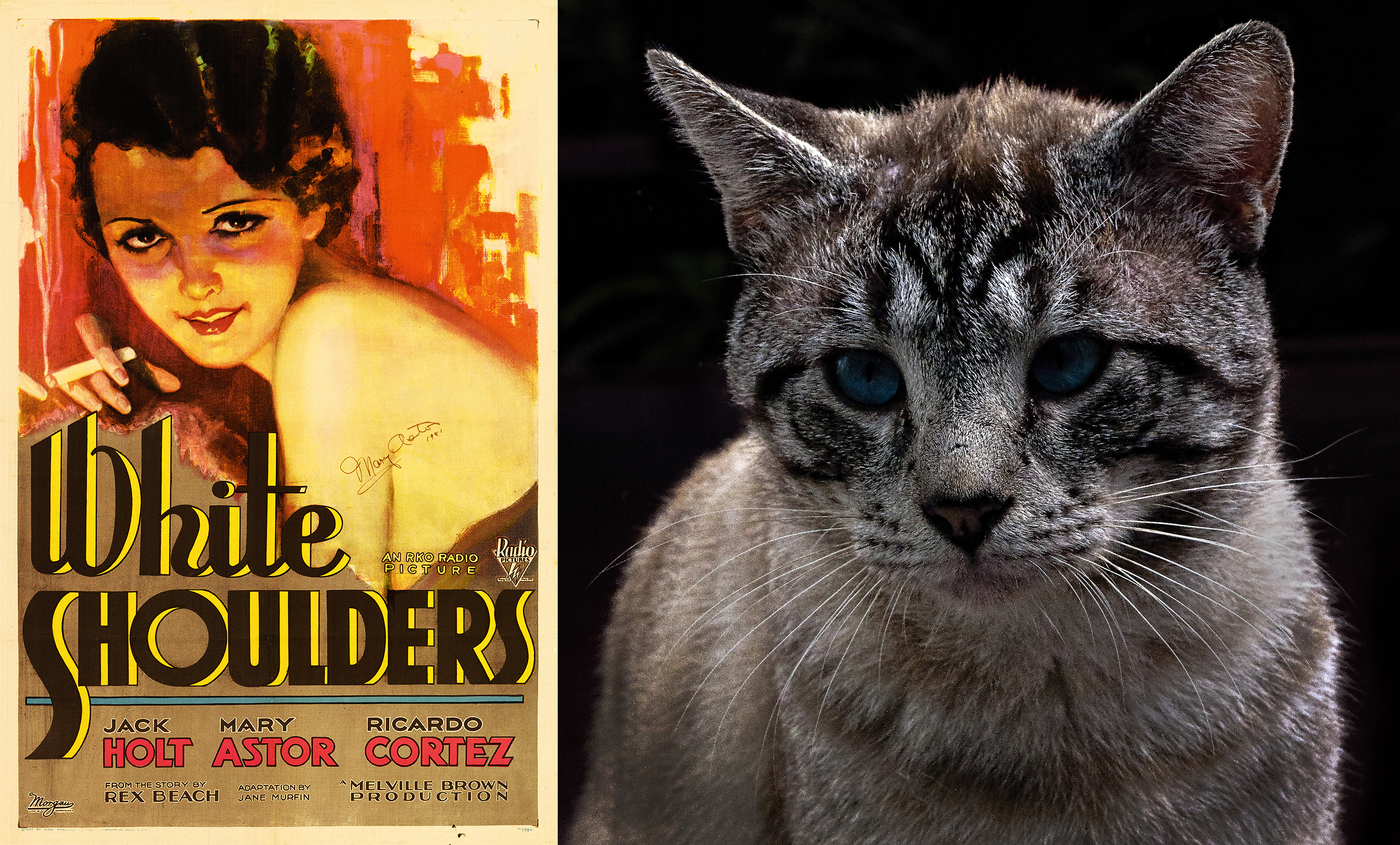 Forward then: fifty years after the era of Abraham Cahan, but still going strong. The headline reads, “Israel will not give up even a sliver of land.” END_OF_DOCUMENT_TOKEN_TO_BE_REPLACED 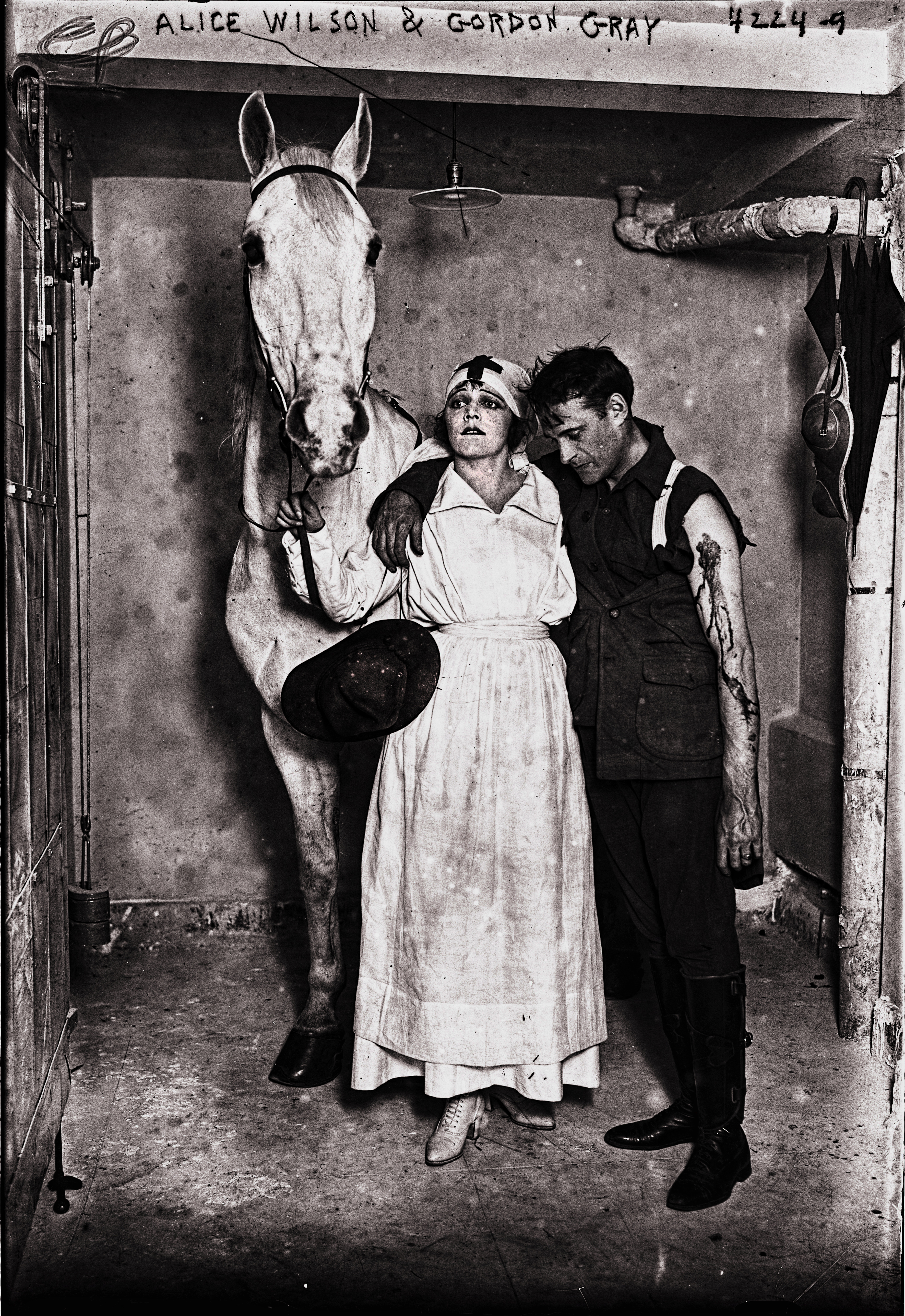 In waters off Chicago the 1901 race for the Canada’s Cup is on, and judges on board the yacht Pathfinder are recording the progress of its history. From a distance, a man with a black curtain over his head watches the racers as they move upside-down across ground glass in an apparatus belonging to the Detroit Photographic Company. Between it and the boatload of judicial sportsmen rides another craft, the U.S. Revenue Cutter Morrill, and off Morrill’s quarter can be seen one of the yachts competing for the cup, the American Cadillac of Detroit or the Canadian Invader.

On Morrill’s lower deck some sailors have grouped themselves into a pyramidal composition signifying youth and eagerness. Over the course of the century that is beginning around them, their pose will be restruck again and again, in posters and movies and wartime photoessays in a magazine that will comprehensively call itself Life. As of 1901, however, the sailors and their way of being in the body haven’t yet become a cliché. Just now they are only angled over the rail that way because they want to see the race. Immediately influenced only by the physical law that prevents two objects from occupying the same space at the same time, the array of sailors’ bodies immediately communicates nothing more than subjection to force. During the open-shuttered instant of that communication, the sailors’ entry in the historical record need be read only innocently. 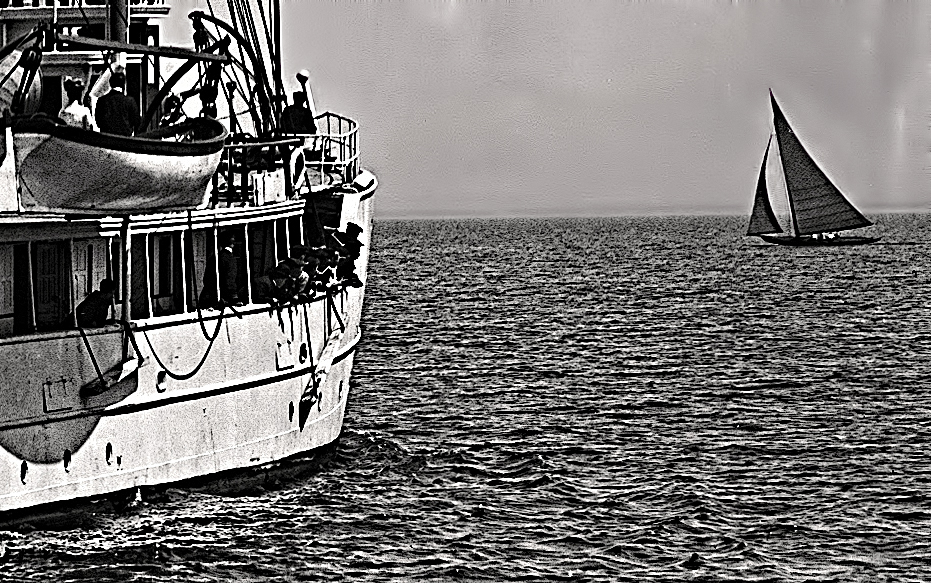 Innocence also seems to govern the rest of the image. It’s an image of events unfolding by game plan in accordance with a kind of prehistory, but during a single instant in 1901 a shutter opened and closed on the sequence and demarcated it from time. The shutter was open for only a fraction of a second, and when it closed it separated the time now secured in the camera from time’s slow accretions of win and loss, closure of the record book and judgment, good and evil. 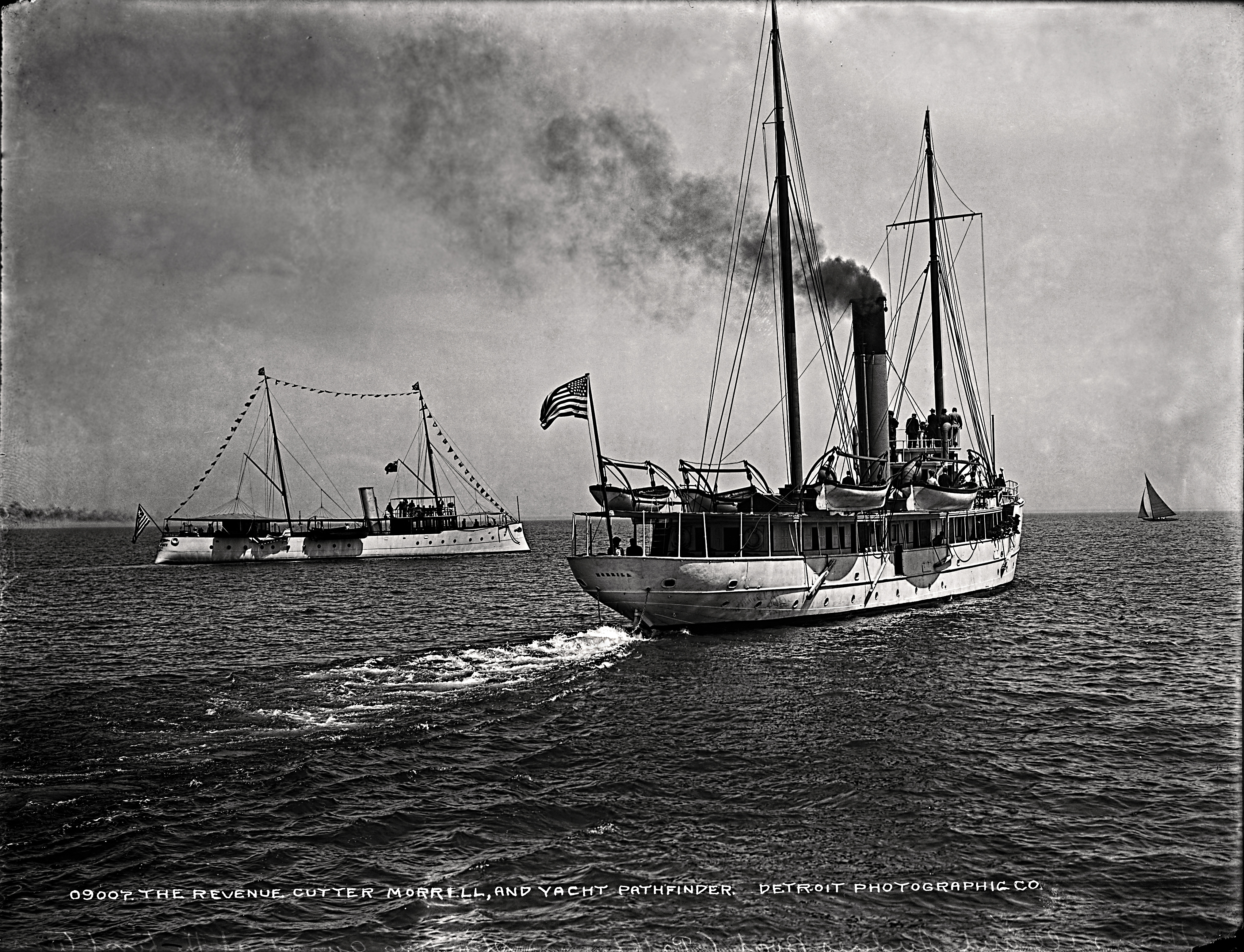 Here, then, during the innocent instant before the close, the judges on Pathfinder are executing historiography under a pair of delicately rigged awnings. Atop Morrill’s bridge ride more observers of the yacht speeding from right to left across the negative. These observers, three civilian men and an officer, are depicted in costumes and body language connoting a dignified connection with the boys below them. Filled full with its boys and men (and, by my count, one woman), Morrill displays itself to the light under some such name as “diorama” or “microscosm.” In the light, before the camera that has been waiting for it per plan, it models a life as regulated as the universe. Black smoke tumbles from its funnel and a white wake streams behind. Inside the white hull, men we can’t see are busily at the boat’s work. Outside, the Great Lakes’ waves are their customary tidy selves. On the shore of Lake Erie a month later, the President of the United States will die at the hands of an assassin and a team of surgeons, but here on the water of Lake Michigan this August day, everything that the camera is capable of recording appears shipshape.

However, this particular shipshape happens to be blemished. Click the image to enlarge it and you’ll see: at either end of the line marking the horizon, somebody in 1901 touched the image’s gelatin matrix and marked it with the print of a finger or (I’d guess, as I think of the surgeons probing President McKinley’s abdominal wound with ungloved fingers and then try to visualize how a man in 1901 would hold a wet 8-by-10 inch glass negative) a thumb. The cute little freshwater waves, the tumbling smoke, the pretty boats, the eager young men, everything that filled this fraction of a second of the Detroit Publishing Company’s place in the chronicle of 1901, were intended to fill a sheet of hard transparent permanent glass to overflowing with photography, from margin to margin, instantly. That instantaneous filling is the unique trait of being in time that Emily Dickinson realized on behalf of photography when she said, “Forever is composed of nows.” But here a pair of thumbs has come blundering into the forever, birthmarking the glass with two smudges left by the not photographic.

You see what a problem that is: the thumbs have become a permanent, physical part of a conceptual record where they don’t belong. The record was intended to immobilize time forever in a realized idea of light and shadow and silver halide crystals. Then, however, two thumbs supplemented it with the illiterate X-marks of life. More, and something terrible: those marks are now as clear and as permanent as anything on this plate that was recorded by the camera. Made hard and historical by the chemistry of fossilization, they require us to see them in the same way we see the boats and the waves. But they can only be seen. Unlike the images of the boats, they can’t be interpreted because they aren’t a part of any record. Off the record, the only power they possess is the power to remain silent in the face of question, communicating nothing. As Wallace Stevens observed of the guest of honor at a funeral,

The Chicago Tribune’s record of the Morrill event is less a photograph album than a sentimental movie in two scenes, segueing from a captain yelling on his bridge to a yachtsmen’s chorus singing “Hear, hear” back on land. 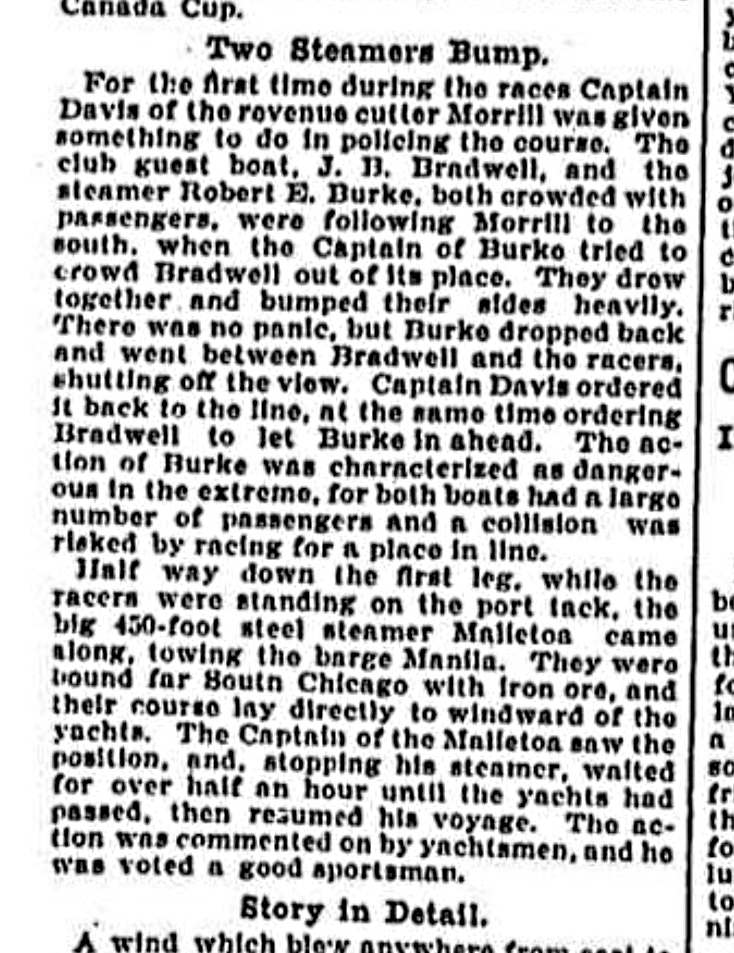 The ability to segue is what enables a movie or an epic poem to turn what is seen into narrative. Photographs and lyric poems don’t command this power to create sequence and story. Because they are unmoving amid the flow of time, they can do nothing with remembered events but illustrate and exemplify. But one August afternoon in 1901, a blemish moved itself so far into a photograph that the photograph took on the blemish’s property of warm, soiled life. Its glassy image has been tainted ever since by life’s grease spot of the mortal.

You could call that a spoiler alert. It gives away the surprise ending in which a photograph turns into a story.

From the archive of gaze: the address to posterity, the notebook preparing the archival entry, the spectacles anticipating the achievement of S. M. Eisenstein, the pistol in the pocket. Subject of the archive: the presidential election of 1908. Source of the image: George Grantham Bain Collection, Library of Congress,  http://www.loc.gov/pictures/item/ggb2004002184/. Photoshopped. 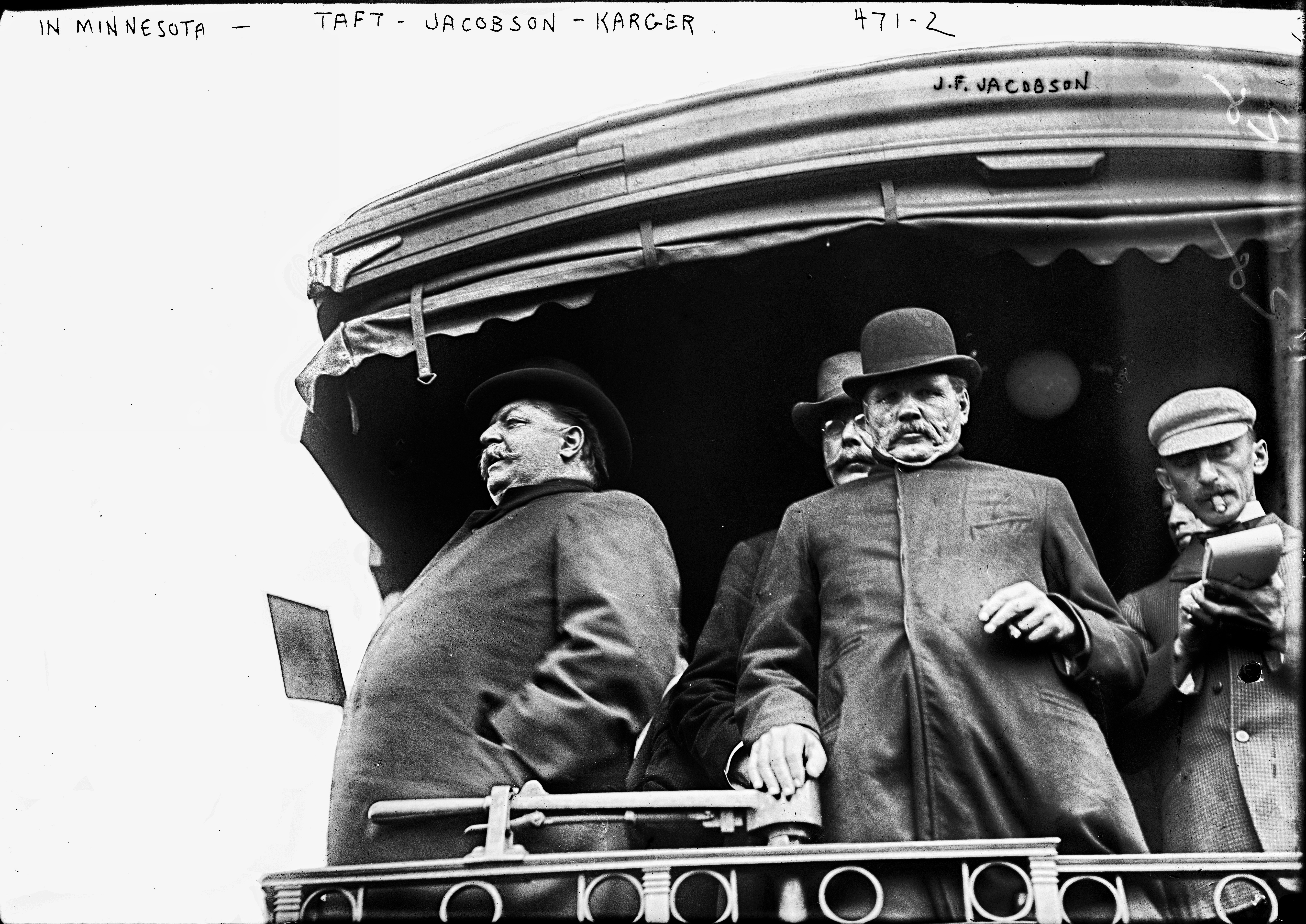 And a montage element bridged in from the textbook of comparative anatomy: 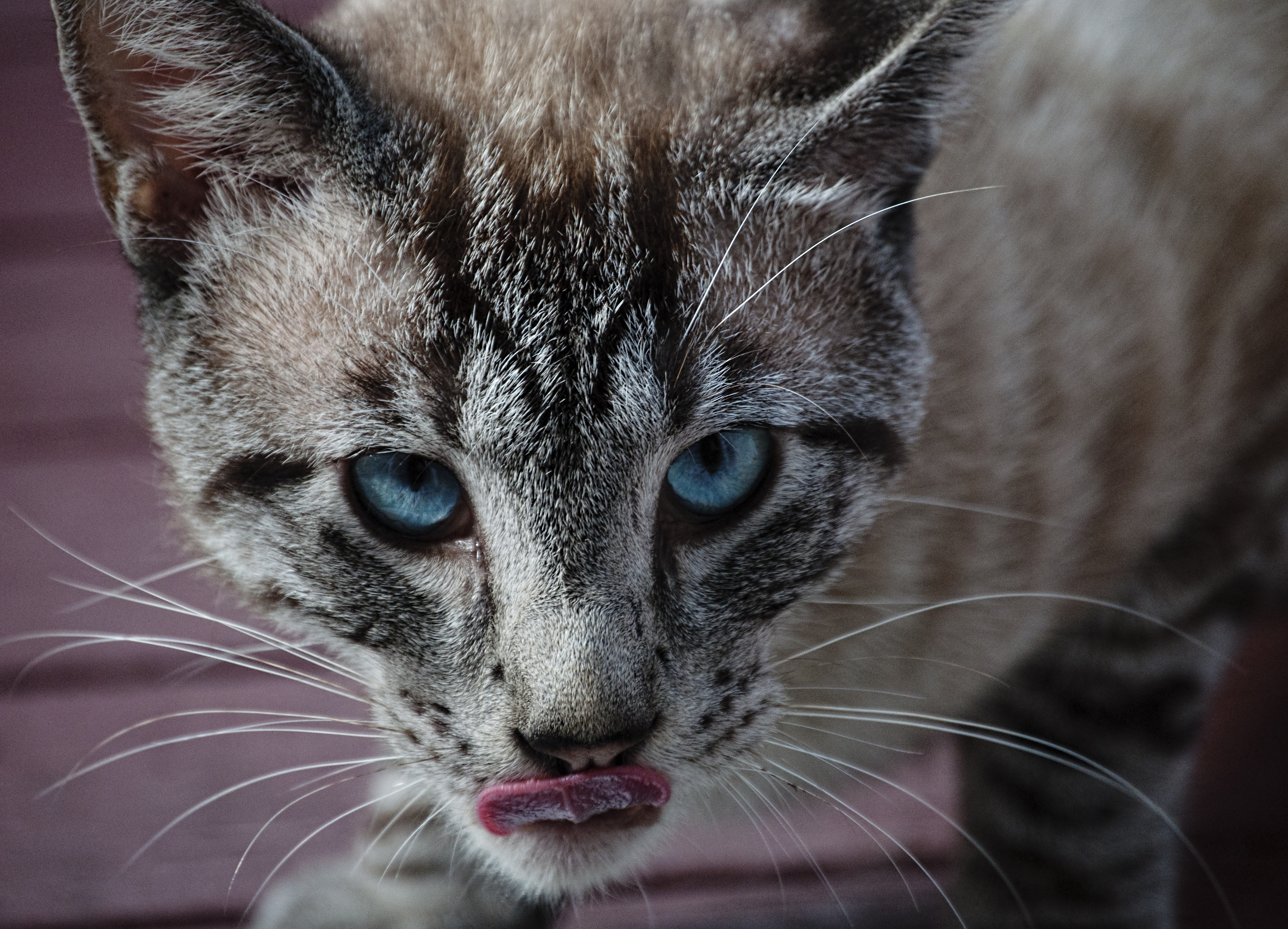 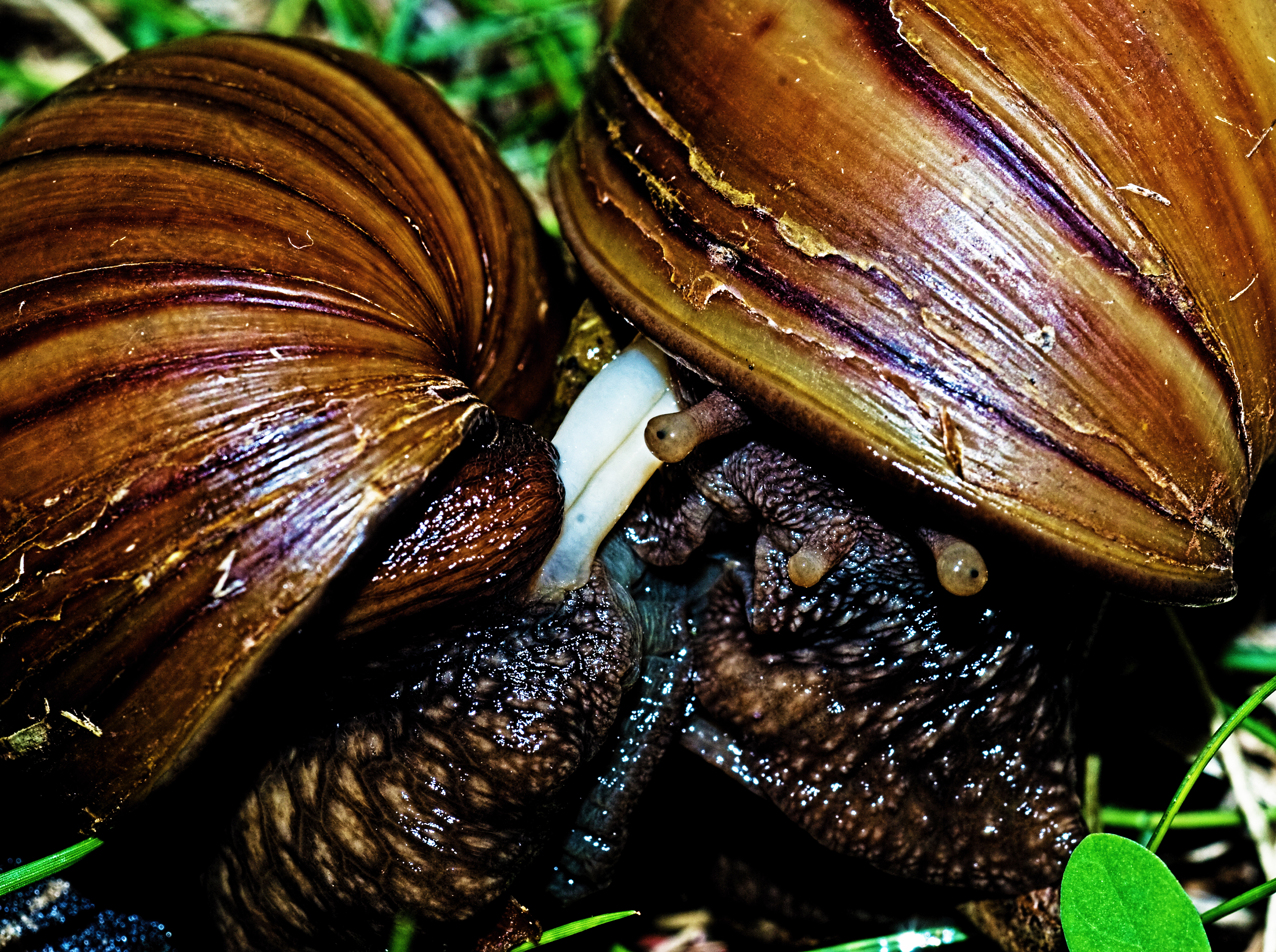 Source of the other game: lawn, Honolulu, Hawaii.