In a corner of an image

an incidental detail which includes a cloud of steam vanishes at the instant of its passage through time into memory. But thereby it entrains itself in forever. 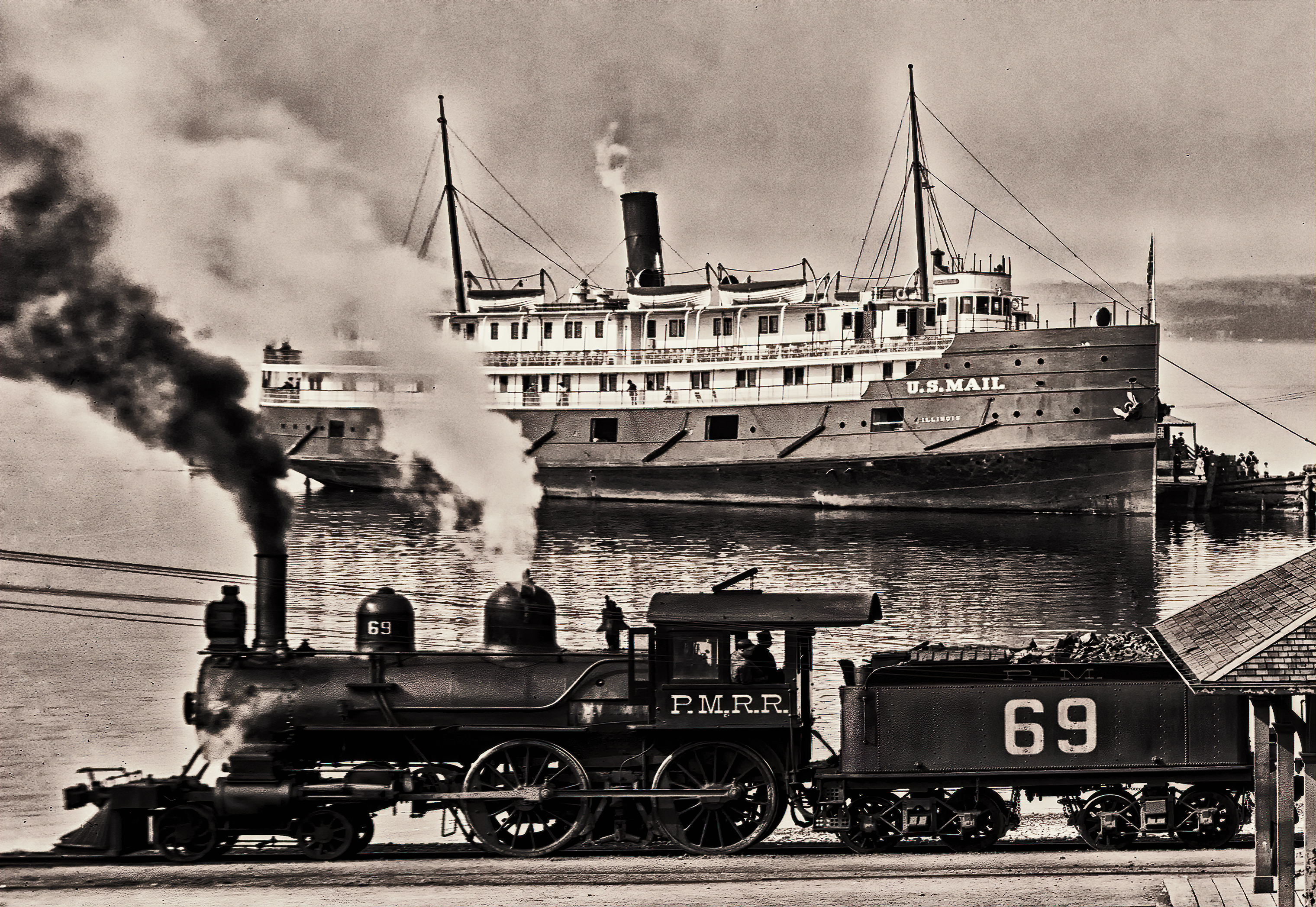 During the nineteenth century, coal and its no longer latent powers began mattering to art and literature. Having been perceived and depicted, they now demanded equal but different rank with the divine. To realize Anna Karenina’s feelings during her night passage on the Moscow-St. Petersburg express was the same problem for Tolstoy that it would have been for Homer, but it was only Homer’s routes that traversed a universe conceivable as a surface hiding no secrets and revealing all there was to reveal. Against that, the moment at the end of Anna’s emptied book when a disconnected fuel tender came rolling by itself down its track (VIII.5) was a revelation of movement without a discoverable origin in intent or terminus in meaning. It may have been that that extorted the last tears from Vronsky. His voyage of discovery had ended without conclusion, in smoky midair.

See how you yourself now perceive this silhouette of eleven womanless men and a danger sign. Inside their collective image, smoke from a waiting parovoz ascends to darken the cloudscape, and that seems to be all the meaning there is. Certainly no one within the artwork’s dark margins is reading the sign’s words.

Signed at under such circumstances, lesser realists such as William Dean Howells and Jacob Riis reacted by filling their non-fictions and their fictions alike with brand names and street addresses, recorded with due accuracy. The intent seemed to have been to force signifiers like the railroadmen’s unread X to give up a meaning. In time, James Joyce came to understand that a record’s significance lies in its words, only. The data of its ostensible content are a pre-text, and that is enough. But the image you have just seen in parallel with Tolstoy’s words is a wordlessness. Its primary signifier is not a history like Tolstoy’s or Joyce’s but a chemistry and a meteorology, and its record is only one of the smudges that coal in the nineteenth century left in the air.

You may be able to see that the state of this image in the Library of Congress is a photographic print mounted on a paper backing, with the library’s acquisition stamp overlapping both sheets.

But you also do see that the composite photograph has lost definition and contrast. On the record, it has been going lost. With the aid of a computer, sight can begin bringing it home again to history and making the record’s words as readable again as they were when they flowed from the pen of A. P. Yates in 1893. Over the image, however, a gray new computerized disfigurement has settled in and begun blemishing what you see of the New York Central and Hudson River Railroad’s engine no. 999, claimed to be the first vehicle in history to have reached a speed of 100 miles an hour. 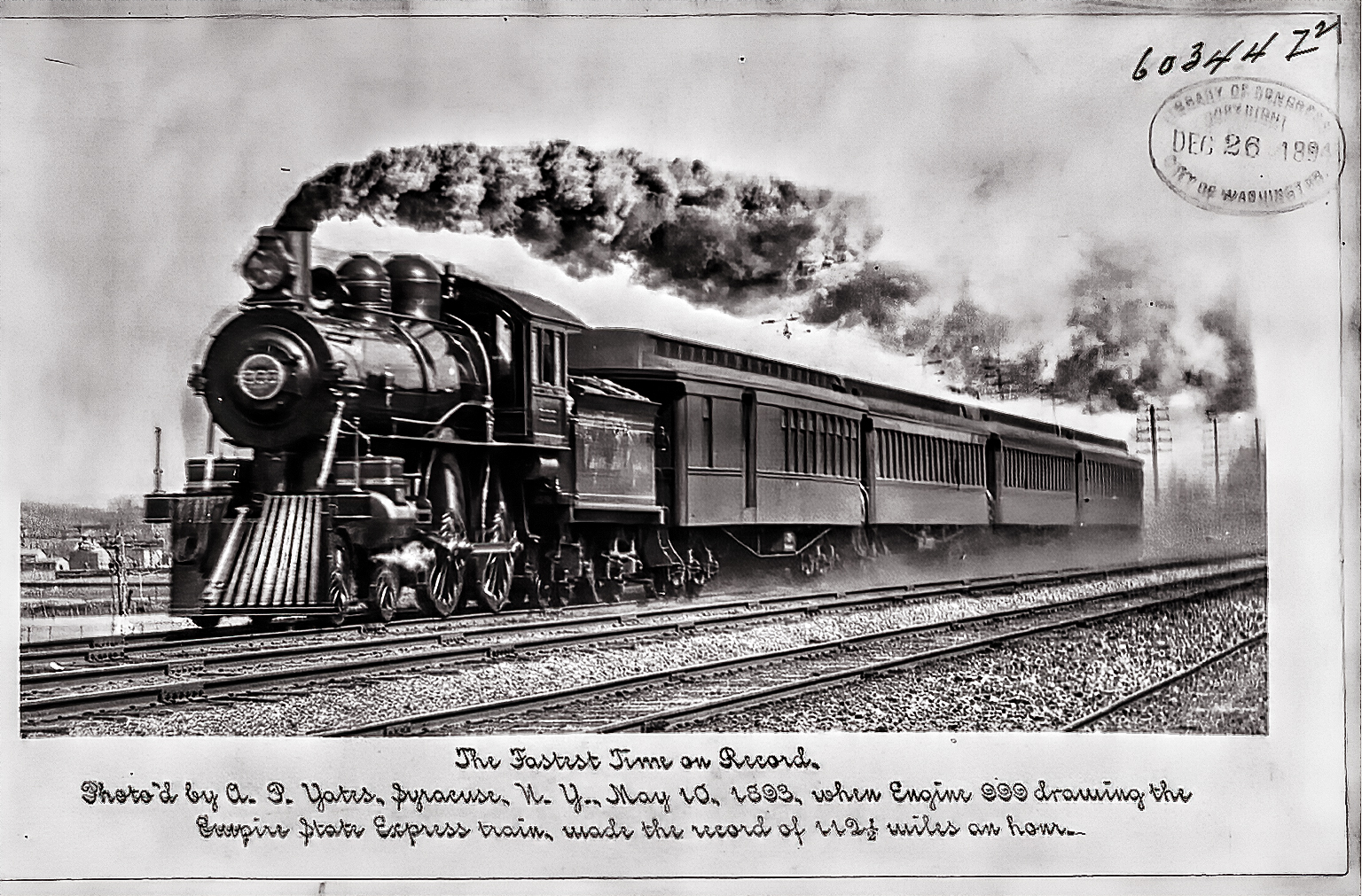 In the library, a history of photography can help you understand what happened. In the 1890s, when negatives were large, photographers often retouched them with carmine paste. Painted over dark areas of the negative, this lightened the corresponding area of the print. Perhaps because May 10, 1893 was a cloudy day in Syracuse, or perhaps because the smoke from no. 999 was billowing too abundantly into the air, A. P. Yates encarmined a zone in front of and above no. 999’s boiler. On the print, that would have whitened the sky. But Mr. Yates didn’t want to risk whiting out any of no. 999’s beautiful metal, and so some of the original crud of 1893 remains in his artwork as a dark, angular halo.

With a computer under my hands, however, I can become Mr. Yates’s 21st-century continuator. Using a process that Photoshop calls cloning, I paint more carmine over the dark original of May 10, 1893. 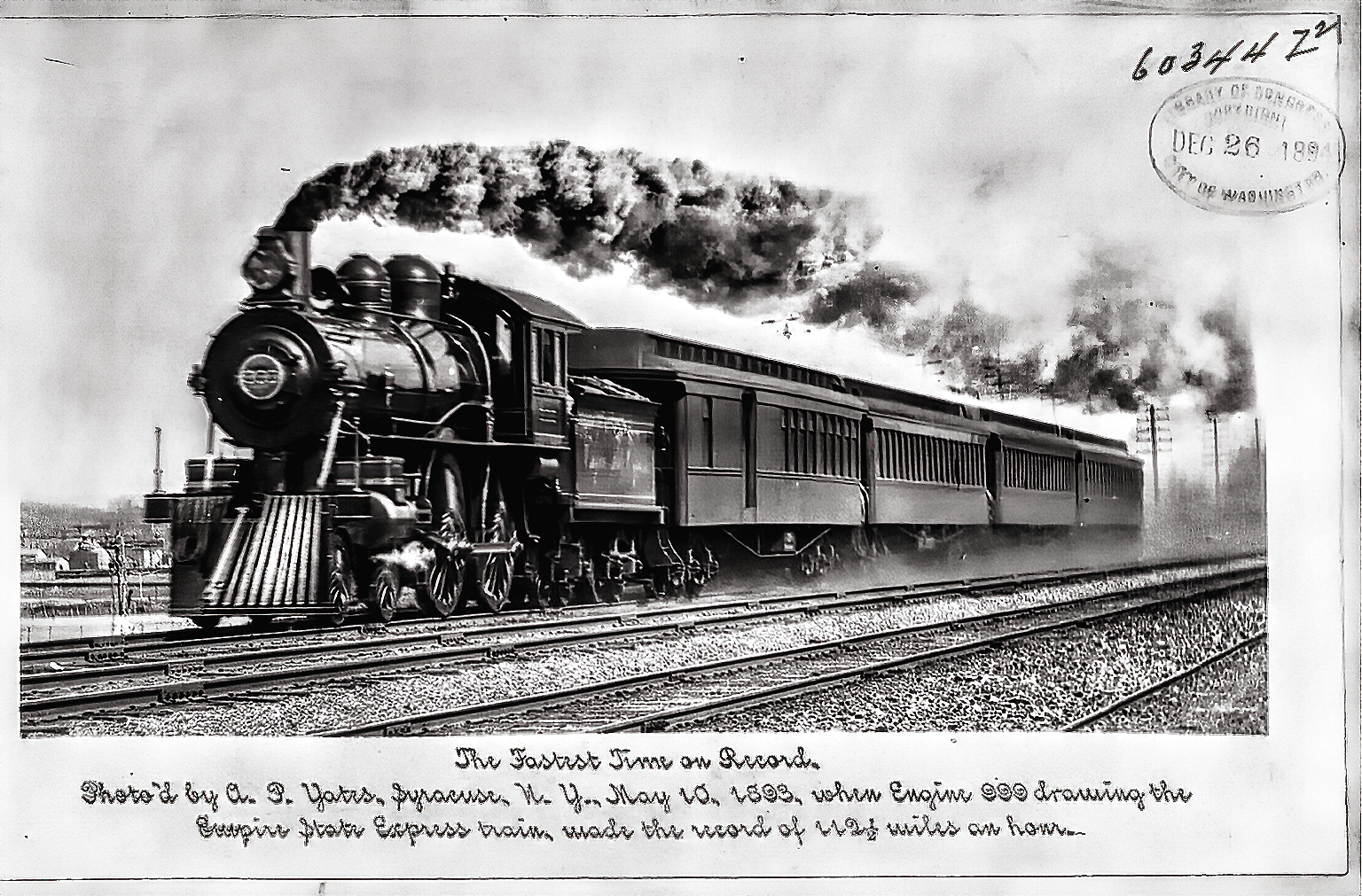 And see: I have replaced the last trace of history in the image with the truth of art.

Think of me as a Venetian barber in a time of cholera, doing a little cosmetic work on Gustav von Aschenbach to make him attractive to the teenage punk who happens to be the god of history. of 1910, which is less a time than a world which fully contains her life, giving it a body and clothes to shape and color it. 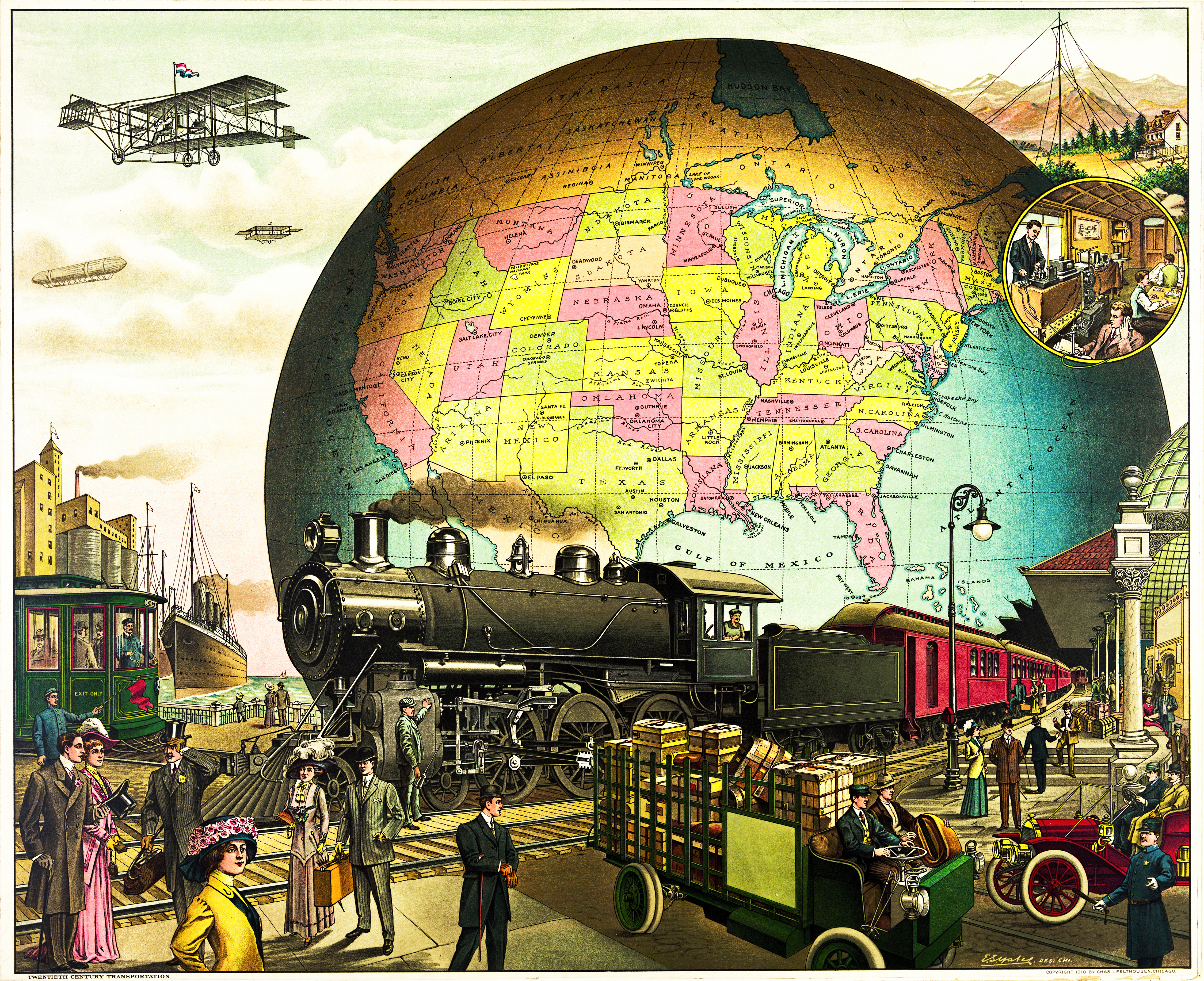 Once, in the age of steam, perspective moved through space like an engine and generated a postcard. In there, along a diagonal, it erected a high-sided chute and spilled into it some Italians whose arms and legs were movable in promenade gait. Per design, one of them also functioned to create an additional sense of motion in haste: his blazer buttoned backward, his flyaway hat just recaptured, his feet at trot, his pants rippling. Swinging and pivoting along minor axes, he serves the postcard in the capacity of a small extra part, jiggling. To be so close to this detail that you see what the machinery is doing to it is to receive the postcard’s communication that a man once lived a moment in the wonder of the present tense.

In the present tense, emitting sounds of small talk and chugging steam, the machine that is the mailship König Albert comes toward you, then moves past on your left. Where it was for a moment, the horizontals of the composition’s right side slide left and refill the postcard with vacancy. A moment after a shutter closed at some time between 1899 and 1914, the sentence in the present tense was over and König Albert passed into what is not yet and never again will be picture. 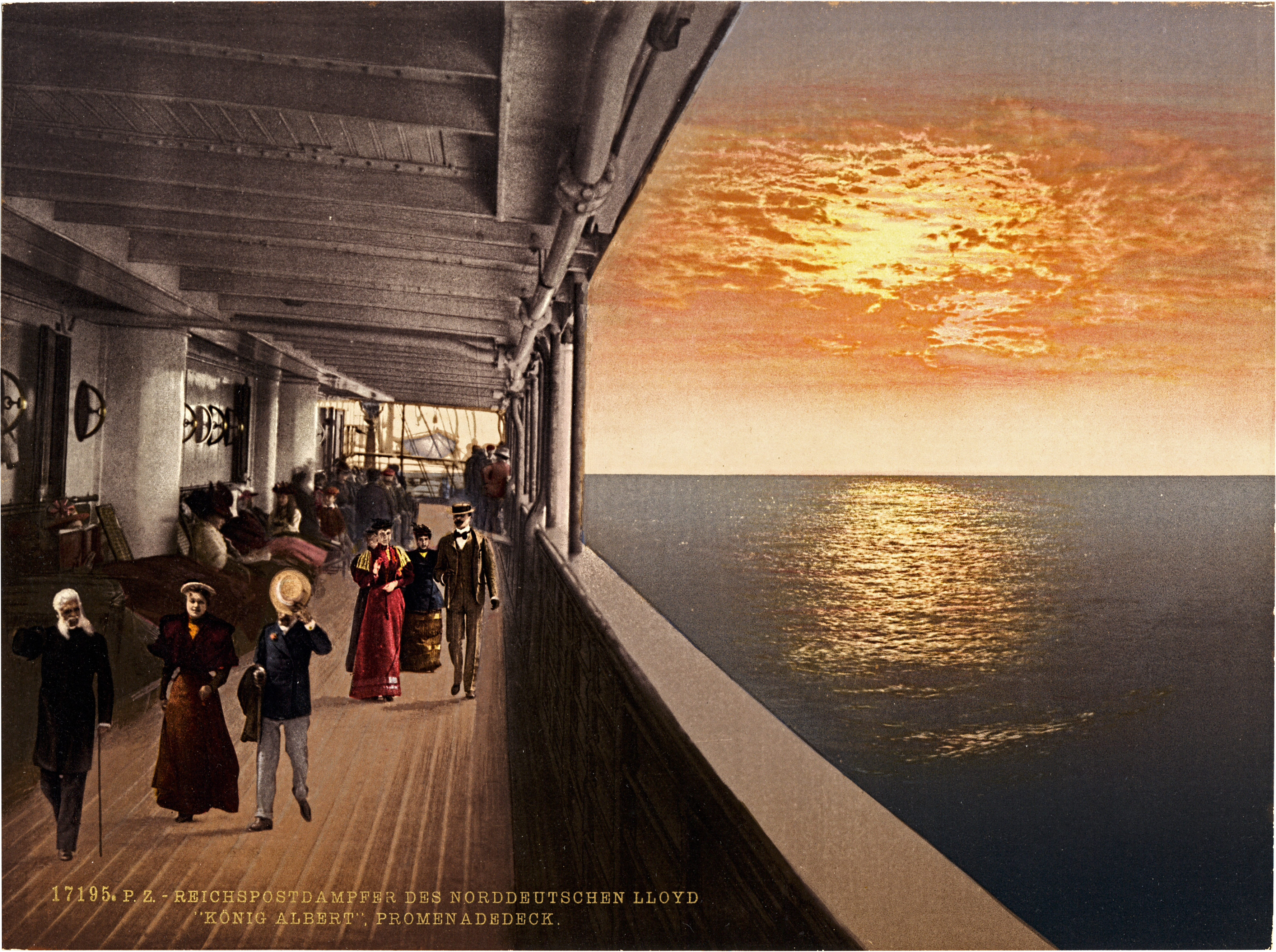 Source: Library of Congress, http://www.loc.gov/pictures/item/2002720829/. Photoshopped. According to Wikipedia, König Albert was in service for North German Lloyd between 1899 and 1914, after 1902 primarily on routes between Italy and the United States. 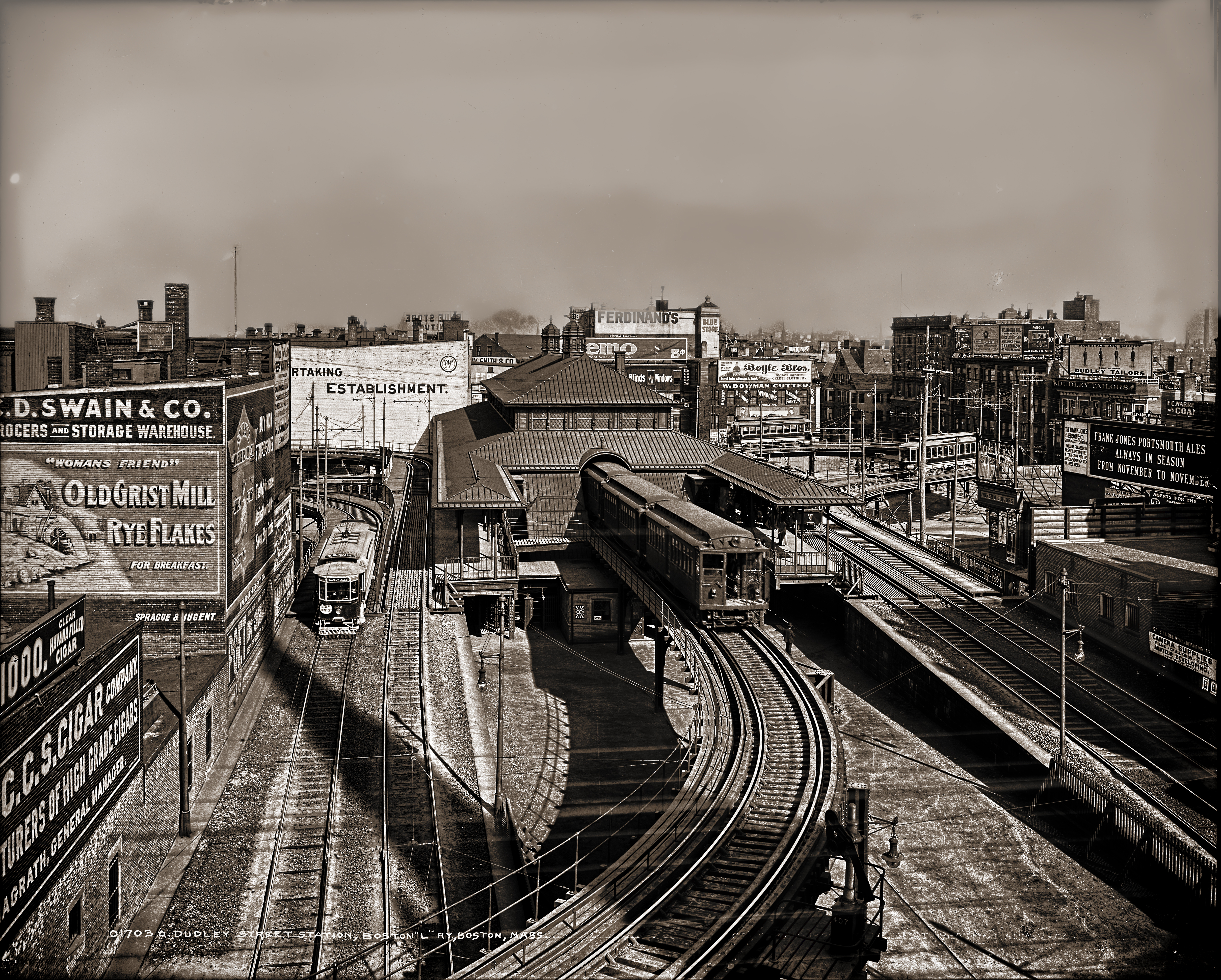 This memorandum about Bostonian style is copyrighted 1904, but in its right half it advertises some plays that opened in Boston in the fall of 1903: Lady Rose’s Daughter in November, The Earl of Pawtucket and A Hot Old Time in October. Elsewhere in the image are more equivocations. In the elevated train rolling through the Dudley Street station the motorman’s window is open but the passenger windows are shut, and at every point within the composition’s frame the sunny air is full of winter smoke. See how it is hazing over the sign atop Ferdinand’s Blue Store. You conclude these observations by making a weather report to yourself: Indian summer.

But every human image is reported in Indian Summer Time. If we could hear the words in the mouths of the pictured dead, the communication would consist only of gossip about that light-filled pause in the oncoming darkness. Its words would efface themselves as they reiterated their gossipy promise: “I must be going.”

But the words in the mouths of the dead – say, the dead half-lighted in this image: the group of women with a little girl in a big sailor hat, the man standing by himself down below – are not to be heard, even by the dead themselves. On Dudley Street in 1903, the dead were surrounded by walls covered with words addressed to them, but the instant those words became part of a photograph they became part of a foreign language: a language comprehensible only outside the image frame. On a low wall in a corner of the domain of the dead, its imaged advertisement for photographic supplies and processing is still decipherable, but it is no longer readable because to read is to enact a coming to life of meaning in a living mind. Because its text is addressed only to the dead, the photographic advertisement can no longer be anything but a photograph. We can’t read it; we can only see it. We are not yet in the picture. While Indian summer lasts, we are too alive.

You pick up the photograph and warm it in your hand. It depicts a noisy flock of electric railcars ringing and grinding their ways along steel. It is a historical proof of deducible noise, but it communicates that idea (“Noise! If you can’t hear it, feel it through your fingertips!”) only to the insensate dead. The Indian summer that it records has sunken fully into its no longer photosensitive surface. Its silvered paper integument has become the weatherproofed chronicle of a now silent season.