As the Pence administration prepares to take office and the Trump family moves into the East Wing to assume its function of counsel and control, literature offers a counterpossibility.

But it’s science fiction, on paper cheap and unlikely to endure. 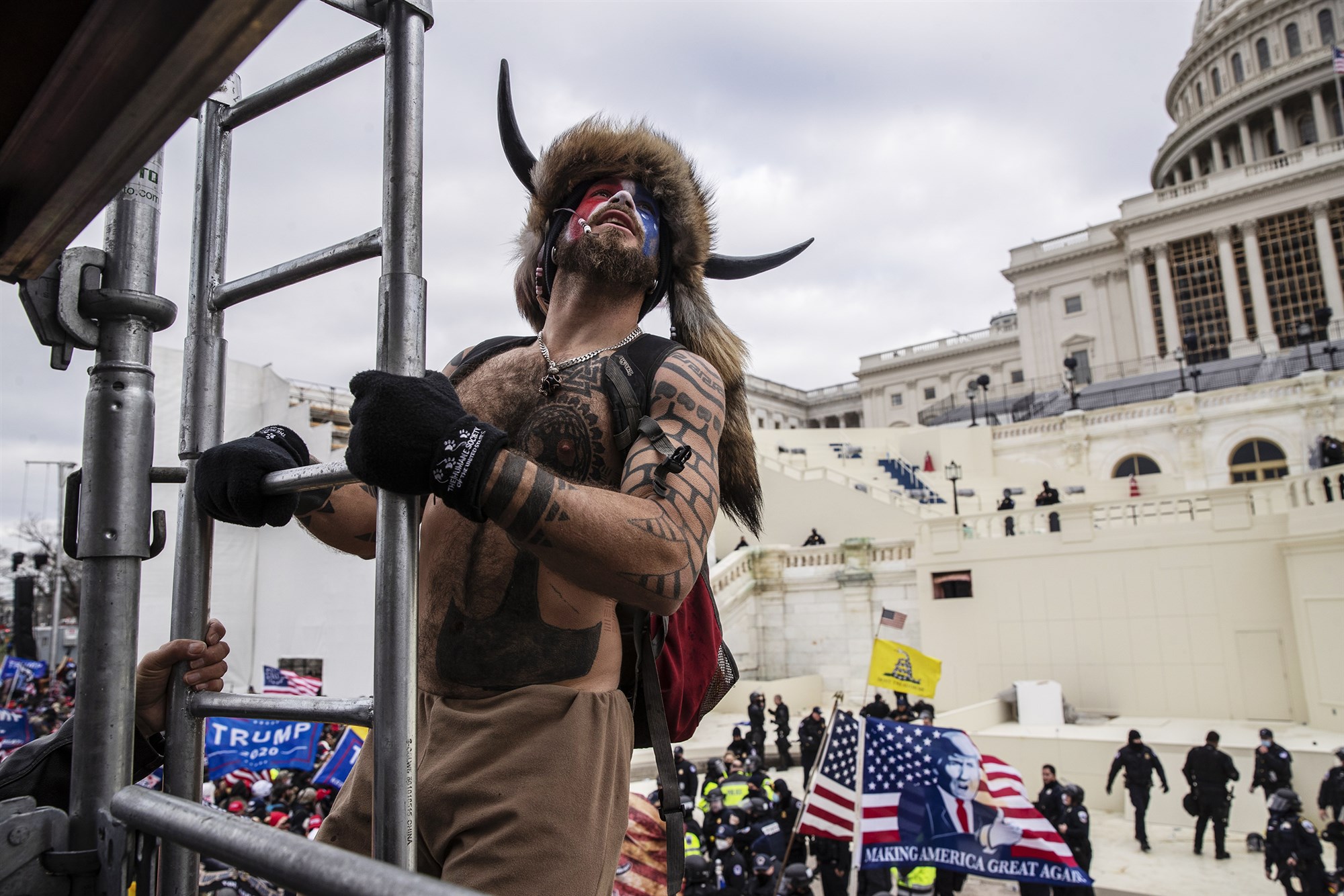 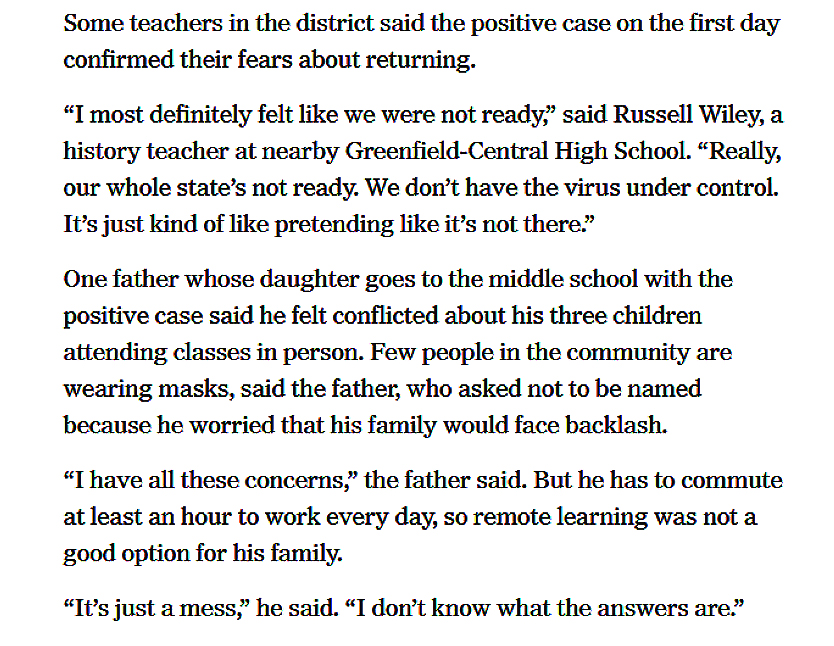 See how the right shoulder vanishes! 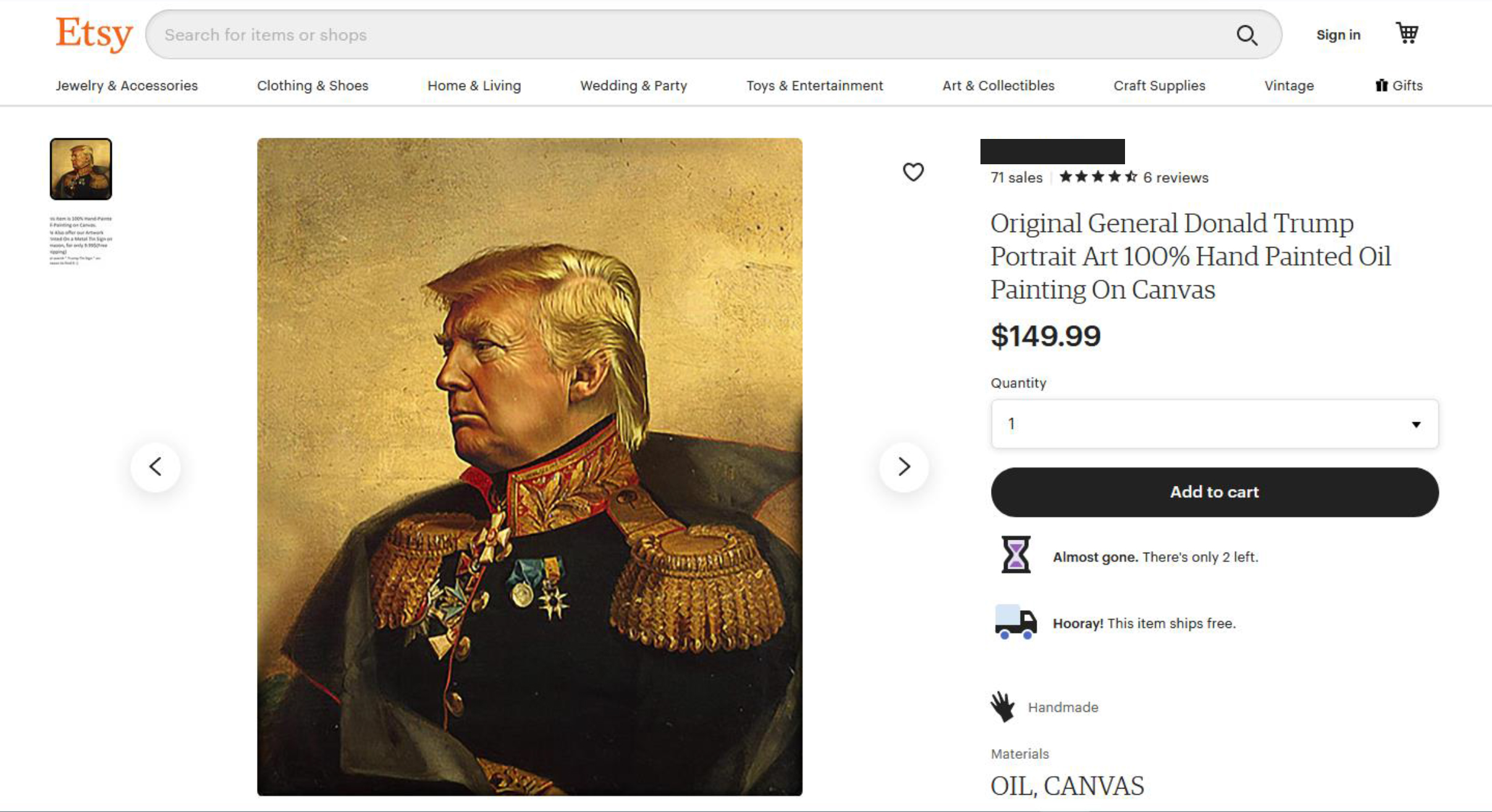 After you open the envelope, you learn that the missing words are “request” and “for.”

Within, at the foot of the letter of request, the font for Mrs. Trump’s signature is identical to the sawtooth felt-tip glyph generated for her husband. The letter’s text, however, in accordance with the half-whispered, breathily intimate voice of us-girls etiquette (what Stevens called “the beauty of innuendoes”), is dated “Friday Morning.” In accordance with the precept taught by Dale Carnegie’s How to Win Friends and Influence People in the 1930s and followed ever since by every coach of every sport in the United States (“Fred, we came here to play foobaw, Fred”) it also uses my wife’s first name, Haesun, as the first word of at least three sentences. Just keep addressing people by name, says Carnegie, and you’ll make the sale.

During the George W. Bush administration, a legal defense of the Central Intelligence Agency’s use of torture was crafted by John Yoo of the Department of Justice’s Office of Legal Counsel. In those documents, one of the rhetorical strategies was what conservative theorists call textualism. Copying and pasting a phrase here and a phrase there from a bookshelf of dictionaries, Yoo redefined the term “torture” so narrowly that the sounds generated in the agency’s torture chambers became formally inaudible to the hearing officers outside. By definitional fiat, the screams were pre-erased from any meaning comprehended by law.

If the idea of erasure should also contemplate the verbal signifier “Pay to the order of,” the words “Check enclosed” inscribed on an envelope will become an anti-significance. In general, all it will take to enroll such an anti-significance in meaning is erasure of its context. You may think that the words “Check enclosed” mean “A check is enclosed,” but to a grammarian of the anti-contextual, that only shows you don’t know your nouns from your verbs. Actually, as the grammarian will inform you, you should have ignored the enclosure and read only what was marked on the envelope. Only the envelope words “Check enclosed” were subject in the moment to the act of reading, and if they are read in that rigorous way, without regard to context, they are equally likely to signify either “A check is enclosed” or, on the other hand, “Check the enclosed.” The grammarian will be eager to explain the theory of erasure of distinction to those who have read the envelope, and her eagerness will give the lesson a social context. It will unite the grammar joke’s words with the grammar joker’s laugh, giving them a complementary intelligibility in the verbal and the human. Responding to the unspeakable yearning to understand and be in on the joke, Mrs. Trump explains with laughing assurance to my wife, “Haesun, I know you realize how much is at stake in the upcoming Presidential Election. We simply cannot let the Democrats win the White House and set the stage for them to capture total control of our government so they can enact their Big Government Socialist programs.”

Both the assurance and the laughter are warranted. Check the lady-words like “Friday Morning” and you’ll see: the stage is already set for the joke and the envelope really is empty.

Marlowe, of course. Caravaggio, of course. Gauguin. Rimbaud. Rilke and Brecht; Dylan Thomas and Robert Lowell; Alexander Alekhine and Robert J. Fischer; Francis Bacon and Lucian Freud. Indifferent to moral convention, some artists live as if they are beyond good and evil, and we who live by the light of their art sometimes accept their claim. We may not credit it as doctrine, but we take it in by eye. The artists’ biographies may ask us to disregard and stop reading, but we keep looking at the pictures.

Of course biography will sometimes direct us away from itself to matters of life and death. Handsome bad Byron had a weight problem throughout his short life, and if he had only lived long enough (nags biography, poking us with censorious finger) he might have developed into a double of his obese, card-playing king, George IV. A book about those later years, supplemented with additional pictures of the former poet, might disenchant. Nevertheless, Don Juan would still be standing by to dive into the biography and recover the life. Its comic rhymes would have the agility to keep meaning, nevertheless! what they sang for the first time over the tomb of their creator’s flesh. In words and music, they would be one more performance of life self-creating.

Two centuries after Byron and one month after the American presidential election of 2016, Sotheby’s posted news in France of a rarely seen painting created in the nineteenth century. The artist was the Christian allegorist James Ensor, he of the masks, and the election marked a change of aspect for the United States. What was to create the change turned out to be a rolypoly daubed orange, but Ensor had titled his composition Squelette arrêtant masques and Sotheby’s catalog took note of what it called its chromatic qualities.

By 2019, state and church in the United States were beginning to slap images of Rolypoly over the previously polychrome icons of the Christian trinity. By then too, however, the Christian masks of James Ensor had begun to receive and transmit again. As they filled with light for almost the first time since their creation in 1891, something they had concealed behind themselves began intimating itself once again against a re-illumined sky. Almost ready now to reveal itself above its Ensor-blue surface, it seems to be summoning the creatures within the image frame and us other creatures outside it to open our eyes and understand. Its name is Squelette, it wears the colorful uniform and livid mask of death, and it comes wavelength by wavelength into our lives to say that we can enter and see the full spectrum of ourselves only by unmasking. 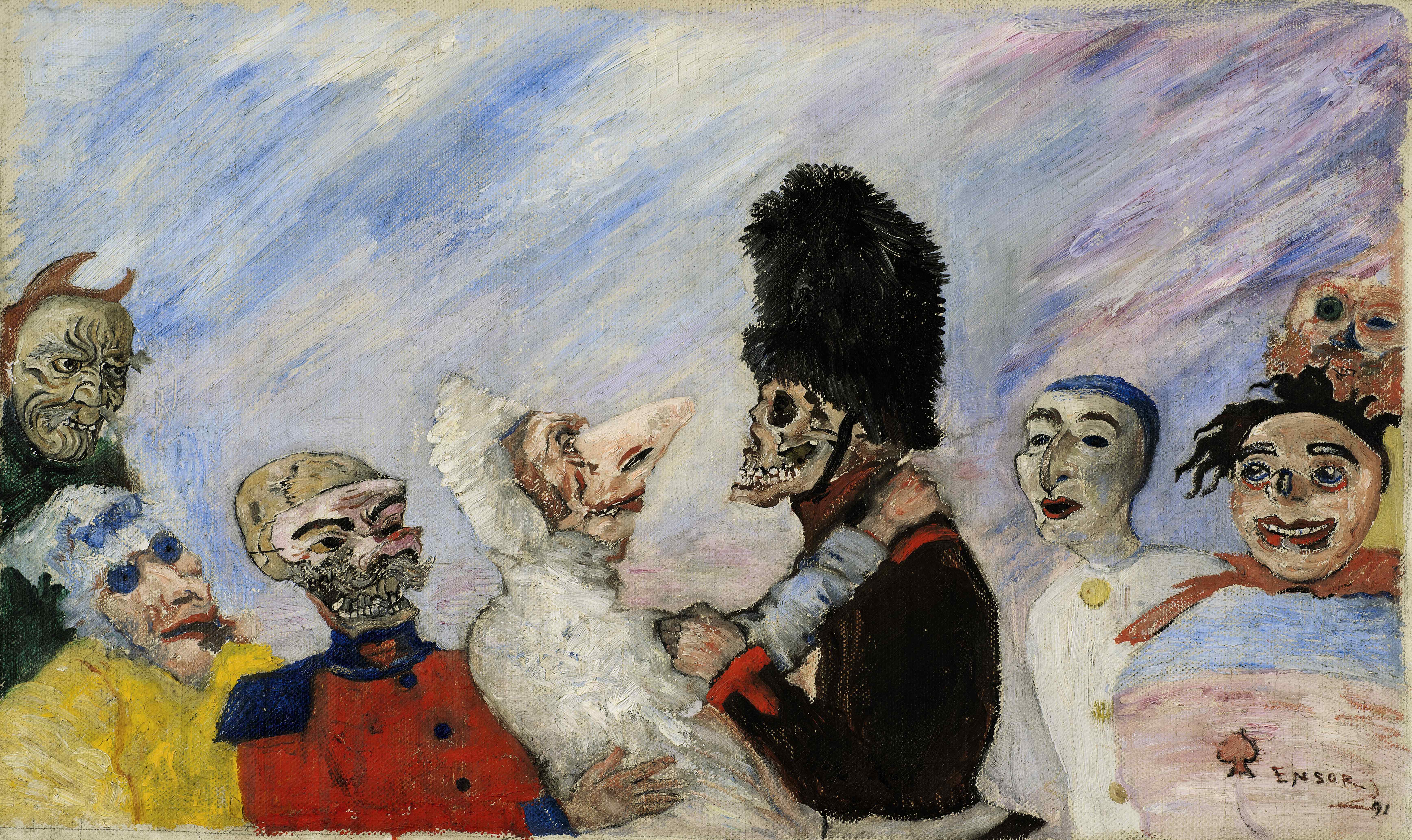 For on the breast of one of the masked is the image’s warning to us not to delay the unmasking: a death-symbol ace of spades, overlaid with a mask of rolypoly-color. No longer the black of pious mourning and its “sure and certain hope,” it threatens the masked with a sentence of eternity in livid terminal bronzer.

On December 27, 1933, as the Third Reich approached its first anniversary, The Nation published a letter of political protest. The policies being protested weren’t Hitler’s; they were The Nation’s. Wrote the author about the magazine that was publishing him: “Its insinuations that the new leaders [of Germany] are men without conscience — in short, cruel, inhumane, selfish, and even immoral, lacking even one redeeming characteristic — I resent.”

Six and a half years ago, when I discussed that letter on this blog, it seemed obvious that its author’s expression of resentment was meaningless not just factually but ontologically, as if it were a contradiction of its own language. The word “resent” was so totally wrong in its ghastly historical context that it was almost funny. Obviously (it seemed to me in 2013, during the Obama administration), whatever The Nation had opined in 1933 about Hitler must have been provably right — and the proof was in the protest. If a Nazi sympathizer resented someone calling Hitler cruel, the a priori case was that Hitler must have been cruel. But how strange it is to say “cruel” in 2019, when the c-word has changed from a term of disapproval to a term of approval, like “fuck” in the mouth of Lady Chatterley’s lover!

So here, if only for its antique-store curiosity, is my post from 2013.

I reread it yesterday because I’ve learned some new details about its contents, and these are now incorporated in the text. But the text as a whole now seems beyond revision, doesn’t it? I wrote it in the American English that was current in 2013, and as of 2019 that language is becoming incomprehensible. It is a dying language: victim of its writers’ will to cruelty.

An American regional pronunciation, normative in areas that are characteristically conservative. Here a Midwestern politician says it in the 1970s.

Another regional pronunciation, but with connotations of class contempt. Across the United States there are many towns named Washington, but only one large city — the city that happens to be the nation’s capital. By spelling out that city’s name in full, the speaker implies that the extra detail is necessary for people like his interlocutors and him: members of a linguistic community in possession of a comprehensive Heideggerian knowledge of the meaning of all the other Washingtons: where and what they are, how they are.

Sound 3: The three-letter word that is pronounced with either three syllables (“Zionist”) or six (“uh Jewish uh person”)

For the gloss on that, consult

It also helps not to be unwhite.

For several days after this story broke, the reading was front-page news in the Star. The Star’s analysis two days later (March 4, pages 1 and 4) explained:

In all that time, the poet’s name never sullied the whiteness of the Star’s newsprint. On March 11, page 21, a reader complained:

Ginsberg’s own record of the event is the poem “Auto Poesy: On the Lam from Bloomington,” collected in his 1972 City Lights volume The Fall of America: Poems of These States 1965-1971. It mentions the “tower walls” of the Eli Lilly & Co. plant in Greenfield where I read the Star’s coverage in a break room,

and figured out the poet’s name,

and came with a sinking feeling to the realization that I was the only person in the complex who would know or care. About that, a line from Hart Crane’s The Bridge may have the grammatical distinction of being the only factually incorrect imperative ever written:

Come back to Indiana — not too late!

It is not possible to set foot too late in Indiana.