Says the poetry of Frost’s “Two Tramps in Mud Time,”

Only where love and need are one,
And the work is play for mortal stakes,
Is the deed ever really done
For Heaven and the future’s sakes.

Says prose, “Delicate muscles and nerves.” Says prose, “Your employer expects.” The prose words are embellished with a frieze of women’s faces in chiaroscuro. All of the women are what used to be called beauties, with a single descriptive adjective replacing the unmentioned names that their bodies bear outside the office. In the office, the copy spoken on behalf of their beauty says, “They are all enthusiastic,” but the collective expression on their faces seems not to.

Where this language prevails, who can afford to entertain the thought that need may enter into a marriage of equality with love? Only a poet; only a man to whom the thought of lightening the task of words would be experienced with a pang of loss, like a missed dividend. 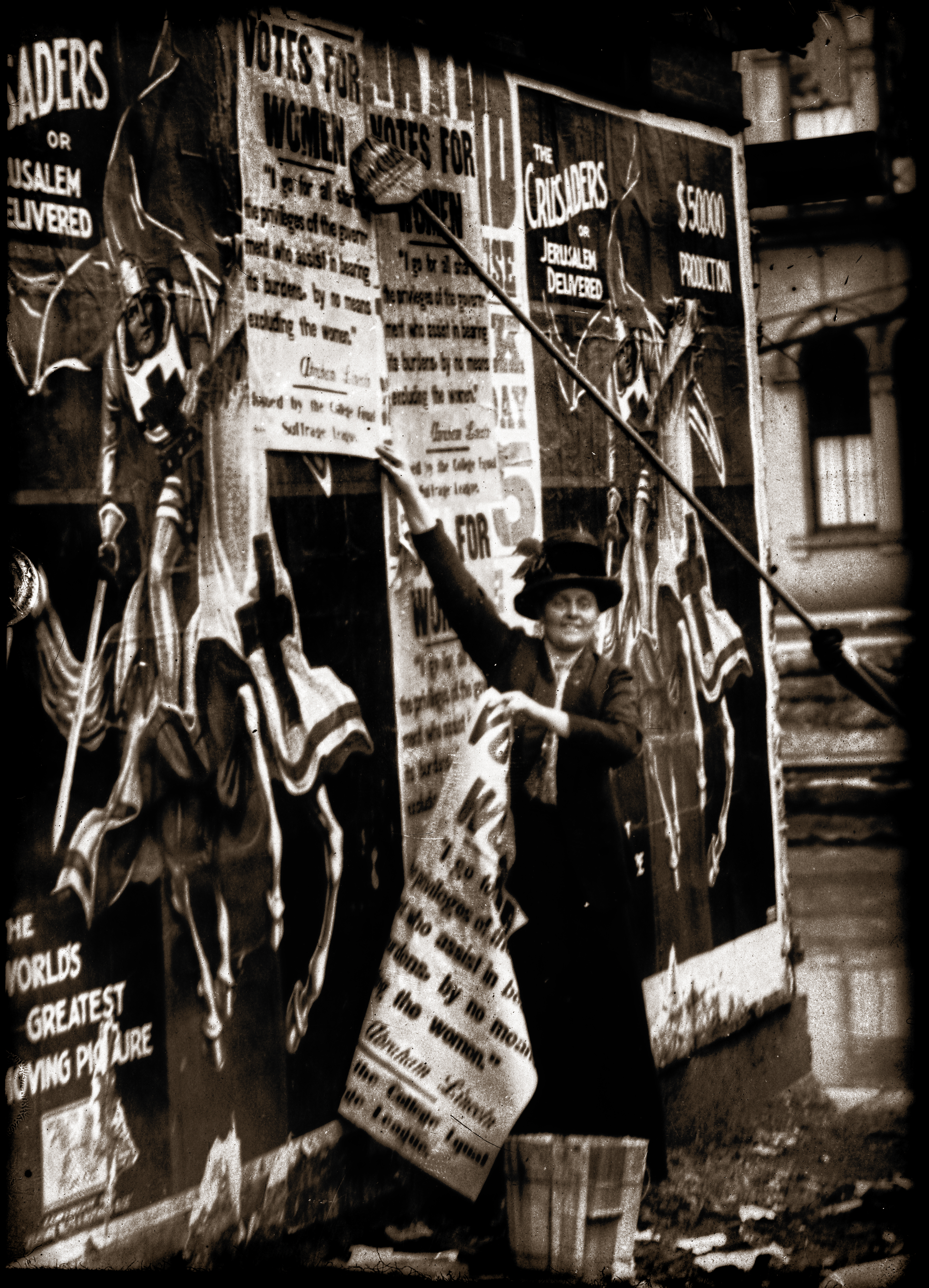 Source: “Suffragettes posting bills,” George Grantham Bain Collection, Library of Congress, http://www.loc.gov/item/ggb2004010578/. Photoshopped. The Library dates the image only between 1910 and 1915, but the Internet Movie Database, http://www.imdb.com/title/tt0175659/?ref_=fn_al_tt_10, lets us narrow the range specifically to 1911, when The Crusaders (an Italian movie based on Tasso) was released in the United States. In the course of the Republican primary campaign of 2012, the conservative policy intellectual Rush Limbaugh weighed in on Sandra Fluke, a Georgetown student who had addressed some Democratic members of the House in favor of birth control coverage under government-mandated health insurance. According to David Crary’s article for the Associated Press (Honolulu Star-Advertiser 3 March 2012: A3), Mr. Limbaugh told his radio audience on February 29:

About that, three language notes.

1. A septuagenarian myself, I remember the term “coed” from the 1950s. I don’t think I’ve heard it since then.

2. The OED traces the term back to 1893. From 1903, it offers an anti-Limbauvian quotation: “Any college where the girls are commonly called ‘co-eds’ is not a truly co-educational institution.”

3. For conservatives who understand that conservatism of thought entails conservatism of language, Burke’s “Reflections on the Revolution in France” offers this reassuring statement of faith.

I almost venture to affirm that not one in a hundred amongst us participates in the “triumph” of the Revolution Society. If the king and queen of France and their children were to fall into our hands by the chance of war, in the most acrimonious of all hostilities, (I deprecate such an event, I deprecate such hostility,) they would be treated with another sort of triumphal entry into London. We formerly have had a king of France in that situation: you have read how he was treated by the victor in the field, and in what manner he was afterwards received in England. Four hundred years have gone over us; but I believe we are not materially changed since that period. Thanks to our sullen resistance to innovation, thanks to the cold sluggishness of our national character, we still bear the stamp of our forefathers. We have not (as I conceive) lost the generosity and dignity of thinking of the fourteenth century; nor as yet have we subtilized ourselves into savages. We are not the converts of Rousseau; we are not the disciples of Voltaire; Helvetius has made no progress amongst us. Atheists are not our preachers; madmen are not our lawgivers. We know that we have made no discoveries, and we think that no discoveries are to be made, in morality,— nor many in the great principles of government, nor in the ideas of liberty, which were understood long before we were born altogether as well as they will be after the grave has heaped its mould upon our presumption, and the silent tomb shall have imposed its law on our pert loquacity. In England we have not yet been completely embowelled of our natural entrails: we still feel within us, and we cherish and cultivate, those inbred sentiments which are the faithful guardians, the active monitors of our duty, the true supporters of all liberal and manly morals. We have not been drawn and trussed, in order that we may be filled, like stuffed birds in a museum, with chaff and rags, and paltry, blurred shreds of paper about the rights of man. We preserve the whole of our feelings still native and entire, unsophisticated by pedantry and infidelity.