The Great Eastern — launched in 1858, scrapped in 1889 — was, speaking as strictly as can be, a wonder. Even by the standards of its own nineteenth century, the epoch of the most comprehensive material progress in history, it was superlative: by orders of magnitude the largest ship yet built, and laden to the bulwarks with engineering innovation. In advance of its first arrival in New York, the city’s people received their foretelling in nineteenth-century style as a list of its attributes. But once the vessel actually tied up at its pier, it was understood to be carrying one more attribute, this one ancient: a sobriquet, “the great iron ship.” This wasn’t an engineering feature; it was a feature of being. Its four words were the poem of this preview in prose.

Floating above the words of the legend, Great Eastern’s image is embellished ex voto with hand-painted watercolor, but time has reduced that and its significance to soiled tatters. Conceived and brought to realization half a century ahead of its time, the great iron ship never could fill enough of its passenger berths to make a profit. For a time between 1865 and 1873 its immense capacities found another purpose when they made possible the laying of undersea telegraph cables across thousands of miles, but once the cables could begin carrying code, the carrier that had carried them was beached in memory. Stripped there of the iron idea that had communicated its reason for being, Great Eastern was painted over with servile words and became a floating billboard.

Nevertheless, on the record of one sunny day in about 1864, there still exists this trace of what preceded the words. It is historically bound to an approximate time and a specific place: Manhattan, at the foot of Hammond Street. 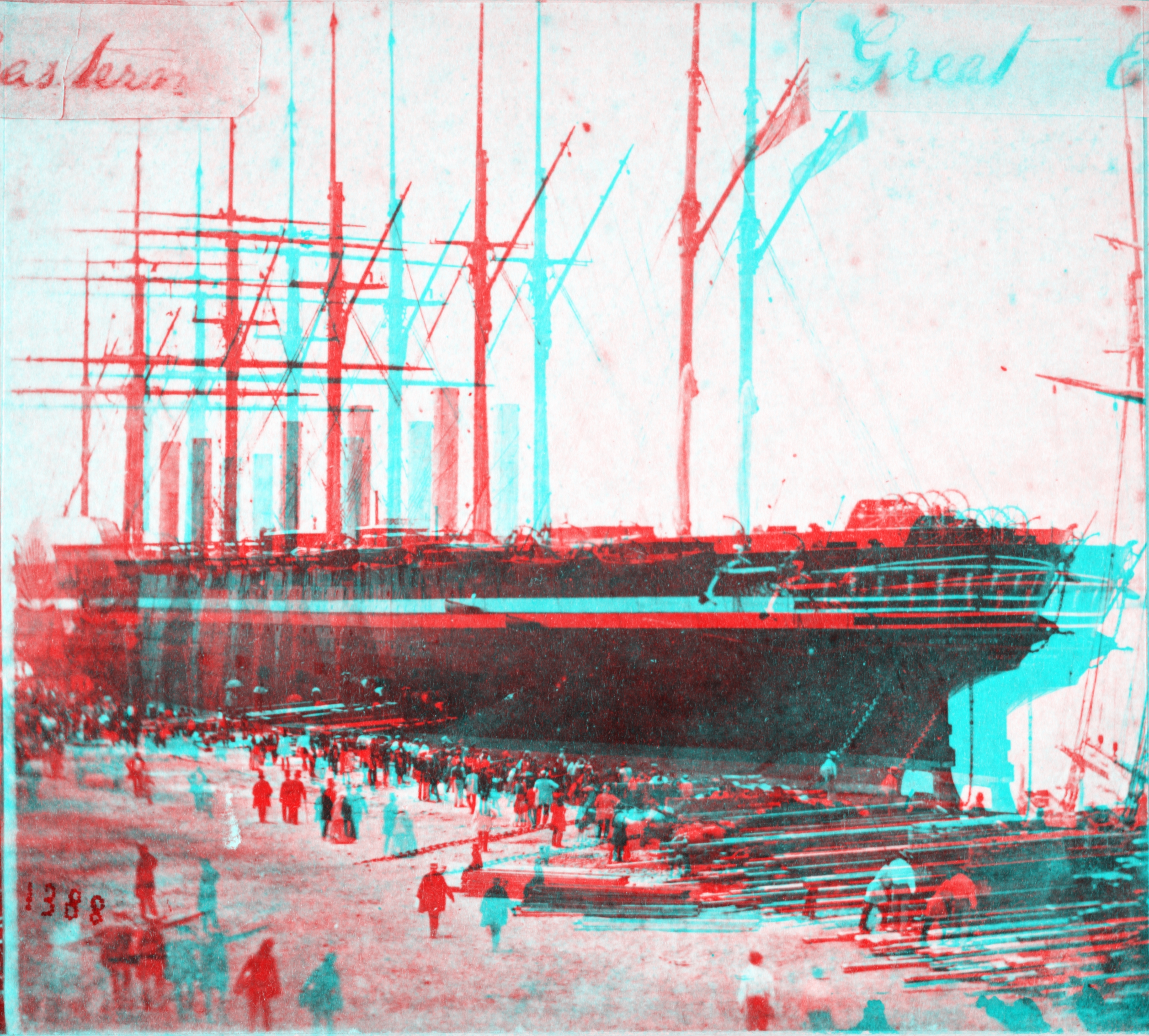 This reconstruction of that record is an anaglyph: a colorized composite image of a black-and-white stereo pair, viewable in three dimensions through a two-color viewer. What is seen there is, as those who viewed it in 1864 would have said, lifelike. But before the year 1864 shelved the lifelike for a future to see, it library-bound it with some words. Pasted across both halves of the stereo pair and therefore not readable in stereo, these are a tiny calligraphic text written in about 1864 by someone who must have intended it to inform future memory. Pleading for us to understand, it wrote itself onto a twinned photograph. But that yearning to be read there in the future had to take a form, and that form had to be an 1864 form, perhaps even a form penned with a feather plucked from a bird living then but dead now. As had long been understood by that time, the letter killed.

Unscathed by the words, however, some tiny 1864 people in pierside attendance on Great Eastern continue serving up  meanings of the word huge. But as of the twenty-first century, that’s all that’s left for them to do. Even the sounds they made about hugeness in 1864 are different now than they were when they could make contact midair with the sounds of steam engines and paddle wheels. A current glossary of the time dialect named Great Eastern will need to be cross-referred to the Lilliput idyll of Gulliver’s Travels, and Gulliver’s Travels itself has long since been downscaled to the dimensions of a children’s book. When our eyes stray from the 1858 image of Great Eastern to its captioning words “this immense vessel” followed by the Lilliputian “tonnage 22,500 tons,” we will realize that the time has come to relearn outgrow.

But children’s books are picture books, and the picture texts they teach are sometimes lifelike regardless. The time must have come by now for you to have solved, explained and outgrown the magic trick in words called Happily ever after, but somewhere on a page, perhaps still capable of being regarded with the help of the right toy, there may still be viewable a picture that looks like life. So long as you refrain from thinking into the future about that, it may be pragmatically useful to you at bedtime. Think of it as the story your mother never got around to finishing: the one with happily ever after consolingly still to come on the not yet seen last page.

Offered in sincere sympathy, this message of comfort from section 11 of Jonathan Swift’s A Tale of a Tub, as published in 1704. “He” is Jack, Swift’s name for cultural practitioners of the theology of John Calvin. 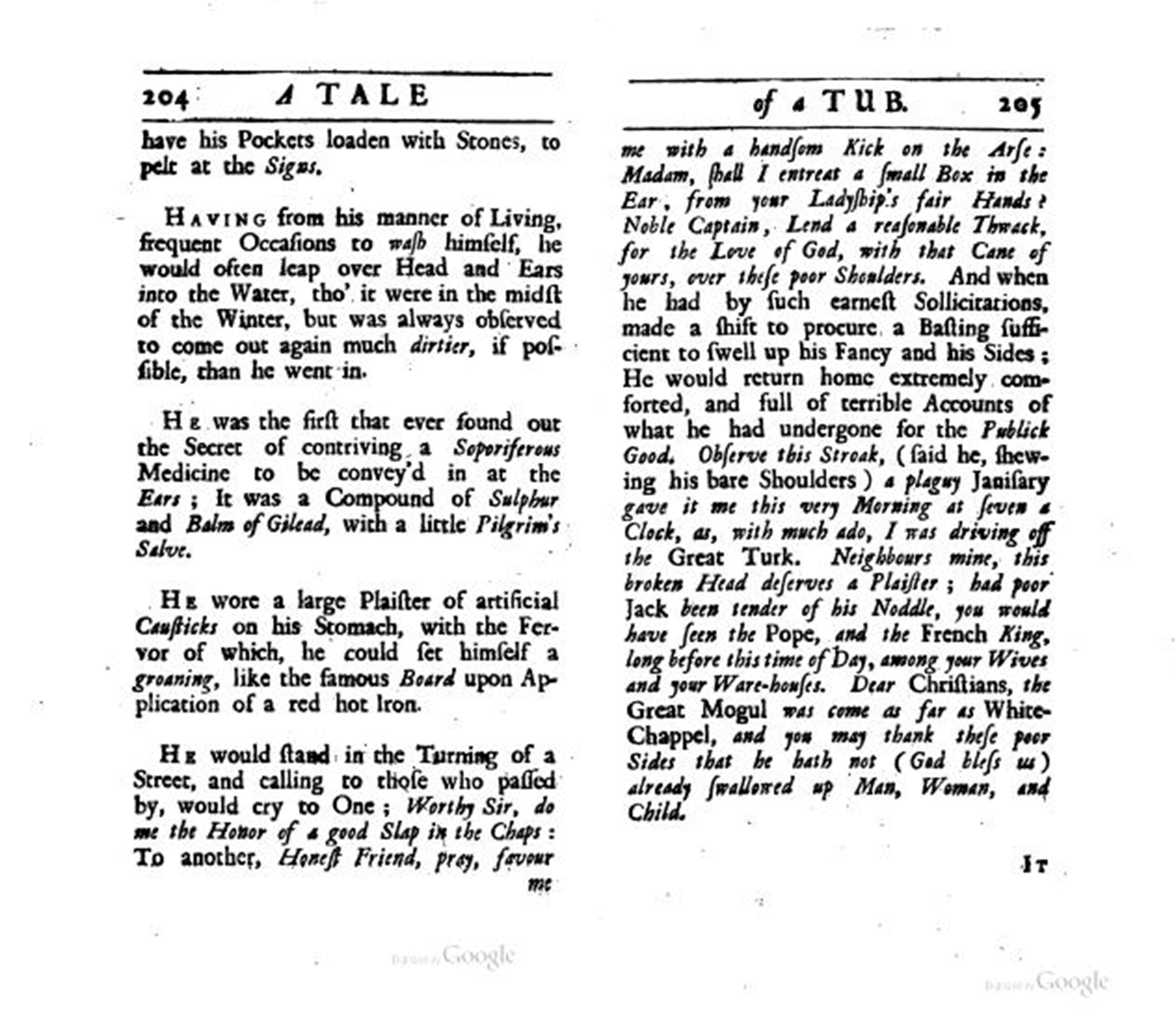 He would stand in the Turning of a Street, and calling to those who passed by, would cry to One; Worthy Sir, do me the Honour of a good Slap in the Chaps: To another, Honest Friend, pray, favour me with a handsom Kick on the Arse: Madam, shall I entreat a small Box on the Ear, from your Ladyship’s fair Hands? Noble Captain, Lend a reasonable Thwack, for the Love of God, with that Cane of yours, over these poor Shoulders. And when he had by such earnest Sollicitations, made a shift to procure a Basting sufficient to swell up his Fancy and his Sides, He would return home extremely comforted, and full of terrible Accounts of what he had undergone for the Publick Good. Observe this Stroak, (said he, shewing his bare Shoulders) a plaguy Janisary gave it me this very Morning at seven a Clock, as, with much ado, I was driving off the Great Turk. Neighbours mine, this broken Head deserves a Plaister; had poor Jack been tender of his Noddle, you would have seen the Pope, and the French King, long before this time of Day, among your Wives and your Warehouses. Dear Christians, the Great Mogul was come as far as White-Chappel, and you may thank these poor Sides that he hath not (God bless us) already swallowed up Man, Woman, and Child.