The bookstore’s display card calls attention to a novel of moral crisis published in 1901 and typical of its era: a serious-indeed romance about a young man having to decide between a bad girl and a good one. Imagine Henry Blake Fuller’s The Cliff-Dwellers without the cliff. It seems not to have made much impression. Online in 2017, I’ve found only two things that resemble reviews: in The Salt Lake Tribune for November 11, 1901, page 2, a single quotation (“Your face is not your fortune”) in a filler graf headed “Wit and Wisdom from New Books”; and in advance in The New York Times, this. 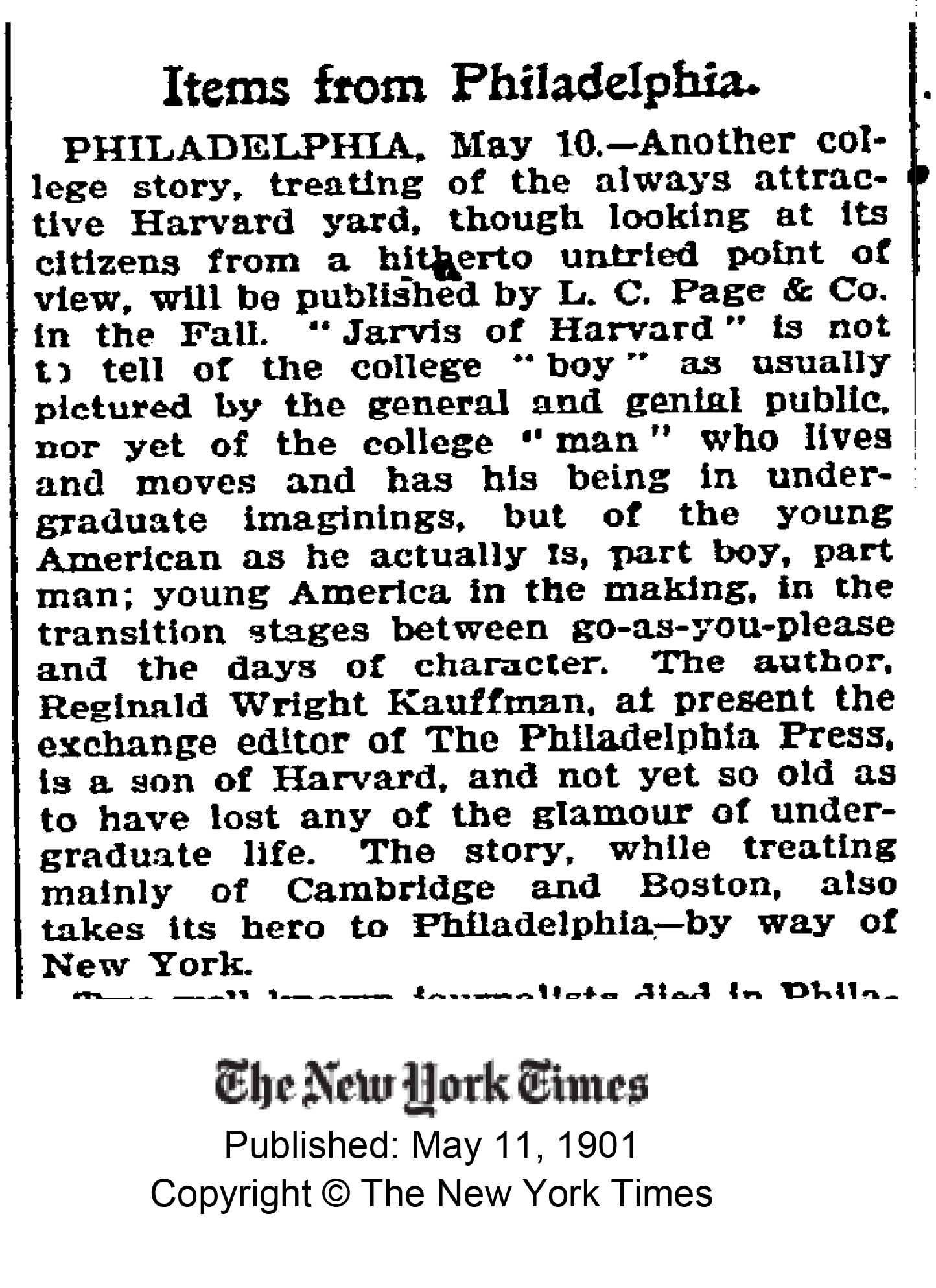 Tonally, that précis is accurate; in Reginald Wright Kauffman’s Harvard, dorm-room conversations are held about the mystical influence of Harvard. But in terms of page count, most of the Bildung in this Bildungsroman is football. Our hero’s moral crisis occurs after the game is lost to Yale, 28-0.

The genre formalism isn’t interesting either. At the end the bad girl plays Wagner on her piano in the background, good sport! for the kiss with the good girl.

But on the card there’s this. 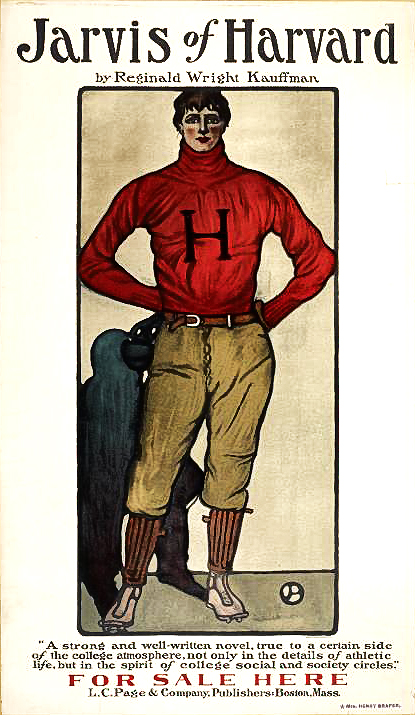 That H isn’t just a team identifier; it’s a Peircian symbol. A black rectilinear hardness swirled around by crimson brushstrokes, it imposes control on their flow and gives it a form. In form, forcibly concentrated to a meaning, the connotations of the initial H burst forth into a sentence-long idea: H (yes! at last I realize it, in the dazzling, newly discovered full sense of the word!) is for Harvard. Understood on the body, the sentence in crimson oil teaches its boy wearer to think of his body as a newly understood allegory of its institutional self. The boy has learned at last to think of his body as H.

The bodily letter takes dominion everywhere. In the portion of the image that hasn’t yet been changed, the boy’s epicene face has started going tiny as the body below swells to manly form and presses against the yielding boundaries of what it is about to cease being. 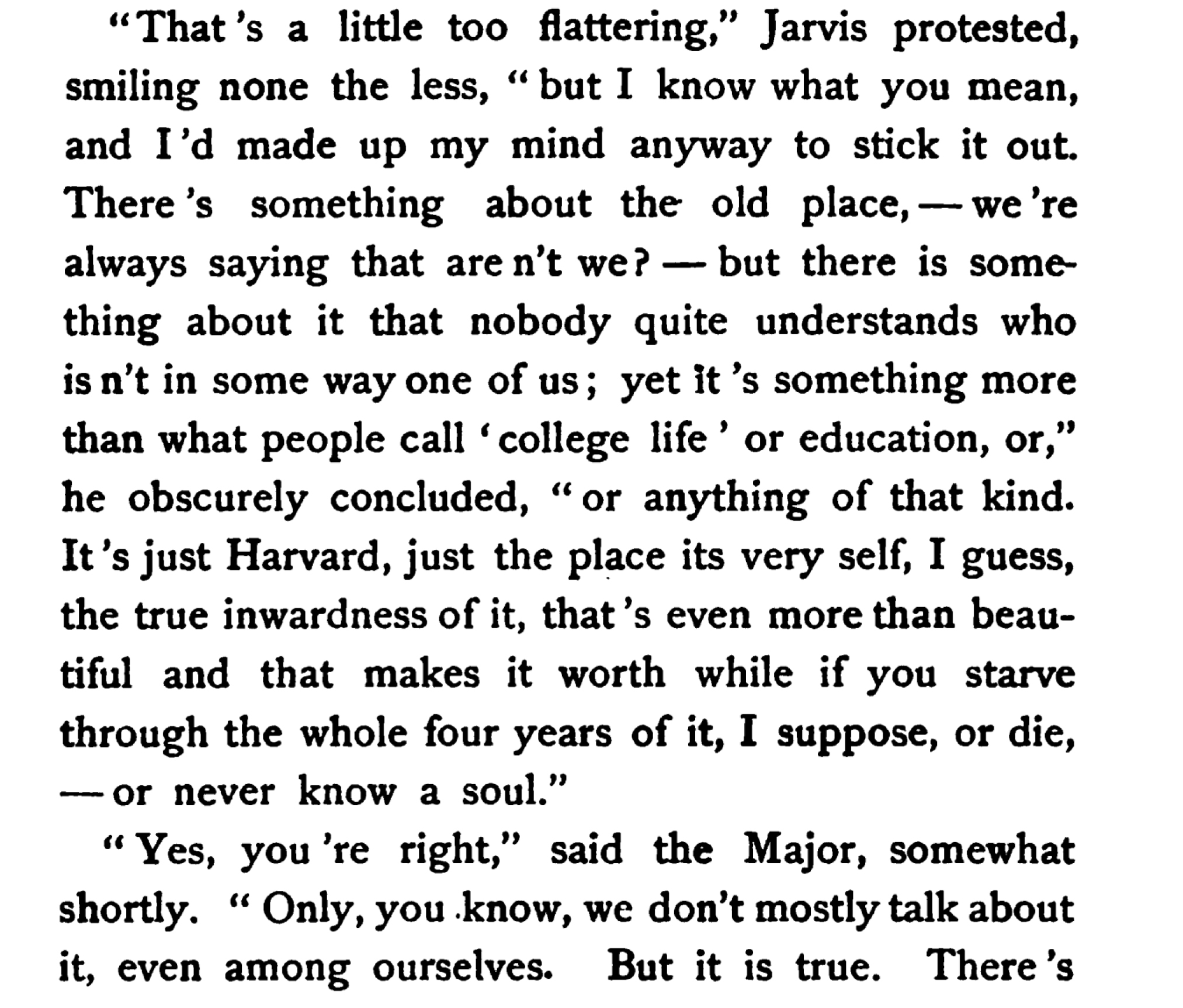 “It is true,” says the boy’s friend. Burgeoning and then contracting, truth concentrates itself down to a single word. Then, in red and black oils, it leaves behind the word’s last vestige of mere referential meaning and dwindles to an abstract shape which has shed all reference to anything beyond itself. It has now fully become an idol, and its name forever after will be H. From every mouth in the stands, forever after, it will sigh the breathy hymn of itself.

Jarvis of Harvard is online at Archive.org. The quotation above comes from page 353.