As early as the 1940s, when the New Criticism was beginning to take hold, the caption under Berenice Abbott’s photograph of a bakery window must have begun to seem ludicrous. In 1939 it had been published in Abbott’s book Changing New York with a caption that noncommittally began, “BREAD STORE, 259 Bleecker Street, Manhattan; February 3, 1937.” Those modest factual words were in the same register as the simple rectilinear form in glazed brick with wicker embellishments that filled the image’s lower third: the bakery’s foundation, with a coal chute and some breadbaskets. None of those were anything but utilitarian. But then above the practical forms there abruptly appeared a vitrine window-dressed in the style of Abbott’s mentor Man Ray: a simultaneous reflection and refraction, displaying both a delivery truck’s curved roof and, through steamy glass, loafy shape, loafy shape, loafy shape, loafy shape, soft loafy hard-crusted shape, woman’s loafy face. 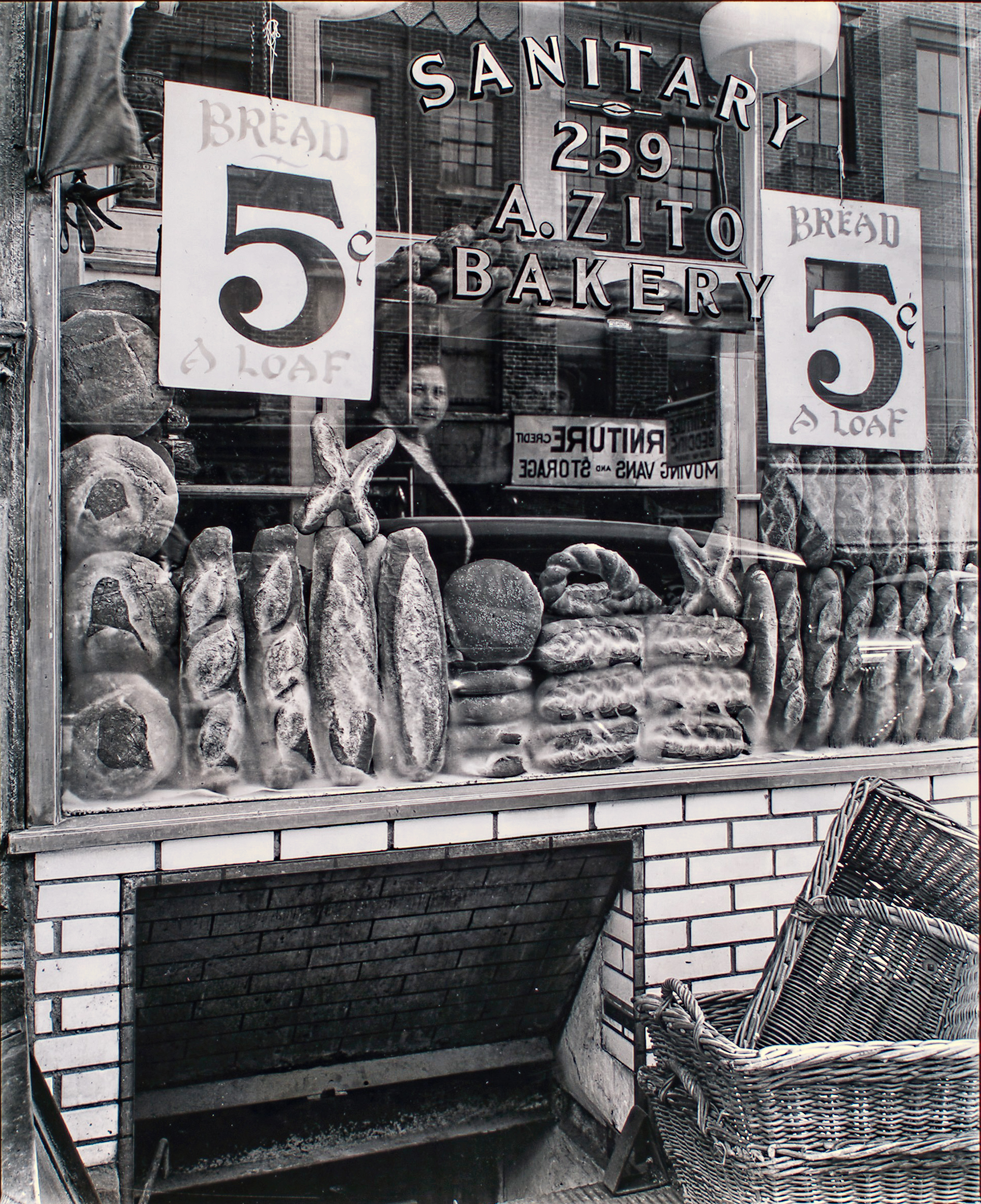 In the presence of that onslaught by the syntax of the surreal, the caption’s prose reacted with a spasm and went dark. Squeezing its eyes shut, it sat down on its bottom, swelled itself from a title to a treatise, and gabbled:

Although food chemists believe that bread baked on its own bottom instead of in tins is the healthier food, one now finds only a few bakeshops such as A. Zito’s, where the old-fashioned methods are still in use.

In the dark of the not seen, a simulacrum of something not there had been talked into something that would have looked (if it could have been seen) like being. It wasn’t actually present in the image, but in well-meaning intention it was meant to be. Trying to intend, it made its speaker sick with desire. Laugh at that feebleness of imagination, instruct the New Critics Wimsatt and Beardsley. They would have diagnosed the failed desperate maternal effort to create a nutrient force as a case of the intentional fallacy. As of 2017, we might call it fake news.

But the unfake history of the diagnosis makes the laugh unfunny. From Bonnie Yochelson’s 1997 study, for instance, we’ll learn that to read Changing New York in accordance with the artist’s explicitly voiced intentions is actually to read it dimly, as a subfusc artifact of New Deal social engineering. With the smile withering on our lips, we’ll learn then that what Yochelson calls “the caption catastrophe” (n.p.; page containing figure 14) refers not to the captions’ grim didacticism but to something grimly didactic about Abbott herself. In this collection, Abbott — Abbott, the woman who singlehanded saved from oblivion Eugène Atget’s diffident archive of not quite readable fragments! — seemed to have considered herself first a social educator trying to convince people of what was good for them and only thereafter a formalist artist with a formalist’s concern for making sure not to see what isn’t there.

And so her words failed her when the time came to use her mouth for something in addition to eating.

Two days before Abbott set up her sixty pounds of photographic apparatus on Bleecker Street, she had gone through the same ritual on Hester Street. There was a shop there, too, with, likewise, a person behind the window. But on the window the language shapes were different. “Yiddish,” says the caption about that difference, and then it begins executing the task of explaining, at a final length of six lines: “A complex dietary logic underlies the Jewish insistence that chickens must be newly killed before they are eaten. . . .” 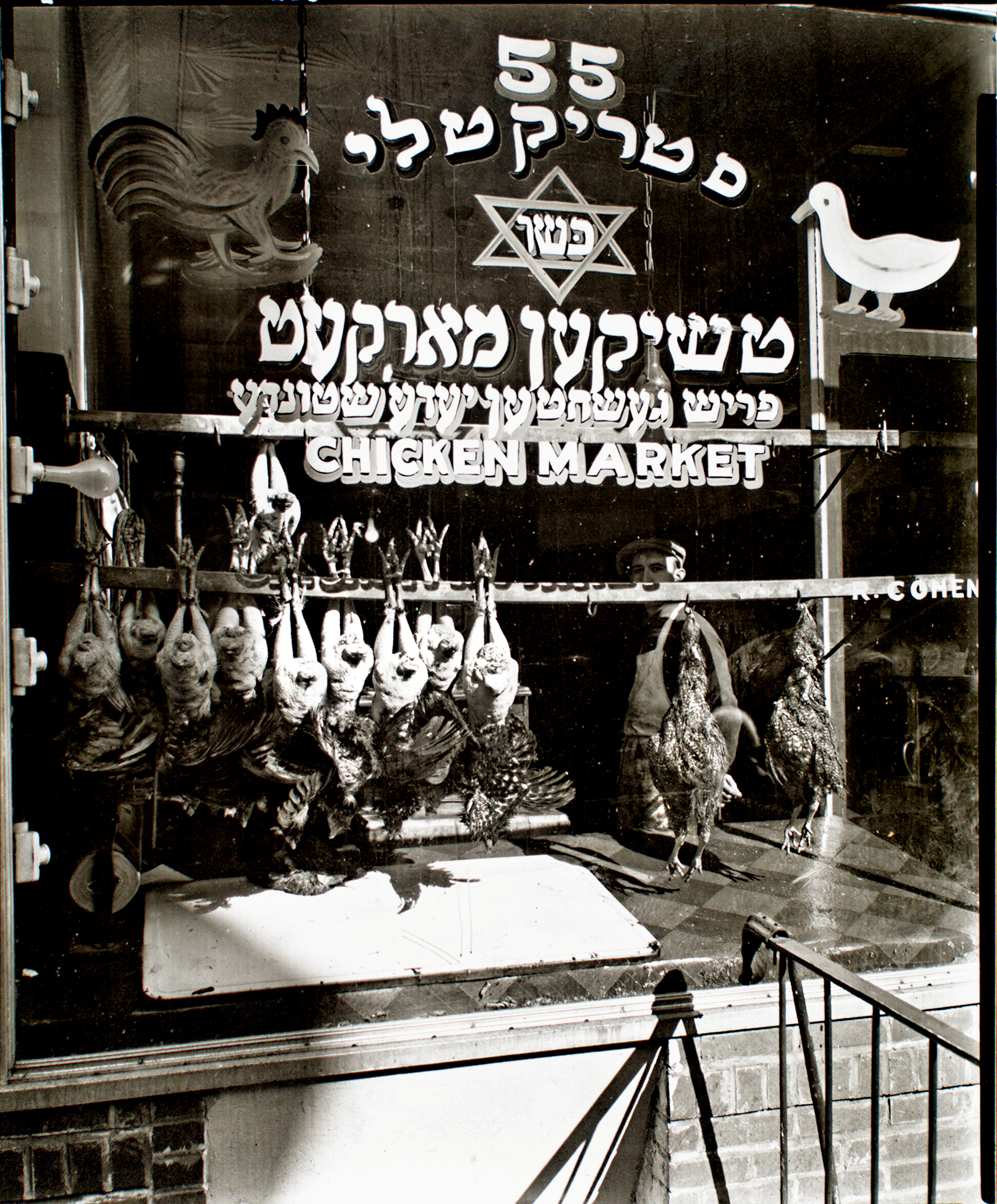 But that opening word “Yiddish” isn’t capacious enough to hold the thought. On its own in Berenice Abbott’s edition, separated from Hester Street, it lacks etymology, which means that it lacks history. Etymologically, for instance, the three lines in the Hebrew alphabet under the number 55 are neither Hebrew nor Yiddish but transliterated English. Letter for letter, in English, those three lines read “Strictly kosher chicken market,” with the Hebrew loan-word “kosher” isolated from the rest of the phrase within a Jewish star. “Chicken market,” repeats the English once more at the bottom of the sign, this time undisguised. As of February 1, 1937, R. Cohen and his Hester Street culture seemed well on their way to American assimilation. On Cohen’s window, the one remnant line of his or his parents’ primal Yiddish is buried in the middle, in fine print. It also happens to map exactly, phoneme for phoneme and trochee for trochee, onto another language of the majority culture, German. Frisch geschlachten jede Stunde, reads this transliteration: “Freshly slaughtered every hour.”

No irony attached to that line in that language in 1937, and it would be an anachronism to read irony in now. Still, if you try to think of this image in 2017 without irony — formally, undidactically, as if these words painted on a window were just, well, words, painted — the image will lose an unseen but not unsensed remnant of prior meaning. It will be like a Jacob Riis photograph no longer able to access Riis’s photographically mediated understanding of the word “tenement,” or a Lewis Hine photograph no longer able to access Hine’s photographically mediated understanding of the phrase “child labor.” Go ahead and delete the caption printed alongside the image; Bonnie Yochelson does, even though her edition of Changing New York is much longer than the original. But the words that remain despite that, the ones painted on glass in three languages, probably aren’t erasable. It may be that that window never will be transparent again.

The two Abbott images have been photoshopped for contrast from prints in the Miriam and Ira D. Wallach Division of Art, Prints and Photographs: Photography Collection, The New York Public Library, http://digitalcollections.nypl.org/items/510d47d9-4e64-a3d9-e040-e00a18064a99 and http://digitalcollections.nypl.org/items/510d47d9-4fb7-a3d9-e040-e00a18064a99.