By the summer of 1922, ten years after the event, Meyer Wolfsheim had shaped its memory into a well formed, well rehearsed narrative, organized classically into beginning, middle, and end. “The old Metropole,” ran Mr. Wolfsheim’s beginning. “Filled with faces dead and gone. Filled with friends gone now forever. I can’t forget so long as I live the night they shot Rosy Rosenthal there.”

During the event’s immediate aftermath, of course, the classical hadn’t yet gone into effect. The very long article that the New York Times published on July 26, 1912, for instance, couldn’t settle down to its storytelling until it had jittered and rasped its way through a pre-classical lead-in groove communicating little more than surface noise. That was the pre-narrative sound-effect analogue of a stage direction reading, “Time: the present.”

Likewise, the contemporaneous photograph that accompanied the article was little more than beginner’s literature, with content predetermined by a didactic caption right up top and a moral communicated by a pair of overly obvious symbols: on one side of the image’s woman protagonist a dark portal, on the other a sign proclaiming, with sweatily indignant irony, “Tables for ladies.” The picture story’s supporting roles, too, betray negligence in the casting department. Pigeontoed gumshoe in ill-fitting suit, bald and distressed proprietor wanting to get back inside: the hiring decision that brought these types onto the scene was 9-to-5 hackwork. This photographed setting is just a trailer for a story that (the picture promises us) is fully communicated somewhere else. It satisfies nothing but whatever demand there may be for an illustration of the words “Dodging camera.” In a composition that amateurishly cancels out the overdetermined with the unseen, can Rose be more interesting than the dark behind the door to her right? 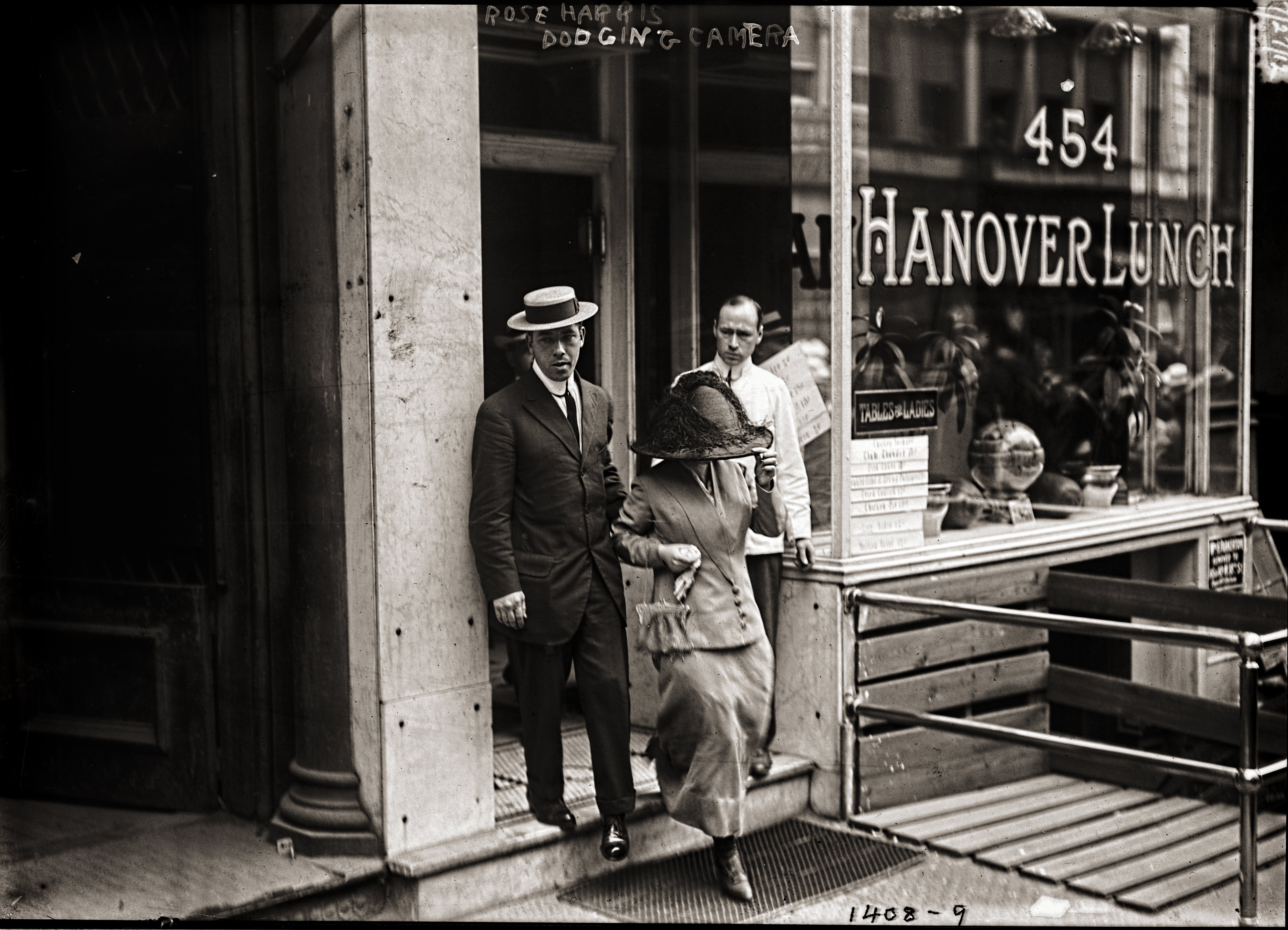 But now submit the image to the discipline of the classical. Delete the dark, for instance, and make Rose symmetrical by arranging for her to become a center. Then see: 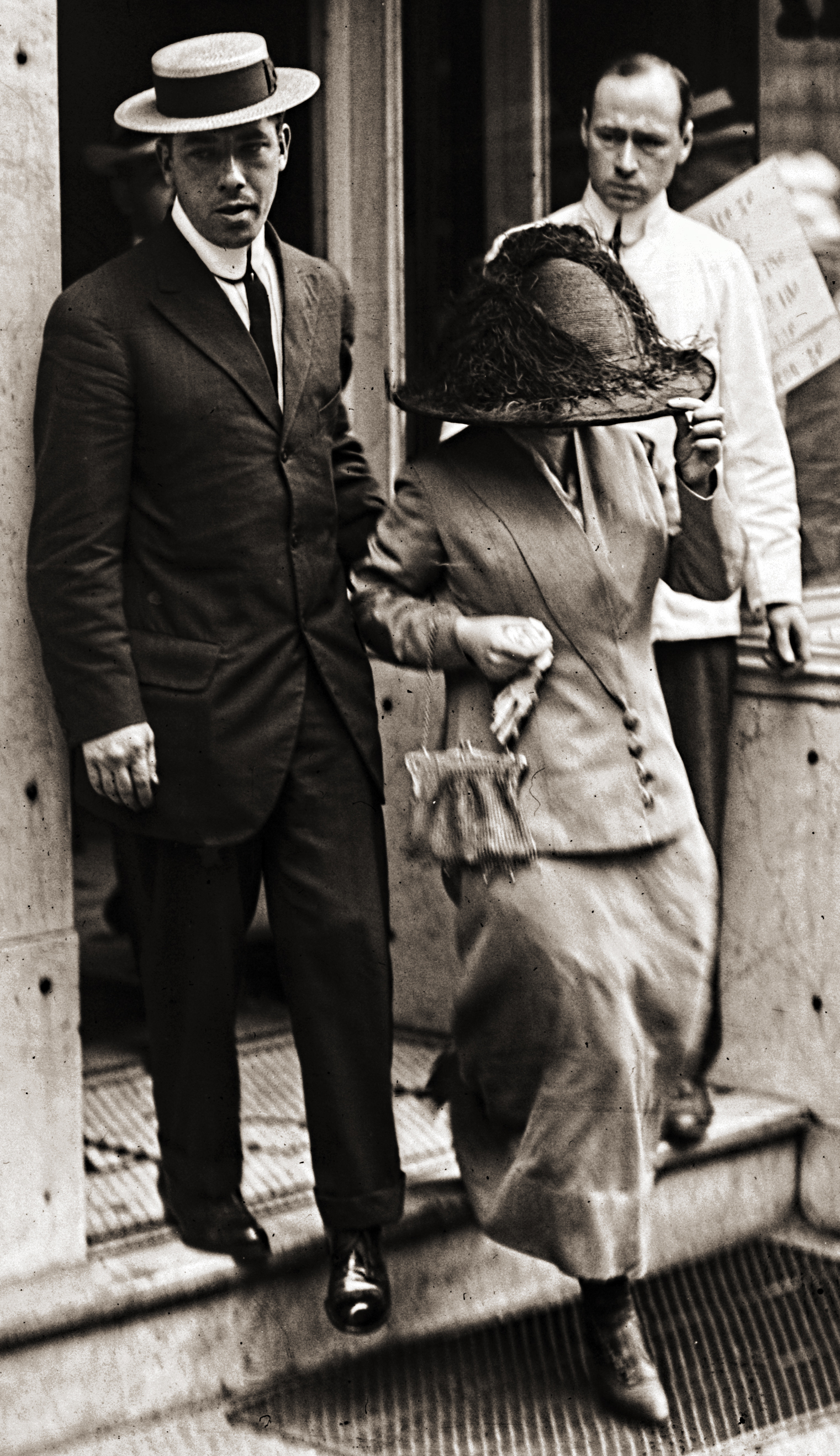 The delicate mesh purse, the clutched glove, the ungloved fingers daintily curled beside the daintily tenacious thumb and index, the drooping plumes atop what was called, at the time, a picture hat . . .

Seen now merely as she is, freed from the interpretive shackles of her caption, Rose has become fully visible. Now the details of her image have acquired significance and become character attributes. They are honest agents of their protagonist now, working hard to conform themselves to the Aristotelian unities. A photographer has caught them in the act of policing themselves into subordination to the art of the photograph, which is the art of being caught in the act.

On a stage somewhere else, perhaps in the same moment, an artist in a different medium is making cognate gestures in obedience to the discipline of his own art. This artist is a worker in sound, but at the moment he has become quiet —

(He carefully unfastens the helmet and lifts it from the sleeper’s head. Long, curling hair pours out. Siegfried is startled.)

— and as we watch, his silence pours from the stage, fills the theater, and becomes another episode, this one silent, of the story noisily illustrated elsewhere by a photograph and a set of stacked headlines. There on the sidewalk in front of Hanover Lunch, the corresponding part of the story turns out to be an American translation of the moment when the warrior woman Brünnhilde was put to sleep somewhere in Germany, there to await the future.

Looking at the photograph, we may still think it differs from the opera. But the classical organization of detail is the same in both works of art, and perhaps the only significant reason for difference is that the art of helmet-making underwent changes between Wagner’s time and, say, Otto Dix’s. In the days of the helmet-shaped picture hat, a single image of the deathly still could be beautiful enough to startle a heroic tenor into silence. Ten years later, it was only the subject of a picturesque anecdote told by Mr. Wolfsheim to his indulgent young friend Major Gatsby, who had already seen the sights from under a helmet of his own.