Rising through the black verticals of men’s upright bodies and the sheer of the William G. Mather’s side, your eye soars upward. At the top, a climax to the shape begun by the ship’s rudder, the ship’s stern executes a curve. The curve is a parabola, the arc traced by a body rising and then falling back on itself, but this rise reaches its limit only when it has passed out of the ship’s body and reached the sky.

On that day it was a lightly clouded, all but touchable sky. Far beneath it, legs spread wide and steady, a tripod held up a camera in which waited an 8-by-10-inch glass negative. Then the lens opened wide the camera’s rosewood box, and it poured in cloud and steel and flesh and light. It molded them there into the round of the image’s great dome. Ever since, it has been launching the dome back upward. 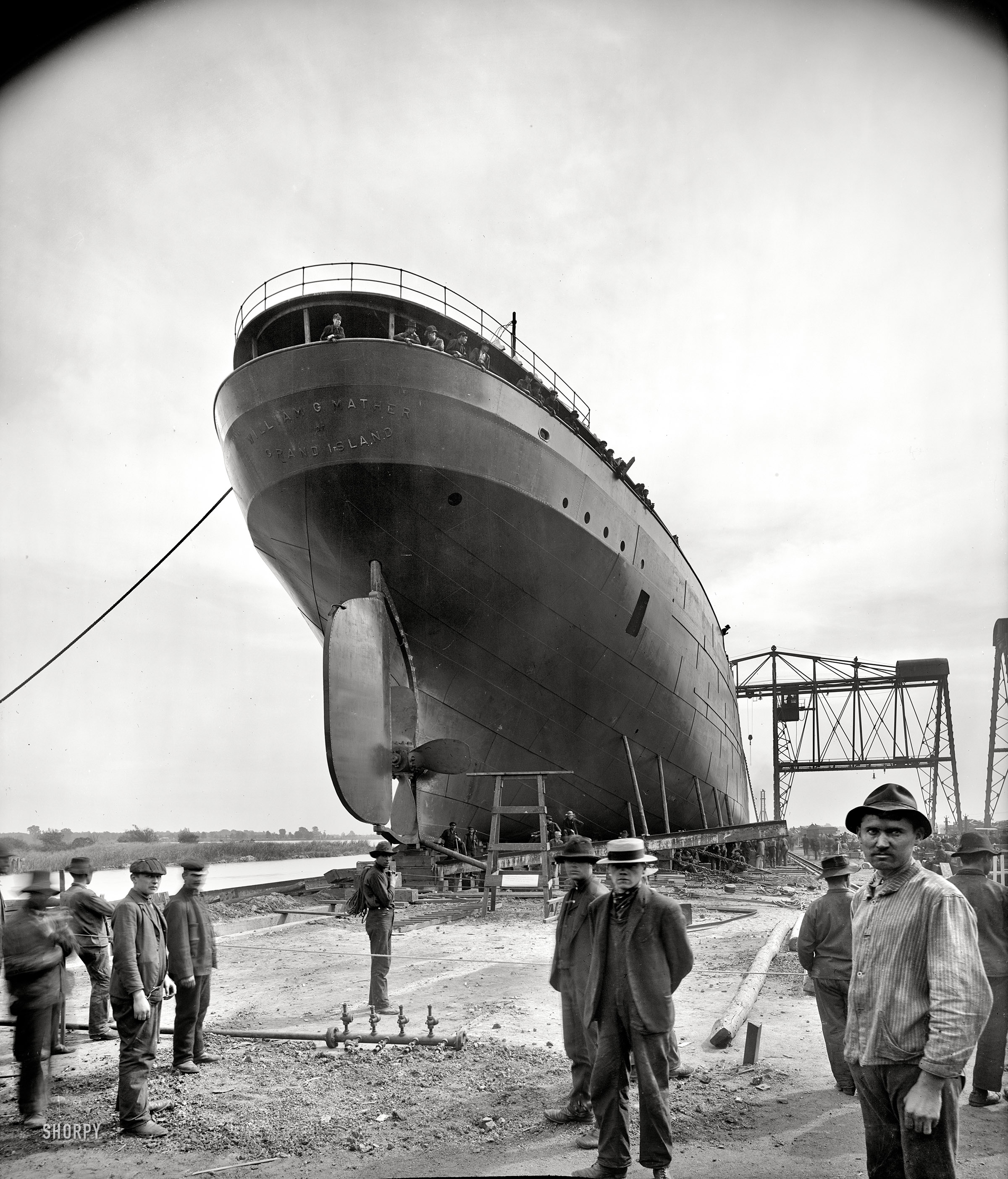 As of 1905, that gesture in the light might have taught Ecorse to see itself as a universe made of tangible things — the camera’s glass and wood, the ship’s bronze and steel, the men’s bodies. In an embodied universe like that, in an Ecorse under its dome of light, you don’t look at the dome, passively. Instead, you watch it be. Changing through time as it lights the ship which is about to descend the ways and begin moving outward from Ecorse, the dome has a beginning and will have an end. In the old sense of the word, meaning “complete,” it is perfect.

Thy firmness makes my circle just,
And makes me end where I begun.

But to look at Ecorse today is to look not outward but downward. 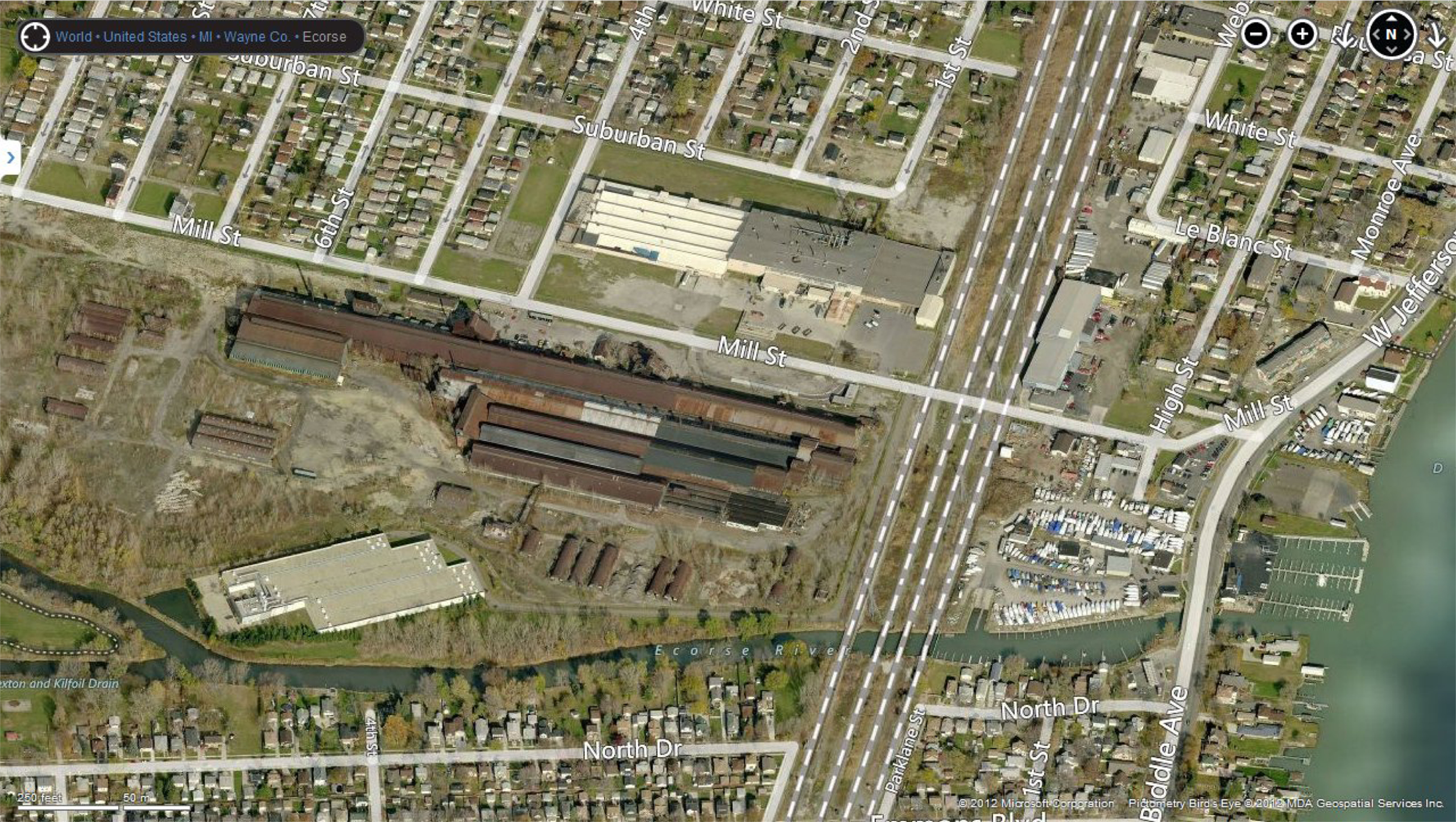 The Great Lakes Engineering Works went out of business in 1960, and if any trace of it remains, it isn’t visible from orbit. To Bing Maps (early in the disapearance) and Google Maps (later), the most prominent feature of Ecorse in 2012 is the bulldozed ruin of what was once a steel mill. 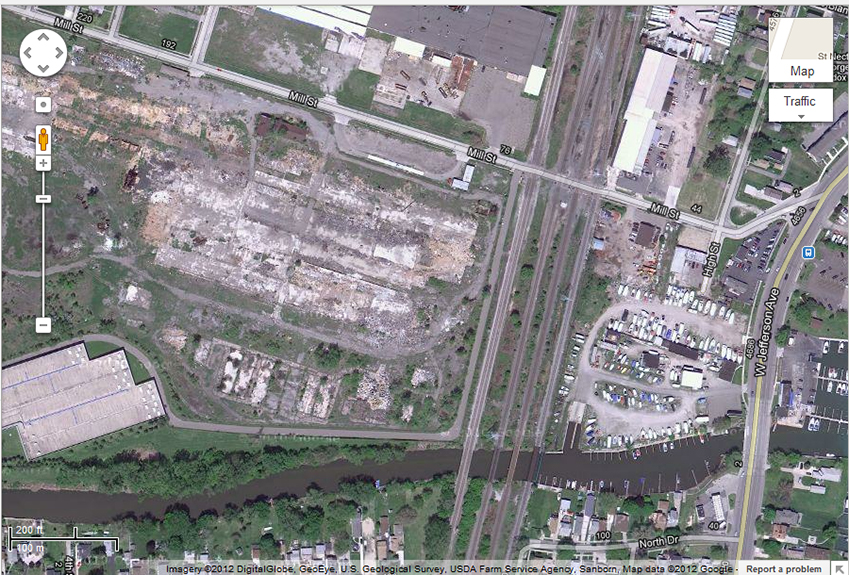 This full-color image, captured from space by a process unrealizable in 1905, depicts an economy which itself has been derealized. If any people were visible in this 21st-century Ecorse, they would be seen differently by the lens because their bodies would have a different relationship to the eye. They would have to be conceptualized eyelessly, with the mind alone, because they are now subjects of a bodiless economy. In an Ecorse without a Works, their exchanges with one another are governed not by anything with a heartbeat but by capital’s Platonic idea of buying and selling per se. Ecorse in 1905 became perfect for a single instant: the fraction of a second it took a shutter to open and fill a rosewood box with light. But Ecorse in 2012 is imperfect everywhere. Its economy is now only an exemplum of the idea of money operating at a distance, far from the light that once could complete a picture by localized duplication as it reflected itself upward from flowing water to completing dome.

Have the laws of perspective in this new economy been established yet?

Perhaps they will be. If and when they are, let’s spare a moment to remember Ecorse. By then, perhaps, we’ll be seeing upward toward the domed sky of a new Ecorse. That may help light our way out of the art of the long twentieth century.