For now, the image is still there, floating in hazy light.

Big, luxurious, and the fastest ship in the world when it entered Atlantic service in 1900, the German liner Deutschland proved unpopular with passengers because its high-speed propellers made its decks shake. After ten years it was rebuilt as a slower, more comfortable cruise ship, rechristened with a less ambitious name, and sent on to oblivion. But here and for now, with its course away from memory not yet plotted, it lies in the river flowing past Hoboken, only momentarily still beneath moving clouds.

At the time, photographs like this one were called snapshots, and before then they were called instantaneouses. This instantaneous is breaking down now in craquelure, but it hasn’t yet ceased to put on display a large floating jewel, glittering with instant icons. This icon, see! represents the doctrine of three men painting a mainmast. This one represents the ship’s name in the squared-off, fraktur-inflected Bodoni of a German font. The iconic Deutschland is a free-standing word, generating connotation after connotation in a historical dialect that (its quiet blaze in the shade still signals) will never go extinct. And yes: by way of confirmation, aft of the word a little scow tidies up for a visit from history itself, preparing the palimpsest for a manual of what you will soon be required to see.

See, therefore. The icons (click to enlarge) will now perform their miracle. Someone inside Deutschland is at work with a shovel in a room full of ashes. 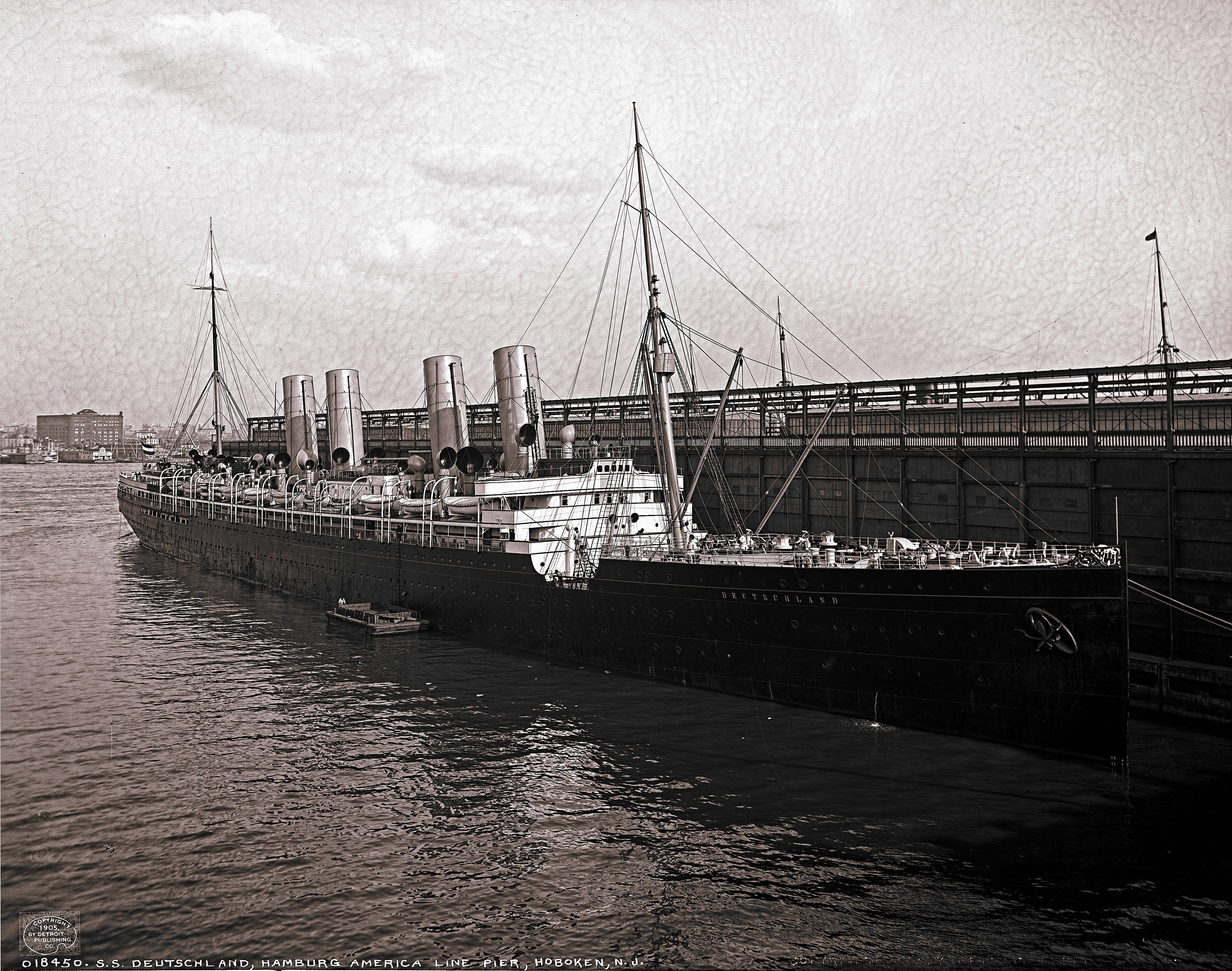 Elsewhere in Hoboken, light has different properties. The evidence at the river’s edge showed a clarity diffused outward under full control, originating in the dark within a hull and then moving outward to take dominion over all the light in the air. But along this sidewalk, seeing has been swaddled in blur from the beginning. For the moment, a little library is moored like a ship on the concrete, but its language can’t be read the way the word Deutschland is read because it doesn’t seem to belong in its composition. Deutschland is its ship. The sleek dark hull and its elegantly complementary wordform are equally at home in their sustaining water. But the sidewalk of Hoboken supports only a piece of indoor furniture and a jacket missing a button, and those are icons of a religion that isn’t alluded to in words like “Big Christmas number.” The jacket with its missing button is doctrine from the spoken language of the human and the social, as opposed to the written subdialect of words as such. And the words “Big Christmas number” tacked to a desk outside in the cold can’t be spoken in the same social accent as the name of a ship harmonized in gold on steel. 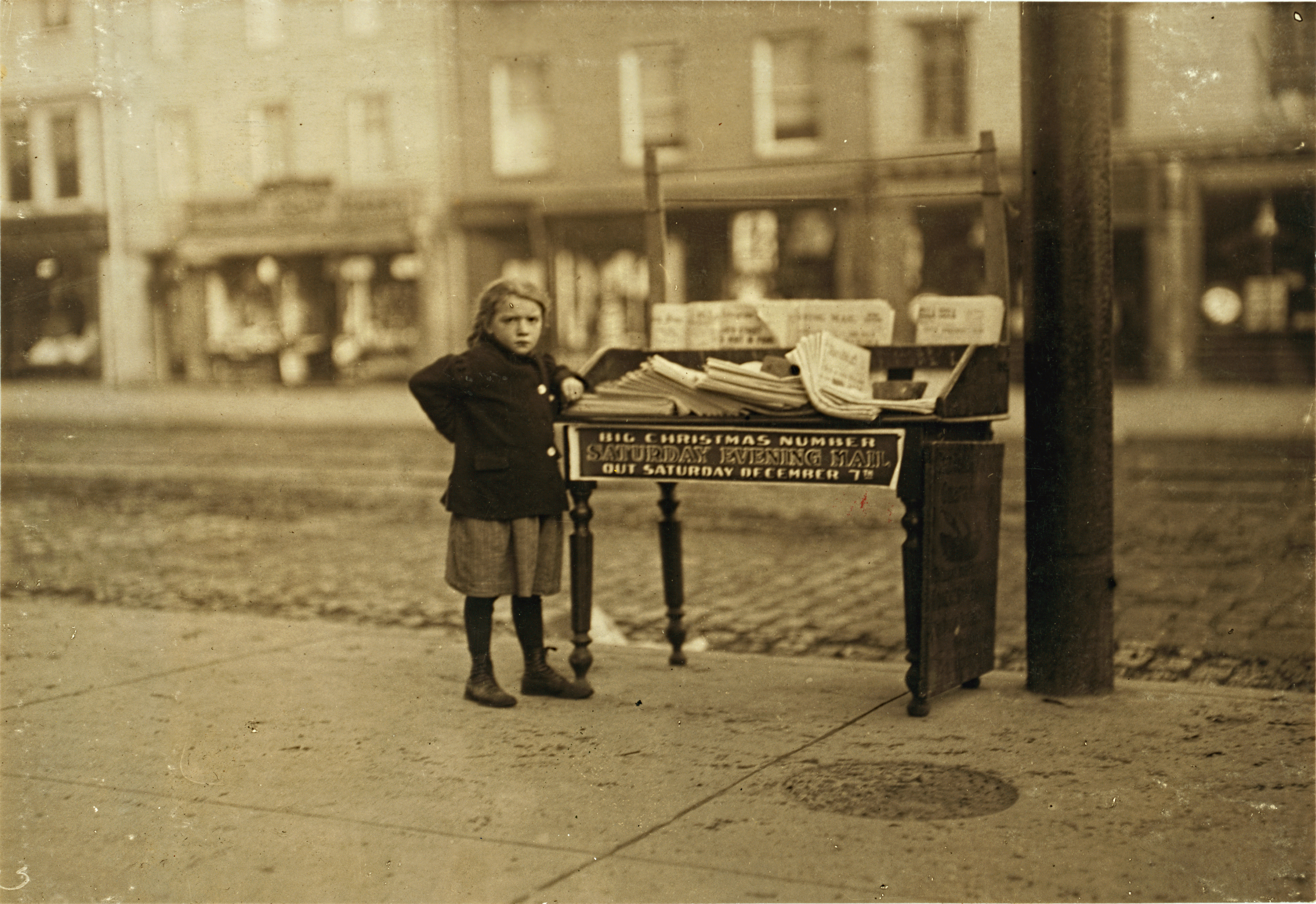 This instantaneous happens to be mounted on a card bearing more words, and that addition does spell out the instantaneous’s prehistory. But it isn’t continuous with the history in the photograph because its language isn’t photographic. It hasn’t originated in the image; it is only an afterword composed in the language of the photographer. Outside the image frame, separated from it by the confines that define and circumscribe the language of caption, the words of this third language try to mimic a voice — the voice of the photographer, Lewis Wickes Hine — in the act of saying:

But in this translation the words telling of a saloon can only be heard and read, not seen in the way a river is seen. Because the saloon lies outside the image, it and the truths of its connotations can only be spoken of through the mediation of language, not known immediately as an icon’s truth is known. Outside the image frame, the words of the translation can only tell us a story of a Christmas when nothing descended from heaven to take form as a name.

And within the frame are no words to flood the image’s mouth and say, “This is my name. After six years I will be able to remember it.” Without the possibility of words, the image is not an icon; it is an instantaneous. The instantaneous is an image that has assumed its form without development through time. It had no mother tongue.