The blogpost linked here is six years old, but last night I rephotoshopped the image and did some rewriting while I was at it. And see: thanks to last night’s powerful combination of Nik Dark Contrast with Nik Pro Contrast, the Singer Building is once more visible to history. Wikipedia says that until September 11, 2001, it was the tallest building ever demolished.

Framed by his open rear window, the conductor of the Putnam Avenue trolleycar has his eye on the curved track rising behind him. The car is moving on schedule through space and time. It and its track, all the other cars and all their tracks, have become the seen parts of a steel and stone structure rising buttress by buttress toward two piers in the hazy sky, and a wall of towers rising still higher beyond them. This construction in space and time dates from the summer of 1908. Click to enlarge. 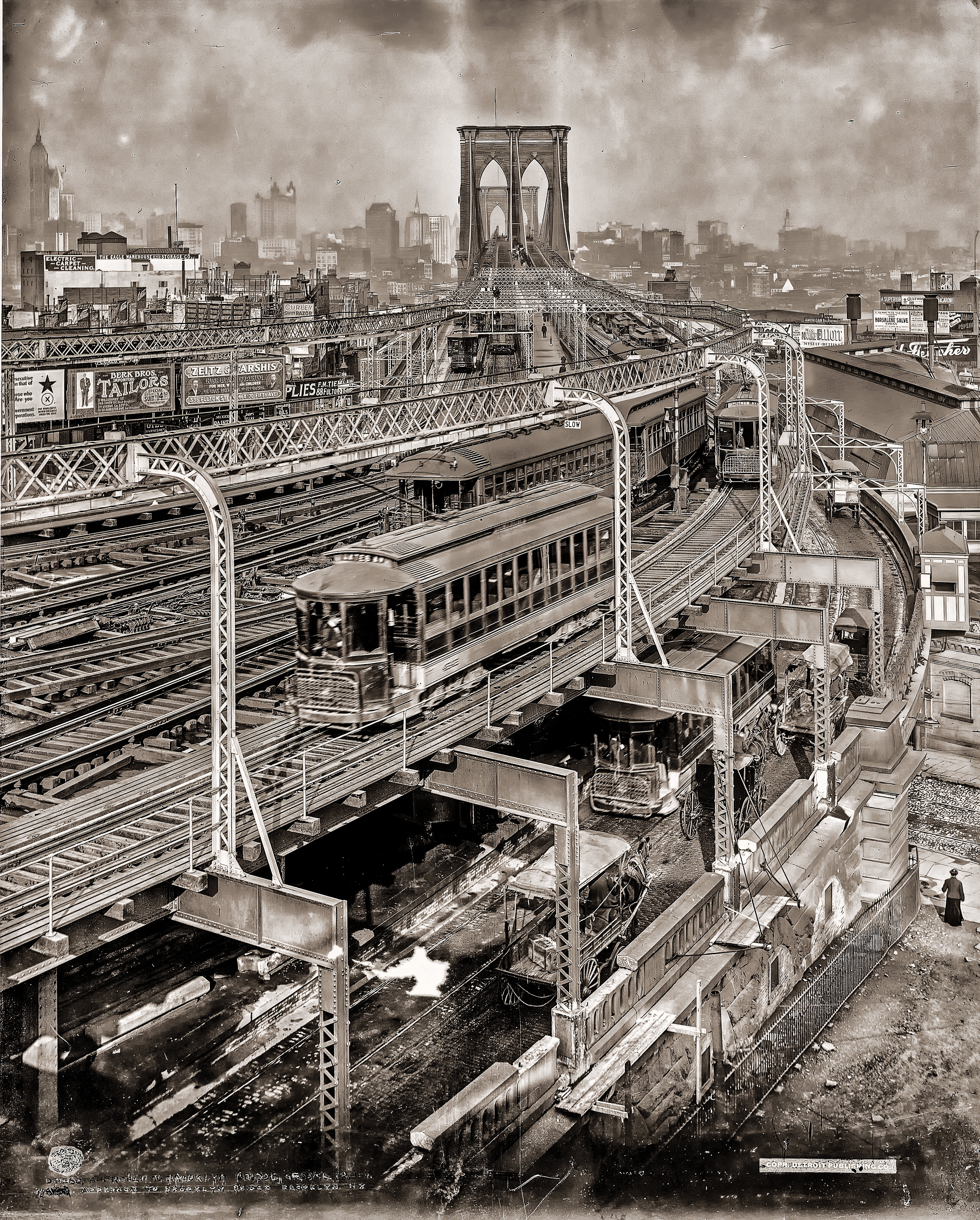 Toward the image’s right edge some words offer us a way of reading New York 1908. Our own New York, it turns out, is different. “Try Horsalene Salve today,” counsels a billboard advertising a skin-care product — but then the words spoken in 1908 canter away from us, laughing as they whinny, “if you want to use your horse.” Oh yes: Horsalene as in ha ha Horse! And to the left of the horsewords another billboard informs us that one of Broadway’s biggest stars, Maxine Elliott, will soon — that is, far in the past — be at the Grand in a new play, Myself — Bettina. Read into the past, the billboard’s nouns and pronouns (“Maxine,” “Myself”) become imperatives. They require us to transfer our desired object of vision from a single image we will not be able to see to an archive of images once actually seen by others.

In the archive, closed off from such distractions as the woman actually seeable on the sidewalk far below the Putnam Avenue car, we’ll find that Myself — Bettina happened to arrive on a different schedule from the one published on the billboard. It didn’t open at the Grand in November; it opened at Daly’s in October. In fact, it barely even made it into November. According to the Internet Broadway Database, it ran only 32 performances, from October 5 to November 1. All four of the reviews I’ve read online (in The Forum, The Smart Set, and the New York Times and Tribune) are negative. Twelve years after Harold Frederic’s novel The Damnation of Theron Ware offered reviewers an opportunity to visualize a small American town populated in its religious district by a sophisticated Catholic priest, his atheist friend, a cigarette-smoking aesthetic girl, and a bumbling Methodist minister, the reviewers lined up along Broadway to complain that the small-town religious architecture of Myself — Bettina was visually obsolete. 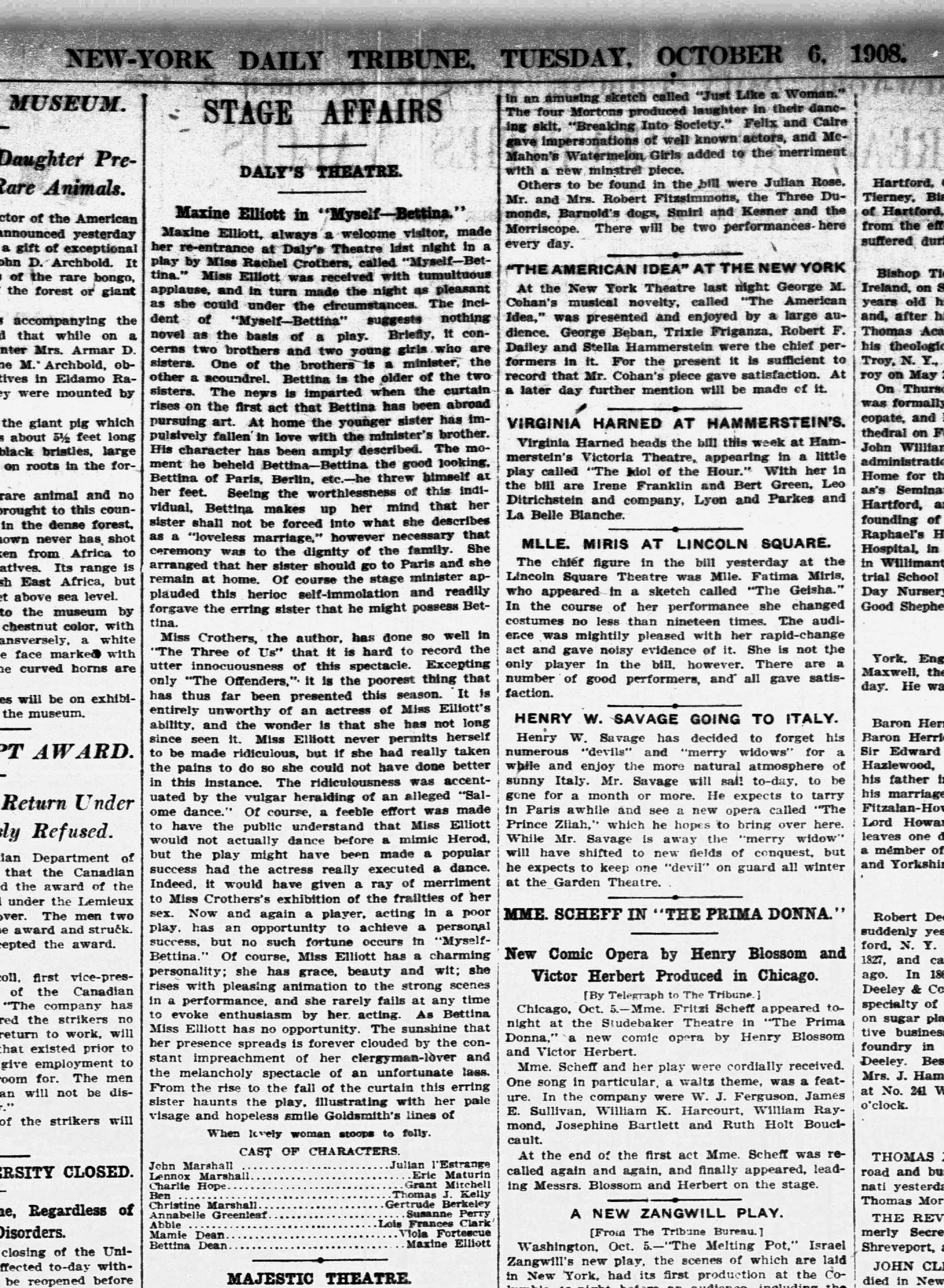 Imagine reading this review as you rode the Putnam Avenue car onto the bridge. Imagine, then, deciding not to proceed uptown to Daly’s Theatre and see the show. But just below and to the right of the Tribune’s view of Myself — Bettina, another headline announces the scheduled arrival of a play which in the event will stay and stay and stay onstage, and then transit into literary history. It’s a melodrama just as silly as Myself — Bettina, but unlike Myself — Bettina it came to Broadway from London equipped with a title that was useful on the approaches to the Brooklyn Bridge. Under New York’s smoky skies, it suggested: “With Ellis Island busying itself in the harbor, your world is changing. So stop thinking of yourself with that antique conception, ‘Myself.’ Instead, think of yourself as a thing: a thing continually changing into a newer thing — a thing as wonderful as, say, a bridge capable of spanning the world. You can do it! After all, you are in [pause; then, with emphasis] The Melting Pot.”

But here on the buttresses of the approach, melting has not yet occurred. The innocent words of the billboards facing into traffic still speak to us only of using our horses and eating our superior macaroni. Hart Crane has not yet imagined the Brooklyn Bridge as “harp and altar, of the fury fused.” But see the buttresses and read the reviewer’s complaint about a drama unwilling to register that which, on the immediately available evidence of the senses, was then seen to be making the Putnam Avenue trolleycar rise to the towers along a buttress’s curve. As of 1908, Hart was only a nine-year-old in Cleveland, waiting. But the bridge was already open for business. 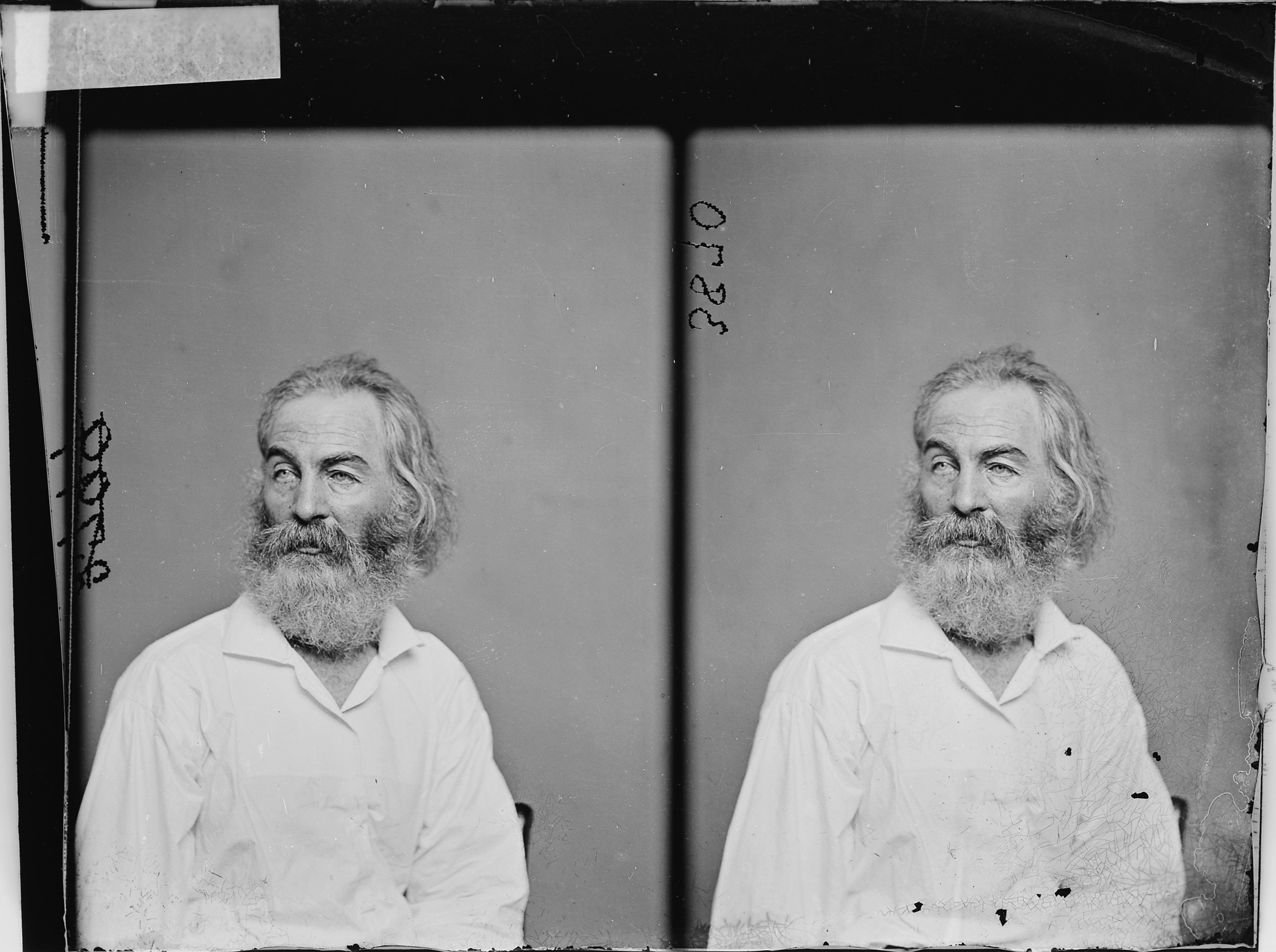 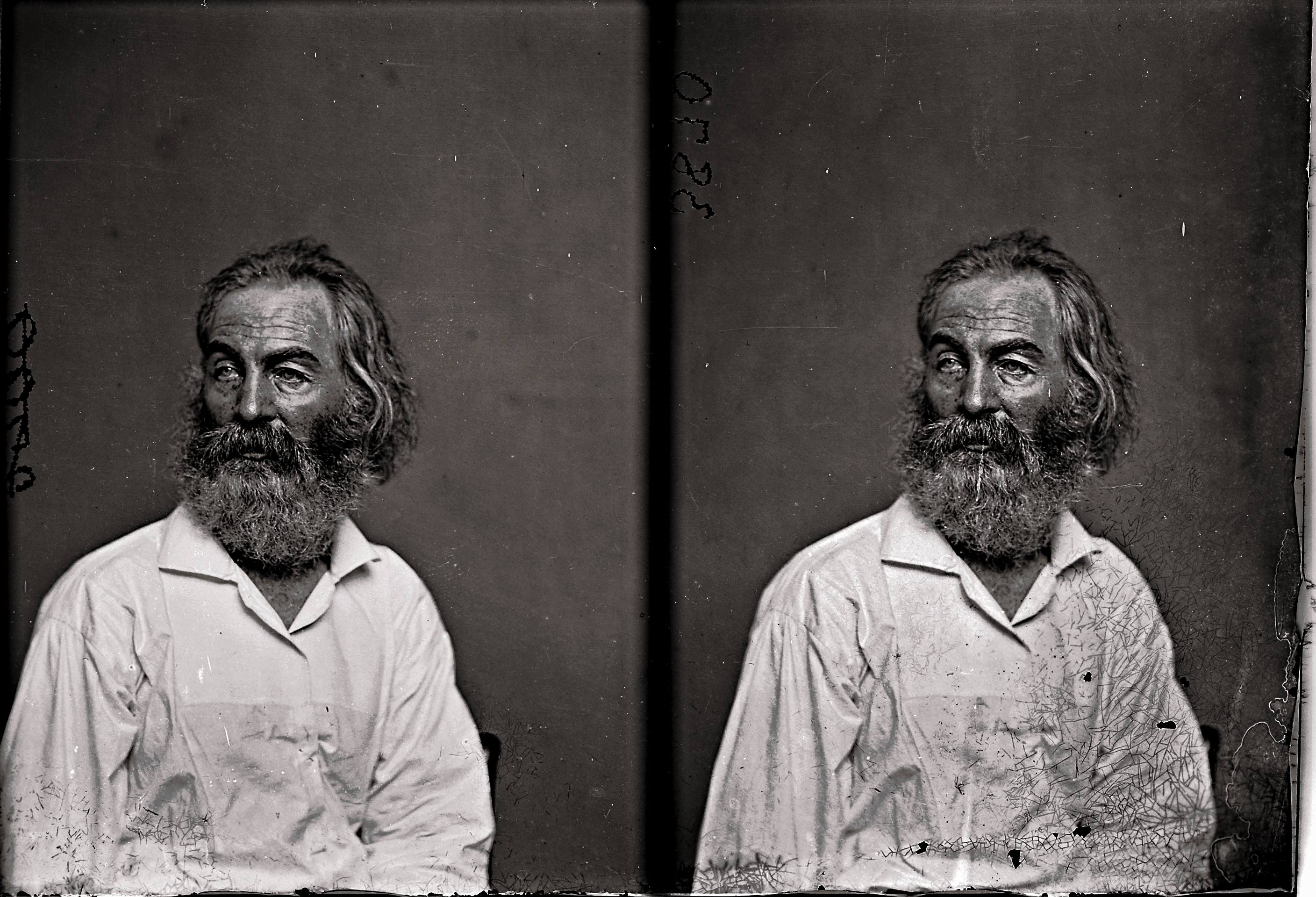 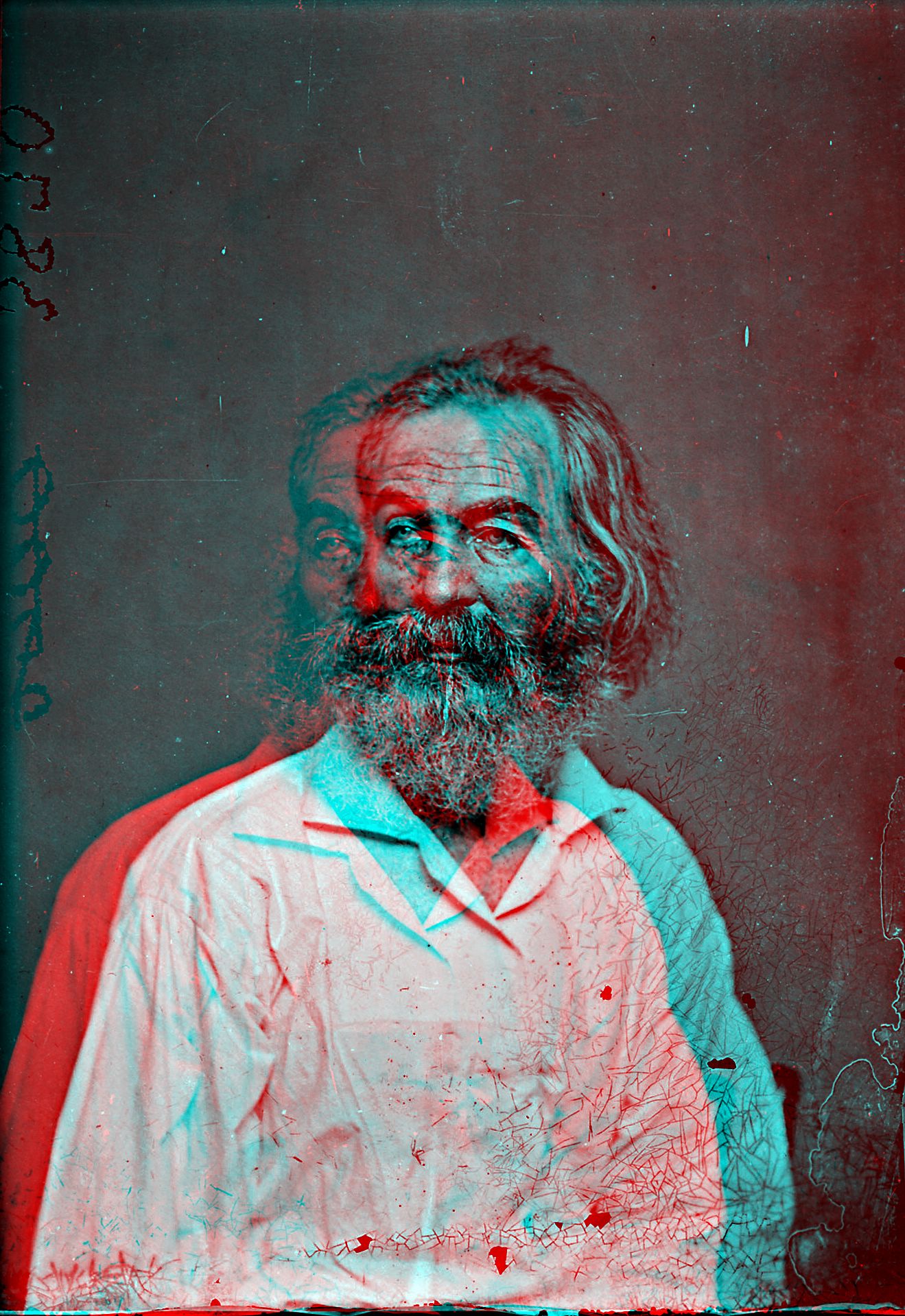 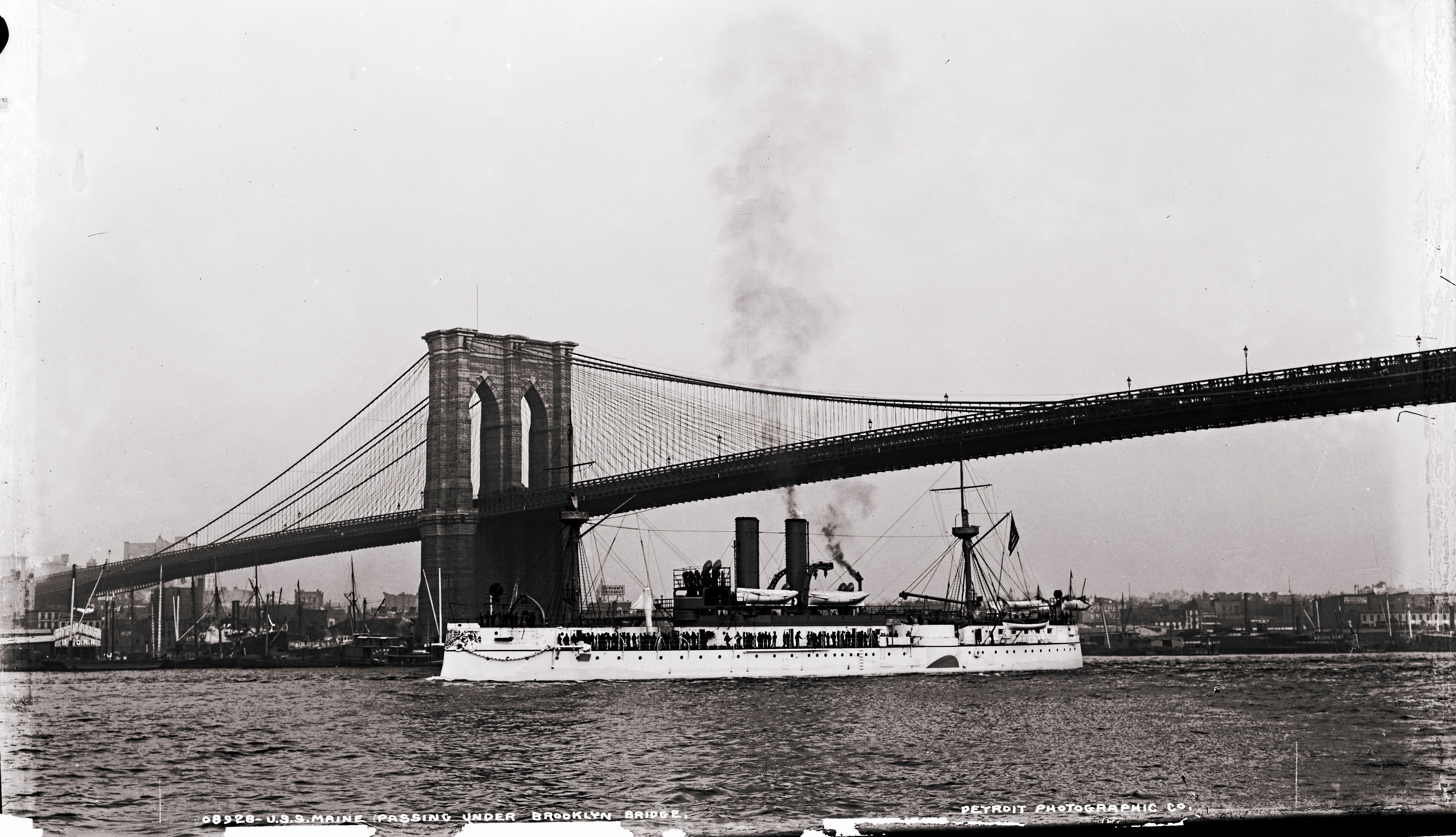 Both images photoshopped. Click to enlarge. For information about photographs of Whitman, including other stereographs, see Ed Folsom and Ted Genoways, “‘This Heart’s Geography’s Map’: The Photographs of Walt Whitman,” http://www.vqronline.org/vqr-gallery/1880s-photographs-walt-whitman 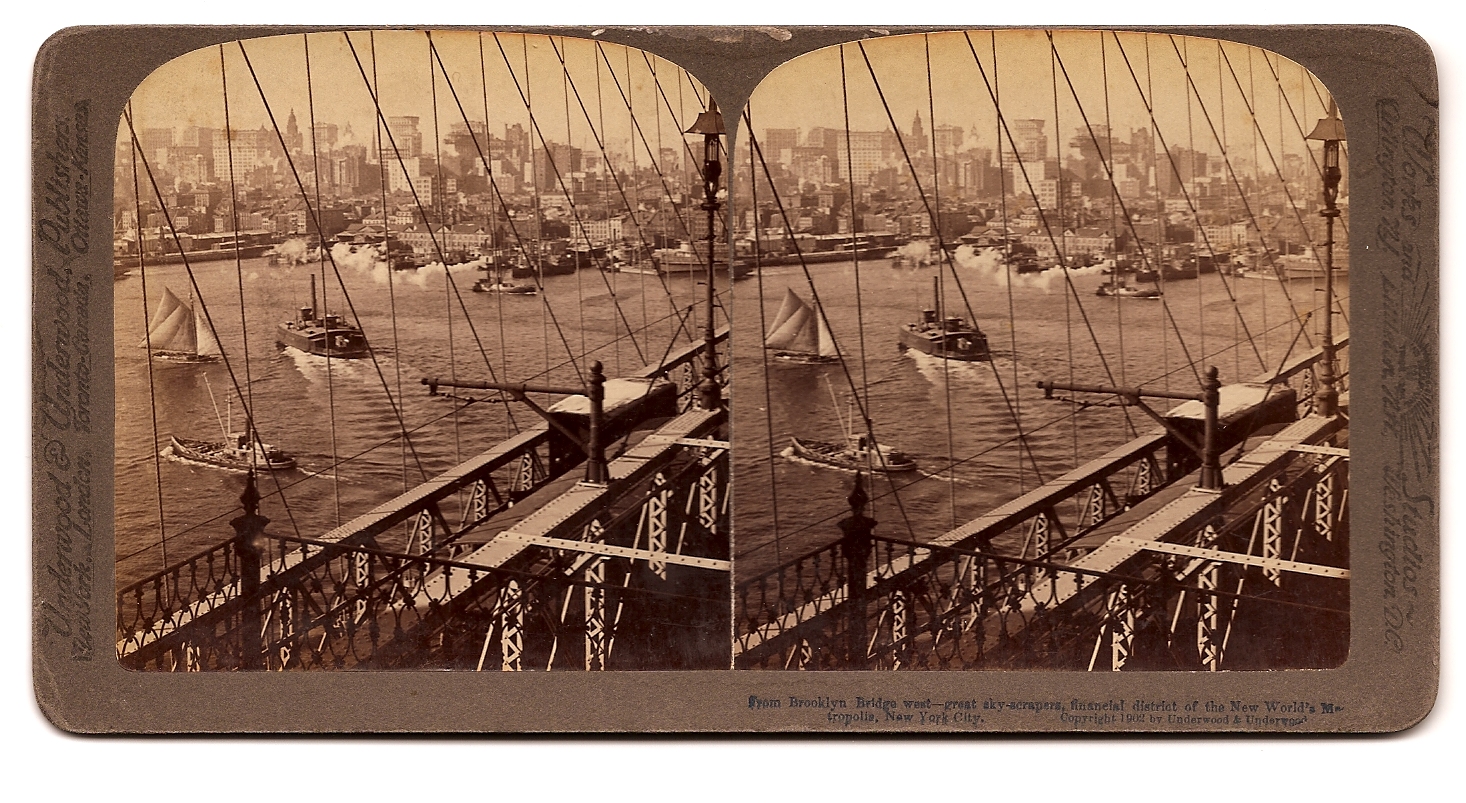 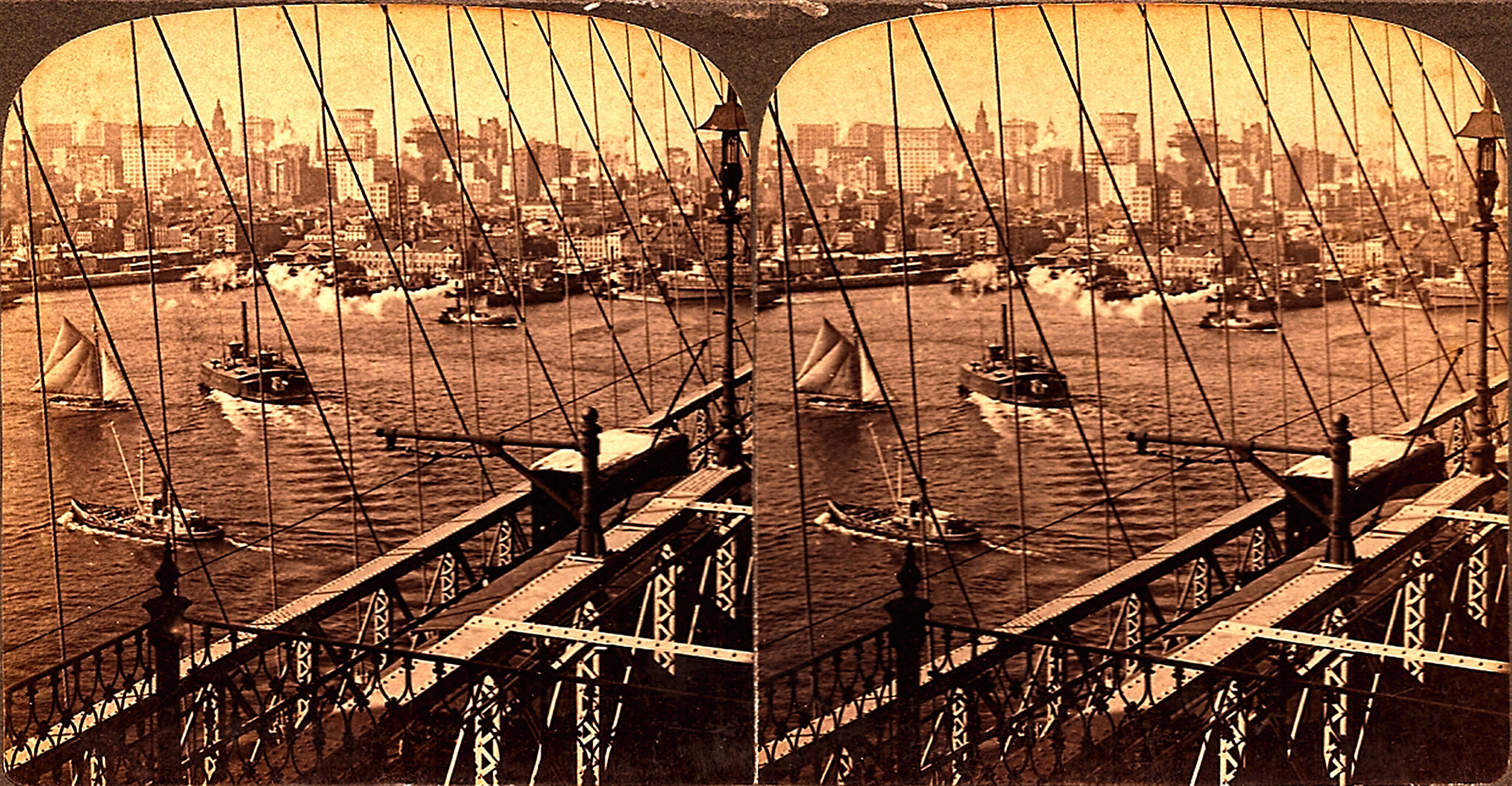 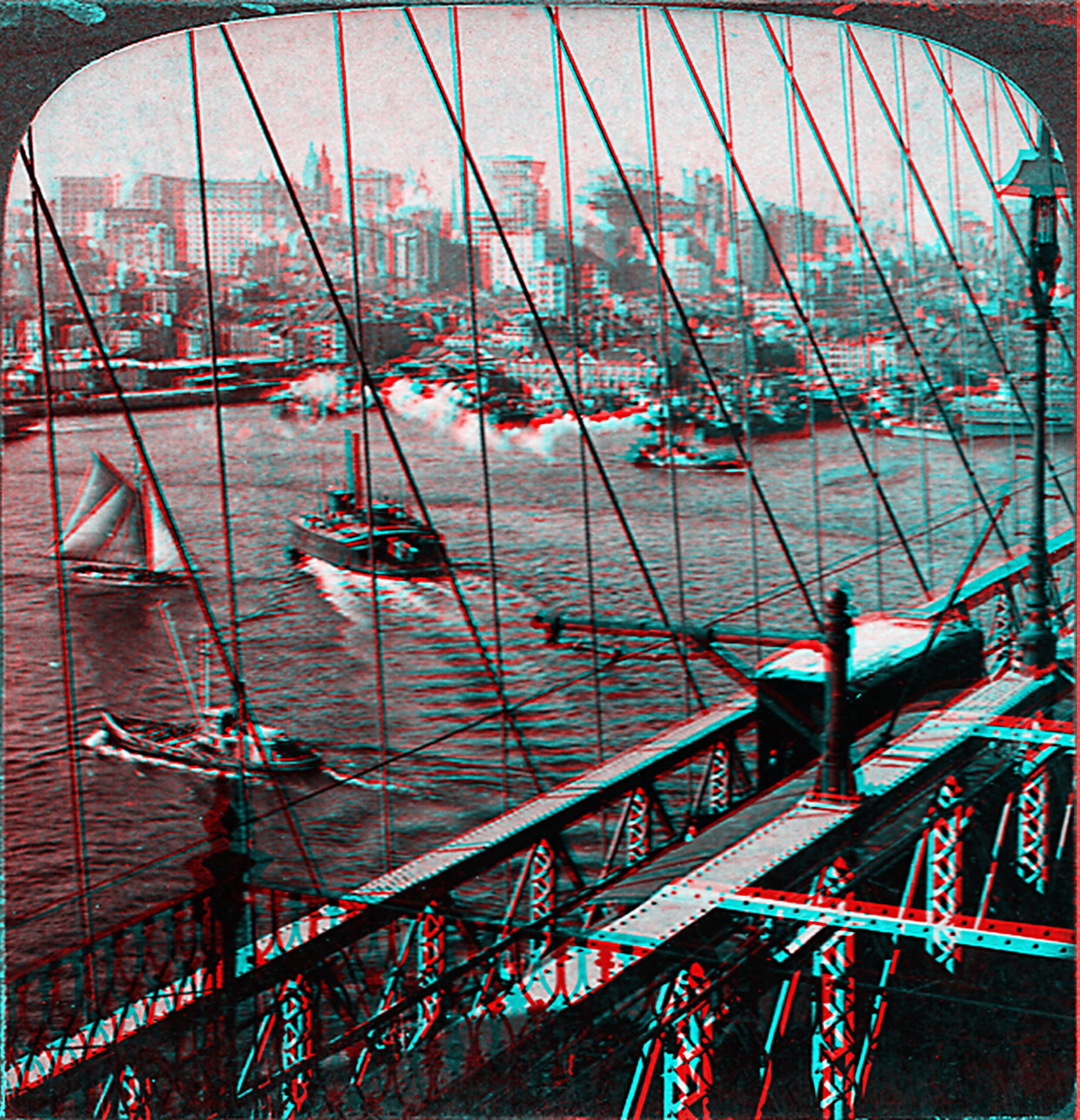