The stereo pair with contrast and detail restored: 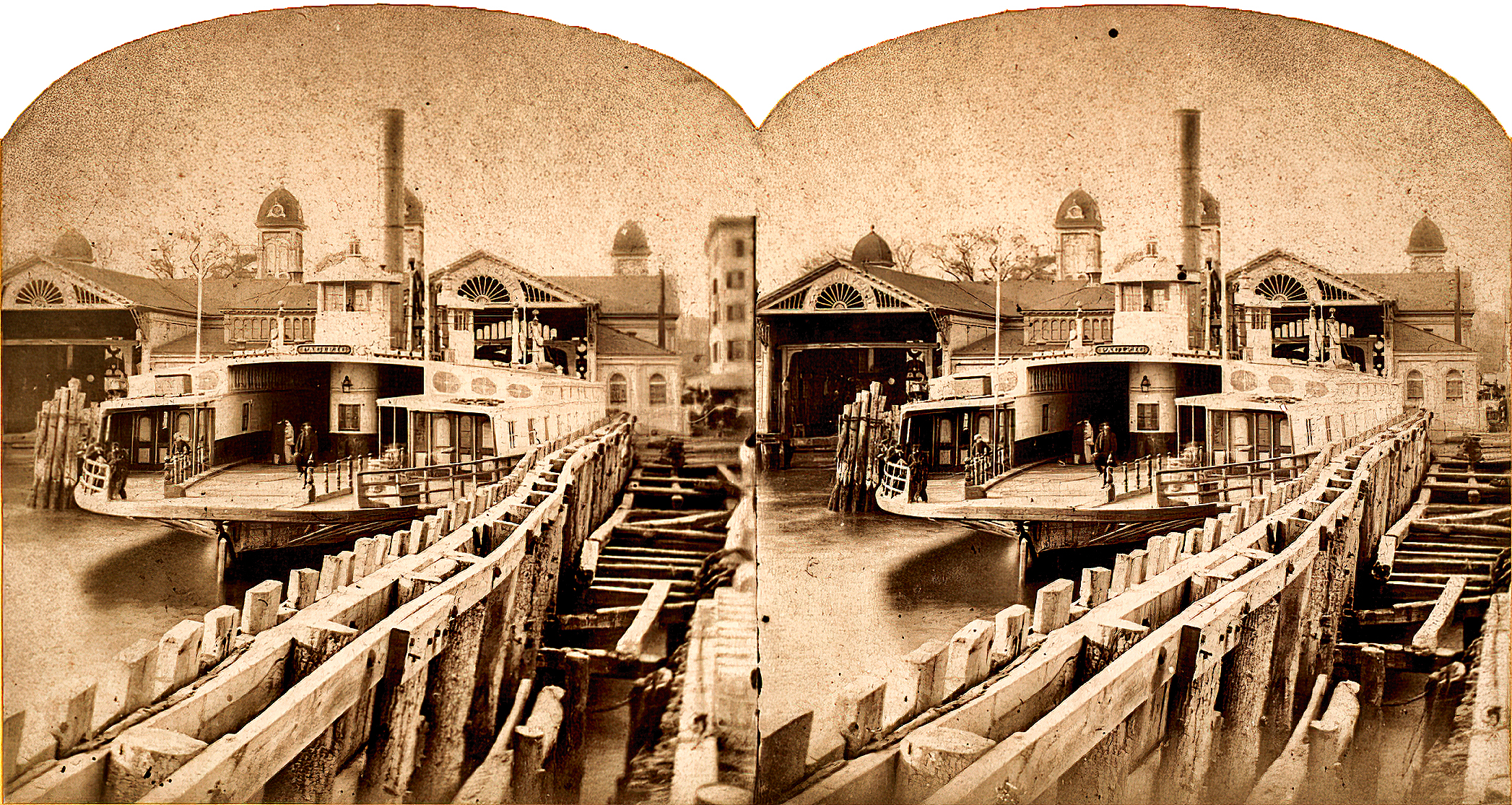 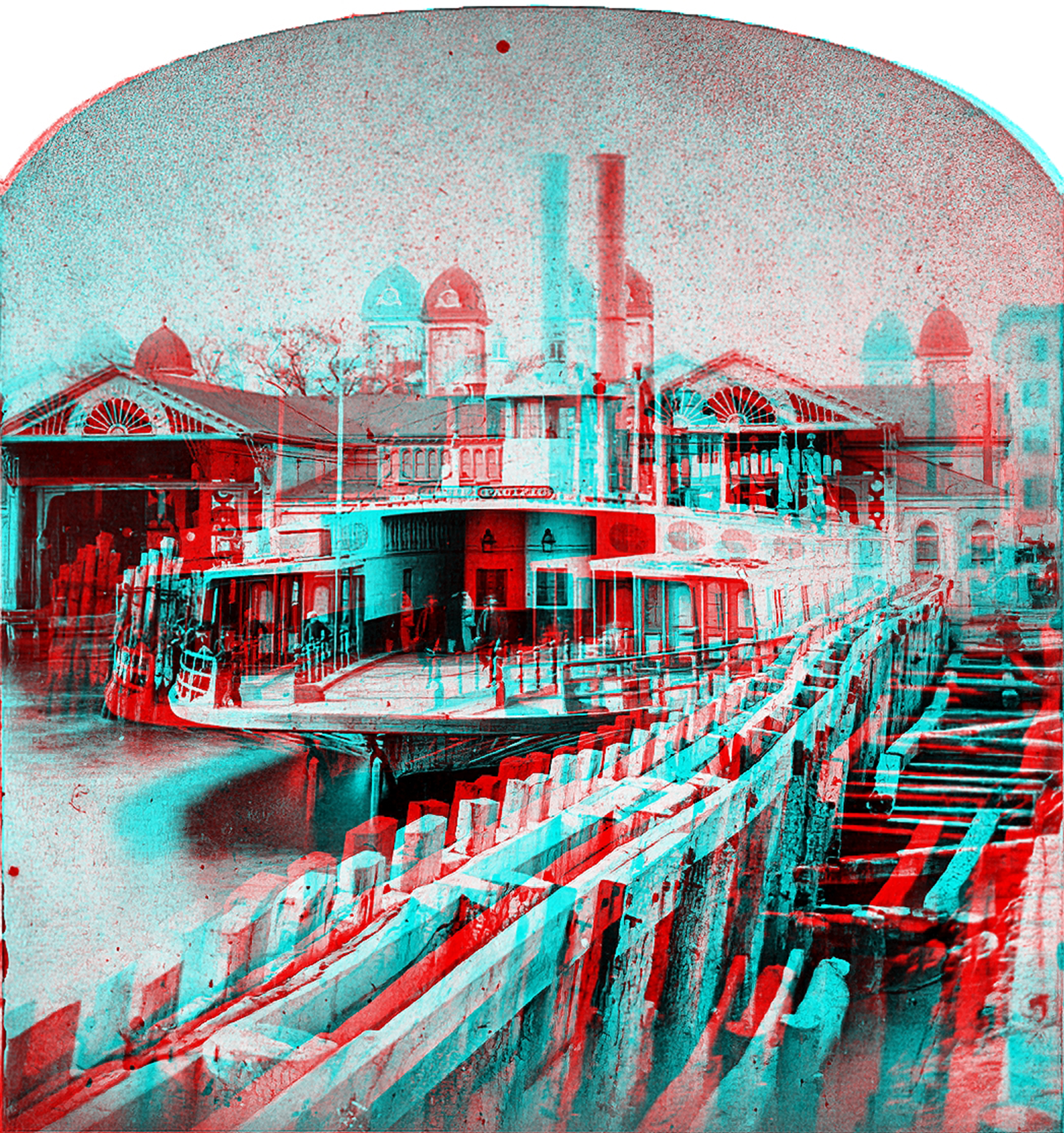 During most of 1865, the year when this photograph was probably taken, Walt Whitman was back in Washington after spending the second half of 1864 in Brooklyn on sick leave. Still, he was in Brooklyn again on the April day when he and his mother read of the death of Abraham Lincoln. So it may just be historically possible that one of the men you see here on the deck of the ferry Pacific happens to be Walt, and Walt is asking you:

Who was to know what should come home to me?
Who knows but I am enjoying this?
Who knows, for all the distance, but I am as good as looking at you now, for all you cannot see me?

The stereo pair with contrast and detail restored 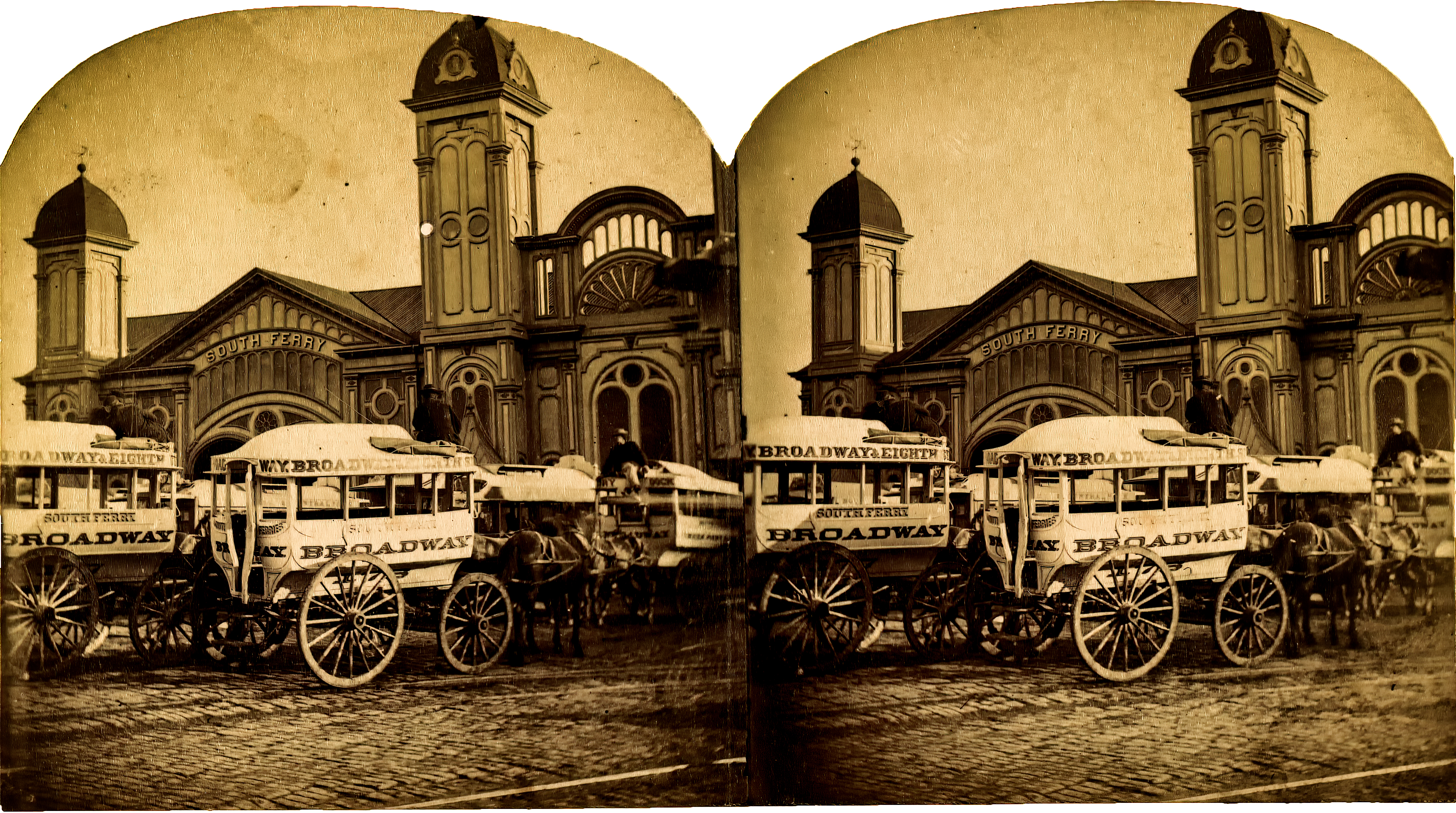 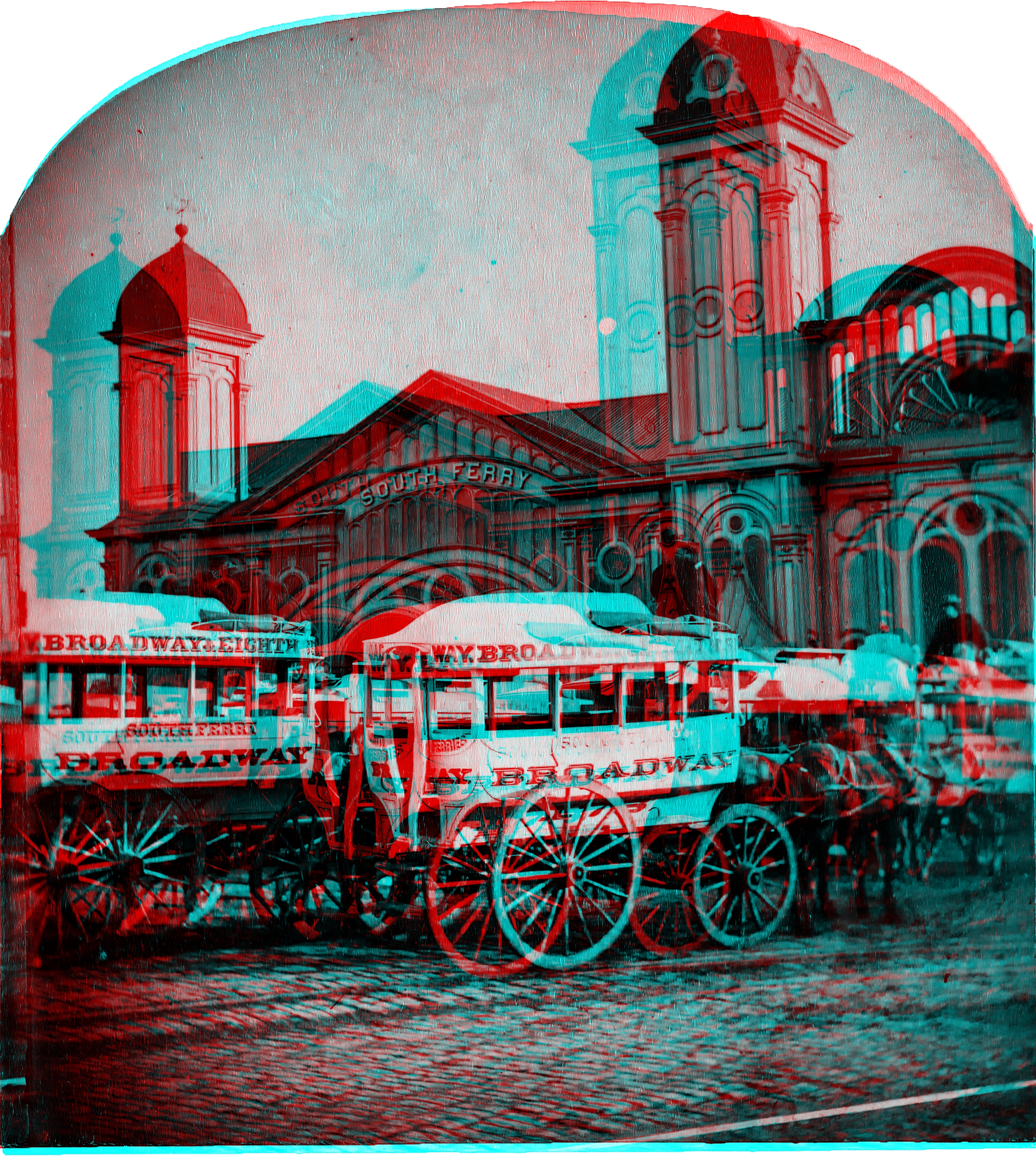 Touch me, touch the palm of your hand to my body as I pass,
Be not afraid of my body.

Some of the photographs in Binh Danh and Robert Schultz’s War Memoranda: Photography, Walt Whitman, and Memorials (Roanoke, Virginia: Taubman Museum of Art, 2019) are what Mr. Schultz calls chlorophyll prints: portraits of Whitman and of Civil War soldiers and their families, merged into images of leaves from trees growing in spaces where Whitman walked: his home, his battlefields. In the blog Lensculture, Schultz explains:

Lately I have traveled there with some regularity to browse the grounds, to look from the high situation of the house across the Rappahannock to the spires of old Fredericksburg, to photograph the catalpas, and, with permission, to pluck a leaf from the trees that have grown from ground soaked by what Whitman called the “butcher’s shambles” of war. I carry the leaf to my car, where I lay it on a felt-covered board, then cover it with a plastic transparency and a sheet of glass. The transparency is printed with a soldier’s portrait…and when I clip these layers together I place the board in the back window of my car where the sun pours down. As I drive home to Roanoke, some three and a half hours away, the leaf will begin to change. Where the transparency is clear the leaf will bleach, and the soldier’s image will appear, embodied in the leaf’s sheltered pigments. 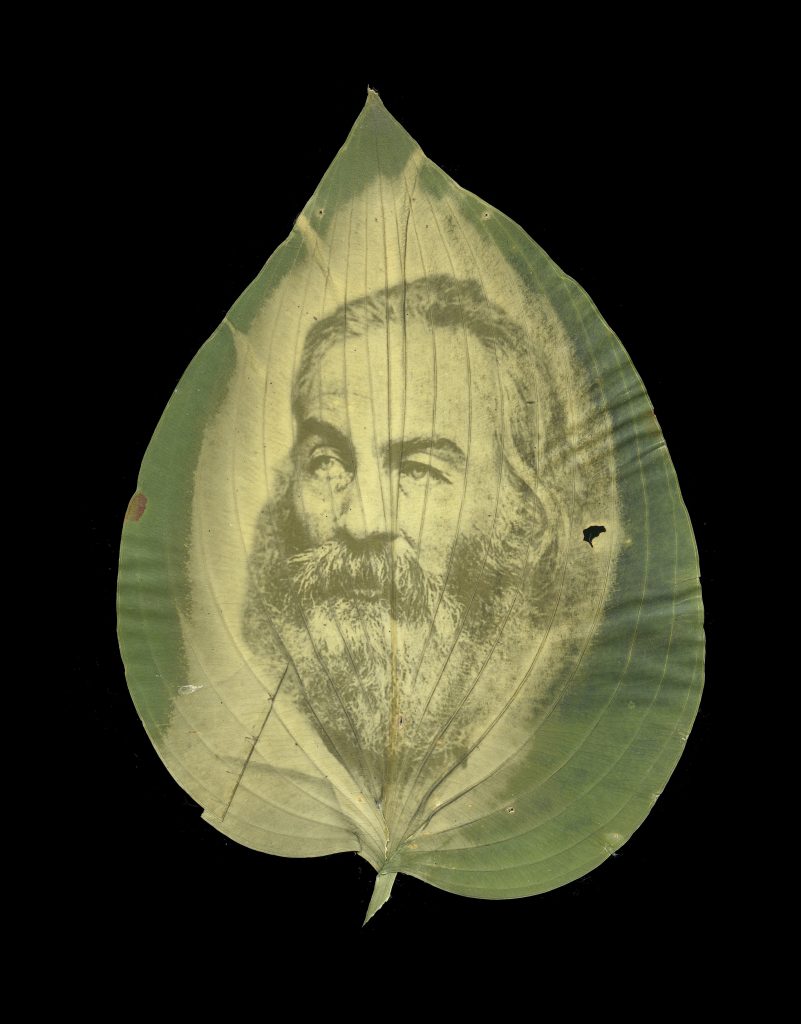 and in their book each one is provided with a double history: not just a bibliographical citation of the photograph but a genealogy of the tree that bore the leaf: what its species was, where in Whitman’s cosmos it grew. Writing out the details of that genealogy and creating a simulacrum of the leaf’s life, Schultz seems to be channeling Whitman into his own language. He plucks, he carries — those Whitman verbs — and above all he says I. The process of printing occurs in his car as it homes toward his studio while the sun pours down. He feels its heat, and in the studio he will deal in the dark with its light. The words echo Whitman’s poem of death and life When Lilacs Last in the Dooryard Bloom’d, while the chlorophyll print process echoes the life-in-death of Song of Myself:

By my life-lumps! becoming already a creator,
Putting myself here and now to the ambush’d womb of the shadows.

Or, to generalize: Danh’s and Schultz’s and Whitman’s biographical plants are arrayed in a human context — Danh’s and Schultz’s and Whitman’s. But if there should exist a natural form coming into being as if it were escaping human context, how would we know it humanly, and how could we speak of it in human language? How, for instance, might we come to terms with this? 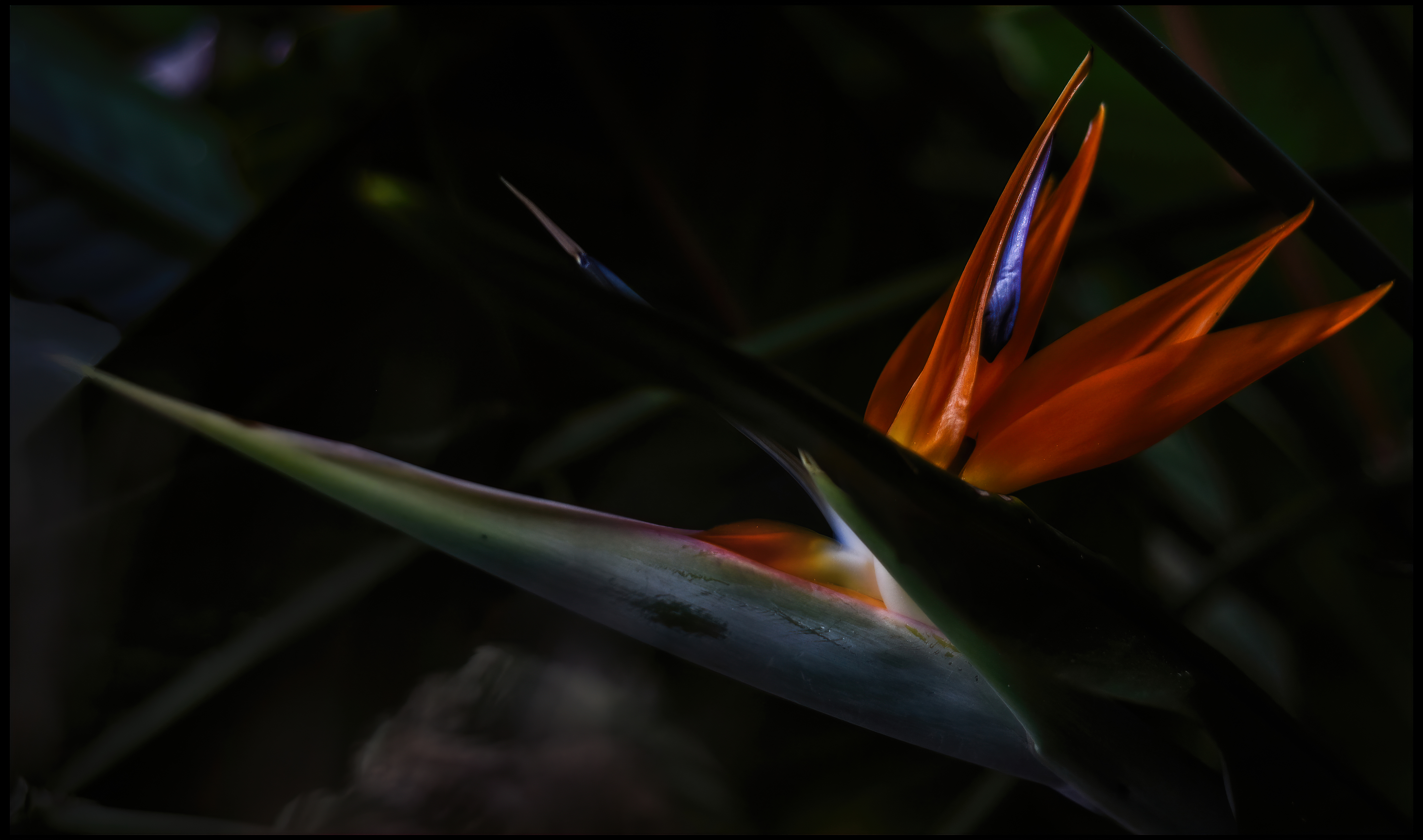 It was almost hidden, on a cloudy day, low toward the ground under concealing strata of leaves. If I were to write “I” about the experience of seeing it for the first time, I think I would be trespassing upon a darkness proper to the plant alone: one where I shouldn’t wish to be because I can’t be. This plant is a garden plant not native to the Hawaiian island where I photographed and Photoshopped it, so I am no more a nature photographer than Banh or Schultz is. Still, when I entered the blossom’s light zone I didn’t find myself thinking of my camera or myself. Instead, I found myself thinking of the light before me as if it came from a body different in kind from mine: stranger and, in ways that disturb me when I try to understand them in retrospect, full of different experience.

Whitman doesn’t seem to help; he doesn’t seem able to come naked into the presence of life until he has first taken off the clothes he was born in. But in these different lines from Lycidas you can see Milton revising a standard sunrise term, the glimmering eyelids of the morn, into something less “poetic” but more specifically applicable to his line’s evocation: the opening eyelids of the morn. The line no longer evokes cold cream; it asks us only to remember what it has been to see an eye opening to morning light and a body coming back from dark into the seen. This body has been wardrobeless from the start. What Milton did was to simplify his language until it contained only the essential non-language that came to it not from a lexicon but from a body and a sky.

And simplification (at least this time, for the length of that line) may be enough. A sunrise or a flower, what we come to understand doesn’t need a war or a history or a sense of the human to make it mean. Its language needs only the third person. It doesn’t sing a song, let alone a song of itself. Before my camera came along, this orange and blue and white shape was doing just fine by itself in the dark: a citizen only of silent undergrowth, outgrowing through it from a center filled with something that needn’t after all be spoken of in words, or at least in socially conscious Walt-words. Whatever that was, it seemed, at the moment, to be a private light helping me read the unique language proper to the idea of one.

The lines quoted from Song of Myself are the last two lines of section 41.

The Trinity College manuscript of Lycidas is online at http://trin-sites-pub.trin.cam.ac.uk/james/viewpage.php?index=1394

Cavafy’s “Days of 1901” is missing some last words. On the page, this elegy sings the recession into time of something that can return only at longer and longer intervals. On its returns it still looks like love, but what there is to see of that love is now coarsening and blurring under time’s accreting memories. The memories are of youth and purity: qualities that are now less accessible to the touch of sensitivity than they were, hidden farther and farther beneath the darkening eaves of upper limits. Youth goes louche, and the days of 1901 go historical. 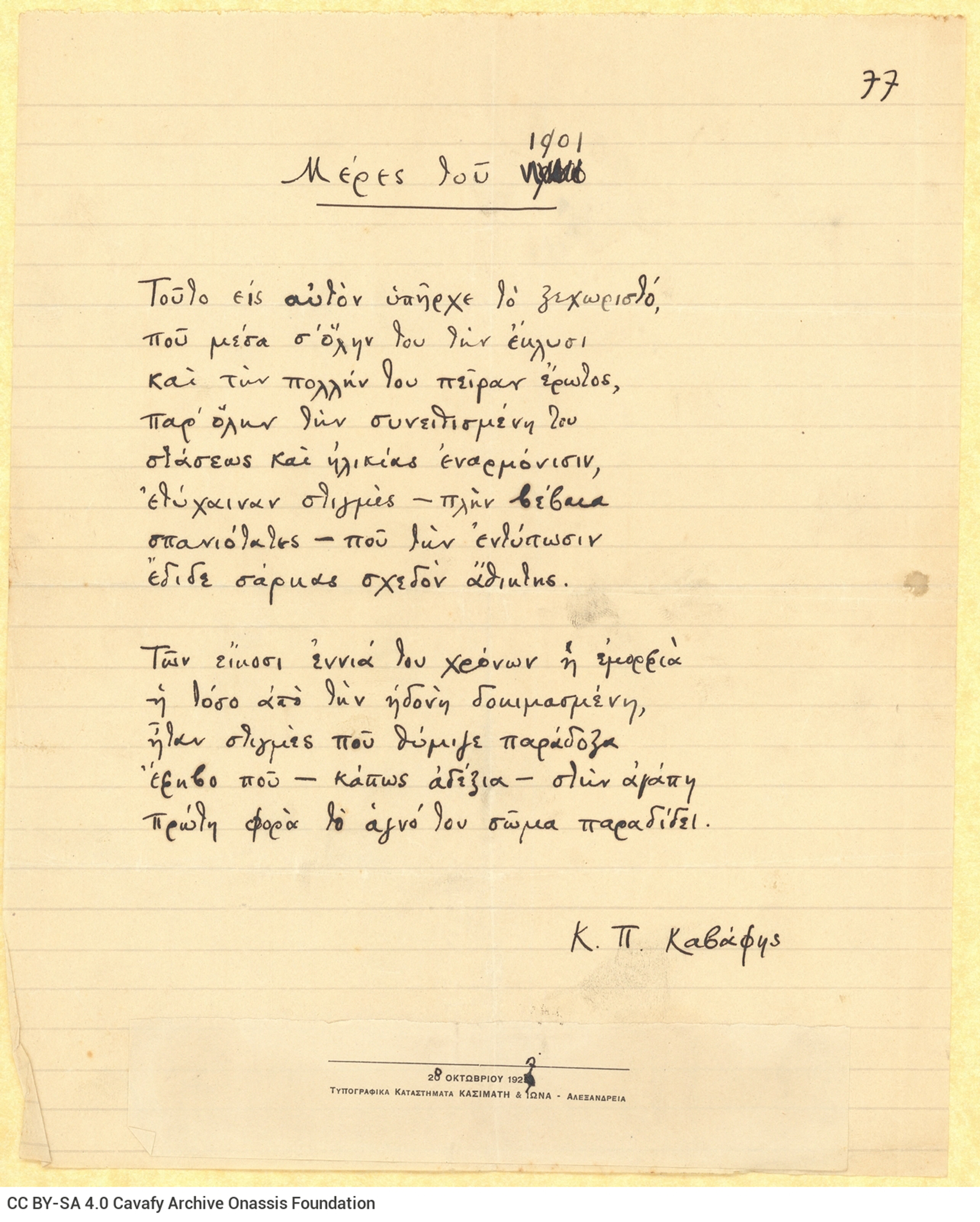 Formally, too, the poem’s wit is about the past tense. “I am a reminder that there is nothing new about what you feel,” says Cavafy’s Greek sonnet, and it says that on the authority of being in Greek, and a sonnet. But the little hint of budding life within the past culminates in a line so unhistorical that it hasn’t yet taken recorded form. Classical norms would grant “Days of 1901” one more line to bring to a merciful reconciliation the contradiction between immediate beauty and the poignancy of having lived prior, but here at this poem’s end there is only erasure. There ought to be six lines extending all the way to the end, and the prosodic category-name for that imperative, sestet, implies that at the end there ought to be six because a sonnet has earned the right to say and mean that there always have been six. But this sestet begins (in Daniel Mendelsohn’s translation), “The beauty of his nine-and-twenty years.” In Cavafy’s Alexandria, there can be no always. The days of 1901 are partially in ruins, like all the other days.

Look toward the margins and you’ll notice that off the American coast the days of 1901 arrived with an escort of battleships. Among the squadron, the days’ beauty wasn’t the poignant beauty of an individual, like the beauty of Cavafy’s slowing, thickening 29-year-old; they were as bright and delicate and grateful to the touch as new clean well-printed banknotes. Theirs was a Daisy Buchanan beauty: the beauty whose defining quality is the being prized. Competing for the beauty, rich men raced yachts through those days, and the love of the collective that defines love for us was there to protect them in steel boats with flags that snapped in the wind, and the apparatus of history was at hand to inscribe the rushing waves with records of love’s eager speed in a perennial Roman typeface.

The octave of Cavafy’s sonnet read,

The key word was “Almost,” probably to be read as an ironic indirect aside. But in 1901 America a different flesh found its voice in the straightforward positivity of Whitman’s “As Adam Early in the Morning,”

Touch me, touch the palm of your hand to my body as I pass.

In its Walt warble it added: “Because I am passing through this watery element as fast as can be, and time is money.”