Two of the soldiers have lost their faces to motion, and the form of a third, passing rapidly behind a shroud, has been reduced all the way to blur. Simplified and diminished, he will never again be anything except a blemish on his own record. If we’re even to imagine visualizing him as a man, we’ll have to work outside the photographic values of his image frame — for instance, at a carrel in an archive. 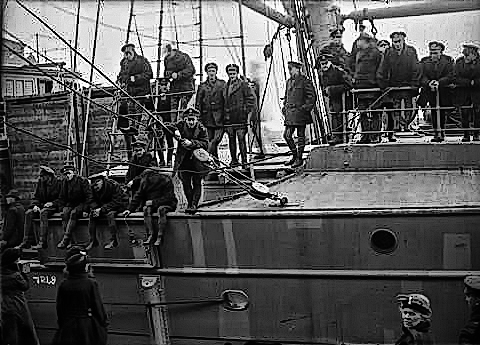 As it happens, some carrel labor has already been expended because this image is already resident in an archive: the archive of the city of Vancouver, British Columbia, where it has been enrolled in history with a caption (“Empress of Japan leaving for Vladivostock [sic]”) and a tentative metaphysics: “Date(s) [ca. 1919] (Creation).”

The archaeologist who descends to the sub-basement of such an archive and begins to dig there will be able to unearth nothing but history. The artifacts that come to light under the fluorescents of the archive will be visible only in history’s delimiting temporal way: by reference to what lies buried in time before them and what will be interred in time afterward. Immediately, in the present, we are in the act of seeing something in the pit, but it’s the nature of archives to defer the understanding of what they show us. In the archive, everything that once was seen in unarchived immediacy has passed under an opaque patina of memory and explanation. When we try to get closer to the formerly immediate for a second look, that new outer layer will repel us. We won’t be able to understand how the light falls in this image, for instance, unless we can chisel it free from the archive’s scrupulously blurring word “Circa.”

Fortunately, the archive also provides us with a chisel. The moment they passed under archival control, everything in and around this photograph — the military uniforms, the date, the words Empress of Japan and Vladivostok — were organized by archive into an extra-photographic history — in this case, the history of the allied expeditionary force to Siberia that attempted to intervene against the Bolsheviks during the Russian civil war. Once we’re equipped with information like that, we’ll find it easy to chisel our way through the stacks to (for instance) a University of Victoria website called “Canada’s Siberian Expedition” at

And there we’ll be able to work on the archive’s replica in words of what it may be that we once saw in an image: a ship on whose deck soldiers sit and stand and vanish into blur. As the archive built its facsimile man by man, it became one more document in the archival literature whose one story always ends, “As if they were still alive.” There in the archive, a caption now carols that the replica ship is, and will be as long as the archive endures, that which history has lovingly named, forever! Empress of Japan. In token thereof, the archive has also bestowed on the ship a choice of instants of namable, rememberable being: either October 11, 1918, or February 12, 1919, the only two times in history when the pre-facsimile Empress of Japan, carrying soldiers, weighed anchor in Victoria and set out for Vladivostok.

Heartened by feeling ourselves closer to something that existed before it could be archived, we may now try to see one of those two instants in detail. We might begin wondering, for instance, what the people in this image said when circumstances brought them together for a shared last moment under the rainy sky of Victoria, British Columbia. Did they talk about, for instance, the weather? As soon as we think that particular trivial thought, we’ll notice that nobody in this picture is bundled up against the cold, and then we’ll be all primed to join the men on the ship in some ice-breaking gossip. From the archive at

we’ll learn that there was no weather station in Victoria in 1918-19, but just across the strait in Vancouver the high temperatures for the two possible sailing dates of the Empress of Japan were 13.9 C (57 F) on October 11, 1918, and 5 C (41 F) on February 12, 1919. Welcomed into the archive and accessioned into the stacks surrounding the replica ship, this sociable little pair of new readings on the thermometer could fill out a whole archival newspaper. The paper’s fashion writer, for instance, could point out that the models shipping out on the replica are dressed for a cool fall day, not a cold winter day. Fine distinctions of couture will have acquired a significance, and that acquisition will reduce the degrees of historical freedom within the image’s range of datability to near-zero. Because the men’s hands are ungloved, their picture was almost certainly taken not in February but in October.

The paper’s feature writer could then check with other dates in the archive and report back that the photograph’s October reality grants it special historiographic status: the unique depiction of the very first departure into history of the Canadian expedition. If that still seems trivial, a future book reviewer suffering from Titanic in the head could hit the keystroke combination for Sentimental and alert us by bulletin to what would happen one month to the day after October 11, 1918: the end of the Great War. Sooner or later, right? we’ll be able to stop talking about the weather and move on to important things.

But somehow I can’t think of any important things. Stuck in the archive, I’m still just killing time by talking about the weather before the ship leaves and we can start getting lurid about the Bolsheviks.

After all, my insensitivity is not unreasonable. While the replica is still pierside in the archive, the archive will cautiously remind us that Canada’s part in the Siberian Intervention of 1918-1922 was only a token contribution which ended after six months without a single Canadian death in combat. On the other hand and not a part of the reminder, Rasputin . . .

Now that was an interesting story. And the smudge of the barely worth remembering that’s now stuck to the top of my blogpost is also tiny.

In the course of time its history has suffered entropic loss, too. With Photoshop I’ve been able to reverse some of the chemical damage. But because the image and its story were never anything but small, I can’t restore them to a life-size that they never possessed. Try to enlarge your understanding of the little you can see and it will immediately vanish beneath pixelation and blur. Out of sight under the blur, the image’s many men and one woman must remain beyond the reach of archive’s power to grant eternal life in replica. The real collective image of their fraction of a second in history will continue being unseen in the dark. It will remain the archive’s secret.

And locked within its tiny casing will remain one more secret, image’s own: a knowable visible enlargeable generalizable meaning permanently sealed against being understood as what it once, for a fraction of a second on October 11, 1918, was.