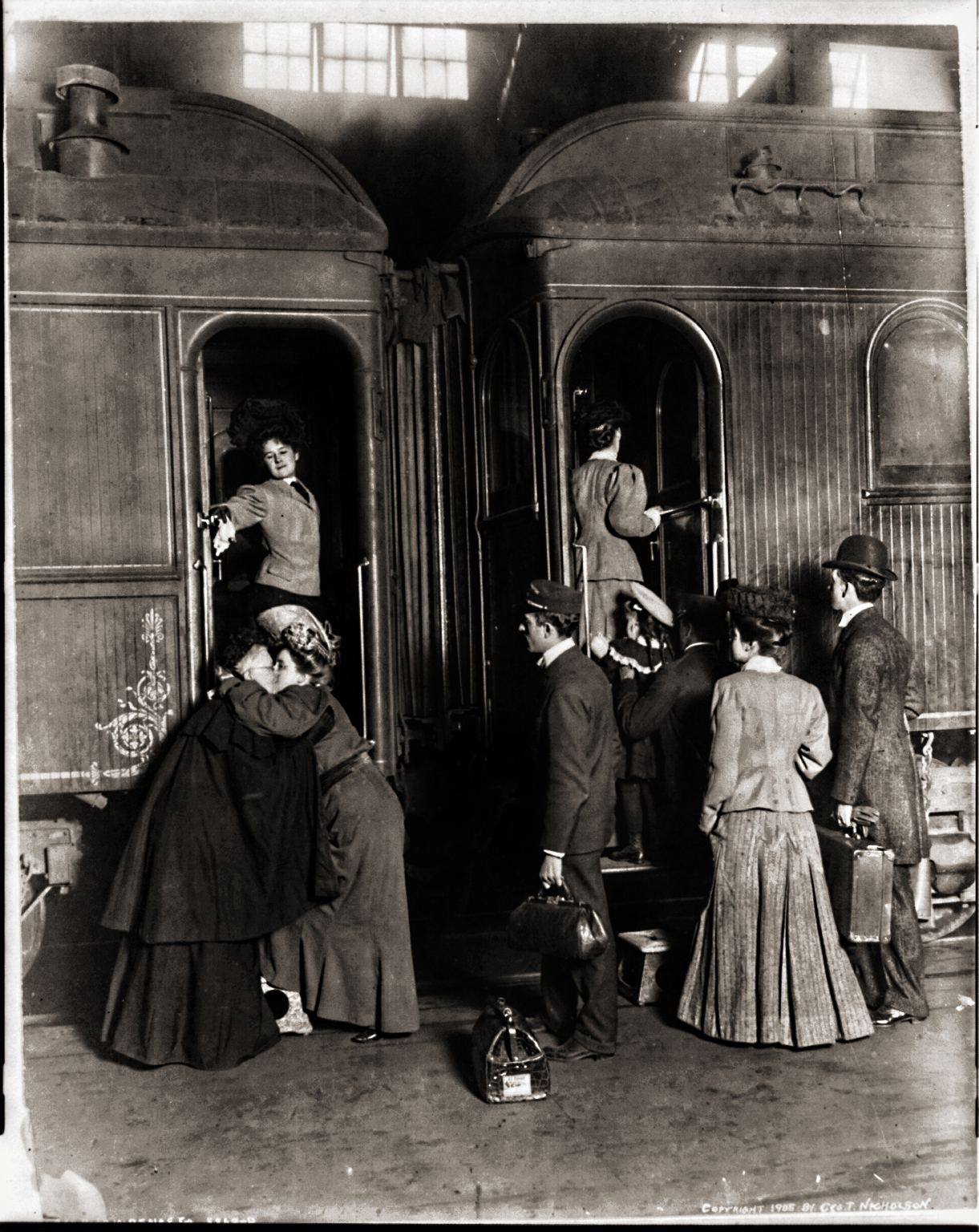 As he waits to board the car on the right, the young man’s derby seems to be anchored to his head by a cord running to a clip behind his ear. The effect seems disproportionately serious, like the obsessed drawings in one of those books about funny patents. Furthermore, in the years since this photograph from 1905 was taken, the derby itself has acquired comical connotations, and men’s hats in general have gone ironic. But if we treat the image with the common intellectual decency of trying to see it as of 1905, it will go tender on us. The young man and the pretty little woman next to him then might be, oh, Gabriel and Gretta Conroy from “The Dead,” and the little girl in her sailor suit might be one of their children. Backs turned on us who look at them, they are off now to wherever it is that Gabriel and Gretta will voyage through their long snowy night.

Simultaneously, from the door of the car on the left, a young woman is watching two more women say goodbye. One of them, middle-aged, has a foot already on the trainman’s portable step. She is the one who will be leaving on this train, and the car she is about to board has been given a 1905 purpose that, like the derby, is no longer in use: ladies’ dressing room. She seems emotionally undressed herself as she exchanges a kiss with an older woman, but once she boards the dressing room she will become fully clad in the wear of 1905. As to the older woman, she is already dressed because she won’t be boarding the dressing room, and her clothes are another specialization for the seen universe of 1905.

The clothes are called weeds, and weeds were the mourning wear dictated for widows in 1905 America. The word “weed,” singular, had meant “clothing” for about a thousand years before then, from the ninth century through the nineteenth, but it soon acquired specialized meanings which by 1905 had diminished only to one. Some time before 1905, “weed” came to refer only to a widow’s veil, and then (says the Oxford English Dictionary) the rest of the wardrobe followed and became an outfit strictly in the plural.

But the fashions of signifying death didn’t stop changing with that, and as the term “weeds” became incomprehensible in time, the related terms “dressing room” and “lady” also had to be read in new lights. Flash photography, too, is no longer executed with a frying pan full of powdered magnesium, and so we see in new lights as well. On the evidence of this photograph, the fourth wall stood closer to the backdrop in 1905 than it stands now, and the farewell speech in between was more aglare with high contrast.

But we don’t seem able now to read the expression on the face of the third actress, the one standing at the door of her dressing room. In the glare of 1905 it ought to be immediately understandable, but the immediate seems to have vanished from this image. Requiring a mediation that the image can’t supply, the expression on the woman’s face is one more term dated strictly 1905. Time-stamped, it is to be understood as a word extracted from a body language that is no longer comprehensible now.

It has changed, and in the disembodied language you’re now reading we can’t know how. But at least we can say why. Moments after George T. Nicholson took this picture, the ladies’ dressing room rolled away into what’s called forever after, and in the shed whose flashlit form remained in memory over the darkened track, nothing remained.