August 9, 1914: at the beginning of World War I, the American Line ship New York arrives in New York from Southampton, having departed from an England not yet at war.

In Southampton, the New York had become an interesting footnote to the history of tragedy two years earlier, on April 10, 1912, when suction generated by the propellers of the departing Titanic tore the smaller ship from its mooring and drew it toward the Titanic’s stern. Only skillful ship-handling by the Titanic’s Captain Edward J. Smith averted a collision and allowed the Titanic to resume its journey toward the iceberg. That enriches the New York’s log for April 10, 1912, with irony. By comparison, the log for any other day in the ship’s long history (1888-1923) might as well be blank.

So this second image of the New York on August 9, 1914, is all but meaningless to the kind of history that consists in a log of things seen. The second image was taken closer to the ship in space and time, but proximity has left little ironic context within the image frame for a log’s words to work on. If anything, the camera’s privileged proximity has erased the rest of the contextual universe from consideration. Unlike the first image, this one fills the visual field solely with itself. There, it is nothing but a view of morally neutral steel, and of some human flesh seen in incidental connection with the steel. 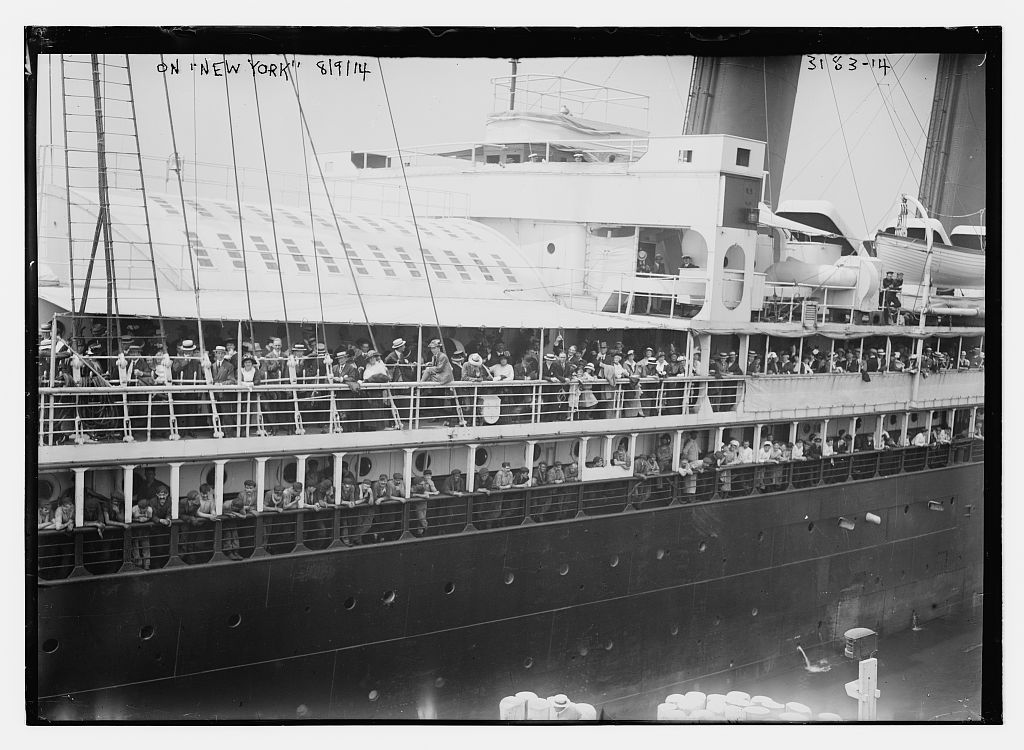 But look anyway at these smiling faces steel-engraved into the image. They are among the first refugee photographs of the Great War, and that is their claim on us and on memory. The claim isn’t visible within the image, however. Under that limiting spectral circumstance, the bodies pressed against a port-side railing on board the New York can be seen now only as representations of what is not present to the eye. As of August 9, 1914, in New York, the war zone is still elsewhere. We see the faces that have arrived from there, but as of August 9 we’ll never yet be ready to understand what there will look like and how history will remember it.

Instead, we (don’t we? don’t you?) scroll back up to look again at the pretty ship New York and its busily helping tugs, two of whom have names we can make out: Claremont and Excelsior. Excelsior is the motto of New York State and also the title of an easy-to-read inspirational poem by Longfellow, composed during an era when great ships were being strenuously conceived. But August 9, 1914, was one of the dates when reading poetry began getting harder. If you come close enough now to this picture of a ship approaching land, you may feel the little zephyr of a closing book.