In an art of movement we have no reason to devote our particular attention to contemporary man.

The machine makes us ashamed of man’s inability to control himself, but what are we to do if electricity’s unerring ways are more exciting to us than the disorderly haste of active men and the corrupting inertia of passive ones?

Saws dancing at a sawmill convey to us a joy more intimate and intelligible than that on human dance floors.

For his inability to control his movements, WE temporarily exclude man as a subject for film.

Our path leads through the poetry of machines, from the bungling citizen to the perfect electric man.

The acknowledgment section of Alex Danchev’s valuable anthology is human in a way that makes you want to applaud Vertov’s chorus line of dancing saws. Most but by no means all of Danchev’s bibliographical citations are set down in the order of their authors’ appearance in the book, without page numbers, and if his Vertov chapter has a named translator or source, I lost them in the confusion. No doubt: if you want your book orderly and alphabetical, with no acting out in the front matter, your best bet is to ask a machine.

Generalizing from what he saw, Dziga Vertov renamed his thinking apparatus “Kinok” (kino + oko + chelovek, “movie + eye + man”) in order to suggest that machines can fly us free from the limitations of our own clumsy humanity. Vertov also happened to live in a society where it appeared for a while that the commissars understood machines that way too. Certainly they did speak in machine language. 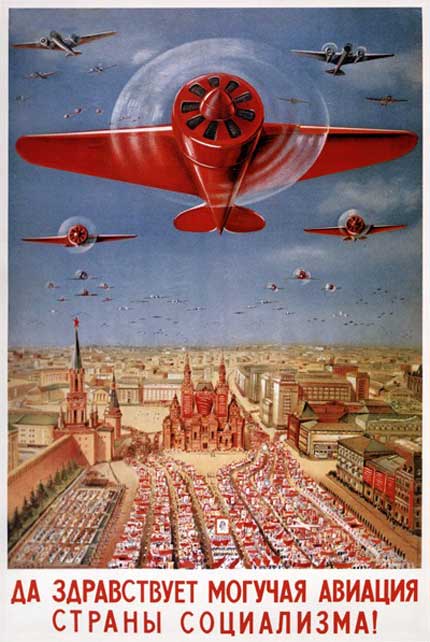 For the word aviatsiya in this poster’s caption, the Russian-English dictionaries I consulted offered me a choice between “aviation” and “aircraft,” and I adopted “air force” only after correction and contextualization by the Slavicists posting under the names of Hat and Moskva at http://languagehat.com (comment stream, 8 May 2011 post “The Little Seagulls.” Thanks!) But before I had gotten even that far, I was uncertain about Da zdravstvuyet, the imperative that starts the image’s caption. Long live the air force? Your health, air force? That would be the literal translation. No doubt the idiom works better in Russian, a language with grammatical gender where airplanes are masculine. ¡Viva!

However, this moth-shaped little red airplane does seem to be unambiguously alive, doesn’t it? To a Russian in 1939, to a Dziga Vertov, it would even have a claim on the family’s love, a name, and a nickname: the Polikarpov I-16 “Donkey,” stalwart in the Republican air force during the Spanish civil war. But we don’t need to be part of the family to think that those cute little wings are flapping as they bring the airplane up to our face for a kiss. Down on the ground, unable to see or understand the kiss, grownups are marching in neat rectangular blocks that pass around the Kremlin and then drift into larger blocks like floes in a river. We can’t see individual faces there, but we don’t need to. Formed into squads at ground level, they are the base that supports a single airborne image, and down there they’re interchangeable with any other rubble.

At the beginning of Triumph of the Will, the shadow of Hitler’s
airplane (circled) descends over a pavement of marching Nazis.

But we who wait for the little red airplane are watching from a high branch, far above the adult flagstone. We are in the airplane’s nest, and the little airplane is flapping its mighty way home to us.

Dziga Vertov called that emotionally charged machine motion kinchestvo, a word that translates as something like “movieness.” It was his way of imagining the body language of a society fully socialist. As an image, his conception could have looked something like Alexander Rodchenko’s famous poster for Eisenstein’s Potemkin: a dynamic geometry from which the human has been expelled: dumped over the side to drown in a stern Euclidean cosmos. 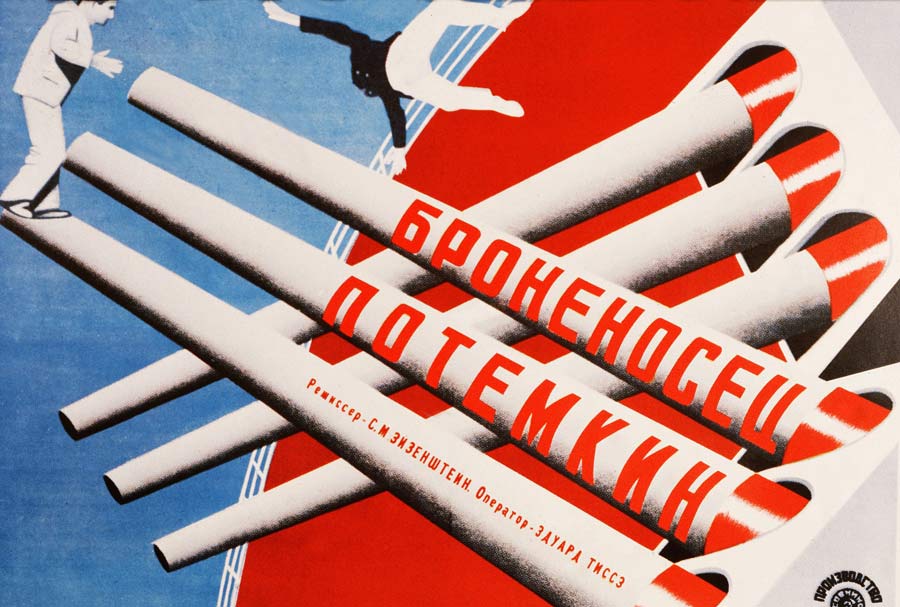 But not long after 1925, the year of Potemkin, the social geometries of Rodchenko and Vertov were suppressed in favor of the paysage moralisé of Socialist Realism. Rodchenko and Vertov envisioned a universe liberated from the human, or at least liberated from what the human had been until the Bolshevik Revolution, but Socialist Realism loved its machines in a cozier way. Socialist Realism inhabits a Disneyfied cosmos, and the simplifying single-point perspective prevailing there welcomes vision in and then lovingly prevents it from escaping.

The words in Rodchenko’s battleship poster have become part of the battleship. They are weapons, and they have struck the falling officer. He is now about to fall through the image plane and vanish. The arc of his fall teaches a geometry of terror. But in the Socialist-Realist universe there is no such teaching. It is not allowable. There, beyond a horizon drawn through the human, nothing may be conceived. Beyond the state, visualized as a march in ranks around the Kremlin and then back and around again, nothing. Beyond visual forms conceived in literary terms, as characters in a fable situated in space by a moral caption (THE LAND OF SOCIALISM!), nothing.

Likewise, for policy reasons: after the pure kinchestvo of Vertov’s Man with Movie Camera (1929), nothing. Man with Movie Camera is a dance of saws, but the last of Vertov’s Three Songs About Lenin (1934) is nothing but a twenty-minute version of the Kazakh national anthem at the end of Borat. Like the poster depicting mighty aircraft moved like marionettes along the illusion lines of perspective, Three Songs about Lenin is flat. It cannot move toward us or away from us. It is held flat against its screen by men in uniforms.

But the history of its flattening comes to us now with a cheerful moral, delivered airmail. In what’s called historical actuality, the cute little Polikarpov I-16 was an efficient dealer of death: “the world’s first cantilever-winged monoplane fighter with retractable landing gear,” according to Wikipedia. Man with Movie Camera probably has the power to destroy too, just like Rodchenko’s gun shapes. But the change from Rodchenko’s primary forms to Dobrovolsky’s aerobiedermeier tells us that after just one look at the poetry of machines, the commissars decided that they much preferred the comic books of the human.