As the pioneer photographer Lewis Carroll understood, when a lens approaches a reflective surface 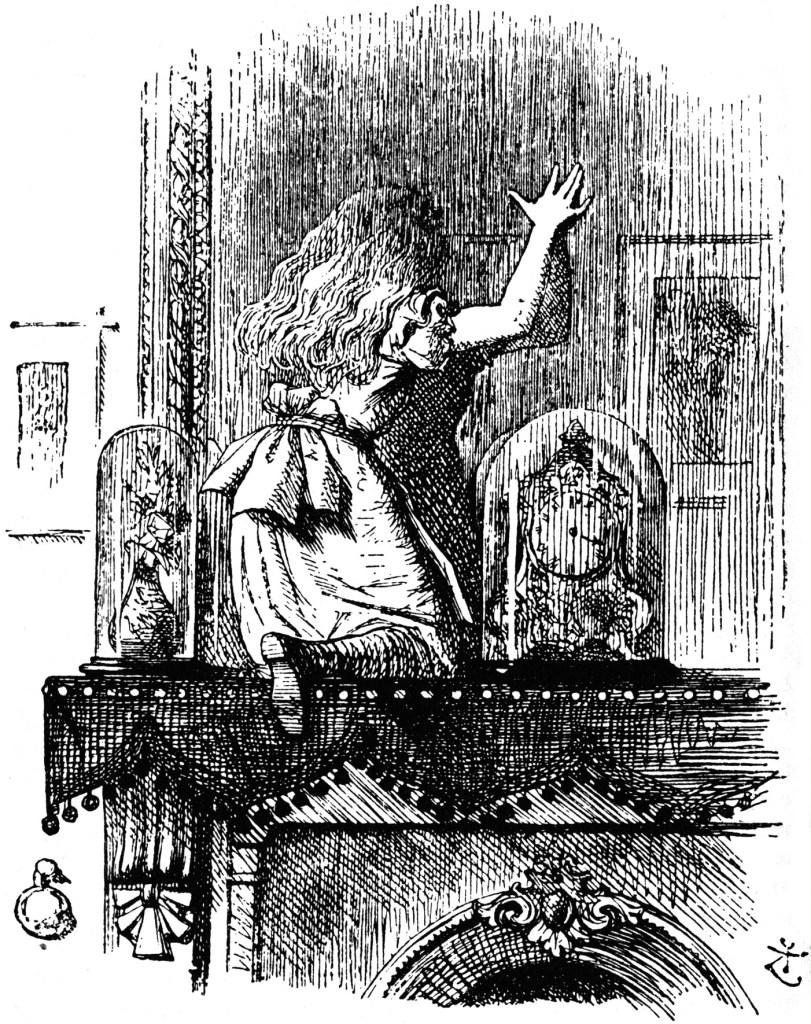 the surface can fold vision back on itself and make the act of seeing a complement to the state of being seen. Under that condition 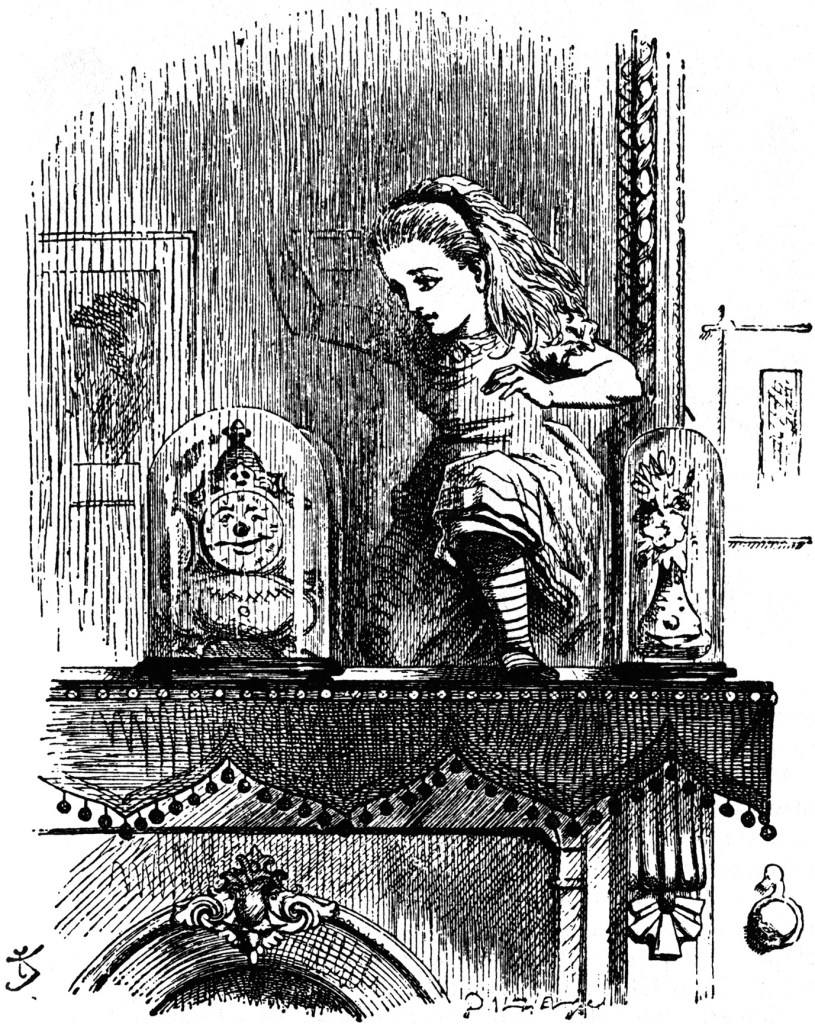 (O.S.), there may seem to be seen (for instance) an orbit filled with a globe. In that globe, let there be partially visible below its half-reflective surface an image of a camera held by a man seeing through its lens. 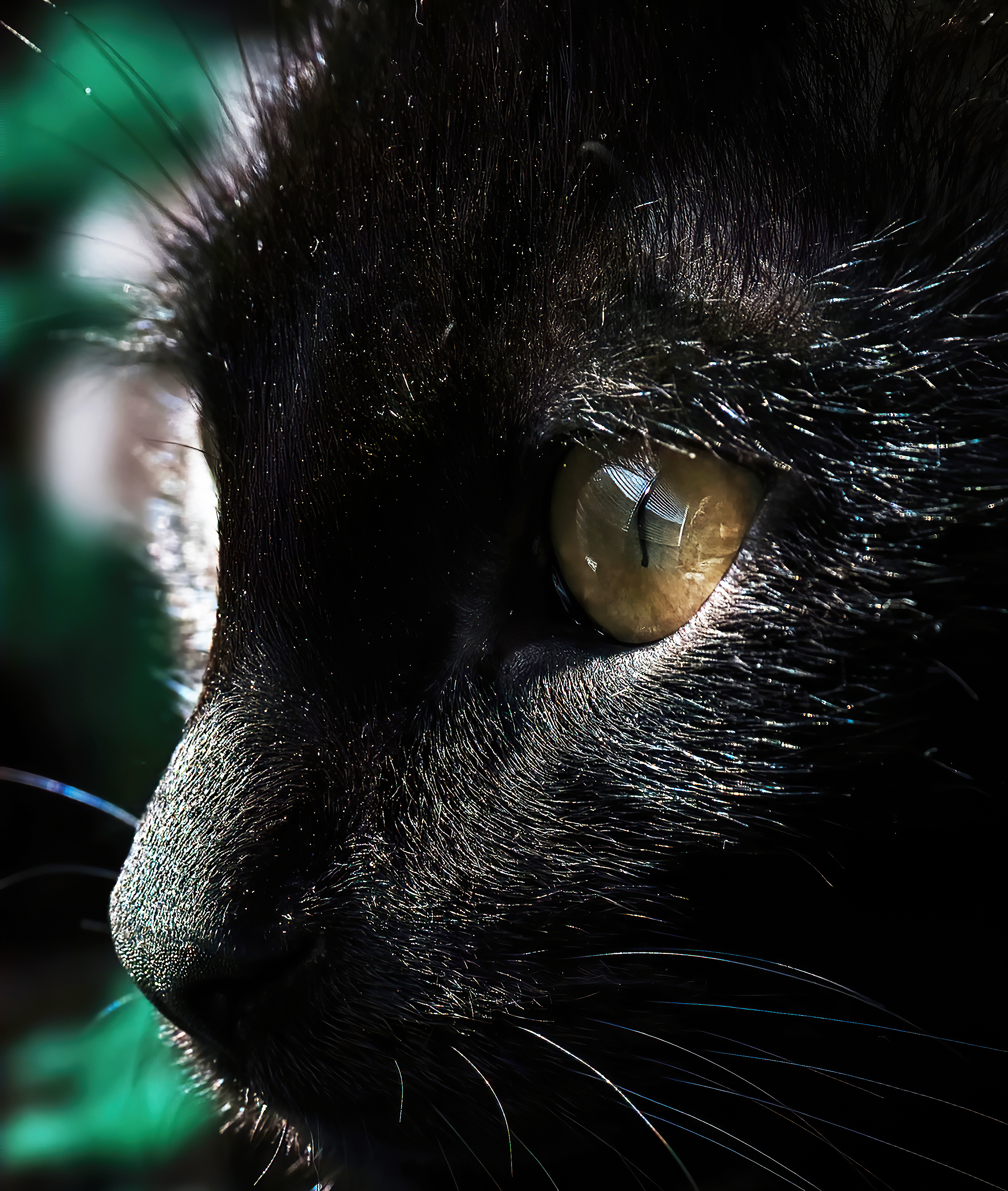 You can visualize that. “Let be be finale of seem,” says the lamplighted poem to you, calling your attention to its flashy display. But of all the elements in that display, the lens, of all things, can’t be used for seeing. As soon as it started sinking into the globe, it stopped being an apparatus to serve you and became part of globe’s image, in globe’s orbit. And there you cannot enter. You are out in the black, where the light of O.D. shines past but not into. Empirical confirmation: you couldn’t see the man in the act of his being until you had read these words instructing you what his reflection was supposed to seem to be.

The historic photograph seems to display no published provenance, and its online caption is obviously a late addition. “German fraternity mirror selfie, 1912,” say the caption’s words. There are only five of them, and they offer no more reward for reading than that. No other names inhabit the caption: names of the boys, names of their corps or their university, locations of their future battlefield graves. At that, three words of the caption’s five aren’t even interesting. Online — for instance, at

where I encountered the image on July 3, 2015 — the comment stream spawns dutiful ironies about the proximity of the phrase “German fraternity” to the date “1912,” and those you don’t have to read because you already know. Oh yes: just two years after 1912 will come 1914, and little do they know, these tragic boys in their lead-soldier uniforms. The commenters in their stream find this thought exciting, but perhaps it has previously occurred.

And whether you were among the excited or the unexcited, the idea’s bedazzling undergraduate words might almost convince you not to bother looking at the image they refer to. Nevertheless, the image still does cling to the caption’s border. Pathetically, it even tries to reach a little mirror up from the page and tempt us to look in, as if it had something to show us about ourselves. Look, it pleads; look with my help at the caption’s word no. 3 of 5, the one you’re skimmed past. In the mirror, look for an idea of mirror.

If you humor the request and do look, you’ll discover that during the instant when it made itself seen between two surfaces of a mirrored space, the camera in the picture began showing you an image and then didn’t stop. What the mirrored camera began bringing to light in 1912 is an image not only of the dead fraternity boys but of you who look at them now, you who are said to be alive. 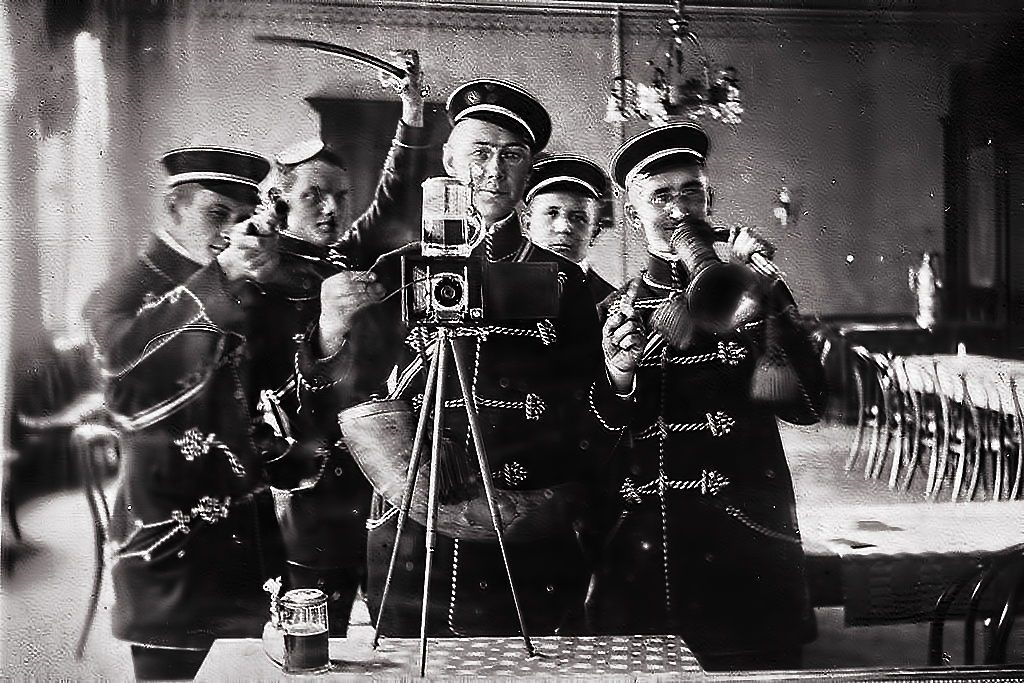 I’ve photoshopped the faded original of this image for contrast, but I haven’t reversed its mirror property. Having been made a part of the image’s settings by the boy with the camera, that wasn’t in my prerogative to change. So the boys with their historical apparatus dated 1912 — the rifle, the bugle, the drinking horn, the scar-inflicting sword — continue looking now the way Alice looked at the moment she exited from our world. The world she entered then has grown more familiar by the day since its discovery by Lewis Carroll, but the world of this photograph is now unfamiliar henceforth. Somewhere in Germany, one day in 1912, a boy with a camera sealed himself and four of his friends behind glass and pumped out the time.

Out of time behind his glass, the boy is now holding the camera’s cable release clear of the imaging apparatus. It’s a long one; he has passed its plunger button all the way behind his back from his left hand to his right, which one day in 1912 held it up to the mirror while a last instant of pre-image history was changed with a click to something else. Something else has been among us ever since. It is the other half of our mirror image: the half that does not change and will not die.

And within its glass, bounded at the front by our world and at the back by the surface that reflects us back to ourselves, is the reaction zone where the two halves of the image, the mortal and the immortal, face each other. Looking at images every day, we cross the zone hour by hour in both directions. We’re as blasé about the daily trip as commuters, and maybe that’s why we turn away from the windows and look around our transport for something to read. If we’re beyond being moved to a sense of the real by a silent image, we may still be movable to excitement by a caption shouting at us like a CNN talker with time to kill. But perhaps there is a route across the zone that lets the traveler disembark for a moment, look around, and become alive to the zone’s interesting dangers. After all, Alice once took the route, and told us how. The secret of her itinerary seems to be a simple one, at least in principle. It may be this: just stop when the signs change to transparent.