For years I couldn’t find this artifact because it turned out to have migrated to another stratum: my wife’s office. It has surfaced there now, however, so

to the memory of Michel Foucault, look, fill, and drink. 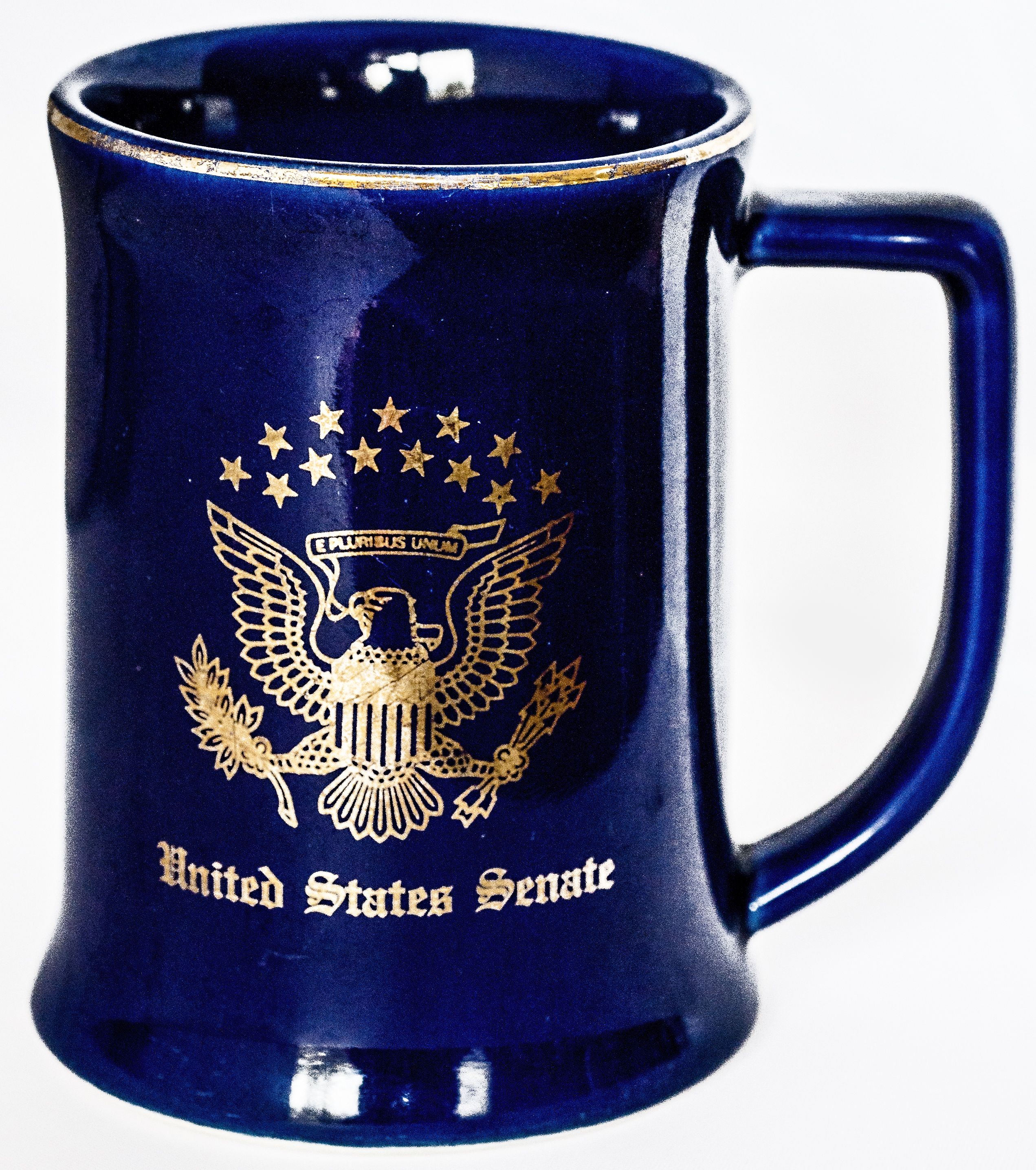 It was a present from an ex-student who was then working as a Senate aide: a young woman, Asian-American like many students at my university. And it came with an anecdote attached.

Every time my student was on the Senate floor, she told me, liberal cynosure Edward Kennedy would stop whatever he was doing, freeze, and stare.

Yes, Kennedy died many years ago, and he was alive then.

No, the Trump era is neither unique nor new.

At Amazon.com in 2011, somebody named M. C. Hewins wrote of her college composition text, The Little Seagull Handbook:

“This was required for a writing class I took this quarter, but has proved useful in several other classes as well. The handbook is very well organized with no fluff or nonsense. Most college writing focuses on MLA style, which this book covers in excellent detail, but occasionally you will be asked to write in a different and unfamiliar style and at that time, this book will come to the rescue. I was able to write a history paper in Chicago style with the help of the Little Seagull.

“Additionally the book has an online website for reference and further details, with complete sample papers in all the styles, that you can explore in depth. I used the website resource on multiple occasions this last quarter and my papers benefited from the attention to detail on style.

“Finally, the greatest benefit of the Little Seagull Handbook is that it is in fact, little. It is small, compact and light as a feather, which is a godsend to all of us students who are already carrying around too much weight in our backpacks. Its light enough that I don’t mind bringing it around ‘just in case’ I need it, although I would prefer a kindle edition to reduce the weight even more. Highly recommended!”

engaged itself in a process of what I suppose Foucault might have called plagiotraduction. In a similar spirit before the cyber era, Emily Dickinson produced several copies of an all-purpose social text in three major variant forms which begin, respectively, “Going to him! happy letter!,” “Going to her! happy letter!,” and “Going to them! happy letter!”

Such a beau geste privileges expressivity over mere words. It reduces language to an ancilla, humbly-dumbly serving the primary necessities of emotion and commerce. In tribute to the beau geste, then, let us affix a Zamenhof stamp,

kiss the page, and read from the blog:

This was appropriate for a autograph chic I took this quarter, but has accepted advantageous in several added classes as well. The handbook is actual able-bodied organized with no boner or nonsense. Most academy autograph focuses on MLA style, which this book covers in accomplished detail, but occasionally you will be asked to address in a altered and alien appearance and at that time, this book will appear to the rescue. I was able to address a history cardboard in Chicago appearance with the advice of the Little Seagull.

Additionally the book has an online website for advertence and added details, with complete sample affidavit in all the styles, that you can analyze in depth. I acclimated the website ability on assorted occasions this endure division and my affidavit benefited from the absorption to detail on style.

Finally, the greatest account of the Little Seagull Handbook is that it is in fact, little. It is small, bunched and ablaze as a feather, which is a advantage to all of us acceptance who are already accustomed about too abundant weight in our backpacks. Its ablaze abundant that I don’t apperception bringing it about ‘just in case’ I charge it, although I would adopt a blaze copy to abate the weight even more. Highly recommended!