Marked at the top of the negative with what is probably a filing date, “8/10/[19]21,” this photograph of a ship probably dates from the spring or summer after the ship entered service in November 1920. Originating in the date and immediately moving offsite to reference sources, that’s the textual history of this image. Of the rest of the image’s history, the part that remains inside black borders, little remains. We can’t even really see the forms it depicts until we’ve tagged them with guesses originating in text: the word smoke, the word gun. We will have to look right through one of the image’s blank spaces before we can locate anything capable of being understood and uttered — a name, at last! — and then write that into a literary text leading to a satisfactory The End. Probably delivering an A’s worth of irony, for instance, might be something like,

Dreadnought Nagato: to become the only Japanese battleship that survived World War II. 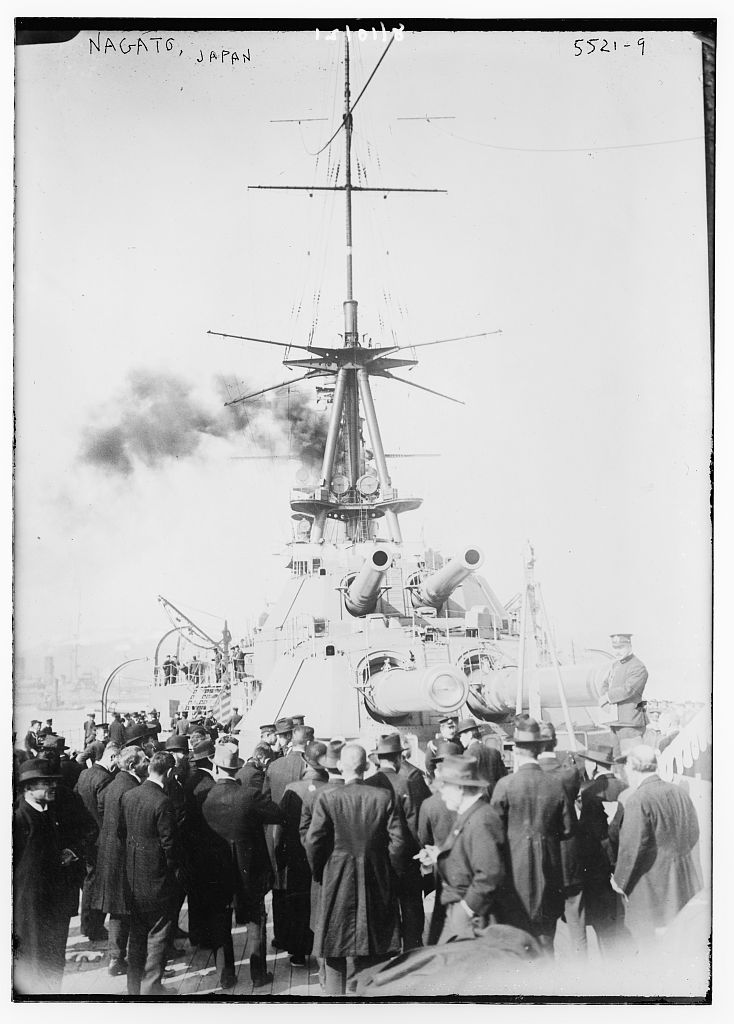 But computer technology offers us a second try at seeing within the frame. Just (it is so easy now) post-process this image with (for instance) Photoshop, bring to bear an artificial intelligence mediated by programs named Topaz Clear AI, Topaz Sharpen AI, and Topaz DeNoise AI, and within the frame there will reappear, after the lapse of a century, a man: an officer of the Imperial Japanese Navy, his eyes shadowed by the visor of his cap but his whole body communicating senses of words such as watchful and alive. The effect is almost as if the image’s photochemistry were recreating an affective intention. See, says the intention; see, in the first instance, the recovered trace of my silver halide crystals. In the second instance, they will have prepared you to love me. 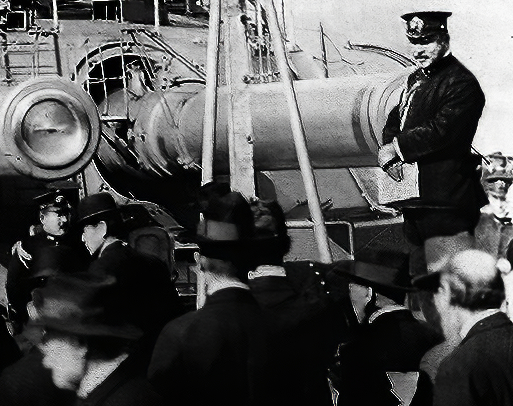 And if the love within the image is a sign of a love that existed before the image . . .

Offered for eleven euros on April 28, 2019, this is a presumably French photograph dating, to judge from the clothing and the deckle edges, from the 1950s. Its commercial history online is no more than that. The image has numerous tag-names, but the forms within it have none. They are nameless now; only shapes given temporary form in a distant past. In the recent past, somebody decided that their significance was no longer worth deciphering and carried their picture out to the flea market. 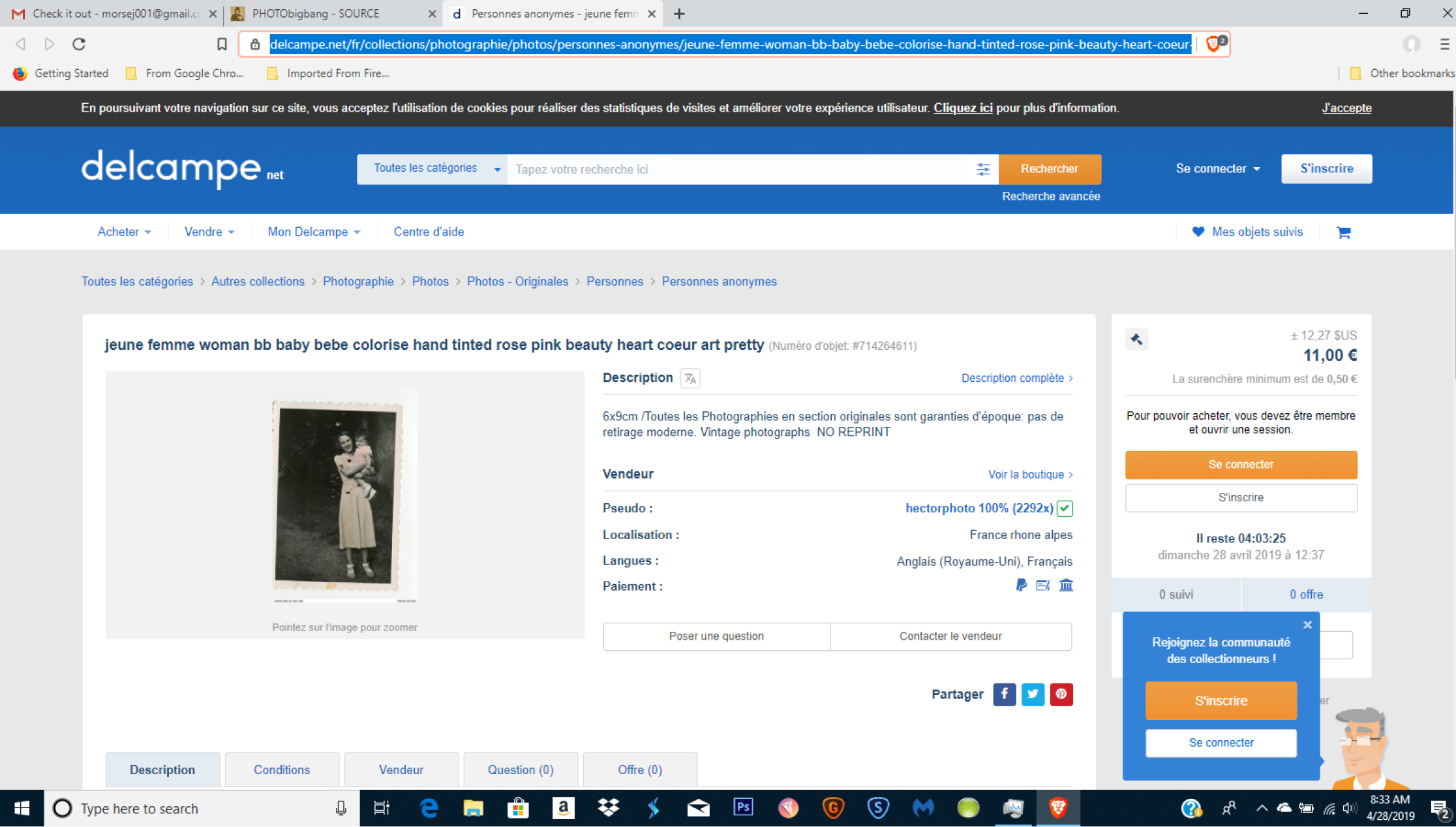 But after the image took its temporary form it was supplemented with the persistent trace of a pre-existing  desire. 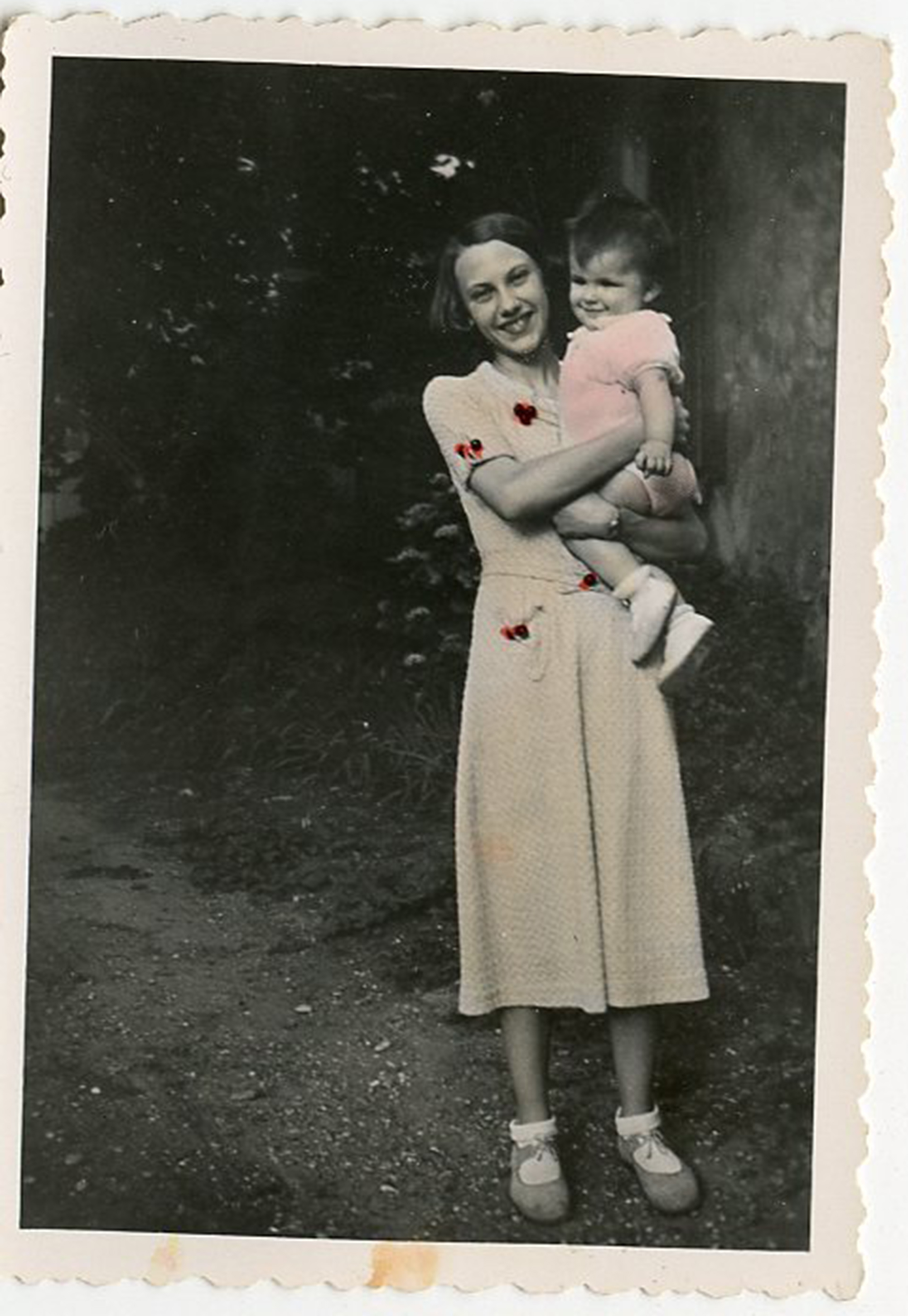 Somebody with a tube of photo-tinting pigment decided to make the little girl’s dress look pretty, so down went a layer of pink. Then the desire extended to the decorations on the young woman’s dress. She had already brushed her hair and put on lipstick, and her cherry buttons were so cute and red . . .

The photo technician was an amateur, and photographs back then had to be waited for after they were taken. The retouch job probably hadn’t been anticipated, and this print was probably the only one made at the time. That was the usual course. Mistakes, such as the excess of red on the cherries, were vulnerable to the arrow of time. Once having been made, they entered history irrevocably, without possibility of correction. Faced down by history, the amateur capped his tube and walked away, and the young woman’s face entered its posterity shrouded in monochrome.

But once, for a moment unrecorded except in the seen fact of its having occurred off the record, somebody may have smiled as he picked up a newly uncapped tube of color and moved it toward contact with a not yet touched surface communicating at the molecular level that there now existed a woman and a baby, and (off the record) they were loved.