One day the pioneer modern dancer Ruth St. Denis changed her clothes and underwent metamorphosis into an event. During the time leading up to that success, her body and her closet full of cloth had had separate histories, but now they were adorning each other in a single aspect of forever after: history itself, history large and one. Within history, Ruth had become a read chapter. Thereafter, in penciled words and photographic images, she set about compiling the chronology of her body’s triumph, and the New York Public Library’s Denishawn Collection is now custodian of the corpus. It is 949 chapters long, and this is one of the chapters cataloged in 1904 as Radha.

Because what remains of Ruth is a history of a dancing body, its meanings are a flow which changes from chapter to chapter, and reading a chapter-to-chapter translation is a matter of understanding how clothes and the body keep changing each other. See, for instance, how much this Radha clothesword has changed since the day in 1906 when it was written. 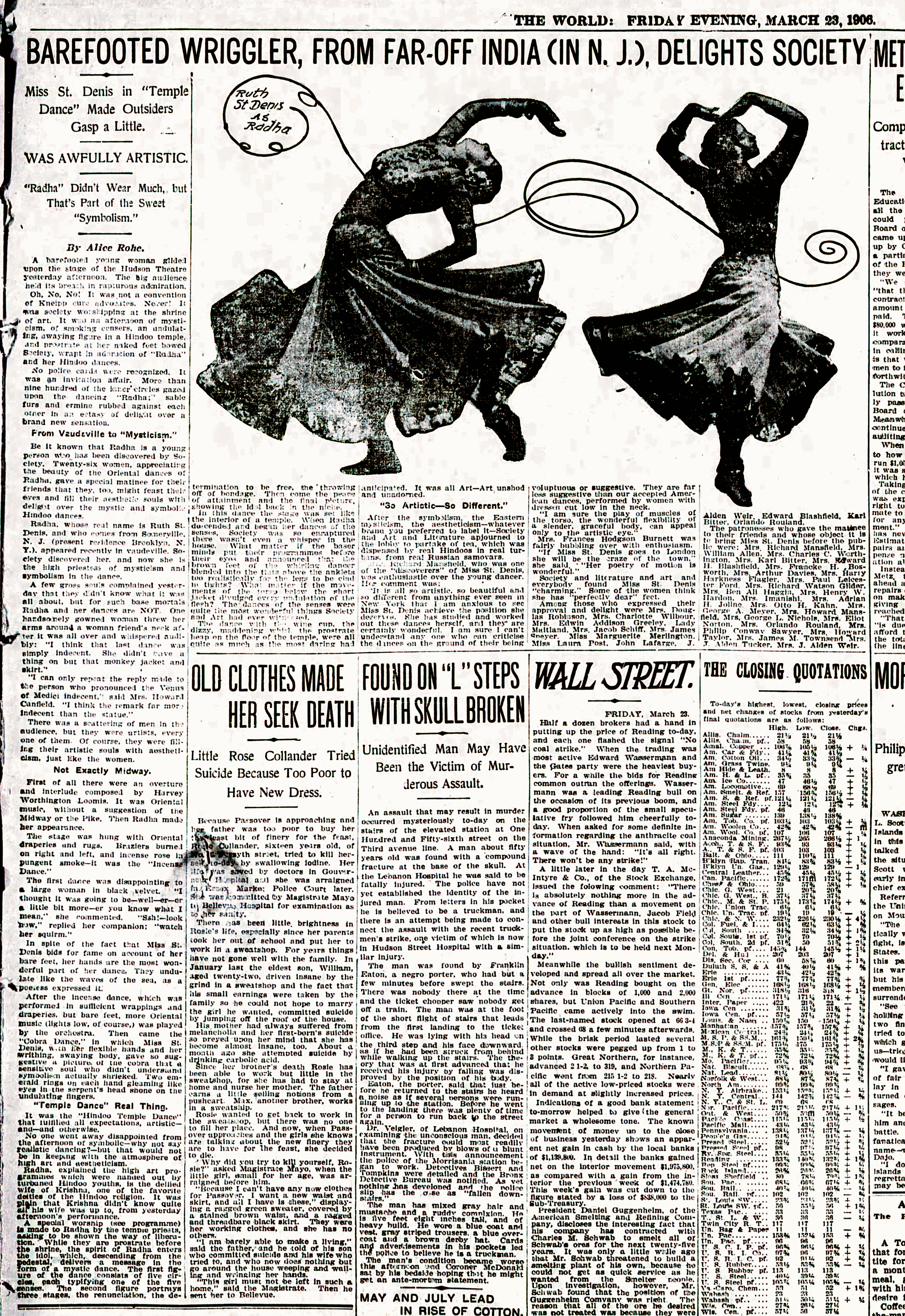 “Wriggler” wouldn’t be what we say these days — not now that ways of talking about Ruth St. Denis have been codified and made canonical. But of course no translation, no matter how contemporaneous, can ever represent complete synonymy. Even in long-skirted 1906, barefooted didn’t stand merely for the shock of flesh suddenly realized to be naked.* A rendering capable of justice to the whole of partially garbed Ruth’s swish and sway might have been better written as something like outfit. In the language of outfit, articulating itself fabric by fabric, a body expressing itself by means of cloth might be understood as saying, I change and I will change forever, always fashioning new bodies for the next clothes-hangers over. Among the technical vocabularies capable of describing such a flow of meaning in 1906, one actually was a Linnaean binomial: Awfully artistic. Utilizing that, The World’s curator of dance pinned wriggle to his page about Ruth and characterized it as a looping around the wriggler’s name.

Then somebody else turned the page, and on a different page there was revealed a scrapbook inventory, this one not pinnable down by doodle but already pasted into place. On a sheet of dark paper, some of Ruth’s body’s parts (“jeweled hands and feet”) were now exposed separately to the light which had once fused them into a single grace. On the glass of a photographic negative, Ruth had been seeable as a whole. Wholly self-explanatory to anyone with memories of his own body, she was fully comprehensible in any of body’s languages. But on paper, pasted to a substrate in the mode of a dismembered and de-completed set of positives, Ruth’s isolated hands and feet could only be read — and read only as an analytical treatise representing dissociated thought and the disintegrated self.

During the instant before change, Ruth’s body in its first costume must have filled the entirety of Ruth-space with wriggling, gem-shimmering light. But then it stilled itself within the narrow space allotted to it for a pose, passed through the camera’s lens, and became the silver halide trace of an outfit permanently smoothed down upon dark paper. Unlike body’s nonce-wriggling, however, outfit’s stillness remains on record. There in its still remainder we will be able to look up the nature of outfit, representing forever after what can no longer be seen.

On a different page, a different body remains: a body of words set down about a teenaged girl named Rose who once raised to her lips a death-bringing vial of iodine. The world’s first photographs were creations of iodine and silver bonded by light, but no light had been allotted to Rose. The rags she wore were once described but never pictured. Between the covers of Ruth’s history, the Rose chapter is read-only and in the dark. Any light that may fall upon it will have to originate from within the text, as a reflection from silvered Ruth. Like the silvery photographs in the Denishawn Collection, Rose’s image in the mind has been separated from flowing time and stilled in a single aspect. But a photograph’s stillness can be exchanged in memory for a memory image of unphotographed life moving in its flow, and Rose’s unseen stillness can’t. The instant that the Rose of unpictured text exited her courtroom, entered her mental hospital, and became an orphan of the living but also unpictured, the plot of her no longer readable story stopped moving. We’ll never know how it turned out. And Radha is only to be known dancingly.

* “What matter if the baser minds put their programmes before their eyes and announced that the brown feet of the whirling dancer blended into the tints above the anklets too realistically for the legs to be clad in tights? What matter if the movements of the torso below the short jacket divulged every undulation of the flesh?”