History says: in the summer of 1901, the international Great Lakes yacht race for the Canada’s Cup took place in waters off Chicago. For Canada, the Royal Canadian Yacht Club’s Invader, commanded by Aemilius Jarvis, defeated the Chicago Yacht Club’s Cadillac of Detroit, commanded by W. M. Hale Thompson. On behalf of history, reporters on the scene at the time jotted down some raw data, such as

Also in history’s service at the time were some photographers, recording images. In 2015, Photoshop and I tried to make one of the images visible to 21st-century eyes, with this result at https://jonathanmorse.blog/2015/05/26/estampe-xvi-blemish/.

There it probably is, in the distance at the right: either Cadillac of Detroit or Invader, subject and occasion of the document. It and Morrill and Pathfinder are long gone now, of course. Only the document survives. But in it there also survives, literally as a fossil in a glass negative’s photosensitive coating, a fingerprint: the fingerprint of somebody living as of 1901. 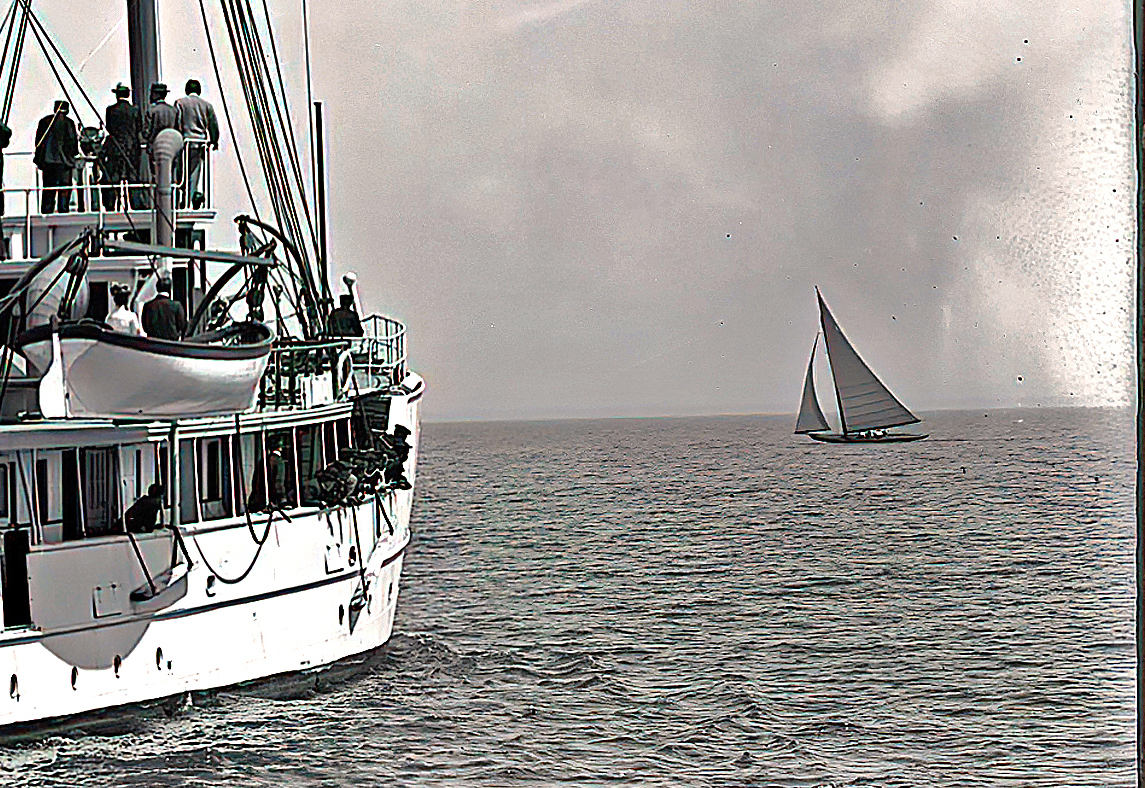 I zoom back out: to full size but also to the Photoshop of 2021, restless and unchanging as if alive. At full size, the fossil is barely noticeable now, barely historical any longer. But in lieu of its trace, see what else in the fossil bed has been brought back up to light.

The name on Morrill’s counter is decipherable now, and the stars in the flag are visible to the naked eye. As to the men (and the one woman) who are watching the sails and waves from onboard, the illusion is that they appear living and breathing again, rising and falling waveborne in Morrill’s body. Reading the word Morrill below them, we seem to have been carried back in time to a text’s present tense. Furthermore, the whole image’s upper left and lower right corners were destroyed some time post-1901, but Photoshop and I have now replaced them with convincing 2021 fictions written in a computer language named artificial intelligence.

In 2015 I wrote a blogpost about 2015’s image and 1901’s fingerprint. In 2021, my language, my intelligence, and my body’s fingerprints may be in need of prosthetic artifice. The technology has been created for us, whether we wanted it or not.