This image comes from a blog titled “Everyday life in the past: a collection of primarily found photos featuring everyday people and life from eras bygone.” 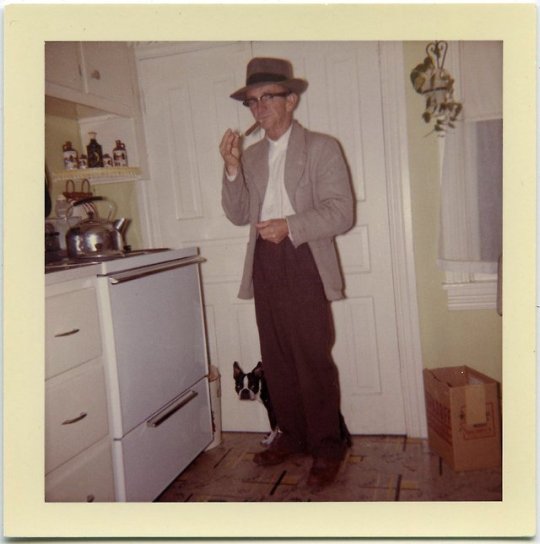 To judge from the kitchen appliances and the man’s clothing (notably his cowboy boots), the image appears to be American. The medium-wide hat brim probably tells us that these American features were on display in the mid-1950s, and the picture’s square format, low camera angle, and low resolution probably mean it was taken with one of the inexpensive twin-lens reflexes that were popular at the time.

And now the image is faded and discolored. When the image went online, that chemical change had a literary effect: it encouraged the blog’s editor to go elegiac and write the word era. Era is a region of time experienced exclusively in retrospect. The moment when everyday life enters into a category and becomes knowable in whole as an era, it ceases to change. “Everyday life,” the era, is no longer life as such. It has gone historical.

To see how the loss of change has affected the image, we need only to consider it in waxwork mode, as a model of what was once living. In collaboration, you and I can easily create one of those simulacra. If you, reader, contribute a cry of Eheu fugaces and I contribute some labor in Photoshop, this is one of the things that can happen. 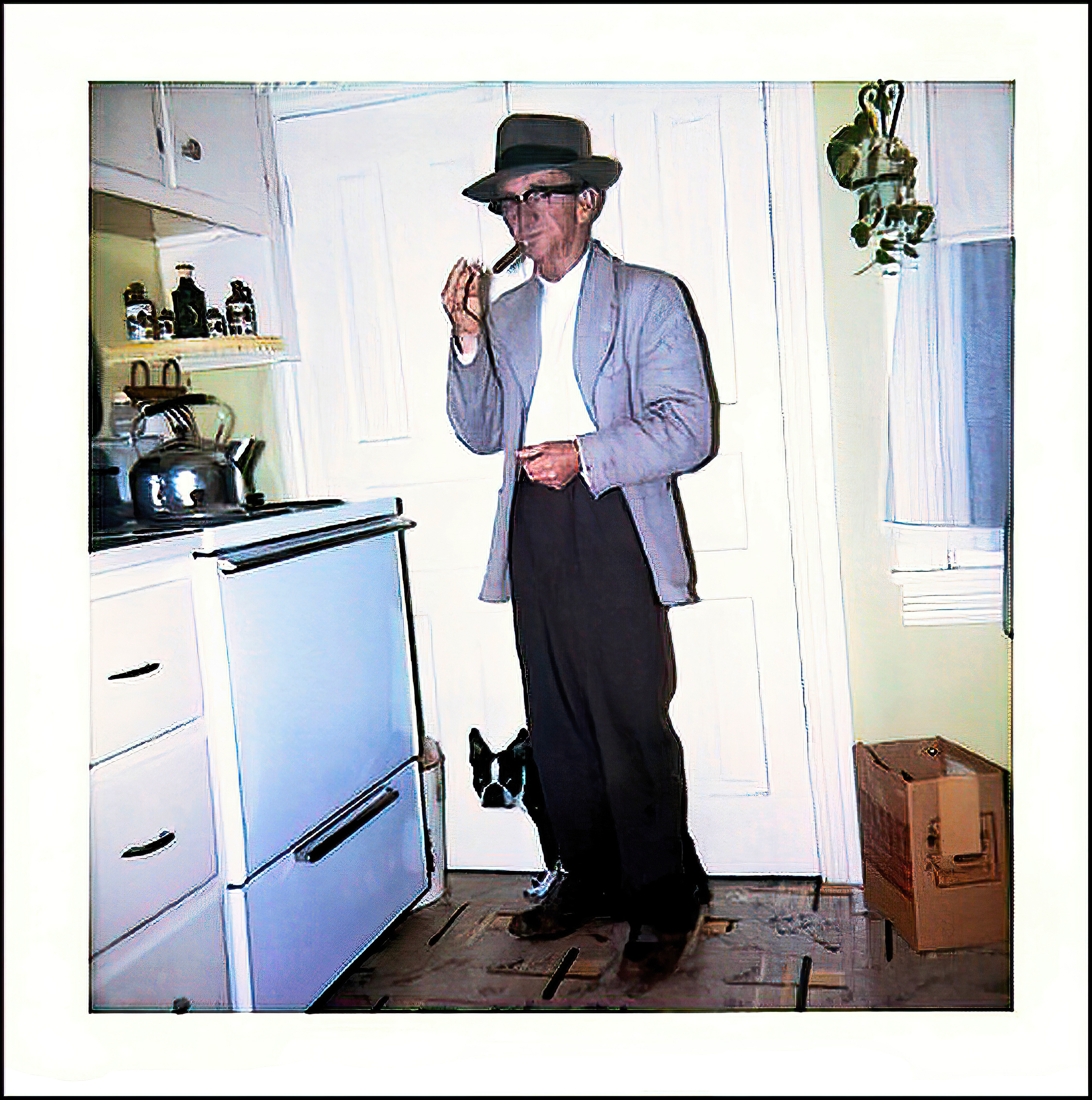 Examined through a magnifying glass, this finished product will open itself a little and reveal latencies: image fragments that resemble traces of life. Seen again after who knows how long, for instance, is a hearing aid built into the man’s glasses. In the photographer’s teakettle, too, I may even be seeing the photographer herself, silhouetted in reflection. At some time in about 1955, a shutter in a camera in her hands actually did click, a flashbulb made a popping sound and emitted a smell of melting plastic, and certain aspects of a Boston terrier, an old man in a hat, and a cardboard box entered in combination into an image. The sequence of mechanical actions eventuated in a small multicolored square that seemed, at the time, to be a tranche of life.

But then, as Emily Dickinson said of the carte de visite photographs that were exchanged among friends in her time, the quick wore off. Most photographs are not looked at, for their actual image content, but looked through as if they were windows opening onto a view of memory — and after history lost its record of the man’s name it lost his memory too. Nothing was left of him then but an image. Perhaps that was archived for a while among other images of the home with its dog and its reflected photographer, but after a certain number of funerals (the evidence of its presence in an online flea market proves it) it was disposed of. The blog’s name for its content, “eras bygone,” with its antiquarian inversion of the order of noun and adjective, isn’t the language of history; it’s the language of death. The blogger and I can’t walk through the flea market of images and expect to hear words there, explaining. The market is not an archive but a catacomb. The faces in their niches may be tagged with names, but no one ever again will be able to speak their dead language.

But the physical aspect of image still does communicate. We can still see, as eras bygone saw, that the man in this image is lighting a cigar. The flame in his hand is as ever what it was in 1955. It always will retain the invariant property of giving light. And (says the image, without saying it in words) once upon a time, for a fraction of a second, a flashgun mounted on the side of an upward-aimed camera burst into a light of its own and threw the flame into shadow. That momentary change from light to darkness achieved something historical: an alteration in the usual behavior of the world; an event.

And that we don’t see through but see. Whatever wordy record once belonged to the man is gone from the tranche, but something in the tranche itself still evokes odors of flashbulb and cooking and dog and cigar. It is the sense record of the event, inscribed by a chemical process on whatever it is along the pathways of our nerves that goes by the names of memory, and the remembered or imagined past, and love.

For “Everyday Life in the Past,” http://fifties-sixties-everyday-life.tumblr.com/

For the Kodak advertisement, http://www.brownie-camera.com/posters/pages/091_1960.shtml

For the Emily Dickinson phrase: The Letters of Emily Dickinson, ed. Thomas H. Johnson and Theodora Ward (Harvard University Press, 1958), letter 268, to Thomas Wentworth Higginson, July 1862. Declining Higginson’s request for a photograph of herself, Dickinson explains: “It often alarms Father — He says Death might occur, and he has Molds of all the rest — but has no Mold of me, but I noticed the Quick wore off those things, in a few days, and forestall the dishonor — You will think no caprice of me — ”