Transliterated into German, the caption within this image reads, Er versorgt sie mit allem — “He provides them with everything.” The verb versorgt communicates connotations of cares and cares for, and the recipients of the gifts and the care, they, would be Jews fighting for America in the Great War. But the key transactional word in the sentence is alles. Within the image frame alles defines visual allness metonymically, piling example upon example. When you began wearing a uniform like mine, say the provider’s Jewish body language and Yiddish words, you lost some memory of what you are. But your words are still understood, have been understood all along. And now I bring you a cargo of word-things that will make your memory whole again. 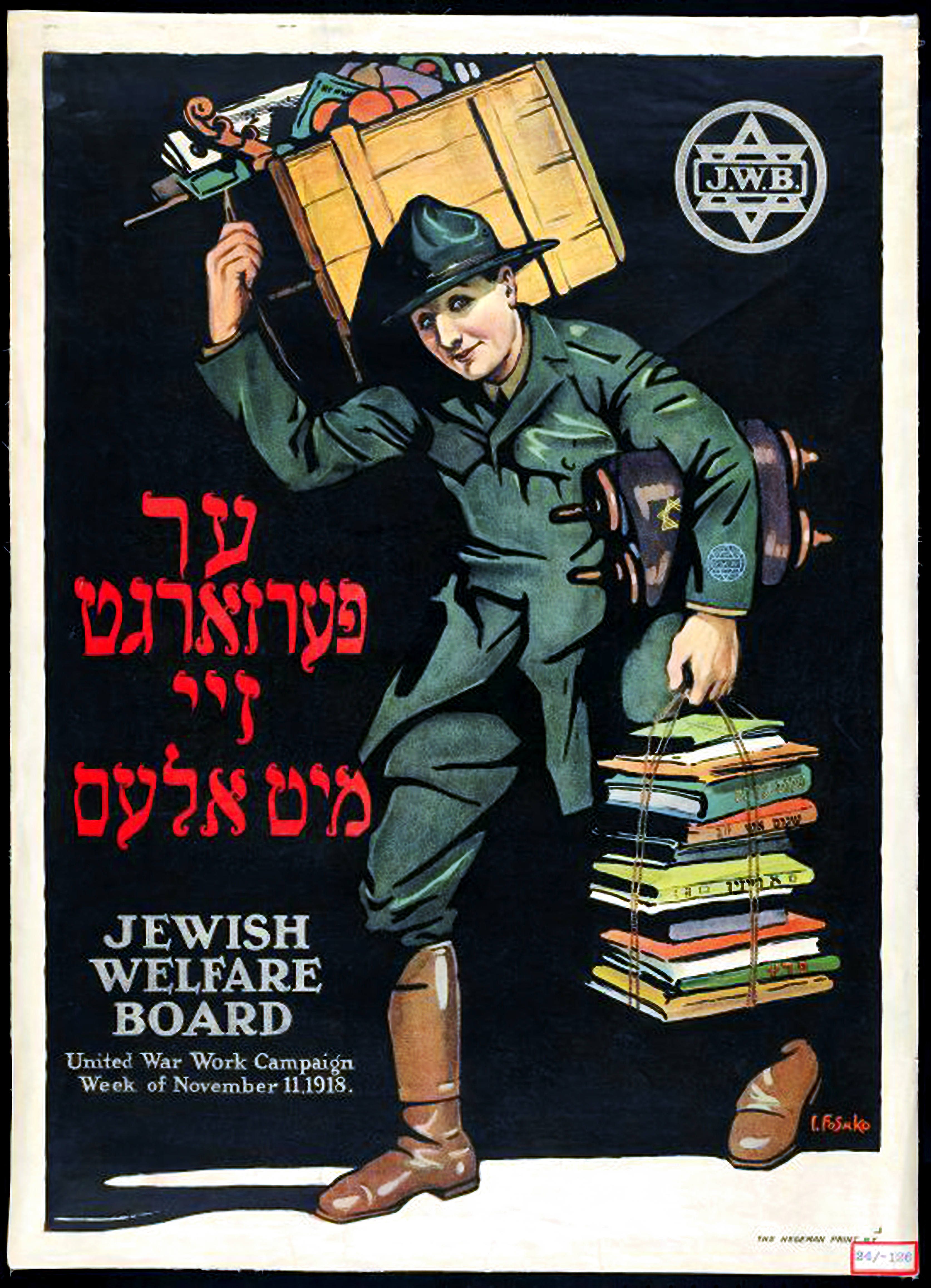 Rolled up in its mantle and held tight and alone under the provider’s left arm is the primary thing: a Sefer Torah, the unabridged text of the definition of Jew. But just below it, dangling from the provider’s left hand, is a string-wrapped bundle of other texts cheerfully inviting untying. These are books to be read on the six other days of the Jewish week. Their language is not Hebrew, the language of the synagogue, but Yiddish, the language of the home, and the authors’ names on their spines — Sholem Aleichem, Sholem Asch, I. L. Peretz — are contemporaneous with the clean-shaven, secular young Jew who is cheerfully hefting their supplementary weight. One more of the authors on the spines, a reminder that as of the date of this composition Yiddish was the living language of heym for the great majority of American Jews, is the now all but forgotten Avrom Reisen, who wrote a short story a week, year after year, for the Forverts. Then here before your eyes, say imaged names like Reisen’s, is what we mean when we say alles. To be comprehended, the words of All’s language require only to be read once again as they were read in your home the day you put on your uniform and left. They are still there, waiting only for you to return and speak them once more. Through the coming years of silence, they will not change. They will always be there to be understood and to understand you. The moment you reopen their books, they will rise from their pages and meet you. You will not have been forgotten.

And carried into the image frame on the welfare man’s right shoulder comes still more. For Jews to read there is a newspaper, presumably a Yiddish one. There are some round orange things which I’d guess may be dried fruit — comforting to have on hand when the meat in the mess hall is tref, and carrying connotations as well of Jewish tenderheartedness and Jewish mother love. And there is — oi, yes! — a violin.

Well, fund appeals during America’s participation in the Great War were coordinated across many cultural dialects. The blog cited below includes reproductions of posters in Polish and Chinese, not to mention one in English that demands, “Are you 100% American? Prove it!” The poster we’ve been looking at is a product of that coordinated effort: not a work of art but a work of war art. It is intended to evoke only clear and unmixed feelings. The emotional provisions that it delivers have been massed in the image frame only for the straightforward purpose of increasing military efficiency by strengthening morale. So it isn’t necessary to play that Jewish violin in a high theoretical register with a word like metonymy. Stereotype will work just as well.

But we want the Jew to play his violin, don’t we?

If we do, since we do, let’s thank our brown-booted provider for his welfare. Whatever the military intent of the Jewish Welfare Board may have been, a violin can at least remind us that the they in their image won’t always be in uniform. And the date preprinted on the poster happens to be Armistice Day.

Source: I first saw this poster by Josef Foshko on X-Ray Delta One, James Vaughan’s Flickr blog of old commercial images. But for the image that I photoshopped I went back to Vaughan’s source in the Museum of the City of New York, as reproduced in the exhibition blog “Posters and Patriotism: Selling World War I in New York,” https://blog.mcny.org/2017/04/04/posters-and-patriotism-selling-world-war-i-in-new-york/