The photograph in the New York Public Library no longer gives up much to the eye. It has faded year by year for almost a century now, and most of its remaining significance has been transferred for preservation to a catalog text housed in a database. 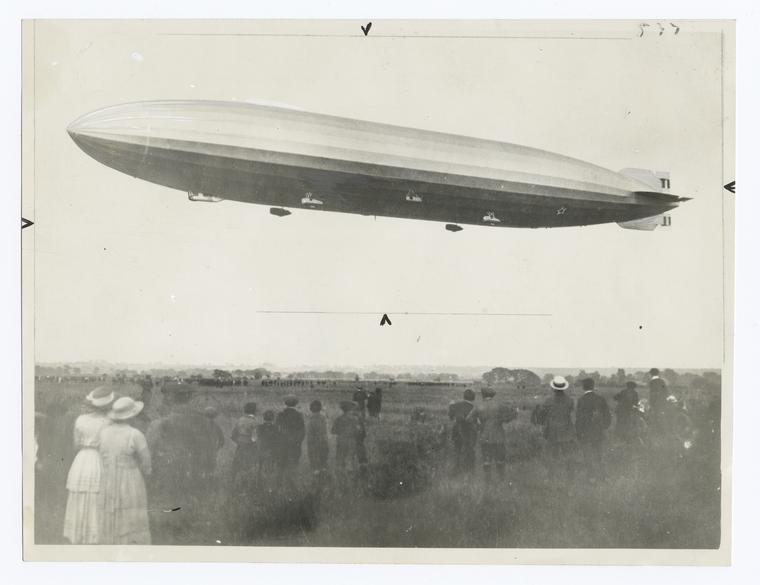 There, offsite, words written about this gray blur say that it represents the maiden flight of the British dirigible R38 on June 23, 1921. Exactly two months after that date (the words go on to say), R38 broke in half in the air while making a turn and exploded, killing 44 of the 49 men on board. This was the first of the twentieth century’s great zeppelin disasters. It occurred over the city of Hull, and it must have been witnessed by thousands. But this photograph can’t intimate that, because it represents a moment before a history began. It is a picture of something not yet written into the record and decreed to be a significance accorded priority over other significances. To see it as a picture, in pictorial terms of light and volume, is to experience it pre-historically: as a perception antedating knowledge.

On June 23, 1921, the knowledge of R38 hadn’t yet been brought under the rule of retrospect. On that date, someone in the epistemological space allotted to perception saw only a floating body in the pictorial act of being huge and beautiful and took a camera to it. After that, someone with words took a grease pencil to the photograph of the huge and beautiful and made a decision about what portion of it should remain on the page and be designated “historical record.” The historical record, it turned out, was reserved solely for the portion of the image devoted to the light and air that clothed the moment of huge and beautiful. Its portion of the negative appears to have been retouched accordingly to sharpen its outline and make it clear on behalf of the historical record. Nobody bothered to retouch the zone marked by the grease pencil for exclusion from that record.

There, there were to be seen only two women wearing the not yet short skirts of the early 1920s. With them all along in that part of the image, however, has been a dark smudge on the grass which conceivably could be a historical trace of R38’s shadow. Considering how few shadows destiny allotted to R38, that might now be worth at least a sentimental thought from history. However, the prehistoric grease pencil didn’t select for of the dark. Exterior to R38’s demarcating rectangle, the dark remains only in the erasure zone. There, excluded from the part of the image that will be written up in the language called history, it evokes only questions that the words of the historical record aren’t usually marshaled to answer. (How did the air of June 23, 1921, feel in the moment when a moving, cooling shadow passed through it?) By demarcating R38 from the rest of its image field, the grease pencil defined a distinction between significance and insignificance. It was a fiat: the enforceable distinction between what should remain to be seen and what should remain to be unseen.

But this particular photograph, marked for cutting but not cut, hasn’t yet been brought under rule. Still present in their margin despite the fiat against them, two women in hats and skirts have kept looking toward a part of the sky from which the history of huge and beautiful hasn’t yet barred their gaze. Bound for the record book, the fading image cut off within its rectangle proceeds toward unfading immortality under the power of words. Meanwhile, outside the rectangle, a possible shadow has been cut free from history to play on the grass. I subject it and the women and R38, up there in its air, to the optical control of Photoshop and Topaz AI Clear.

Those technologies won’t make the women’s faces visible, of course. Ever after, the women will be turned away from you even as they look up at the purring silver history passing by up there. Of course, too, they aren’t looking down at the possible shadow before them. They too are prehistoric. But something dark is close to them, and now, for the first time in at least your own history, you are seeing. 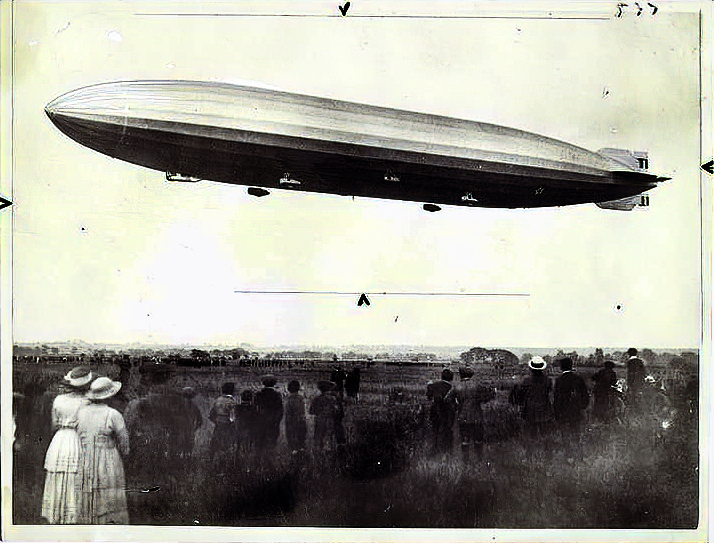