Year by year during the second and third quarters of the nineteenth century, organic chemists fashioned transformations upon the unassuming body of a smelly liquid called aniline. Under their godmothering guidance, aniline submitted to change after brilliant change from her transparent pale yellow to a whole wardrobe of dyes, color after lovable color. Every season Cinderella would re-emerge from the laboratory to be seen anew, and the chemistry of progress made sure that she was seen with ever more excitement as the century went on.

So when the long nineteenth century ended with excitement in 1914, the Russian artist I. D. Sytin was equipped to showcase the change. For effects of the lurid he had tube after tube of bright new primary colors, but for ironic contrast he also had something delicate. Sytin’s lithograph “War in the Air,” its flame yellows and flame reds set off by midnight blue, is printed on paper tinted pink. 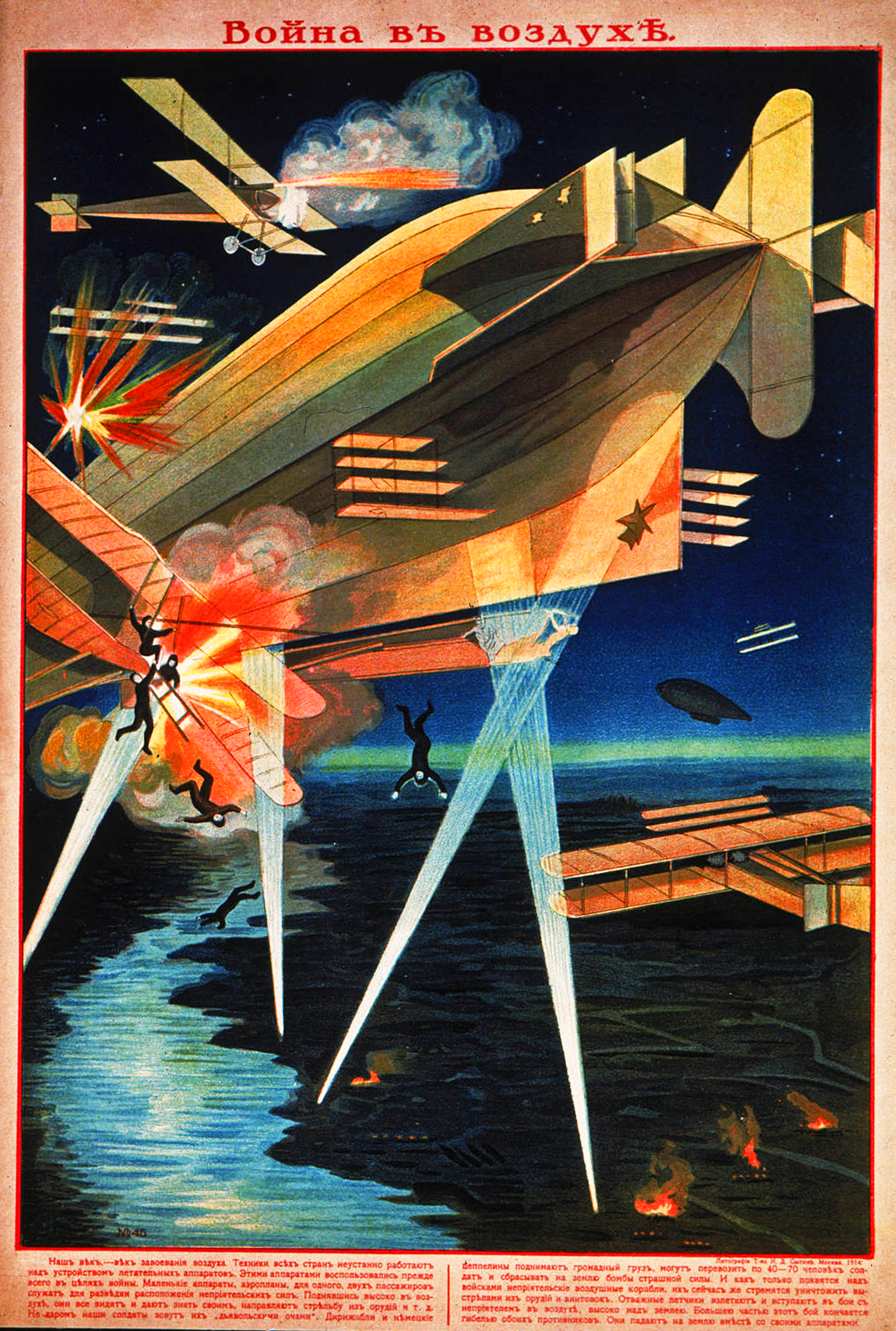 Thanks to the pink, the whole lithograph, in both its primary image and its explanatory text, has a ground of rosy conflagration-color. That doesn’t just make the flames in the figure seem to burn hotter; it also desaturates the no longer bright blue of the river shining innocently under starlight and consolidates the fine-print nuances of the text into a single hysterical scream in rubric red. The catalog of the Hoover Institution Poster Collection stubbornly insists that the two elements unified by pink within the image frame are still separate, and it formats its insistence as an equivalent pair of sentences in archival black-and-white: “Painting depicts aerial battle with airplanes and airships. Text underneath describes modern aerial warfare.” But what Sytin’s stones impressed on his picture wasn’t a separable pair of stimulants to sense-impression; it was an ensemble. In its presence a century later, the excitement we have been roused to isn’t archival, it’s historical.

Perhaps the distinction is that the historical sense at least hints at an idea of ensemble: a single consciousness sharable between a record and its reader. A historical record, perhaps, is a text that can be experienced as immediately as the color pink. At any rate, in the presence of this particular array of colors, the historical sense may remind us that it and we now subsist in a world no longer conceivable in black and white. Three quarters of a century before I. D. Sytin set to work, chemists began excitedly coloring in the world’s blank spaces, and it is no longer possible to see what the world was like before that moment. By 1914, says a Russian chronology written in aniline pink, the synthesized product was even filling in the sky.