Leg over the arm of the chair. Right index finger pointing pedagogically upward; left hand absentmindedly patting a fuzzy dog on the floor beside the chair. Hush Puppies, baggy socks, pants all the way to the armpits.

The photographer was Karsh of Ottawa, portraitist of the celebrated and powerful. His subject was Robert Frost as he had come to appear in 1958, forty-five years after he wrote to a friend: “To be perfectly frank with you I am one of the most notable craftsmen of my time. That will transpire presently.” Presently there would transpire poems such as “Acquainted with the Night,” a sonnet in terza rima describing a journey through a diminished hell which has lost all of its grandeur but none of its pain. We know now that Frost wrote it after an anguished solitary night on the streets of Ann Arbor. But Frost also had a day job as sage, and hence the pose for Karsh. As of 1958, the mood in Frost’s America was still postwar-amnesiac and the revenue word was “cute.” Five years earlier, Life had published a photo-essay by Esther Bubley which depicted Marianne Moore playing with a baseball bat and posing with the animals in a zoo. There was money in such poses, and a history involving the twentieth century and the desire not to see it while it was horribly happening.

But on March 26, 1959, Lionel Trilling disrupted Frost’s escape drill in a way that was uncute to the point of scandal. In the poet’s presence during a celebration of his eighty-fifth birthday, Trilling asked Ralph Waldo Emerson to get up from his seat next to the guest of honor and trade places with D. H. Lawrence. The move put Frost in danger, and Trilling explained his order in a way that was dangerous likewise. Looking away from Frost to Frost’s shocked supporters, he said:

I conceive that Robert Frost is doing in his poems what Lawrence says the great writers of the classic American tradition did. That enterprise of theirs was of an ultimate radicalism. It consisted, Lawrence says, of two things: a disintegration and sloughing off of the old consciousness, by which Lawrence means the old European consciousness, and the forming of a new consciousness underneath.

So radical a work, I need scarcely say, is not carried out by reassurance, nor by the affirmation of old virtues and pieties. It is carried out by the representation of the terrible actualities of life in a new way. I think of Robert Frost as a terrifying poet. Call him, if it makes things any easier, a tragic poet, but it might be useful every now and then to come out from under the shelter of that literary word. The universe that he conceives is a terrifying universe. (461)

Trilling didn’t immediately publish his speech, but during the Cold War all it took to call down cultural trouble was a rumor of un-Grandma Moses activity in New England. For writing about Frost as if his first name were Robert and not Grandma, Trilling was brought to the attention of J. Donald Adams, an authority who held forth every Sunday from a column on page 2 of The New York Times Book Review. On April 12, Adams, having requested and received a copy of Trilling’s speech, stood upright atop his column and bellowed with menacing cuteness: 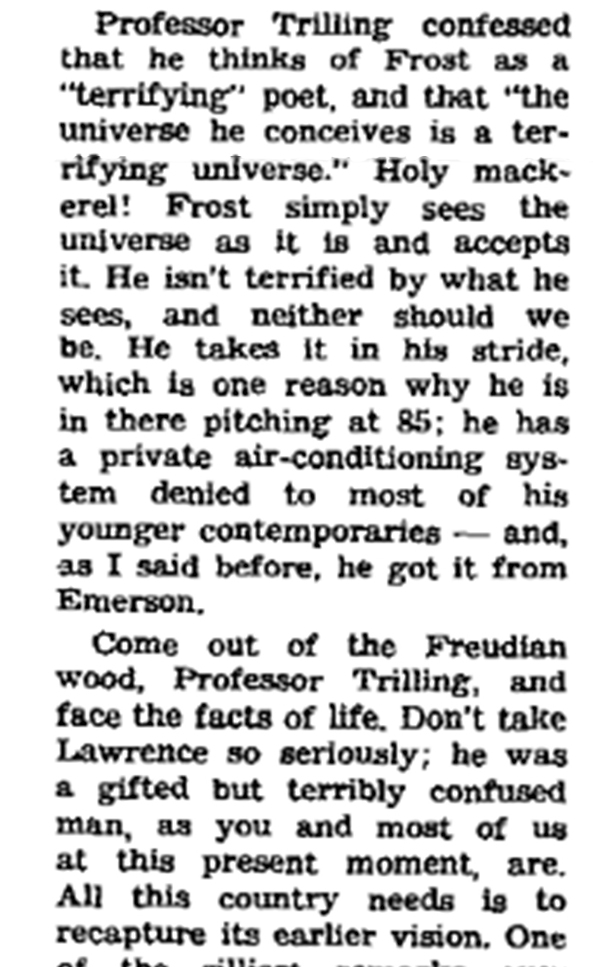 The response to this fish call, as Trilling bitterly noted when he finally did publish his speech, was unpleasant: nine thuggish letters to the editor of the Times Book Review published three weeks later. One T. M. Guerin Jr., of Troy, New York, wrote (and this is his letter in its entirety): “I hope Robert Frost was having a nice plate of buckwheat cakes and Vermont maple syrup as he read Mr. Adams’ remarks. He couldn’t have done better unless he had taken the so-called professor out to the woodshed.” Another of the nine letters was itself written by a professor. As Lionel Trilling would have read it on May 3, 1959, it looked like this. The writer of this letter, Emery Neff, was the biographer of Edwin Arlington Robinson. Before he retired in 1955, he had taught comparative literature at Columbia for 38 years. There, he might have delivered the warnings of Trilling’s ignorance of the United States in person, for he had been Trilling’s dissertation director. On the other hand, he did seem to have had some trouble acknowledging Trilling’s existence. As Trilling bitterly put it,

I have always thought of Mr. Neff as the teacher from whom I had learned the methods and attitudes of the scholar; that he should so far have abrogated the rule and spirit of scholarship as to write in support of Mr. Adams’ rebuke (as he chose to call it) without having seen the text of what I had said disturbed me deeply in a way I shall not now attempt to describe.

I have no doubt that the episode will yield cultural conclusions to whoever wants to draw them. (447)

And oh yes, one cultural conclusion is immediately obvious from the social history of this small event. According to Diana Trilling, Neff once dropped by the Trillings’ house to deliver a different but related warning: “Now that Lionel was a member of the department, [Neff] hoped he would not use it as a wedge to open the English department to more Jews. . . . Lionel and I just sat and stared. Neither of us spoke” (Freedman 195). Oh yes, again: here on page 447 of the Partisan Review for summer 1959, Trilling’s retreat from the danger of description is a reenactment of that earlier silence. It is a silence which reverberates in the conceptual space around Neff’s literally unspeakable proposition that it isn’t necessary to read a text written by a Jew before writing about it. In 1959, after all, it would have seemed impossible for a Neff even to try to understand the language of a Jew. The attempt would have seemed pointless, because the fundamental J-word at the heart of the Neff idiom is not to be understood and therefore not, among ladies and gentlemen, to be spoken. Of course you can always employ the Heideggerian third person to say, as a “peace activist” from my town says now, “Key, uh, Jewish, uh, persons with lots of money” — but can you translate that euphemism back into a meaning?

As a test of the grammar of culture, that question answers itself, unfortunately. But if you’d prefer to regard the story of Frost and Trilling not as a failure of language but as the construction of an alternative to language, you could translate it from social history to the history of photography, this way.

One day in 1958, Robert Frost threw his leg over the arm of a chair for Yousuf Karsh and began once again to perform a routine he had performed many times over the previous 45 years: the Robert Frost routine, the wise & kindly farmer-poet routine, the routine that had brought forth and would continue to bring forth harvest after harvest of royalty checks. But in 1959 it also brought forth the birthday surprise of a demand for satisfaction from city boy Lionel Trilling. When the moment came, Trilling’s words of challenge filed onto the field of contention. Against Karsh’s image of a poet in the act of articulation without words, however, they didn’t stand a chance. Karsh’s wordless Frost is all over the web to this day, and alive in a way that the memory of prolix Lionel Trilling isn’t. You do remember your Karsh dream of Robert Frost, poet, plodding with a plowman gait through your consciousness. Even as an unspeaking evocation, it is alive and powerful and cute. To Emery Neff Frost mattered because he wasn’t a Jew, but to Yousuf Karsh he mattered because he was an interestingly lumpy shape in Hush Puppies. And it’s Karsh’s affirmatively silent body, not Neff’s corpus of wordy negations, that seems still interesting.

Of course Trilling may also seem interesting still, at least in comparison with J. Donald Adams. Likewise, Trilling’s thesis about the terrors of Frost has become fully established in the schoolroom canon, to the extent that poetry is still read. But in the face of Karsh’s embodied evocation of Frost, Trilling’s word “terrifying” is faint and indistinct. Like J. Donald Adams’s abstraction “holy,” it alludes to an emotion that once evoked physical symptoms but is now a mere concept.

But see how easy it is to understand “holy’s” related concept-word “grace” when it’s forced into the mind by the muscular propulsion of a body! In its tin tabernacle decorated with a graven image, that mackerel may be holy after all.