In its online record from the Library of Congress, the original stereo pair at http://www.loc.gov/pictures/item/cwp2003004989/PP/ isn’t very satisfactory as a record in three dimensions. Its two images are differently sized, and they seem to have been taken from too far apart. Worse: most of the history they’re meant to record is in a caption in the margin, and there it communicates little until it’s been augmented by more captioning.

Here’s a mediocre anaglyph of the uncaptioned pair. 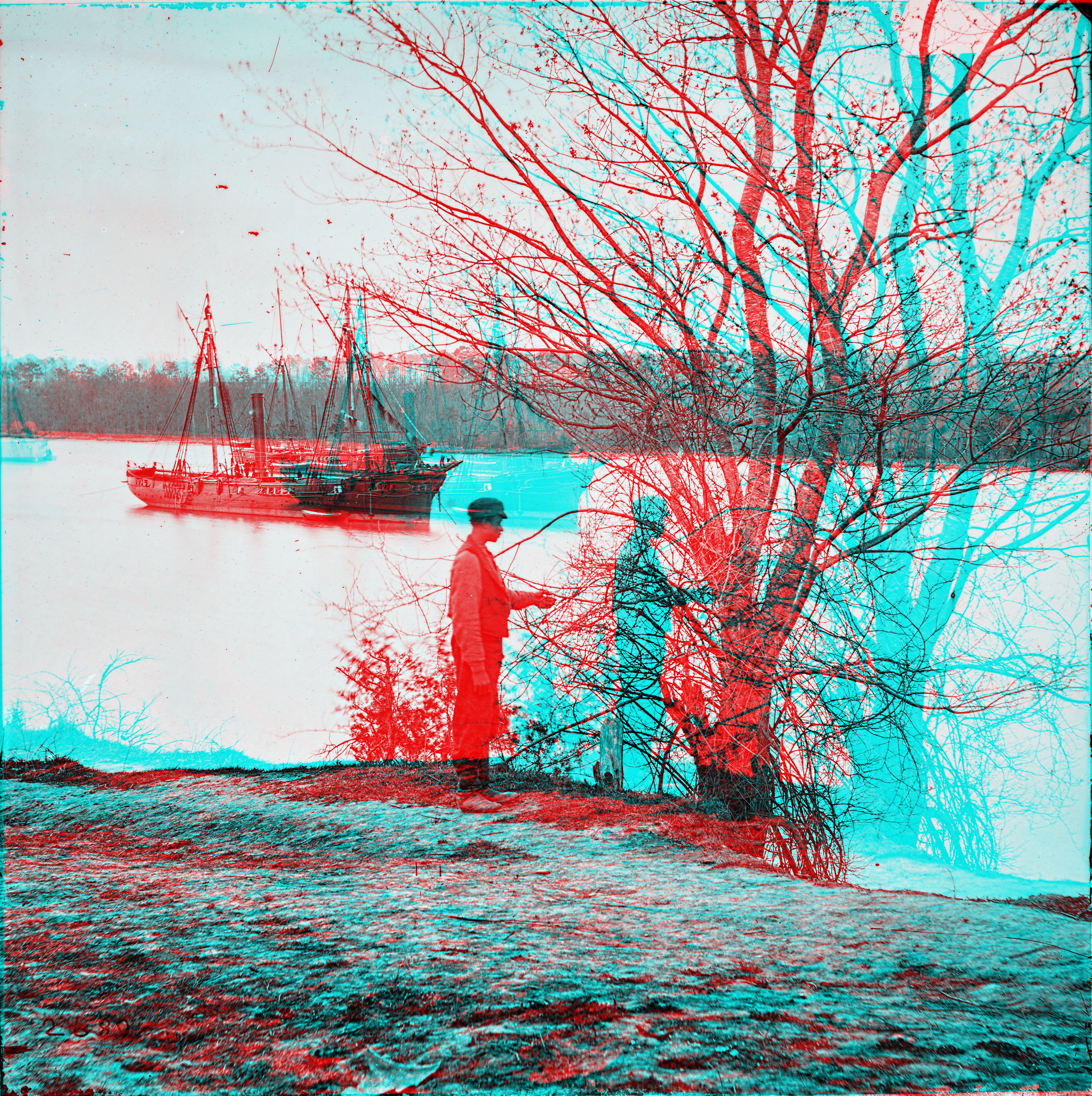 Analyzed by your red-and-blue viewer, this image will resolve only into a clichéd nineteenth-century stereoscopic composition, with the illusion of depth communicated by contrast between a merely pictorial detail in the foreground and a subject communicating extra-pictorial significance at some distance behind it. Not much of the extra-pictorial significance will come through, however, because its photographer didn’t anticipate how much of its future history he’d have to document as a viewed object. The glyph’s foreground detail does its cliché chore well enough visually, but historically it’s too prominent to work well with the Library’s caption for the pair, “James River, Virginia. Ships on the [James River].” At that, the craft in the river aren’t technically ships. Less complete but more accurate, and hinting in its incompleteness at a potentially more complete history, is the label on the negative’s original envelope: “Boat on James River.”

Specifically, gunboat. After I supply that three-letter addition to the text, you’ll notice the gun on the boat in the background, and then you’ll notice a second gun (covered) on the boat in the foreground. Oh yes, explains my three-letter augmentation: you’re looking at an image created as part of the Civil War — in the spring of 1865, I’d guess, to judge from the military history I’ve consulted offline and the state of the tree’s foliage online. After that first addition, more become available, and now their source can open into the image itself. Oh yes, says one of the new, image-born corrections: the detail in the foreground shows a man who is black, and furthermore his blackness is no longer just pictorial, no longer merely a contingent detail of the composition. The blackness now takes the form of a living man. This man who is now seen to be black can now be seen to take part in a new, free way in returning spring, and his freedom is owed, as a matter of non-pictorial truth, to the black boats pictured in the stream behind him.

So let me make a compositional correction to this image of a river and its margin, cropping it and adjusting its contrast to make the black ships more prominent by blackness and the black man more prominent by lightness against the black. The moment I do that simple Photoshop thing, the composition too seems to become visible in a new way, as if it has now come to depict both an excerpt from an archival history of the dead and a suspended instant of dance. It shows us a vernal gesture signifying a coming of guns. 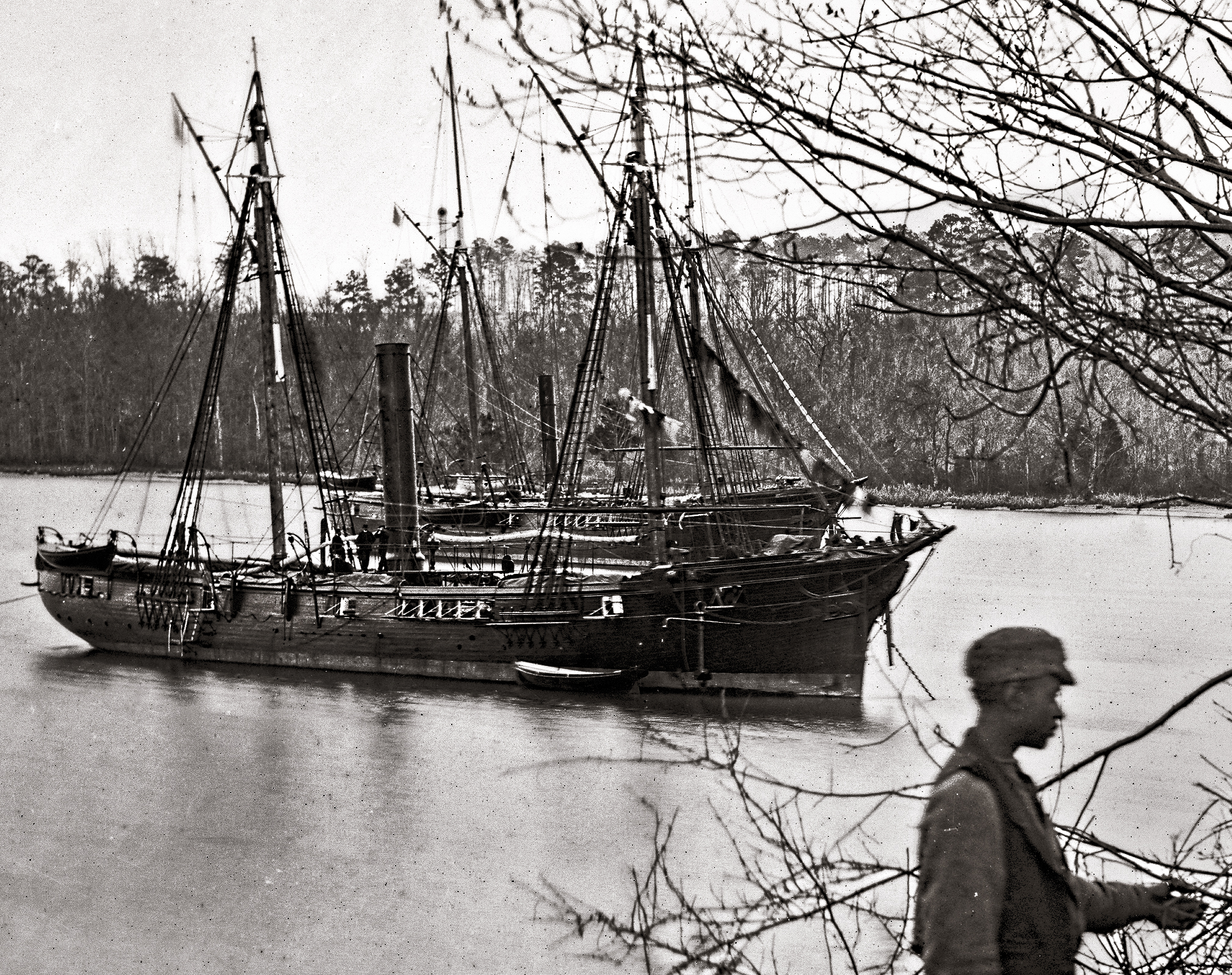 Gesture may require a different kind of historiography from the one that generated the static one-liner, “Boat on James River.” The still, moored boats, those “expensive delicate ships,” turn out to be freighted with only one significant detail each: a gun (now obsolete and merely historical) at the prow. But the man and his moving hand are now seen to be reaching outward forever. That which has freed the man is now behind him, and he and we are now companioned together, dancing along one of the margins of time.