According to Christopher Busta-Peck’s blog about the history of Cleveland, this dark image depicts the moment on March 25, 1913, when flood currents drove the ship William Henry Mack into the swing bridge spanning the Cuyahoga River at West Third Street, demolishing it. 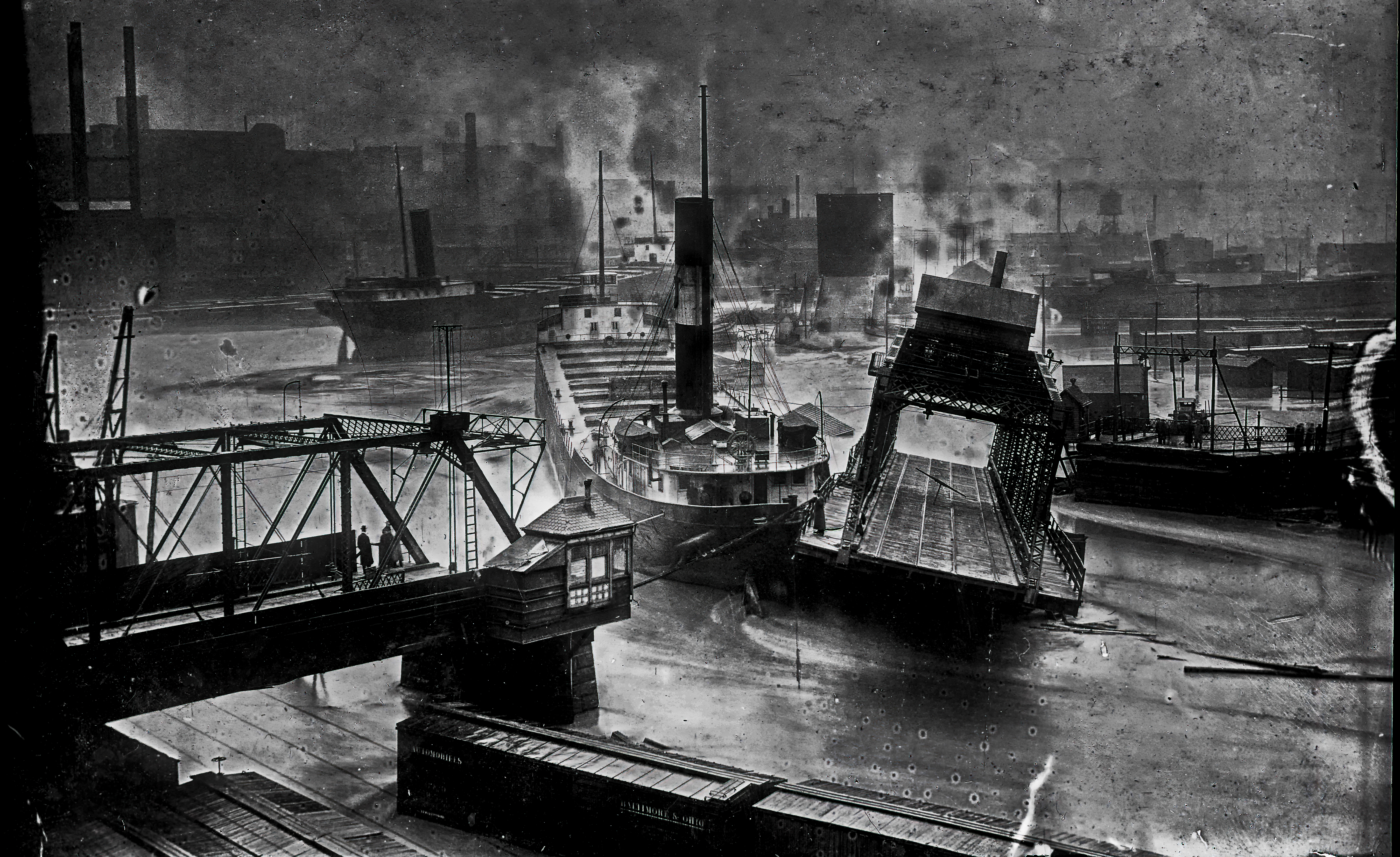 Like the prose you’re now reading, Mr. Busta-Peck’s blog is set in the font called Georgia. According to the Wikipedia article “Georgia (typeface),” this font belongs very much to the history of the computer. Its date of origin is 1993, and it was originated specifically to fill a need for legibility on low-resolution monitors. There it is read by default in monitor mode, the mode of prose: transparently, offering access to language’s content (what freshmen call “the message”) while making only the necessary minimum of contact with language’s form.

Mr. Busta-Peck’s Georgia-inflected words about the flood are readable at http://www.clevelandareahistory.com/2009/12/floods-of-1913-in-flats.html, in a post dated December 26, 2009. They manifest themselves onscreen in a monitor alphabet that was deliberately intended only to be looked through, not seen in itself. But to Ernest Fenollosa, a contemporary of the flood, it seemed desirable to write a story like flood’s not transparently but in flood’s own mud-opaque alphabet, as “a vivid shorthand picture of the operations of nature.” 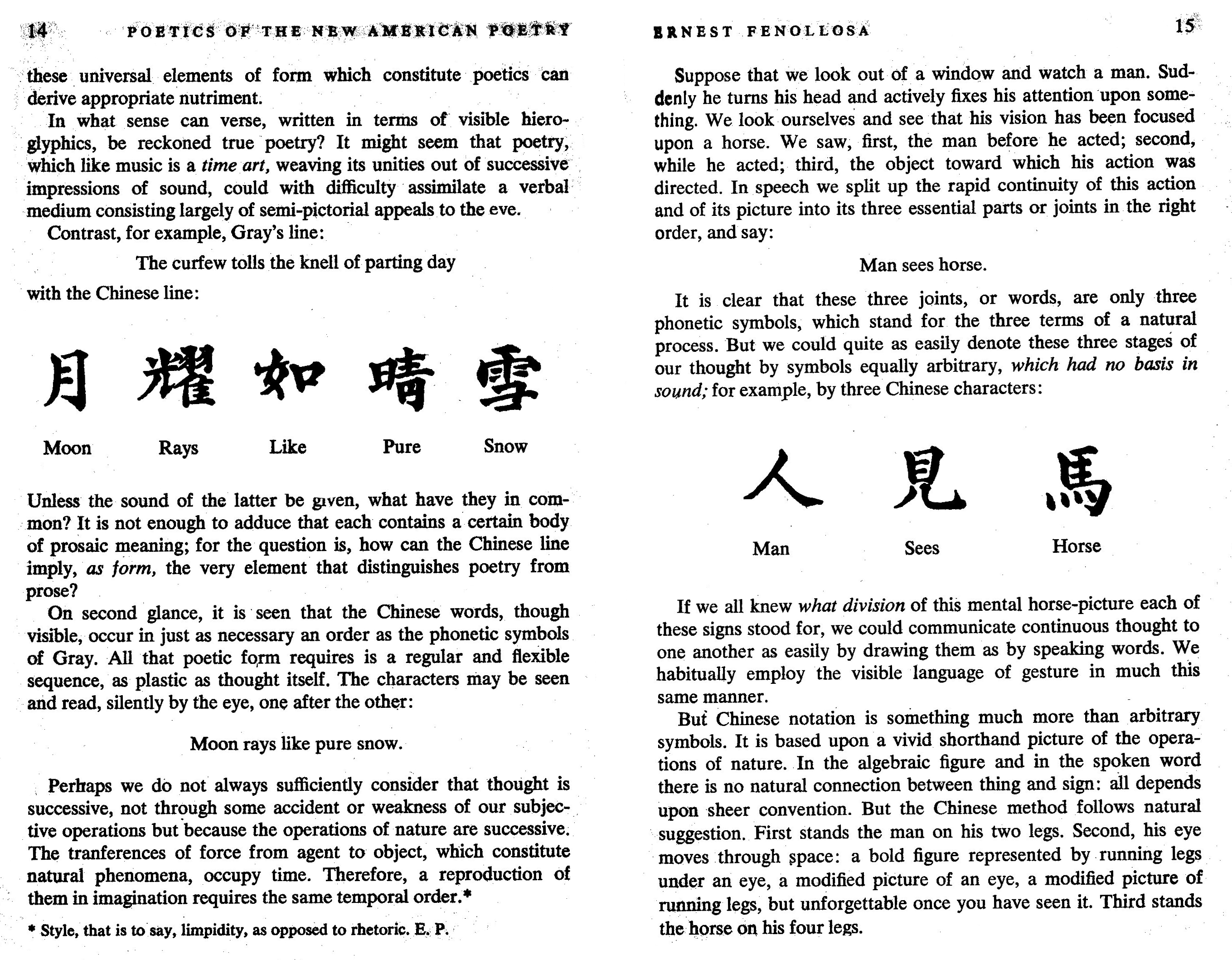 To Fenollosa, vivid shorthand meant specifically the ideographs of Chinese, where in principle a word is a thing. To Ezra Pound, who completed Fenollosa’s unfinished essay “The Chinese Written Character as a Medium for Poetry” after Fenollosa’s death, this meant writing poetry with a specifically poetic language technology. Pound’s preferred medium for that was the typewriter, and he famously subdued the apparatus to his poet’s will by means of James Whitcomb Riley dialect spellin’, the alienation effect of text incorporated from other languages, and the other alienation effect of isolating his verse’s signifying units from contact with one another by means of two hard hits on the spacebar after every word. But at almost exactly the moment Pound was making those small modifications in the machinery, some nameless scribes employed by the Bain News Service were composing their own “vivid shorthand picture of the operations of nature” directly upon records transcribed by nature itself.

They had the records, thanks to the operation of certain photochemical processes. They needed to write their shorthand picture. They could have done that the way Pound did, with a typewriter slightly modified to emit the look of bardic chant. But they did something more radical. Laying hands directly upon the negative that just a moment earlier had been flooded by reality, they inscribed. If the inscription didn’t look quite like any other human alphabet, that was because its mediation into language was incomplete. Some of its form remained untranslated, still in the language of nature. The scribes weren’t fully in command of that language because some of it remained in the state of nature: the state of things — that is, scratches in gelatin — which still resisted their reduction to mere words. No matter how they were written, the photographers’ words about the flood remained partly flood, partly inarticulate. 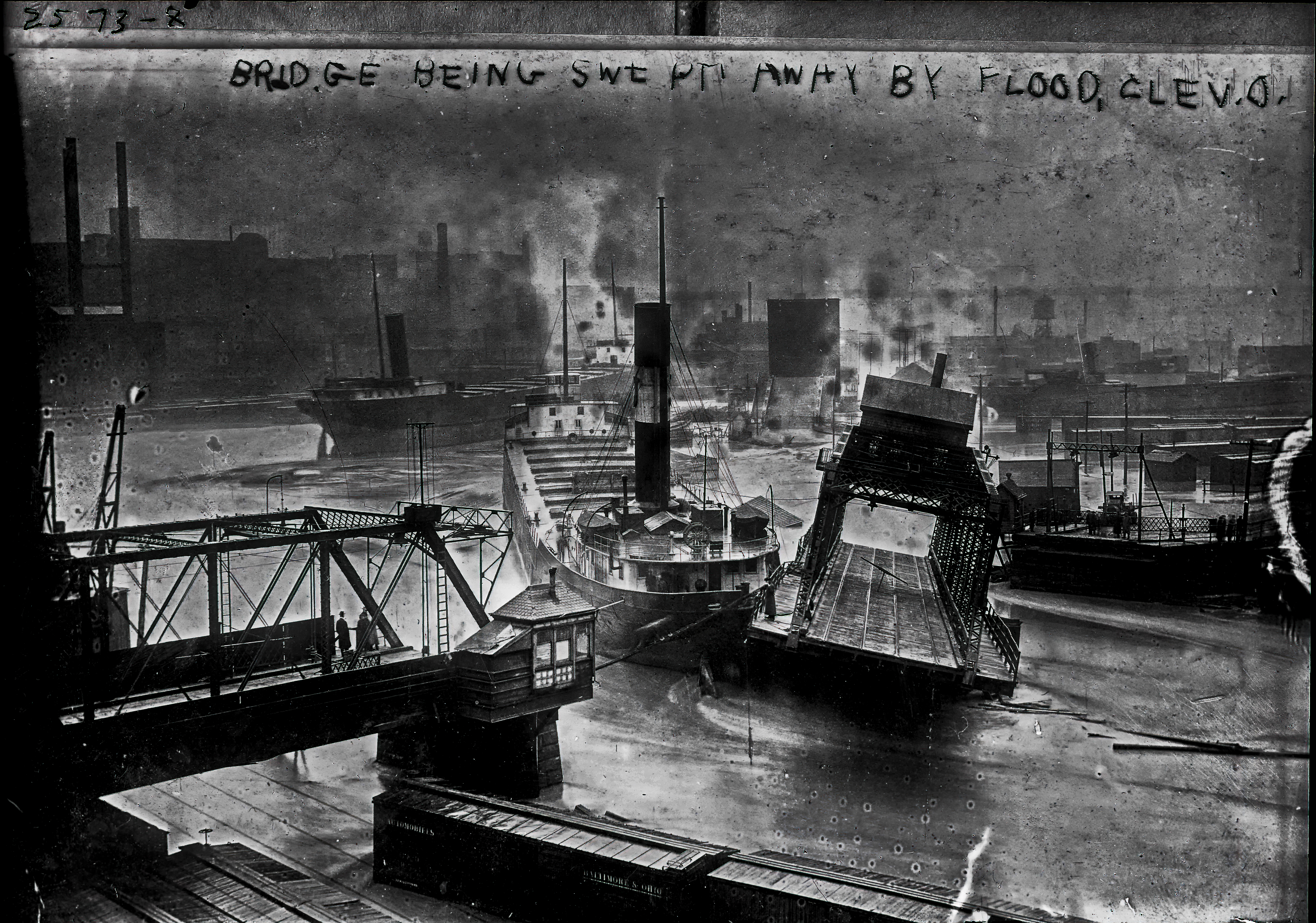 Still, look at the verb above: swept away. Trying to articulate a language of deluge, it has inscribed itself in a font that could have been named Debris. The instrument that carved it there was a stylus scratching letters onto a 5-by-7 inch glass plate named Negative. Because the letters have to be scratched onto the sensitive side of the negative, they have to be scratched in reverse. That’s why they look that way. They are morphemes of a language newly emerging onto a flood plain and teaching itself to write itself.

Think of a Chinese connoisseur writing a poem on a picture. If he does it right, the words he has sown with his inkbrush will take root in the picture and make its nature blossom into verbal meaning. That’s how the process works on dry land. But think of somebody stepping for the first time onto the mud deposited by the subsidence of the Black Sea, picking up a handful, molding it into a tablet, picking up a twig, and beginning to write on the wet new surface in his hand the story of Gilgamesh.

“Bridge being swept away by flood — Cleveland.” George Grantham Bain Collection, Library of Congress, http://www.loc.gov/pictures/item/ggb2005011625/. Adjusted for contrast and detail in Photoshop.