Jews have always stuck in the throat of English literature.

George Orwell’s history of the condition is succinct and accurate. “There has been a perceptible antisemitic strain in English literature from Chaucer onwards,” he explained to an American Jewish magazine just before the end of World War II, and after a long list of examples he concluded: “Offhand, the only English writers I can think of who, before the days of Hitler, made a definite effort to stick up for Jews are Dickens and Charles Reade.” One huge omission from this short roster of exceptions is George Eliot, and if you want to consider James Joyce a writer in an English tradition the list will lengthen from three names to four. But if you look for more, you’ll probably just find yourself rummaging through history’s bin of bargain curiosa. (Israel Zangwill, Edwardian Jewish writer with crossover appeal whose play The Melting-Pot supplied assimilation with a metaphor? Try to read, then put the book back. Henry Harland, American-born editor of The Yellow Book who in his New York youth wrote Jewish-themed novels under a Jewish pseudonym? Try to read, then put the book back.)

But once a Victorian poet with a case of Jews in the head was subjected to diagnosis by another Victorian poet. No improvement in the patient’s condition followed, but the documentary record does let us listen in on an interesting conversation that followed in the waiting room.

The poet with Jews in the head was Coventry Patmore, his diagnostician was his fellow Catholic Gerard Manley Hopkins, and the specific symptom was his poem “1867.” The poem’s title refers to one of Benjamin Disraeli’s triumphs: his capture on behalf of the Conservatives of the Representation of the People Act of 1867, the second of three Parliamentary reforms (in 1832, 1867, and 1884) that broadened the franchise in Victorian England. Patmore, a Conservative himself, didn’t approve of that, at all. As he indignantly explained to Hopkins in 1883:

I hate (in all charity) Lord Beaconsfield [Disraeli] more, if possible, than I hate Gladstone. . . . Do you remember the details of the passage of his Reform Bill in 1867? How it began by being a real work of defence against the tide of revolution, and how it ended – rather than Mr. Disraeli should go out of office – in actually consummating the revolution wh. the Radicals were only dreaming of? (Abbott 345)

He had been more poignant than that when he published “1867” in 1877. Then he had only cried with a tremulous quaver, 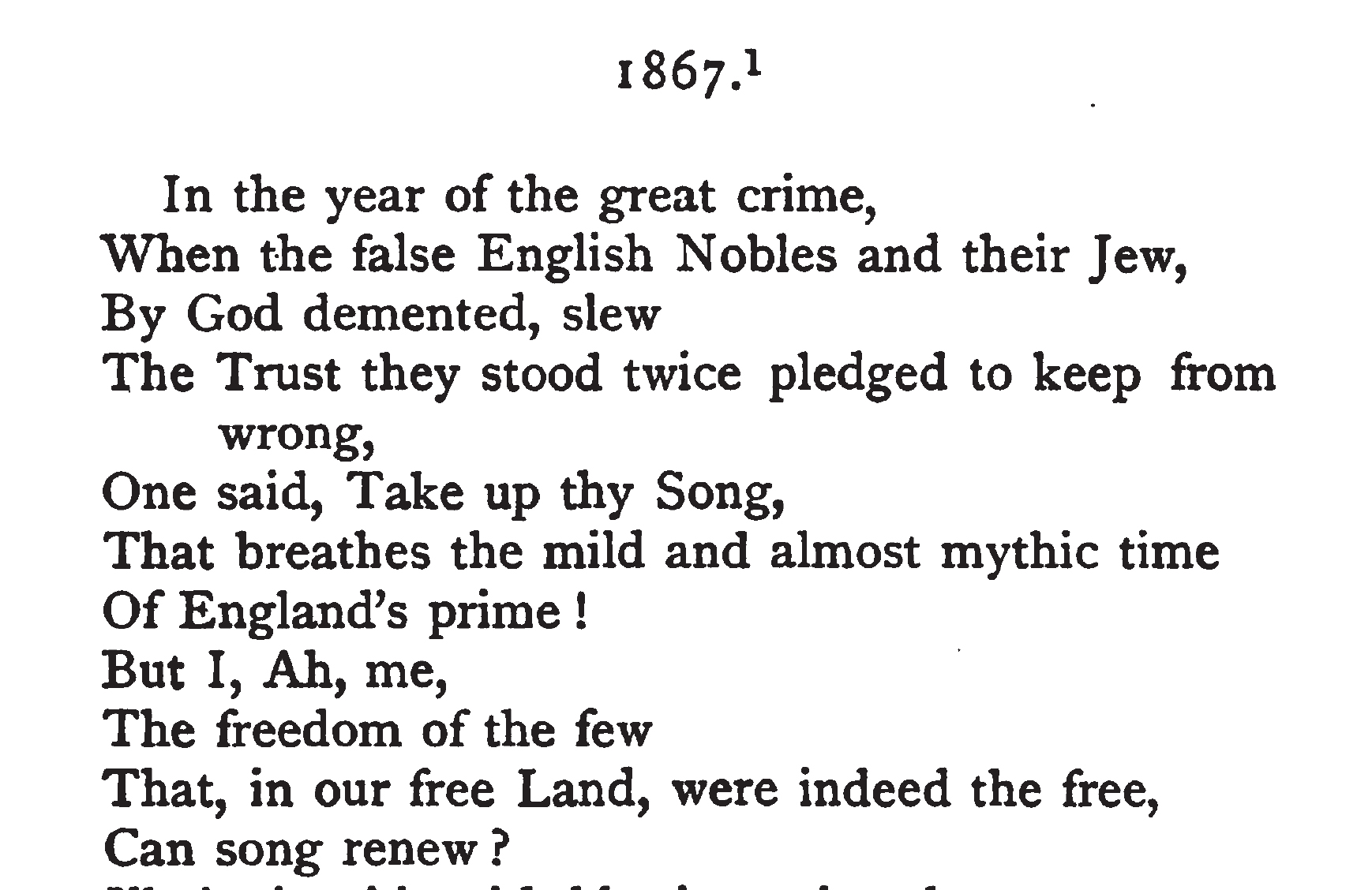 In 1877 it had been Ah, me. But now, in 1883, Father Hopkins was reinflating his bardic patient with rage and retrospective hate. Logic, said Hopkins; and not only logic but also theology; and not only logic and theology but history as well, all indicated flaws in Mr. Patmore’s analysis. Inexorably Hopkins’s Scotist prose spooled out onto the page (Abbott): 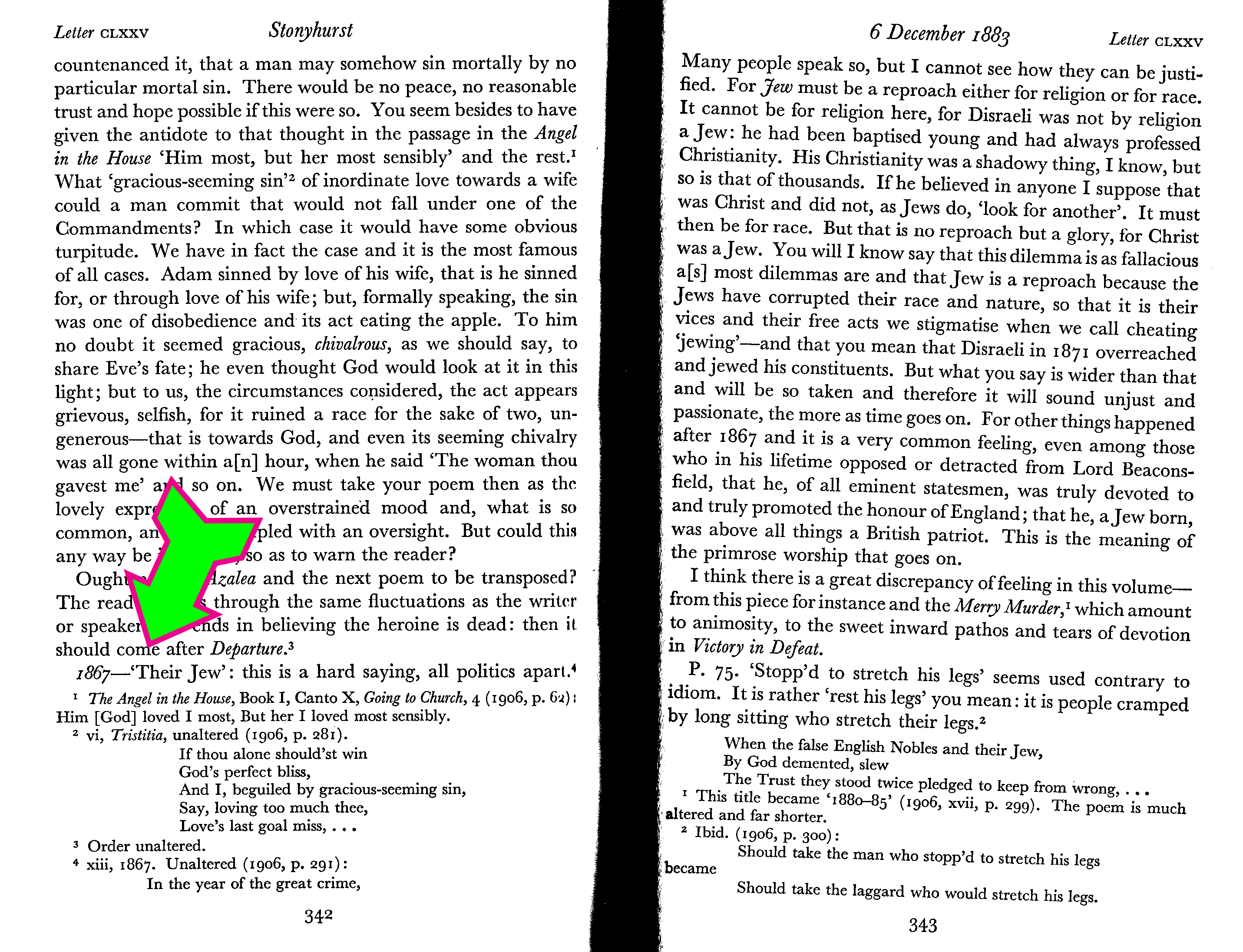 And Mr. Patmore merely hated that. We know this because when he republished “1867” in the third edition of his collection The Unknown Eros (1890, a year after Hopkins’s death), he footnoted the title this way.

You aren’t surprised, of course. Of course the unconquerability of Patmore’s illogic is understandable. Hopkins was always losing like that. One of the many depressing souvenirs described in Robert Bernard Martin’s biography is the manuscript of a practice sermon with a line drawn at the point where Hopkins had to stop speaking because his fellow seminarians were laughing so hard at him. The Sea of Galilee, he had been preaching, is shaped like a human ear, and this teaches us . . .

No, Hopkins’s mind didn’t make the kind of associations among different realities that other people’s minds do. The idea that it might be alarming to lie down in a driveway in order to get the inscape of its sandy surface (another incident from the biography) didn’t matter to him or (take your pick) didn’t occur to him. Likewise, I suppose, it may not have occurred to him that a poet in the aftermath of Romanticism could have been rendered, by poetry, incapable of thought.

And then this particular poet also chose to insert in his poem a three-letter combination that can drive even sober prose crazy. It appears from the evidence of what followed that saying the word “Jew” in a way sanely comprehensible was beyond the skill even of that subtle madman Gerard Manley Hopkins. In the years since this exemplary failure of language, we readers ought to have taken its dangers closer to heart than Hopkins did, or could have felt any need to. As the weeks tick down to the beginning of the 2015-16 academic year and the next wave of anti-Israel hysteria, it will be interesting to see whether we have.