In January 2015, the cyclical history of Martin Heidegger’s post-World War II rehabs and relapses entered a new phase when the chairman of the Martin Heidegger Society resigned his position, stating, “As chairman of a society, which is named after a person, one is in certain way a representative of that person. After reading the Schwarze Hefte, especially the antisemitic passages, I do not wish to be such a representative any longer. These statements have not only shocked me, but have turned me around to such an extent that it has become difficult to be a co-representative of this.” (http://dailynous.com/2015/01/19/germanys-heidegger-society-chair-resigns/)

The phrase Schwarze Hefte (“black notebooks”) refers to a group of previously unpublished manuscripts which are only now appearing in print, on a schedule dictated by Heidegger. The notebooks are bound in black oilcloth, and in the first instance “black” is all the word schwarze means. But of course it also has moral connotations. These dark texts seem to make clear, if anything in Heidegger’s ambit is clear, that racism was one of the fundamental, constitutive parts of his thought.

Well, the history of the Fascist years is filled with stories in the style of Henry James about eminent people shadowed by their past. The reputations of E. M. Cioran and Mircea Eliade, for instance, were at least a little tarnished by their association with the Iron Guard, Romania’s peculiarly nasty Fascist party. On the other hand, the Nazi section of Herbert von Karajan’s curriculum vitae did him no harm in after years. If anything, it only added more excitement to his bad-boy reputation. Until recently, at least, Heidegger’s reputation seemed to luxuriate in an ambiguity strong on both sides, as when he deplored the Holocaust as just another instance of the inauthenticity of plowing with tractors instead of horses like God intended. Unfortunately, history doesn’t seem just now as if it will continue indulging Heidegger’s reluctance to resolve his dilemma. The dilemma itself seems to be little more than silliness on one horn and careerism on the other. But when the moral ambiguities of the Hitlerzeit were forced up against the moral ambiguities of the Cold War era, the human consequence was sometimes larger and more interesting.

In 1950, for instance, the German field marshal Erich von Manstein was convicted of war crimes and sentenced to eighteen years in prison. This was soon reduced to twelve years, and in the event he served only three. Almost immediately after his release, he was recruited to build a new army for West Germany, to be deployed against the enemy in which he had always specialized, the Soviet Union. Thereafter and therefore, official history decreed the former Manstein and his Wehrmacht to have been strictly apolitical, wholeheartedly humane, and motivated only by the ancient military virtues of uprightness and chivalry.

Look, therefore, at this image of the former Manstein leading his Romanian armies against the Bolsheviks. Postwar, you’re intended to see an apologetic in every element of the composition. Fluently dictating from a prescribed lexicon,  it tells you: Marshal Manstein, like his moral compeer Martin Heidegger, was (the phrase enters the mind prefabricated, a brick of cliché) an old-fashioned nationalist. You experience the whole history of the word “old” in his upright posture and stern, unflinching attentiveness to the world, in all of its evil and all of its tragic good. Within this image frame, nothing except the old-fashioned has been allowed to survive. If you try to read through or past or around the image to anything in its background (anything called history, for instance) you’ll probably fail. Standing firm and still within his car, Marshal Manstein is on his way to taking dominion everywhere.

That’s easy to prove. See for yourself: having experienced the image of Marshal Manstein, didn’t you flinch when you began experiencing this other image? 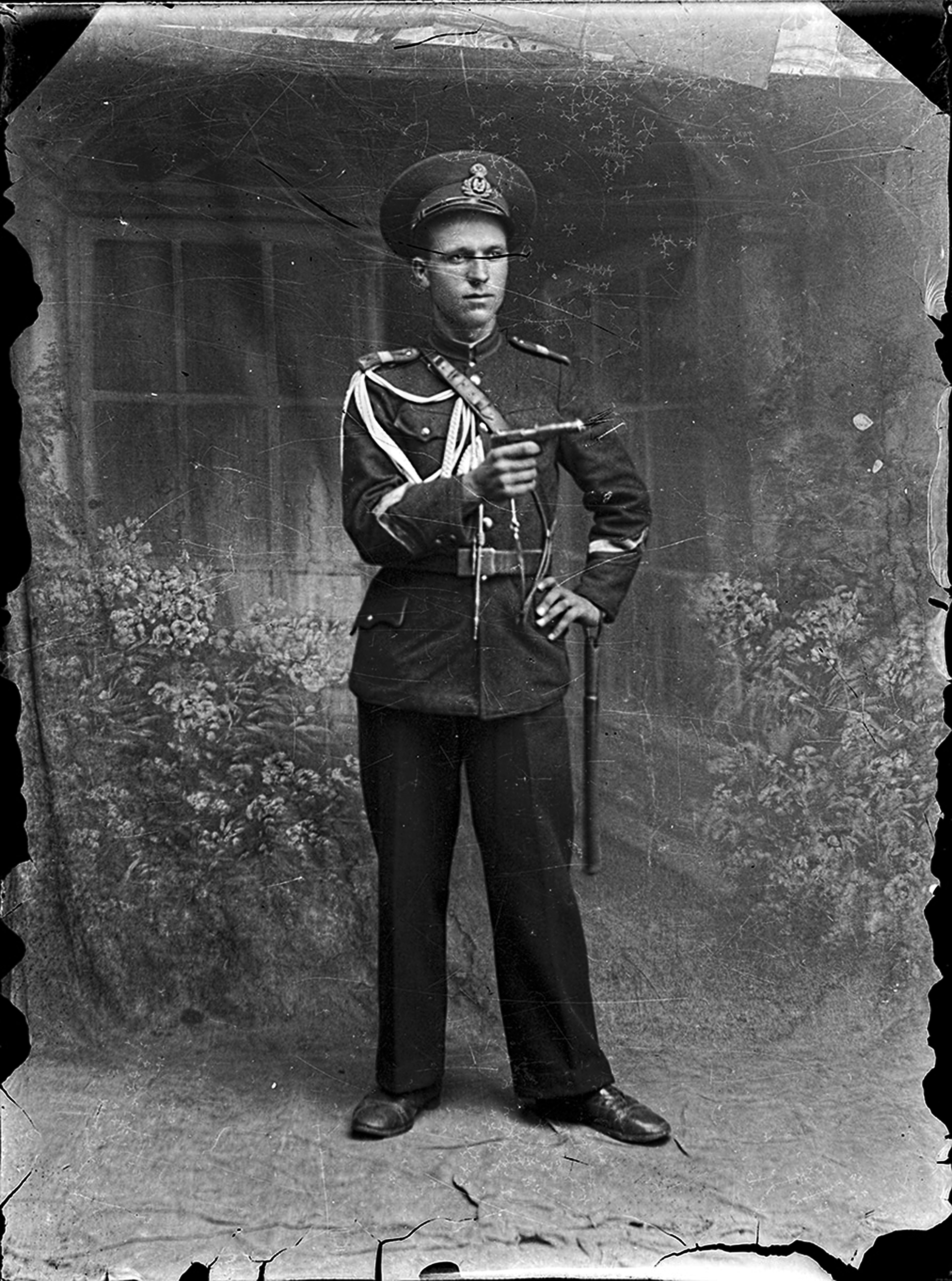 It was captured by the photographer Costică Acsinte (1897-1984), who between 1930 and 1960 operated a studio in a Romanian farm town named Slobozia. After the studio closed, his glass negatives were stored for decades under neglectful conditions until they were rediscovered by another photographer, Cezar Popescu, who is now preserving and cataloging them. His online archive is at http://colectiacosticaacsinte.eu/.

The paragraph you’ve just read is one way of accounting for the image’s history. Another way might be to open a book and start reading about Romania during the 1930s and ’40s, when the photograph was probably taken. A guide to Romanian officers’ uniforms could provide further detail, and in Slobozia there may, even now, survive someone who can attach a name and a war diary to the image of the young law enforcer, club at the ready, who is pointing his pistol at someone not visible in this image at this time — someone who happens to be standing to the right of the photographer.

What expression is on the face of the person facing the muzzle of the officer’s automatic? The officer is backed by a set from The Seagull or The Cherry Orchard, with flowers bordering a window and a door, but we’ll never learn who is about to walk forward from the camera’s vantage, speak the password that will make the officer reholster his gun, and enter the scene. Such an entrance would be an event. If the word could be spoken, the young man could relax his vigilance and begin speaking in his own turn. Until then, however, he can be nothing but a Manstein: a shape on photosensitive paper, serving a purpose off-camera.

His time on camera is short, too. Even as he waits for his event to begin, time is peeling his form away from its transparent backing. A break in the image’s continuity has already opened itself right across his eyes. He won’t be able to keep watch within the image frame much longer, and behind the image’s transparent support there seems to be nothing but dark. Still, the dark has a grammatical force of its own. Radiating forward to the image, it keeps it from communicating off camera. On camera, the officer’s uniform, a symbol written in a specialized code, may say “nationalism,” but it doesn’t seem able to translate the sentimental off-camera adjective “old-fashioned.” That which is old-fashioned is either thought to be dead or thought to be dying, and the historical record between Heidegger’s time and ours seems to show that the man with the pistol will live forever, just as he is imaged on camera here and now. The old-fashioned nationalist will never live to become old-fashioned because he isn’t going to die.

Sooner or later, too, we who still live in history may be able to imagine the pistol swinging in our direction. If that act of the imagination becomes possible, we will know that in this image Costică Acsinte achieved a work of art worthy of art’s terrible task of outliving.