In the foreground of the image is a boat carrying the first class. On its sturdy and cleanly varnished port rail rest the neatly folded arms of a woman decorated with a hat decorated with concentric circles. Under its brim, whatever can be seen of the woman’s identifying face keeps itself to itself. The image records only lowered eyes, directed downward toward whatever once lay below the image frame.

Simultaneously, on the opposite side of the boat, there can be seen a top hat. The facial features beneath the hat have been obscured, but the image records a hat glossily in place forever. In this lower part of the image, the formal in place is all that matters.

But what fills the upper half of the image is an object whose property of in place is different. Pale in the background haze, this massive thing differs from the hats and the faces that define the lower half because it has a name. Up there in its half it is only steel and bronze and coal, but so long as it also subsists as a name that can fill a page of history, it can never, unlike the flesh and blood of the first class, die.

Specialized for a double image like this one which divides along the locus where language makes contact with photography, a definition of history in human terms might be: that which has successfully replaced the sense of a body with the idea of an image. History is what came into being when a shutter opened and then closed again. An image was thereby cut off from the human life cycle, and the transitive verb establish thereby lost contact with its grammatical object. Thenceforth the image became a monument to the act of its having being established. In the achieved photograph, establish became a noun.

In this image, for instance, a lavish handful of first class people (I count 31 of them: thirty men and the woman in the geometrically decorated hat) have been metamorphosed into costume jewels. In their little jewelbox of a boat, they exist now only to accessorize the mass floating above them at the image’s vanishing point. Collectively, they are no longer a noun (“the name of a person, place, or thing”), because we can no longer conceive of them as having names independent of the name-bearing mass at anchor there in the upper half. Once upon a time the thirty men and the woman were in motion themselves, not looking at the hazed form as they passed by. The stretch of water that established their presence in relation to it was only a temporary strait mapped by the opening and closing of a shutter. But the instant when that map was drawn by a flash of light entering a camera has turned out to be forever. 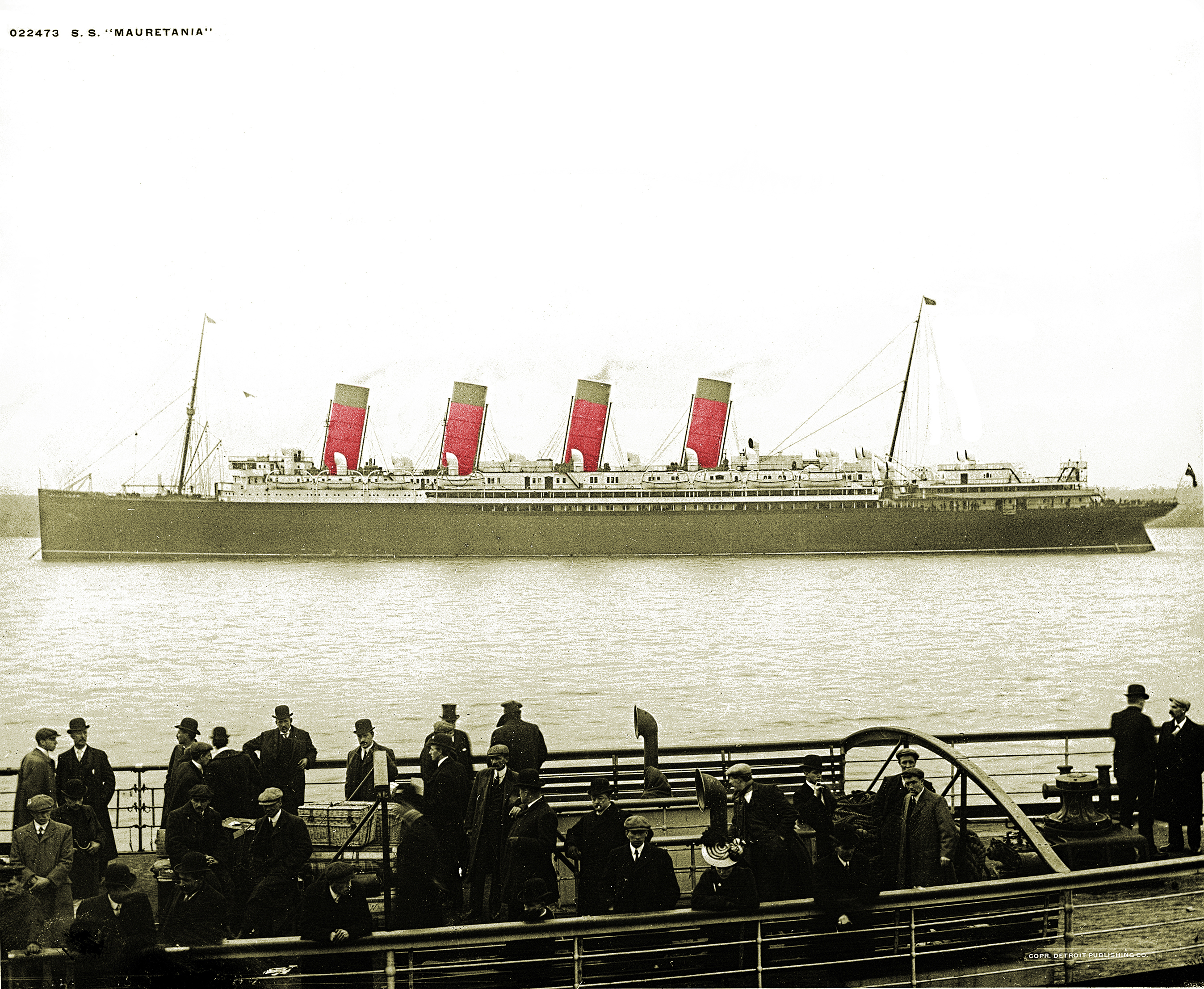 To judge from the seasonal clothing, this photograph may have been taken on or shortly after September 23, when the outbound Mauretania was forced by fog to anchor off Brooklyn. “Acrid Fog Grips City,” New-York Daily Tribune 25 September 1908: 4. http://chroniclingamerica.loc.gov/lccn/sn83030214/1908-09-25/ed-1/seq-4/