The photograph’s composition is unbalanced. The building on the left isn’t matched by anything comparably massive on the right, and the line of people extending all the way from margin to margin has no margins of its own. The people aren’t arranged in any obvious order, either. Some of them are looking at the harbor scene in the distance but others aren’t.

Within the image, we can see only detail by detail, each sub-image in isolation from the rest. It will take some help from literary cliché before we can even decide what’s represented by the details. In the crowd, for instance, there does exist an image of a skipping little girl in antique clothing, her feet poised forever above an item about to be swept away and a matched pair of shadows that will vanish likewise when the little girl skips away.

Counterbalancing that eheu fugaces platitude is another. No doubt, says this one: All the world’s a stage / And all the men and women merely players. In the play, a cynical emphasis falls on the “merely,” and here in the imaged crowd stands a predictable allusion. This one’s task is to illustrate man’s stage 6, the one named Pantaloon: his youthful hose, well saved, a world too wide / For his shrunk shank.

And all of this is too easy. Platitudinous moralizing is one of the clichés routinely evoked by street photography and its photographers. Look, cry Diane Arbus and Bruce Gilden: people suffer, and I laugh at them!

But here’s a third detail: one that barely shows us any people to laugh at, one before which moralizing and sadism slip away and evade our desire to be made to laugh or cry. Yes indeed: why are some members of this crowd still waving to the distant ship? They must know their signal can no longer communicate itself to anyone on board. What they’re doing isn’t even laughable. It’s only indefinable.

Well, language can help with at least that. Language asks us to take note of the barely legible words at the top of the image — “La Lorraine 8/5/14” — and then entrust ourselves to what lies outside the image frame, in the world. There in the world, some words preserved in a library can begin breaking the news that the cryptic inscription refers to the French Line ship La Lorraine on a date in the twentieth century. Furthermore, the date refers to far more than a mere maritime timetable, and the maritime business being transacted isn’t what is transacted on other days. The harbor is New York, the French ship is carrying French reservists home from the United States, and as of August 5, 1914, World War I is about to begin. Something henceforth central to history has begun occurring.

Heraldry, a visual genre of literature, has a technique for creating analogues for centrality. On either side of a genealogy chronicled across generations by a coat of arms, heraldry often places allegorical human or animal figures which face the symbols of history and encompass them with images of the living. Standing between the changing symbols at the document’s center and their not yet changed interpreters at the edge, these figures are called supporters. Signifying in their own representational way, they stand beside and second whatever it is that abstract symbolism seems to have to say.

And look: just before the photographer of August 5, 1914, set down for history his wide-angle memorandum of crowd and departing ship, he was able to move in for a different view: a tight shot sustained by supporters. That image, too, is still readable in the library. We could look it up, for instance, in a textbook of photographic composition. Unfortunately, however, the chemistry of decay has reduced the image’s central element to indecipherable glare. 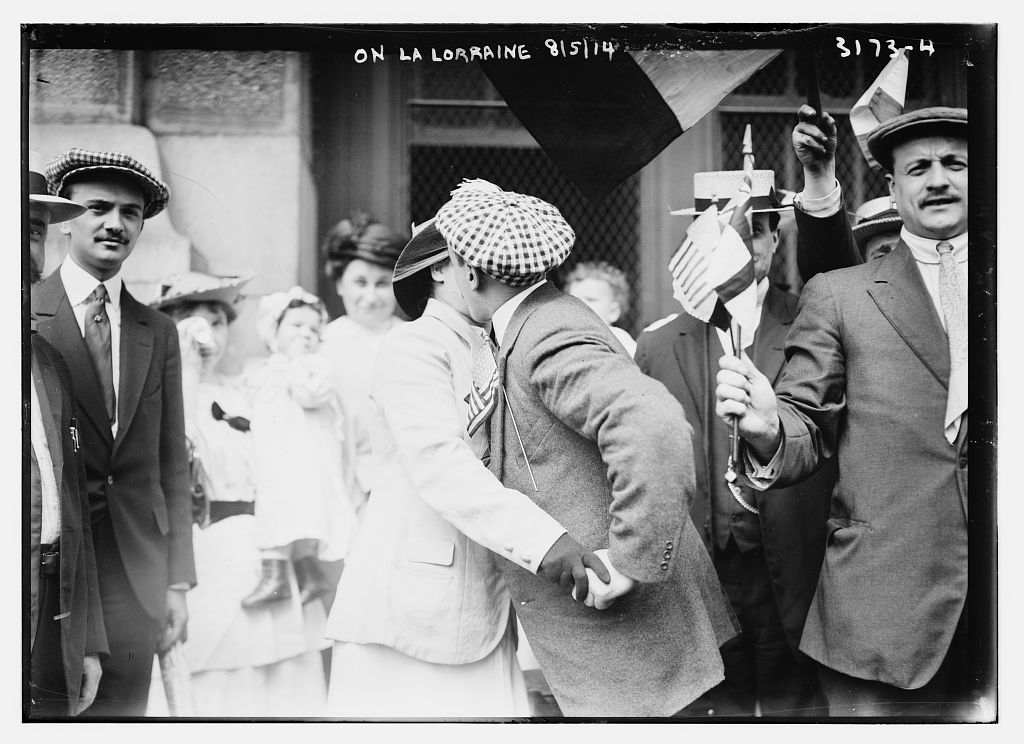 But it is recoverable. There, flanked by supporters, two lovers are now seen to part. Wordlessly, the unsupported central part of the image tells us that much.

And the supporters tell us the wordy rest. The supporter on the left may see the camera, may even understand thereby that his allegorical function is to represent the idea of a communication that has begun and will end in a single instant. But the supporter on the right has no need for either the lovers or the image into which they are about to enter. Holding his American flag and his Royal Navy ensign, he is looking straight ahead toward posterity. He is the custodian of the part of this image that is about to vanish. He is in charge of that which tells its story outside the image frame, in the library. On his side of the frame, the intent is to reassure. Don’t worry, say the supporter’s flags, waving to us spectators at the image’s front margin. Don’t worry; wave your summer hat at the ship. Don’t worry; we two wave and these two live, forever.

Only the decaying center where the lovers are would suggest otherwise.