The microfilm readers in the University of Hawaii’s Hamilton Library are now linked to computers running Irfanview. Scholarly readers no longer have to work with a copy machine’s blurry approximations of the film; now they can scan an image from the film, save the scan to a thumb drive, and then Photoshop that digital copy. Here’s an example of what that labor can make available: visible again after decades of deterioration, three photographs taken in Honolulu harbor just after the United States broke diplomatic relations with Germany on February 3, 1917. 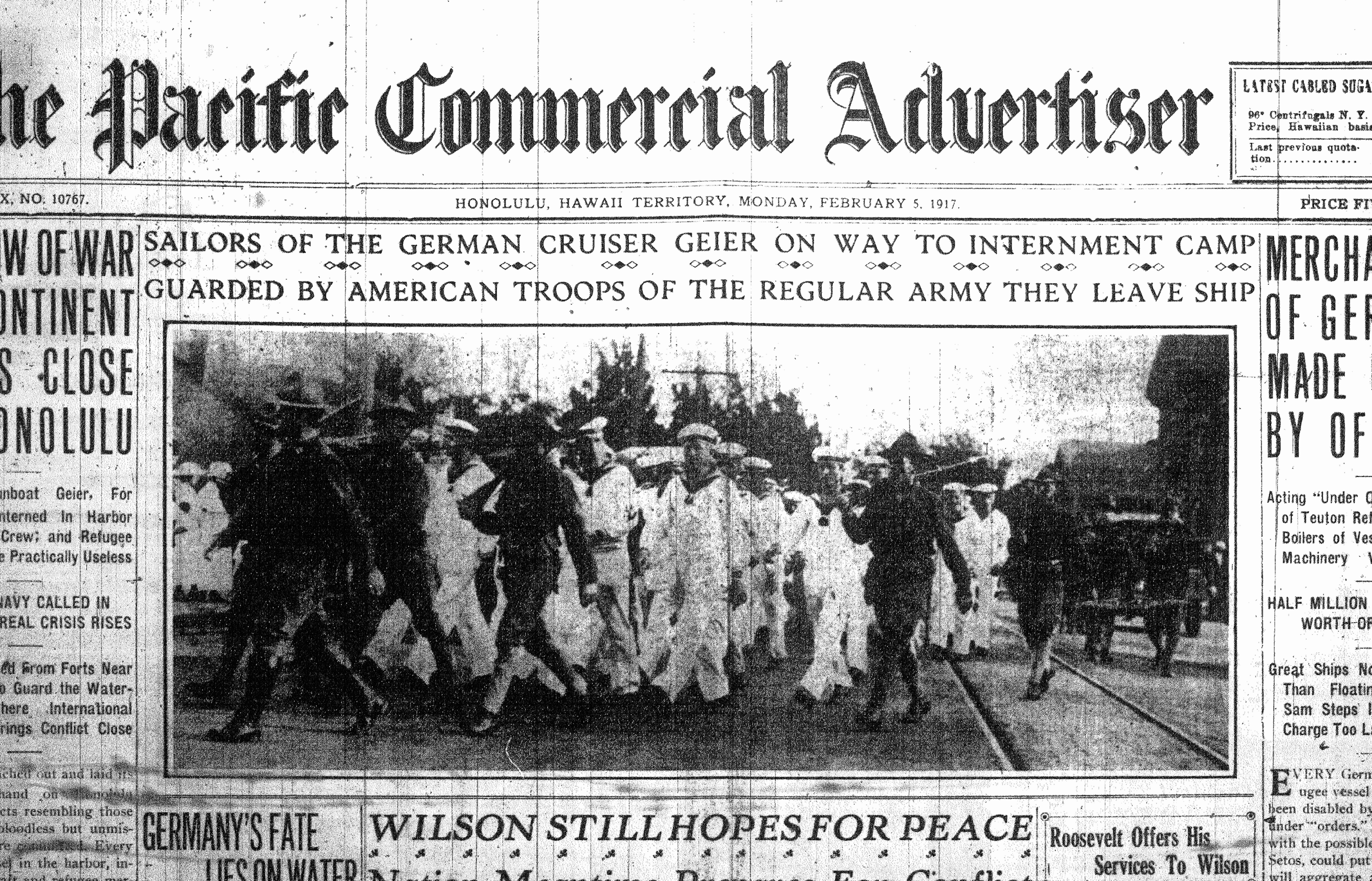 With the United States poised to end its neutrality and enter World War I, the crew of the interned German gunboat Geier had tried but failed to destroy their ship, and a photographer was there, recording. His editor called the results “snap shots of an event that may become historic.” And yes, an independent historiographic record of the event does exist. You can read about it at, for instance,

But that record may not quite be history. Readers mark the distinction with a cliché. We don’t quite say the stern word “history” after we close a book about SMS Geier; instead, we tend to Disney-fy our newly read text by calling it something like “a footnote to history.” If it’s the short story of a little warship at the edge of the Great War, beached in a backwater that didn’t become canonical in the history of war until the war that followed this one, then of course (we think) it doesn’t belong in historiography’s large print. Fine-print footnotes like the anecdote about the gunboat Geier are detachable.

Here in Hamilton Library, both the thick books of history and the reels of microfilm testify that the anecdote named Geier was detached a long time ago. The newspaper from 1917 is gone, its microfilm archive is deteriorating, and these images are unlikely ever to be seen again where thick books about the Great War are written. As to the white-suited civilian that Photoshop has now brought back as if he had never left his spot on a pier in Honolulu, he can never again be more than a white footnote to the anonymous anecdote of Geier’s white sailors. The civilian’s hat is still on his head and the wrinkles in his clothes still say that he has a hand in his pocket, but his face has gone under permanent shadow and his body has come under the striped mark of the printing from 1917 that has now obliterated his name. Without Photoshop, he wouldn’t be visible in 2012. But even with Photoshop, he’s now one of the unreadable parts of his own history.

Illusive immortality, then; merely anecdotal monument and memory. Photoshop drills itself into a slip of microfilm, penetrates and reshapes the images there, and then rises with them, glowing, to the surface of a monitor. There, the newly illumined images will endure for the single moment before vision’s format changes again.

Update, June 6, 2014: the unphotoshopped original of this picture of Geier in Honolulu is image 000104 in the Al Menasco photo album in the San Diego Air and Space Museum Archive,