The November-December 2008 issue of Gilbert, the journal of the American Chesterton Society (http://www.chesterton.org/wordpress), is devoted to the topic of “Chesterton and the Jews.” Its cover shows us a photograph of Chesterton in 1910 with the Anglo-Jewish writer Israel Zangwill. Next to Zangwill on the page the compositor has inserted a six-pointed star. 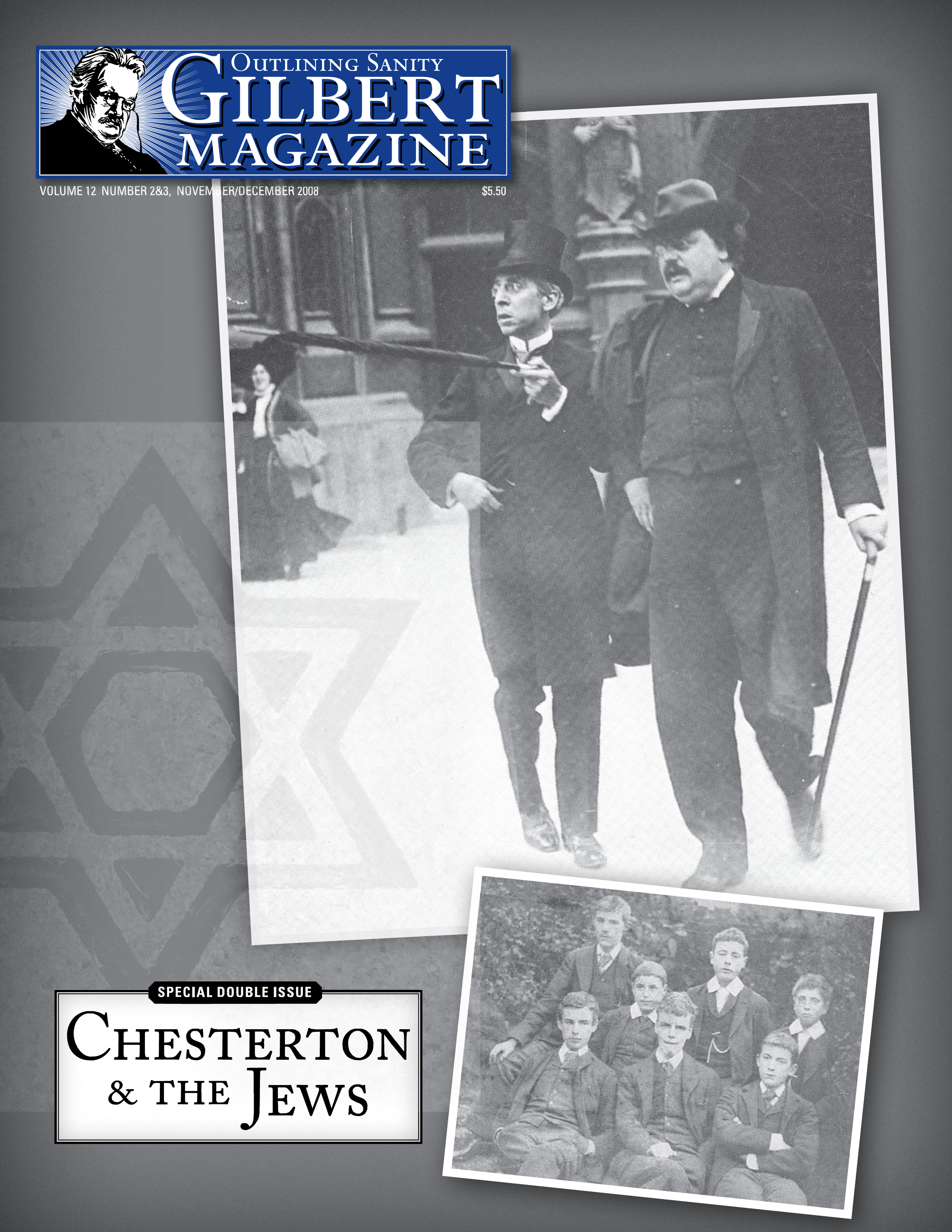 About that star, known to Jews as the Shield of David, The Encyclopedia of the Jewish Religion (Holt, 1966) says, under Magen David:

It has neither biblical nor talmudic authority and its origin as a Jewish symbol is extremely obscure. . . . [It] is mentioned by the 12th cent. Karaite writer Judah Hadassi, but developed into a distinctive and representative Jewish symbol only after the 17th cent.

That is, the Shield of David isn’t an icon, in either a religious or a semiotic sense. Jews don’t venerate the sign of the star; their distinctive and representative symbol is nothing but a conventionally accepted identifier. Positioned next to a picture of a Jew on the cover of a magazine about Jews, the star communicates the idea “Jew” only as a denotation. It is no more than a caption: a caption without words, because it doesn’t need words.

A few pages into the magazine, the star reappears as part of an article called “‘I Am Fond of Jews’: In Defense of Chesterton.” The article reprints in full the source of its title quote: a little poem. 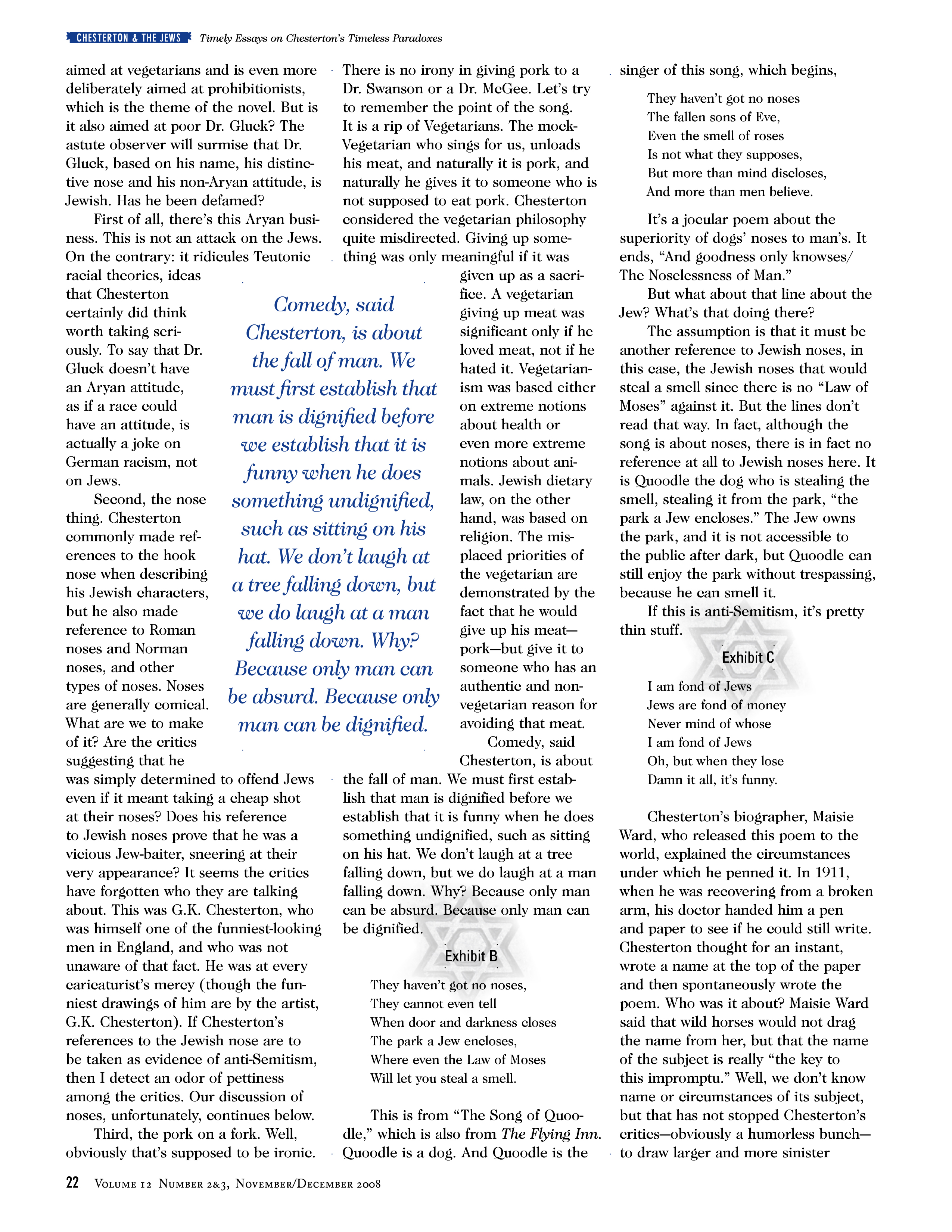 In the article, the poem is labeled like an exhibit for the prosecution: “Exhibit C.” It may be a little too easy to imagine tears of Chestertonian jollity rising to the author’s eyes as he regarded that delicate irony. But the six lines of verse are also labeled with a Jewish star, and (for me, at least) it’s more interesting to try to read the volition underlying that typographical gesture.

Because this isn’t quite the star that decorates the cover. On the cover, within the zone of connotation of a non-verbal image of a man, the star is a conduit for both verbal and non-verbal significance. It connects the man’s pictured image on the page (say, an image that isn’t but could be captioned “Zangwill in 1910”) with his existence in an unpictured but imaginable history off the page (say, a history titled “Jewish Writers in Edwardian England”). But in the magazine’s interior, the star is cut off from external reference and has to work as if it were a word. Within text, the star functions as what printers call a dingbat: a stylized picture typically used to break up blocks of type and communicate a pause – that is, an instant during which words stop functioning. That textualized silence within the text has communicative value, but its meaning arises only from its contiguity with the text. On a page of words saying only “Jew” to other words saying only “Jew,” a dingbat – even a dingbat shaped like a distinctive and representative Jewish symbol, with a history off the page – can only repeat “Jew” as if it were a word itself.

That inability to translate itself is the dingbat’s own distinctive and representative symbol. A dingbat is what is juxtaposed to words in order to communicate the idea of separateness from words. If language were spoken anywhere within the orbit of an actual Jewish star, it wouldn’t be the language of Exhibit C, and the American Chesterton Society wouldn’t be able to translate it. But the silent void that surrounds a dingbat can be a school for translation – a special kind of translation that speaks to us not as words to be heard but as symbols to be seen. What Chesterton means, and what the typographers of the American Chesterton Society faithfully translate for us in the interval between his words and their star, is a word followed by a dingbat. That two-morpheme unit says: