A missing comma made the sentence funny.

In the United States during the fall of 2011, a group of Republican candidates for President traveled from city to city, holding televised “debates” before enthusiastically Republican audiences. When one candidate was asked whether an ill person without health insurance should be allowed to die, people in the audience responded with scattered shouts of “Yeah!” The shouts weren’t at all scattered when a gay soldier spoke; that time the audience bellowed its loud and all but unanimous boos. The boos turned to high-volume cheers when anybody spoke the word “execution.” And as to the problem of immigration from Mexico — the more murderous a candidate’s suggestion in the way of high-voltage electric fences along the border, the more frenzied was the noise from the plush seats.

In Texas, the noise evoked a quiet response: a Mexican-American talk show host cut his Republican party card in half and posted a picture online. Reporting the cut, however, the Hispanic blog “¡Somos Republicans!” went noisy. It explained, “The Republican Party lost a long life [sic] Republican, who is a Texas Latino GOP leader due to the continued betrayal of the Republican Party.”

Well, I did take that sentence to class to do the English-teacher thing and talk about listening to the words. Oh yes: please listen, then please indicate the pause that wants to be heard before the phrase “due to.” Better still, eliminate “due to.” Best of all, rearrange the whole sentence into something like, “Because of its continued betrayals, the Republican Party lost a lifelong Republican, the Texas Latino GOP leader Lauro Garza.”  That version says more and says it more clearly, and it’s four words shorter too. But it’s also educational about words, and as such it misses the point of what it is to be a Republican. That point has nothing to do with words.

You can see this in a tellingly imperative word a few sentences farther down the page. Bellows the blog: “FOR THE CRITICS: Lauro is a long life [sic, again] Republican, staunch advocate of 2nd amendment rights and hunts religiously.” For Lauro, apparently, killing animals is in the first instance neither an economic necessity nor even a pleasure. It’s an act of obedience to duty, the noun that Wordsworth called “Stern Daughter of the Voice of God.” Connected with the noun “duty” by the adverb “religiously,” the verb “hunts” enters the special thought-lexicon of prayer, perhaps as prayer is defined by George Herbert: “something understood.” For the blogger who interprets Lauro’s trigger-words, to hunt is to go after God, for whatever purpose. Think of Ahab and Starbuck changing places.

In the same month that Lauro was wielding his scissors in Texas, Kurt Cardinal Koch, the head of the Vatican’s Commission for Religious Relations with Jews, was going after God in New Jersey with a different implement. A Jewish newspaper reported:

This past July, [Cardinal Koch] came into conflict with Rome’s chief rabbi, Riccardo Di Segni, when he wrote in the Vatican newspaper, L’Osservatore Romano, that the cross is “the permanent and universal Yom Kippur” and a symbol of reconciliation.

Di Segni responded in a subsequent edition of L’Osservatore Romano, “If the terms of the discussion are those of pointing Jews to the way of the cross, it is not clear why there should be dialogue.” . . .

When Koch was asked [in October] about his statement regarding the cross as the eternal Yom Kippur and the cross’s connotation to Jews as a symbol of persecution, he said, “I know the history what Christianity have made with the cross and I think that it is our duty to show that the cross isn’t a motive for hate. In the Christian view the cross is an invitation of reconciliation and I can’t understand because Jews can’t be content with this invitation.”

In a 1927 photograph from Life magazine’s online archive, Archbishop Eugenio Pacelli, Nuncio to Germany and the future Pope Pius XII, sweeps out of the palace of President Hindenburg and descends a short flight of stairs to his waiting limousine. His driver is saluting, as are President Hindenburg’s two rifleman sentries. Since approximately 1933, the silhouette of the riflemen’s helmets has borne an unfortunate connotation in the archive. But what the image preserves is a pre-archival instant in 1927, and within that instant the archbishop’s own silhouette has been fixed pre-archivally for all time, suspended for a fraction of a second just as it became a sign. Within the silent picture, for a fraction of a second of 1927’s time, it was as if a word had been spoken. As the archbishop stepped off the last riser into air, his foot passed under his cape and became invisible. There in his image, then and now, the archbishop has stepped and is stepping into ascending flight, forever. When he hunts his prey, he will leave a wake through heaven. 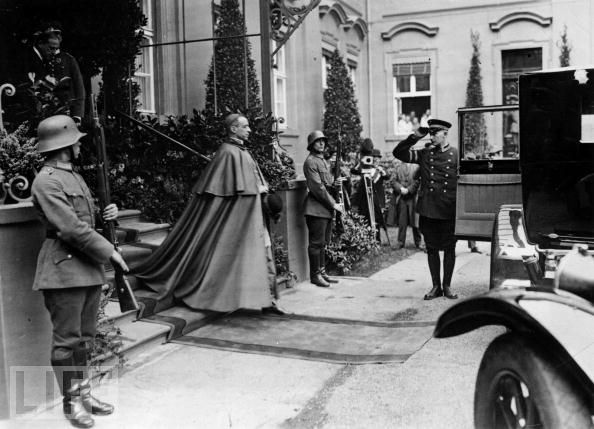 As to the mice in the shrubbery at the moment of the Nuncio’s ascent, they never were archived. The camera didn’t understand that they were present. They were only there to die anyway.