In July, the dark summer clouds rolling in from Lake Michigan would have been full of warm rain. But on the flat land beneath them, tiny people in white are moving about in ways that have little to do with the drama overhead. The people in white are forming themselves into a white group before a white arch.

The clouds and the flat land and the dark sky are vast. They have miniaturized and trivialized everything else in the image. An aerial perspective (in 1904, how? from a balloon?) has scaled down the big buildings and broad streets to fit the tiny people. “Welcome home,” say tiny words on the arch, but up there in the sky is something which is not to be engaged on any terms but its own. The clouds communicate only with themselves, and what they communicate is only moving air and light and the water from which they came, to which they will return.

Within its frame, the picture of clouds and land is captioned, “Welcome home of the General Overseer, Rev. John Alex. Dowie. July, 1904. Zion City, Ill.” Outside the frame, a few clicks in Google will construct a context for those words and convert them to a text illustrated by the people and their arch.

Zion City, Google’s texts can tell us, is a small town north of Chicago, now called simply Zion. With its broad boulevards laid out at the beginning of the twentieth century in the form of the Union Jack, it was a fully planned community with an intended population of 200,000: the proposed Vatican of a cult called the Christian Catholic Church. What it actually became you can learn here from the Zion Historical Society.

And about its founder and first ruler, John Alexander Dowie (1847-1907), you can see and hear a great deal at this site, including three cylinder recordings of Dowie’s voice and a colorized photograph of Dowie, “First Apostle of the Lord Jesus Christ,” in the priestly robes of Elijah the Restorer.

These words from outside Zion originate in yet another text: James Joyce’s Ulysses. When the historical John Alexander Dowie passed under his arch into Zion City, there to be overthrown by his followers and to die, he was returning from a tour of the world which took him — in Ulysses, though not in what’s called historical fact — to Dublin, where he passed through the mind of Mr. Leopold Bloom. Searching for Dowie’s words there, the Joycean Kevin McDermott has found them, embalmed them in historical context, and laid them to glorious rest in a cybermausoleum more lasting than any perishable city could ever be under its burden of passing, changing, indifferent cloud.

We clicked Google. It surrounded a photograph with words, but the photograph itself couldn’t be changed back to what it might have been in 1904. A century later, it has become nothing but an artifact. It has faded into its own sepia toning, visually and conceptually. But its visual aspect, at least, can be rejuvenated. All that takes is a few clicks in Photoshop.

The clicks transmute the image’s spectrum. They transfer its tonal range from the pale browns and oxidized-silver grays of a Frederick Henry Evans cathedral over to the glare and muddy green-blacks of a Robert Capa D-Day. Post-Photoshop, these clouds have a different kind of weather to dispense. It still won’t be the weather of 1904, of course. The rain that seems about to fall can no longer be thought of as what Zion City might have expected: a bestowal. Having been photoshopped, the sky over Zion City today is nothing but a formalism: not a manifestation of the presence of God, not even a natural map of regions of air, but only an either-or of black and white.

Those contrasty shades of black and white are on the coat of arms of photojournalism. They seem to tell us that Photoshop can bring history back to life and make it news again. Once more, as if no one need ever die, the sky of 1904 seems current. But under that reborn sky, the triumphal arch of 1904 seems even more ephemeral. The newly victorious sky has reduced it to an irony (“Little did the people of Zion City know . . .”). On them and on what we see now of the great flat land stretching to the horizon, Photoshop has brought down what we might call the Ozymandias Process: “Nothing beside remains.”

Before that moment descended on Zion City, we learn, Zion City’s policemen carried clubs and Bibles and wore badges emblazoned with a picture of a dove and the motto “Patience.” Patiently, let’s close that part of the history of this image and acknowledge that it has forever passed over into the region of sepia, where all will eventually fade to white. No, we’ll never again be able to understand this image. Yes, it is lost now, even as it survives on the page as an incomprehensible artifact. But if that thought comes to us through the agency of a written text, there’s a possibility that our loss may be irreversible but not irremediable. Inside Mr. Bloom’s head, James Joyce’s unillustrated words are still at work, translating the black and white of Zion City into bright color. 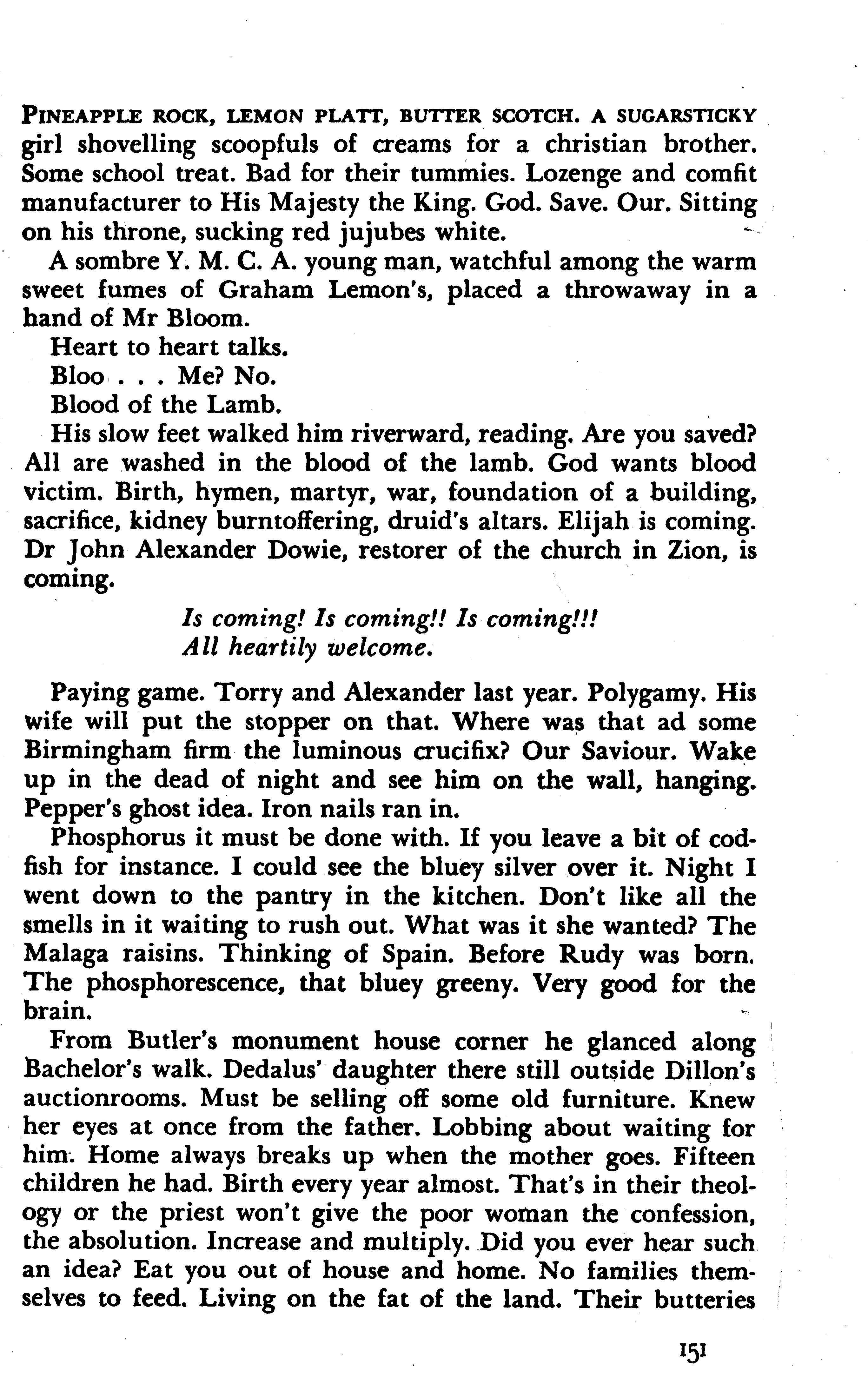 I thank Reinhard Friederich for showing me the DVD database Panoramic Cityscape Photo Collection (EURISKOData.com, 2001), where I found the image of Zion City.

Update, July 2, 2013: the image of Zion City was taken by George R. Lawrence (1869-1938), a pioneer aerial photographer who worked first with balloons and then with arrays of large kites, including one seventeen-kite array that lifted a 50-pound camera to an altitude of 2000 feet.

In the Library of Congress collection of Lawrence’s work, the aerial photograph of Zion City is image number 91 of 247.