A provisional definition: style is an artist’s way of arranging symbols that have passed under the control of imagination. When the symbols are changed (by, for instance, historical circumstance), our ways of imagining them change and the artists’ styles change accordingly.

An example: George Orwell’s explanatory essay “Anti-Semitism in Britain.” Published in the April 1945 issue of an American Jewish magazine, Contemporary Jewish Record, this article begins with a history of England’s attitudes toward Jews in the twentieth century — a history that breaks down into two parts: before Hitler and after Hitler. Before Hitler, Orwell says, Jews in England had to accept prejudice and discrimination at every level of society and throughout every cultural institution, high or low. That was simply one of the facts of British culture. After 1933, however, that fact became unacceptable, at least as an idea that someone might mention aloud. In “Anti-Semitism in Britain,” Orwell articulates the change in the field of his own art with the help of this catalog of before-and-after detail.

There was also literary Jew-baiting, which in the hands of Belloc, Chesterton and their followers reached an almost continental level of scurrility. Non-Catholic writers were sometimes guilty of the same thing in a milder form. There has been a perceptible anti-Semitic strain in English literature from Chaucer onwards, and without even getting up from this table to consult a book I can think of passages which if written now would be stigmatised as anti-Semitism, in the works of Shakespeare, Smollett, Thackeray, Bernard Shaw, H. G. Wells, T. S. Eliot, Aldous Huxley and various others. Offhand, the only English writers I can think of who, before the days of Hitler, made a definite effort to stick up for Jews are Dickens and Charles Reade. And however little the average intellectual may have agreed with the opinions of Belloc and Chesterton, he did not acutely disapprove of them. Chesterton’s endless tirades against Jews, which he thrust into stories and essays upon the flimsiest pretexts, never got him into trouble — indeed Chesterton was one of the most generally respected figures in English literary life. Anyone who wrote in that strain now would bring down a storm of abuse upon himself, or more probably would find it impossible to get his writings published.

Orwell might have had in mind something like this page from G. K. Chesterton’s record of his trip to the Holy Land, The New Jerusalem (New York: George H. Doran, 1920). 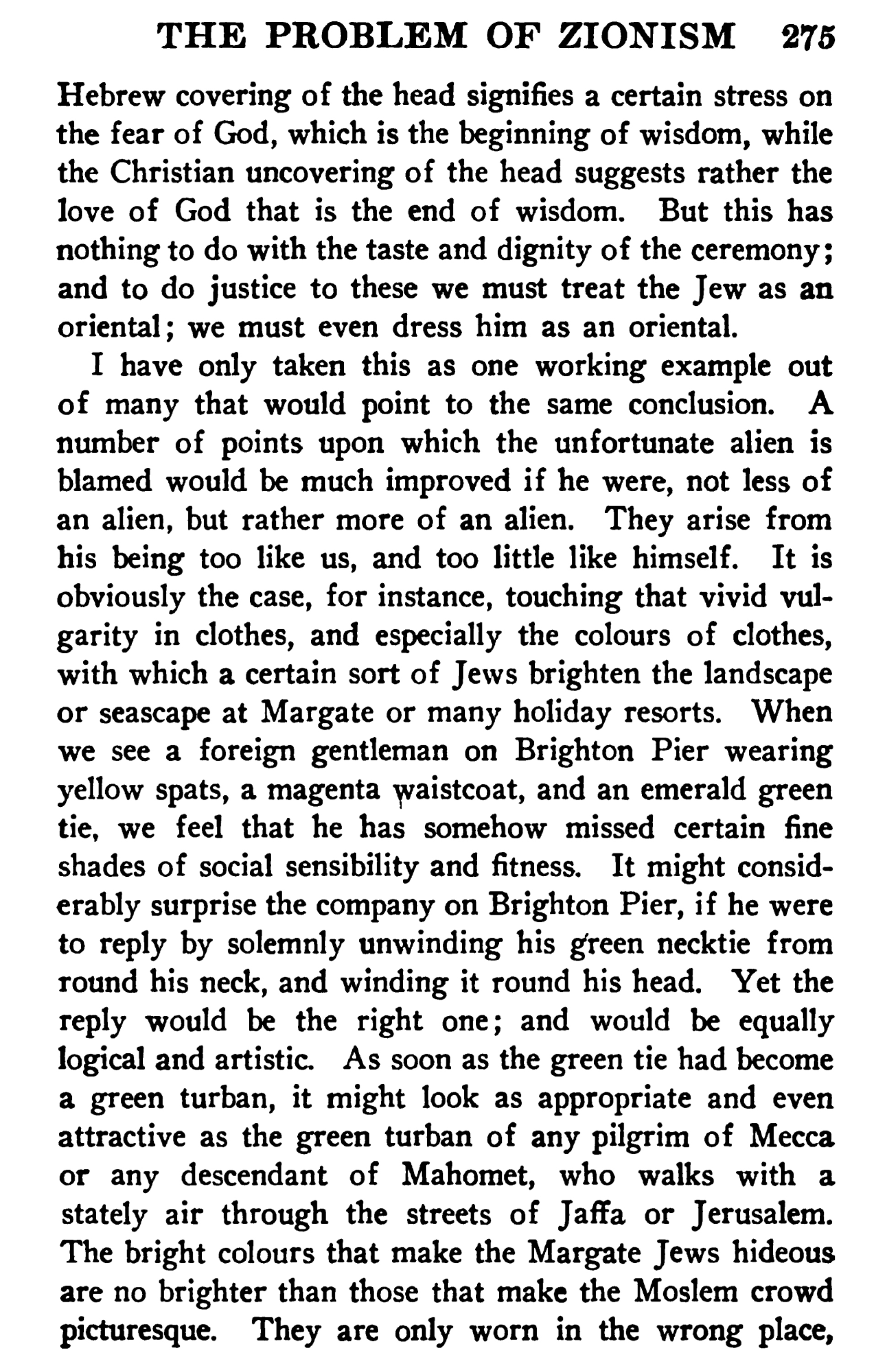 Chesterton has headed this page “The Problem of Zionism,” and we can see that he defines the problem as an artist would: in relation to his own creative impulse. For Chesterton, Zionism is a Christian artist’s gesture. Making the gesture, the Christian creator of a Zionist art will confine every Jew he sees to a ghetto and force him to look as different from the Christian as the Christian understands him really to be. After all, says Chesterton (who was educated in the visual arts at the Slade School), that act, performed with handcuffs and clubs, will be nothing more than an enforcement of the Platonic laws that govern the universe. Given real expression by those laws, truth is a style — a style in clothing, a style as a way of seeing, style itself as a universal grammar of perception, now translated into a human language by G. K. Chesterton.

Most of the images you’ll see of Lutyens’ buildings are imperial. In architecture, imperialism is primarily a style of conceiving and delineating: the abstraction of a building’s presence in a space whose human inhabitants are reduced to sketchy markings that serve to show the scale. But from Lutyens’ own time there has come down to us this striking photograph of an architecture at work in a counter-imperial space from which it draws the idea of  a style dominated not by stone quarried from the mute earth beneath the imperial map but by the wordy human body. 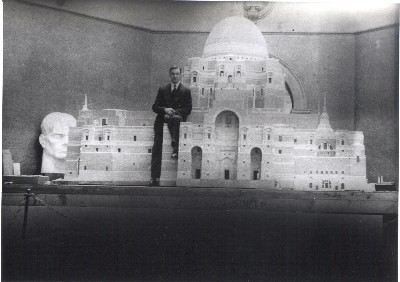 Left unfinished by the architect and only recently completed, this is Lutyens’ model for a Roman Catholic cathedral in Liverpool. If it had been built, the cathedral would have been the second-largest in the world. It was never built, however. At the outbreak of World War II only its crypt had been finished, and the postwar structure that now serves Catholic faith from Liverpool was built under the regime of a diminished imaginative power. As a symbol of transmission and perpetuation, its little circle of antennas or stick-figure crown (the cathedral is named Christ the King) is no match for Lutyens’ great egg full of light. 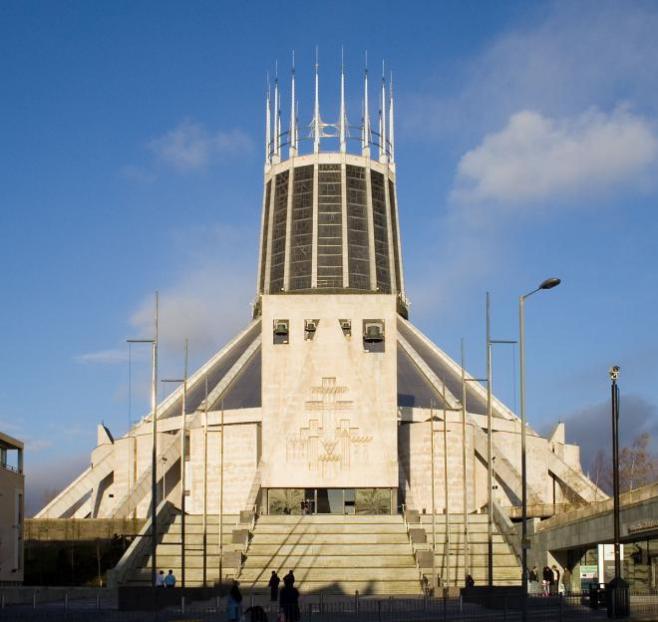 But look again at that blurry monochrome image of a church coupled with its man. If the church were a building, the man would make it tiny: a tabernacle, the housel of a god compacted to a symbol. Since the church is a model, the man makes it huge: a temple, the home of an unconfinable god. The reciprocating translations of scale are a continuous transformation. They prevent us from coming to rest in any single perception. They change our style of receiving reality from the Chestertonian sub specie aeternitatis to something unresting, ever rising from its deathbed.

That change is the gesture of a history capable of renewing the human through a sense of the real as a continual surprise. You could think of its effect as the advent of a Jew in an emerald green tie. To G. K. Chesterton such a sight in what’s called the real world (he named its purlieu: Margate) amounted to a blasphemy before God. He thought of it as a defiance of eternal styles, a peremptory demand for its own erasure. Chesterton even claimed the artist’s creative privilege of giving that erasure a name of its own. He called it Zionism.

But from his perch on the roof of the cathedral, the Jew in his green tie may yet be about to speak back to Chesterton and to us. In a language that won’t be Edwardian ever again, he’ll say . . .