On his Facebook page, the poet Alfred Corn plays himself as the educational version of Whitman’s Spontaneous Me: a Socrates who bestows questions, instant by instant, on the corpus of poetry. Professor Corn’s May 4 question, for example, was: “Can a poem indict or pronounce judgment and still be a good poem? Is, for example, Neruda’s poem about the United Fruit Company a good poem?”

Neruda aside, the answer is “Of course.” But on the Facebook page the exercise generated much excited brow-furrowing among the friends. The reason for the excitement may have been only pedagogical: Corn teaches modern literature, and in the here and now (any here and now) it’s hard to predict what is likely to last. Still, even here and now it wouldn’t have taken much effort to recall The Divine Comedy. If the words “poem,” “good,” and “judgment” have any meaning, then of course The Divine Comedy is a good poem, and of course it pronounces judgment. Indicting and pronouncing judgment are what saturnine temperaments do, and if someone with a saturnine temperament also happens to be a great artist — say, a Dante or a Swift or a Goya — then we’ll get great art that pronounces judgment.

So far, so sophomore survey. If it slipped the minds of Corn and his friends, the explanation may be no more shameful than a desire for unshadowed pleasantness during the act of reading. After all, garden statuary throughout the English-speaking world speaks to that desire by making a little verbal gesture of motto and performative self-description: 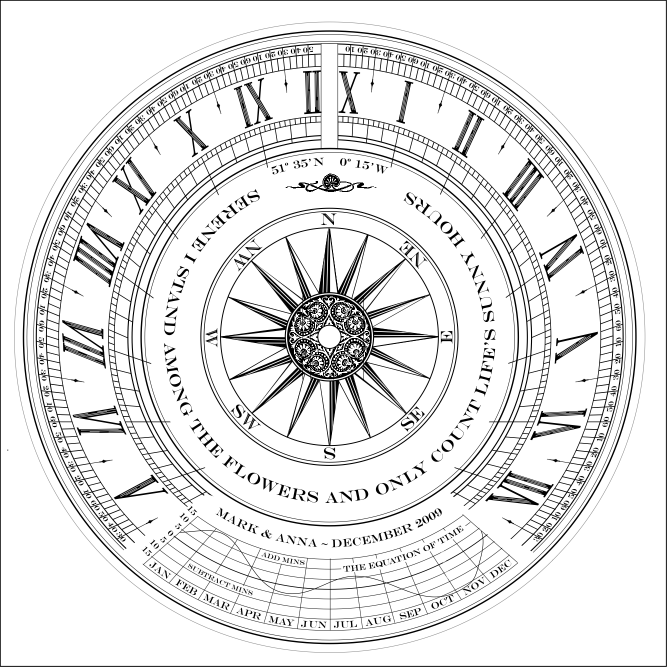 At the beginning of “Hugh Selwyn Mauberley” Ezra Pound took uncompromising exception to this sunniness. For his own motto and and self-description, he took a long view of himself in the third person, declared that third person “out of step with his time,” and then explained in bibliographic detail:

His true Penelope was Flaubert,
He fished by obstinate isles;
Observed the elegance of Circe’s hair
Rather than the mottoes on sun-dials.

That was in 1920, and as of 2011 Pound has long since fallen into step with the academic calendar. But it seems likely that sundials and their poem are still the more convincing pacers-off of time. From their garden in 2011, sundial and poem invite us to join the orbit of Facebook and become part of its unending cycle of nervous small talk and reassuring consolation.

But the inconsolable among us may still need the poetry of judgment for the different way it teaches us to look toward the sun. Consider Psalm 137, for instance. 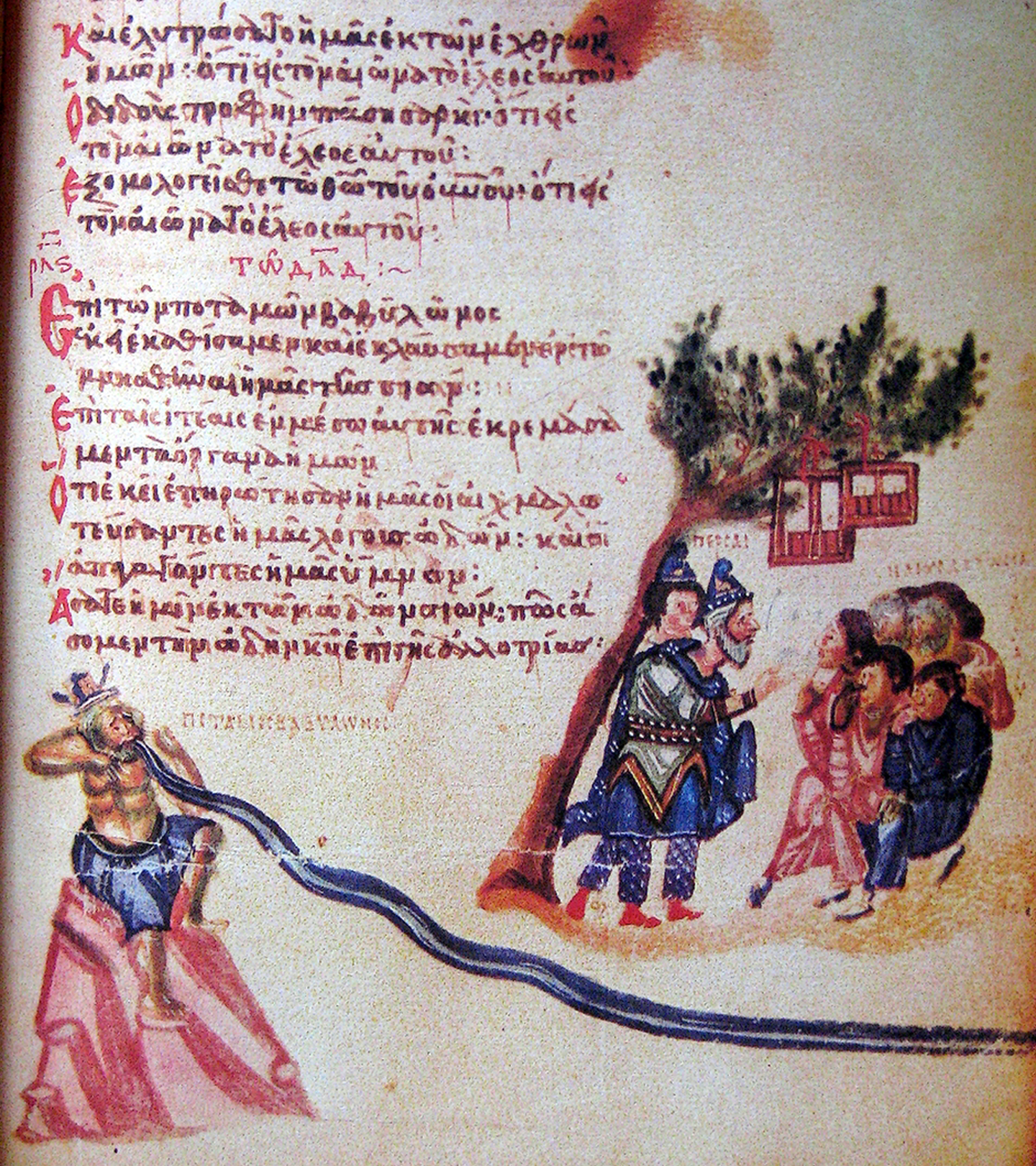 “By the rivers of Babylon, there we sat down,
yea, we wept, when we remembered Zion.”
From the Chludov Psalter (9th-century Byzantine).
http://en.wikipedia.org/wiki/File:Chludov_rivers.jpg
Photoshopped for color and sharpness

This river doesn’t follow the law of cycles. Its course is linear, with a beginning and an ending. It begins in the wordy cry of an uttering mouth, and it comes to an end at the margin of the parchment, where the words run out and (as the idiom has it, but usually not this literally) nothing remains to be said. 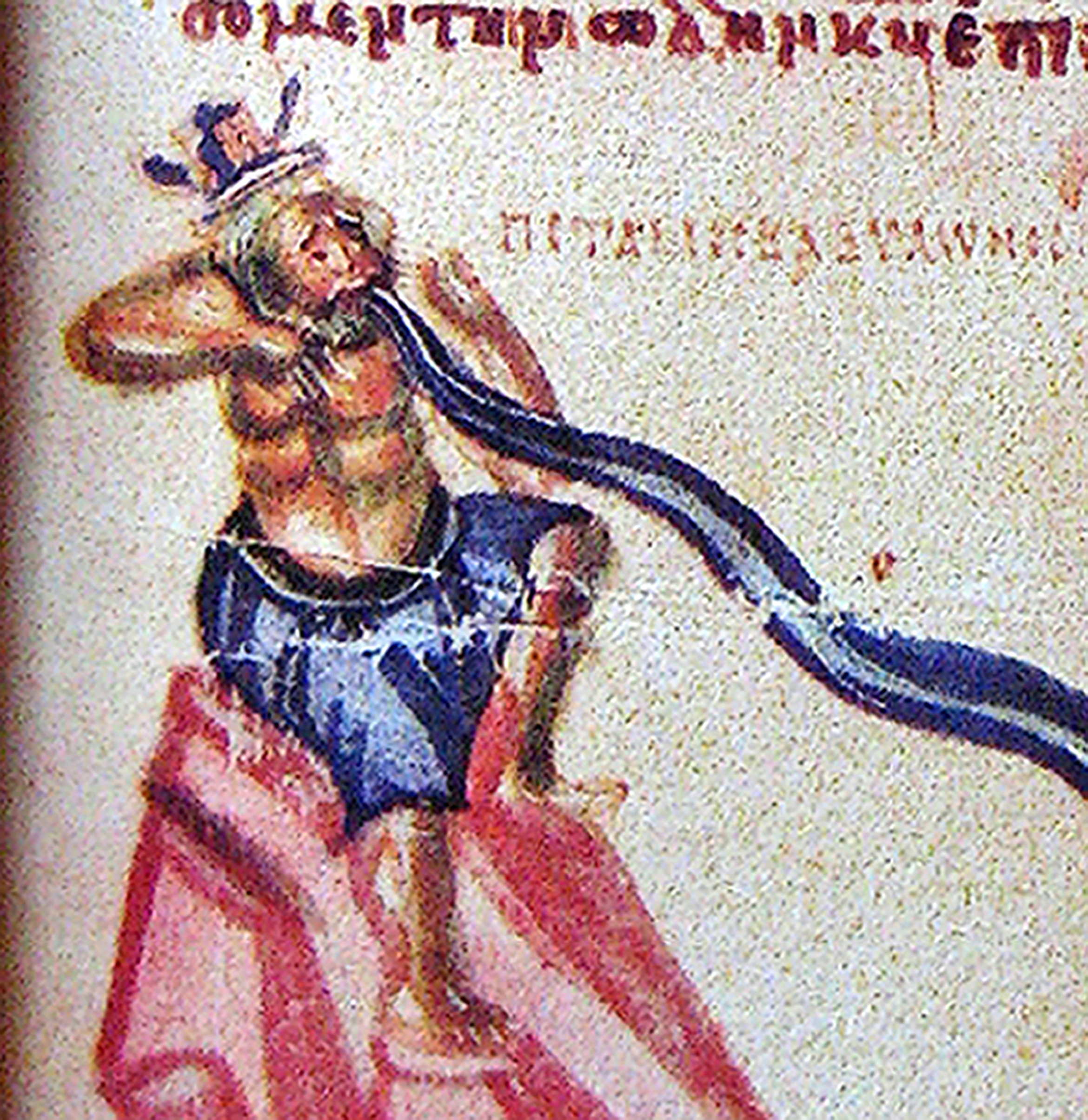 Once it has reached that wordless space, the psalm pronounces its judgment. Its penultimate verse is, “O daughter of Babylon, who art to be destroyed; happy shall he be, that rewardeth thee as thou hast served us.” In the English of the King James Version, the term “happy” has its old sense of “fortunate,” so this verse plays a grim, delphic word game with the vocabulary of gift exchange and reward. But where there are no clouds, the delphic must give up its smiling secrets. Irony evaporates from the words, they begin radiating a heat as dry as desert rock, and the psalm ends: “Happy shall he be, that taketh and dasheth thy little ones against the stones.”

When he drew those words, the artist of the Chludov psalter understood that in this text the river and the man must be one. Where there is no water cycle, every loss is irrecoverable and every word spoken is a word that is gone. Where the words run, man and river are one cry. In the light by which we read the cry, every hour is sunny.