Ernst Hanfstaengl had been a popular member of Harvard’s class of 1909. Wealthy, talented, gregarious and cosmopolitan, with an aristocratic German father and an American mother, he composed songs for the football team while he was in school and enjoyed productively networked friendships in New York afterward. Acquainted with both Theodore Roosevelt and Franklin D. Roosevelt, he was also briefly engaged to Djuna Barnes. In 1934, when the time came for his twenty-fifth Harvard reunion, he was named a vice-marshal of the class. By then, however, his country of residence was Germany, where he had become one of Hitler’s early intimates. 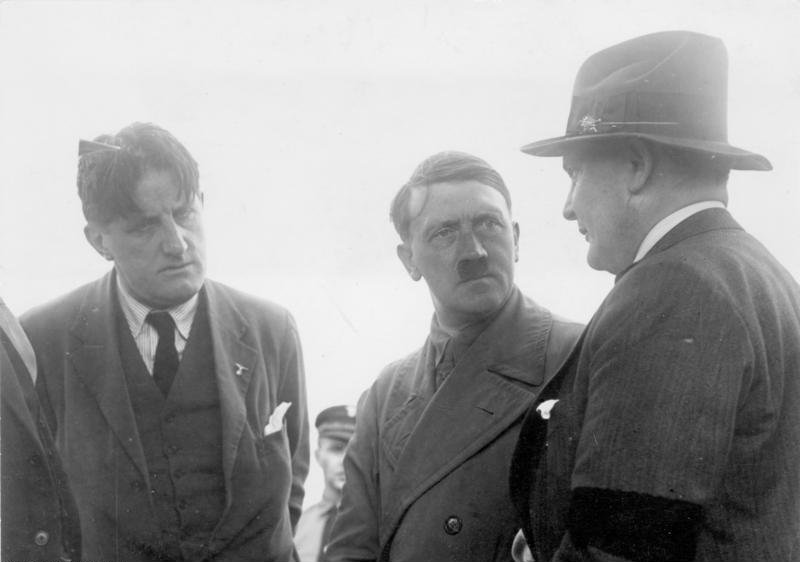 Hanfstaengl with Hitler and Goering in 1932, from Wikimedia Commons

By then, too, the nature of the Nazi regime was apparent. After students and alumni protested, Hanfstaengl resigned his honorary position at the head of his class, and on Harvard’s behalf President James Bryant Conant refused his thousand-dollar gift to his alma mater. Students also demonstrated against a visit of the German cruiser Karlsruhe to Boston, and arrests were made. In Cambridge, the spring of 1934 was a halcyon time for the emotions.

The emotions weren’t all on one side, either. At least two prominent members of Harvard’s humanities faculty, Francis Peabody Magoun, Jr., and George Kingsley Zipf, were openly pro-Nazi, and it was as Harvard’s Charles Eliot Norton Professor for the academic year 1932-33 that T. S. Eliot formulated his notion that there can be no place in a healthy society for Jews. Here, from the Crimson’s archive for May 17, 1934, is a little pragmatic souvenir of what the word “society” was capable of meaning during that time. 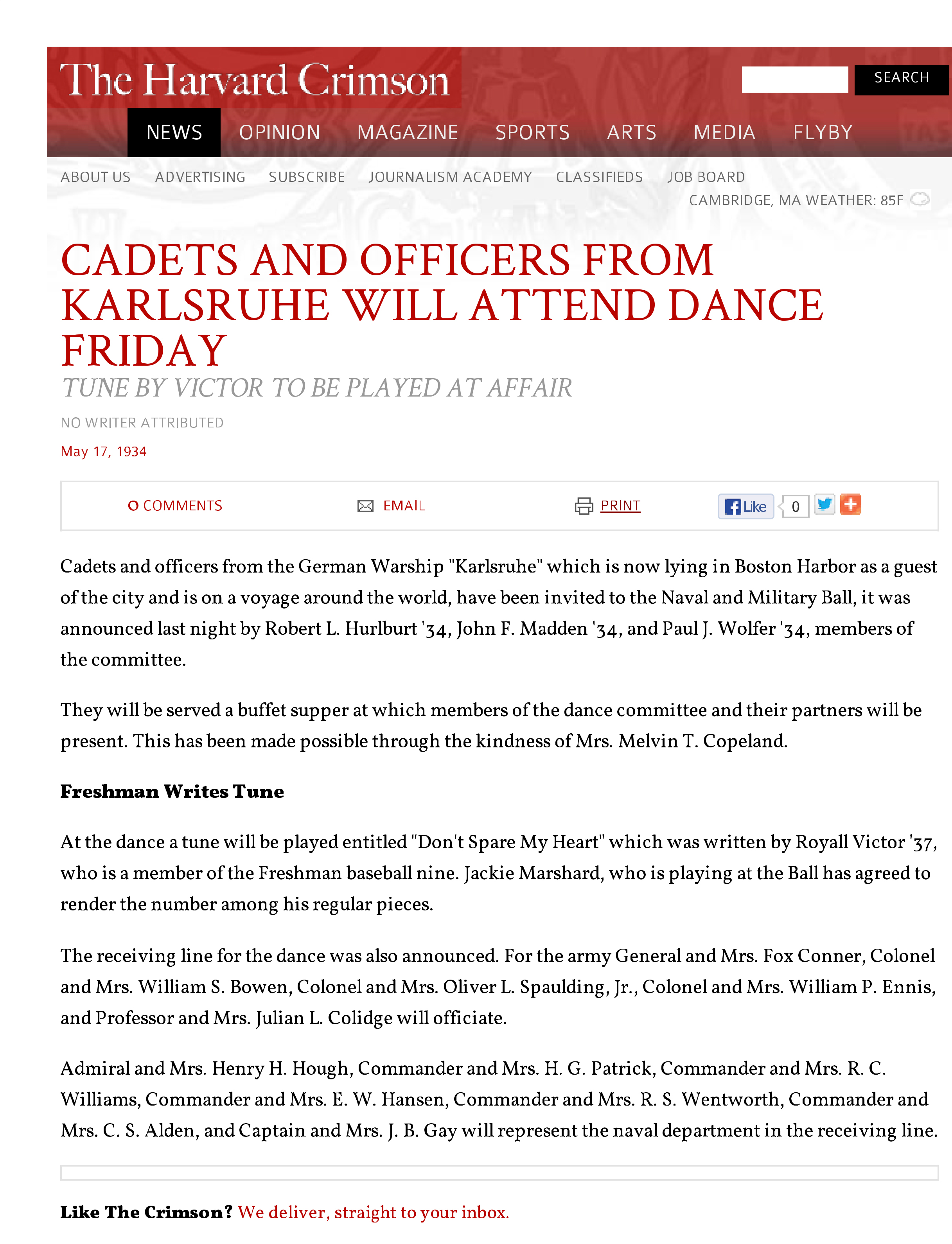 To find our way through that, perhaps we should listen in the text for guiding imperatives. There is one: Royall Victor’s tune, crying to Harvard and to the after time, “Don’t spare my heart.” Reading in a way that doesn’t spare the heart, then, we’ll begin to comprehend that Ernst Hanfstaengl’s family business was art publishing and the boat was pretty. It was to sail prettily on until April 9, 1940, when it was sunk during the invasion of Norway. Three hundred miles from Harvard, on the quiet Quaker campus of Swarthmore College, another young man felt that his heart had not been spared. When he tried to tell the editors of The Nation about his heart’s wound, however, they reacted only with bafflement. Baffled by others in the same way, they asked their readers on December 27, 1933, for help. 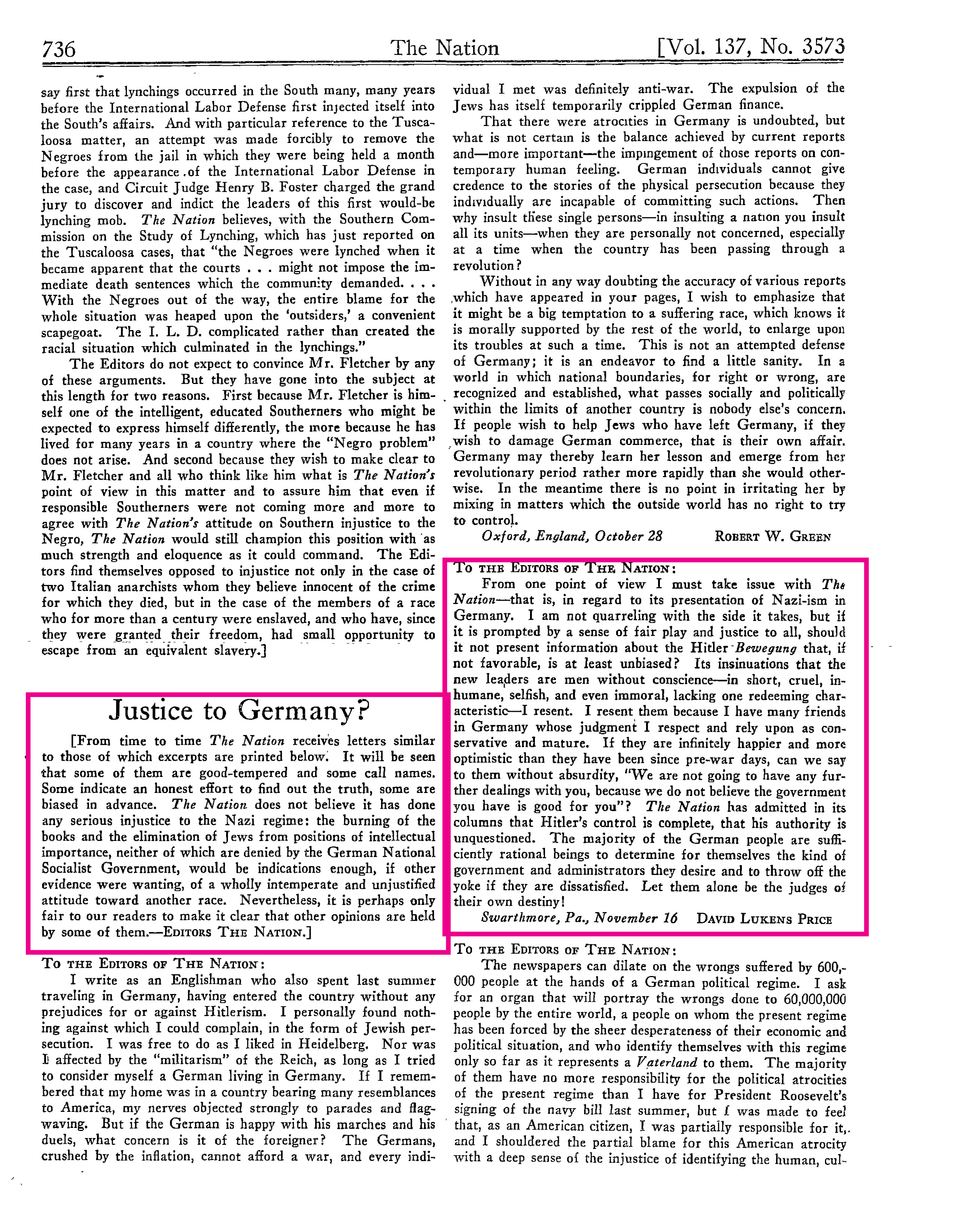 Eighty years later, the bafflement seems to have changed into a problem in the definition of terms. Because history’s lexicon in 2013 probably would define the Third Reich as indeed a regime of “men without conscience — in short, cruel, inhumane, selfish, and even immoral, lacking one redeeming characteristic,” speakers of a 2013 dialect of English will have difficulty communicating a sense of what David Lukens Price was trying to communicate in the vocabulary of 1933, before words like “cruel” had become encrusted with their post-1933 senses. And what makes our attempt to read the simple dead language of the past more difficult, not less, is that we actually have a single hint as to who David Lukens Price, speaker of a language once living but now dead, once seemed to be.

In Delaware County, Pennsylvania, we might be able to visit the courthouse and learn more. Anywhere outside Delaware County, however, the little that seems to be known of the history of David Lukens Price is that he was born into a Quaker family on October 27, 1908, graduated from Swarthmore High School, and continued living at home while he attended Swarthmore College, from which he graduated in 1932. The date at the foot of his letter to The Nation says he was still in the borough three semesters later. Literarily, that seems to be it, at least outside Delaware County. If he ever again wrote a word for the record of history, I haven’t found it. His obituary in the Delaware County Times for September 28, 1974, p. 4, says only that his last job was in Puerto Rico, as an area representative for a textbook publisher. No wife or children are mentioned. At the time of his death, the sole hint of what he might have been as a living man was a testimony more than forty years old. It had come whispering through a pair of verbal events separated by a year in the early 1930s, and it was named Halcyon.

Halcyon was the yearbook of Swarthmore College. The 1932 edition displays a small picture of  the older than average senior David Lukens Price, with his local address and a list of the student organizations to which he belonged, notably German Club I, II, III, IV. But the yearbook during those years was a project of the junior class, and on the Price page in the 1931 edition somebody has tried hard to say something nice about junior Dave.

In Pennsylvania newspaper archives from the 1960s, a Charles E. Pugh shows up here and there, typically delivering a speech in his capacity as head of the Pennsylvania chapter of the American Automobile Association. I don’t know whether that man is the continuation through time of the cheerful frat boy in the right column above, but the fit would be seamless. In comparison . . .

In comparison, oh poor Dave. No wonder he wrote the word “destiny!” with an exclamation mark. In his head he had a picture of a girl (or boy) named Germany, and he liked to think that if he could just sing beautifully enough she (or he) would notice him. After all, the only substantive difference between Dave the musician and Ernst the musician lay in their venues of performance. In Cambridge and Berlin, members of the audience would rise inspired from their seats, go forth, and christen cruisers. From the air over Swarthmore, on the other hand, the sounds of the ocean were absent. Unable to send men forth, unable to make them join and love the songs he heard in his head, Dave could only go silent. On their yearbook page, Halcyon’s words about him bring forth no echo.

I also discuss the page from The Nation at http://jonathan-morse.blogspot.com/2010/04/how-not-to-write-while-incredulous.html. A critical history of policies toward Nazi Germany on American campuses in the 1930s is Stephen H. Norwood’s The Third Reich in the Ivory Tower: Complicity and Conflict on American Campuses (Cambridge University Press, 2009). David Lukens Price’s birth in Palymra, NJ, the son of Charles Evans Price and Gertrude Lukens Price, is recorded in the Friends’ Intelligencer, vol. 65, p. 686 (Philadelphia: Friends’ Intelligencer Association, 1908). His father’s obituary in the Delaware County Times, 30 January  1956, p. 54, is headed “Charles Price, Football Official” and says, “He played a year of football at Swarthmore College at the turn of the century.”