From a distance, the Tumblr of somebody who claimed to be following my photoblog looked typical of Tumblr’s teen-girl genre: a digital collage of fashion shots and perky notes, all against a pastel background. The images within the frame, likewise, communicated only normal feminine narcissism. Think of yourself when you look at me, said every picture. Think of yourself as if you were me, dancing with yourself in every step you take. Be aware at the ending of every nerve that your living body and the beauty of the clothes it wears are extensions of each other, each making its other half complete.

But within the clothes, briefly illuminated by the studio lights but unreadable, was a corpus of body language that left me unable to understand my own word for “myself.” I can at least try to imagine what it would be to be, say, George Eliot, but that’s because I have some idea of how I might write a caption for a steel engraving of George Eliot. But about the girls in these digital photographs, whatever I might have said would have been swallowed up and silenced by an incomprehensible something extended along the zone where clothes touch the surface of the body. Looking, unable to follow my vanished thought into the zone, I couldn’t understand what these pictures were communicating. None of the young women they depicted could have weighed more than eighty pounds, but affixed to the front of every skull was what Blake called the lineaments of gratified desire. Like so many Emily Dickinsons, these girls were sated with their hunger. Next to a photograph of one of them a little text block praised the beauty of legs that don’t touch but separately stick straight down from opposing corners of the pelvis. For legs like those, image’s creative force had brought the dead metaphor “leg of a chair” back to life. It was now a poem once again, albeit a poem that couldn’t communicate in any language except mute gesture. Reconceived within the zone of silence as an idea of unupholstered furniture, the skeletons of busy young Dickinsons were now filling with animated silence a fantasy picture as beautifully real as any by Blake or Bosch or Grünewald. All there was there was silence, and words can’t move through a vacuum.

Of course I understood, looking, that the picture’s silent intimations were merely results of a strategy. The life I seemed to sense within the glow coming from my monitor wasn’t the biology of any woman’s body; it was a consciously created illusion originating in a business plan written out in words. Every anorexic fashion shot in this Tumblr was captioned with a link (in words) to an advertisement (in words) for a weight-loss product. In my own unaided words, I can understand that the images which initiate and record this communication actually depict a mass murder inflicted by monetization of the body. But the images, having once been created, are now independent both of their creators’ motives and of their consumers’ morals. Unthinkable on any terms but their own, proof against the legal language of the Food and Drug Administration, they now obey only the laws of art. A lipstick wielded by Ayn Rand has scored through my naïve word “actually” and transformed the images on my monitor into works of disinterested beauty, to be bought and sold sous rature alongside Damien Hirst’s works of decorated carrion. All that is solid melts into air, as an old book once put it.

As she melts away, then, the girl in the picture approaches ever closer to a mode of being that’s purely transactional, like money. She becomes all medium: a psychic agency existing only to mediate a physical transfer of currencies from one wallet to another. Touching our own wallets in homage as we look into a monitor filled with beautiful intimations of the transaction, we see each human model’s depicted motion change first to a depicted idea of motion, then change again (as the process of abstraction goes to completion) to an idea of stillness, then cease changing in a final dark stillness beyond idea. Finally there is no self left to dance with or be the dance. Wealth in its final equilibrium, with all the purchaser’s money transferred to the source of the image and the purchaser herself erased from the account, is a half-rhyme for death.

And then it has happened, just as Barthesian theory predicts: a body has been been transformed from the living to the photographed.

I’ll be traveling to Port Said at the beginning of next week, to see my mother for three hours once again when her ship [carrying her from Germany to exile in Australia] puts into harbor there: this is likely to be our last meeting by human reckoning. I’ll be writing much more soon. I will certainly make use of any opportunity I might somehow, somewhere, come across for you. I am asking myself whether you shouldn’t try to get into the U.S.A. while you still can, and whether that wouldn’t be better for you than anything else. (251)

September 25, 1942: snow falls in Iowa and Illinois, USA. For the weather bureau in Des Moines this is the first September snowfall on record, and elsewhere in the state the football game between Garner and Buffalo Center has to be called after wet, wind-blown snow breaks seven lights on the field. On a train, the conductor and brakeman are impressed enough to make a note. In chalk, one of them writes “1′ / of Snow 9-25 5 PM” on one of the rafters that support the roof of his caboose. The words will still be there four months later, when the photographer Jack Delano records a moment in the history of the caboose for the Office of War Information. 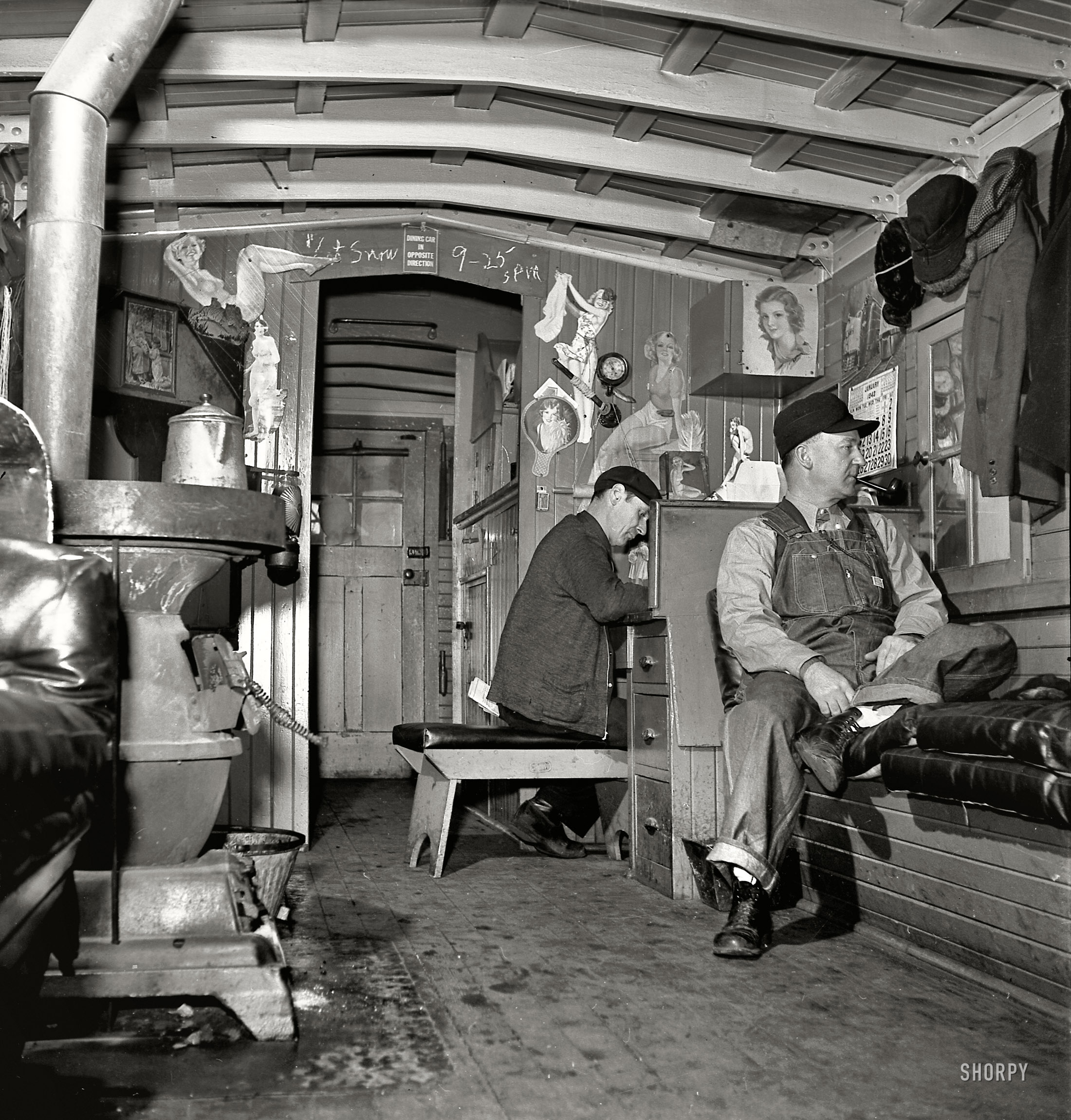 To posterity, Delano will later explain: “Freight train operations on the Chicago and Northwestern Railroad between Chicago and Clinton, Iowa. The caboose is the conductor’s second home. He always uses the same one and many conductors cook and sleep there while waiting for trains to take back from division points.” After Delano, other viewers of the image will follow his narrative to its completion. To the comment stream where I found the image on Shorpy.com, one will contribute the weather report for September 25, 1942, while others will observe the splatters of tobacco juice on the floorboards and the different sorts of girls’ pictures on the bulkheads. Those data are precious to the commentators because they are history, because there are no cabooses now. The commentators explain: brakemen are no longer needed to watch for fires under the train because wheel bearings are no longer packed with oil-soaked rags; and switches now are thrown electrically under radio control, not manually by a brakeman who has climbed down from a caboose; and air pressure in the train’s brake lines is now read and communicated to the engineer by electronic sensors, not by a brakeman swinging a lantern.

But the brakeman in Jack Delano’s picture doesn’t know. For the camera he is wearing new overalls and a new shirt and smoking a pipe, as many American men did in January 1943, the month that shows on the calendar beside his head. Photography has done its magic again; looking, we believe the moment can be 1943 forever, with the pipe scenting the air along with coal smoke from the iron stove. And above the conductor’s head, as he sits at his desk, is the punctum of the men’s presence in the moment: inconspicuous on the bulkhead behind the girl prettily standing on tiptoe to hang laundry on a line the way American women did in 1943, an air pressure gauge. Until that indicated a certain number to a brakeman, a train in 1943 couldn’t move. But of course there’s nothing left of any of this information, now, except a still photographic image bearing pictures of a conductor and a brakeman and some scribbled words and some pretty girls who are less likely than the two men in their little portable home to have gone invisible to memory.

As to Gershom Scholem’s mother, she disappears from the text of The Correspondence of Walter Benjamin and Gershom Scholem after the sentence I’ve quoted above. The correspondence itself ends fourteen pages later. We know how it turned out. In an appendix, Scholem notes that cemetery attendants in Port Bou “who, in consideration of the number of inquiries, wanted to assure themselves of a tip” (268) used to show visitors an enclosed plot of ground and tell them it was Benjamin’s grave. But it wasn’t a grave.

Here below are some more plats of homes from which Walter Benjamin was absented. And Susan Schultz, whose mother now listens as an attendant in what’s called a home reads to her from The Little Prince, thinks of exile and a lost kingdom and writes:

There was a happy ending, at least for a time. Using dowsing sticks, they found a spot, unmarked by stone or twig, dug until they reached a vein of water. They drank from the same bucket, sharing more than the cold water. But then the daughters came, and their retinues, and their resentments, even the youngest one’s recovered love. There were swords and bitter words, nothing water could wash away, not yet. 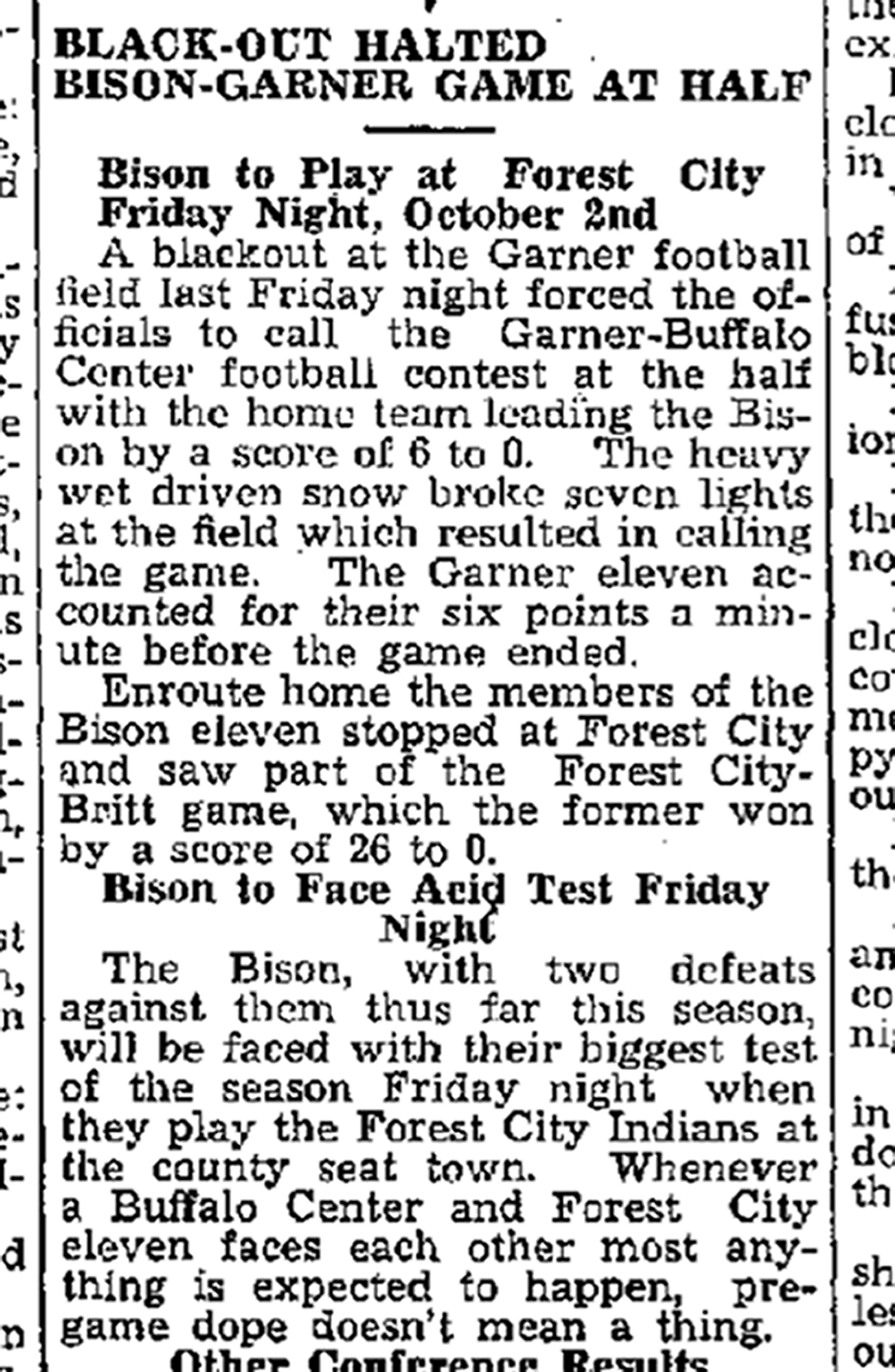 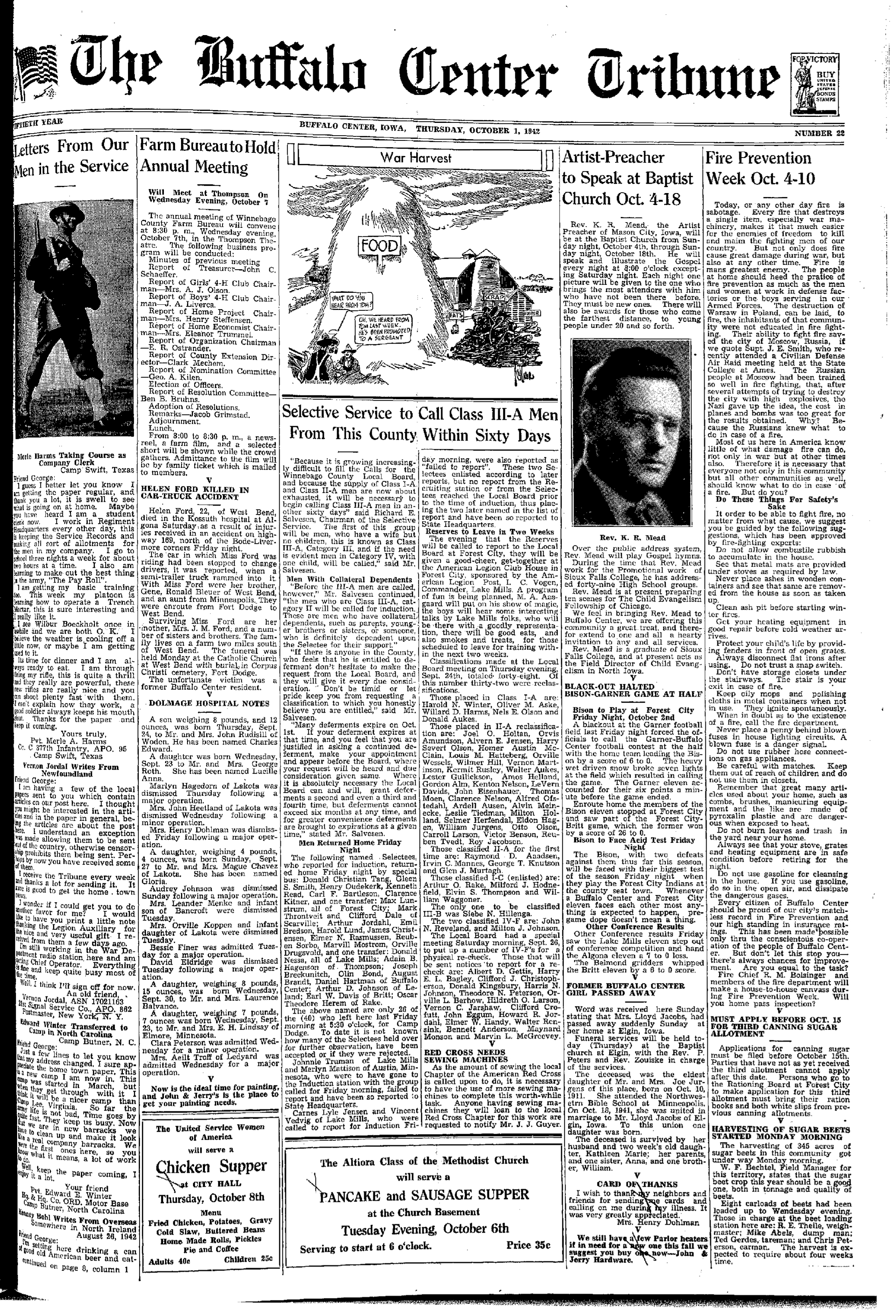 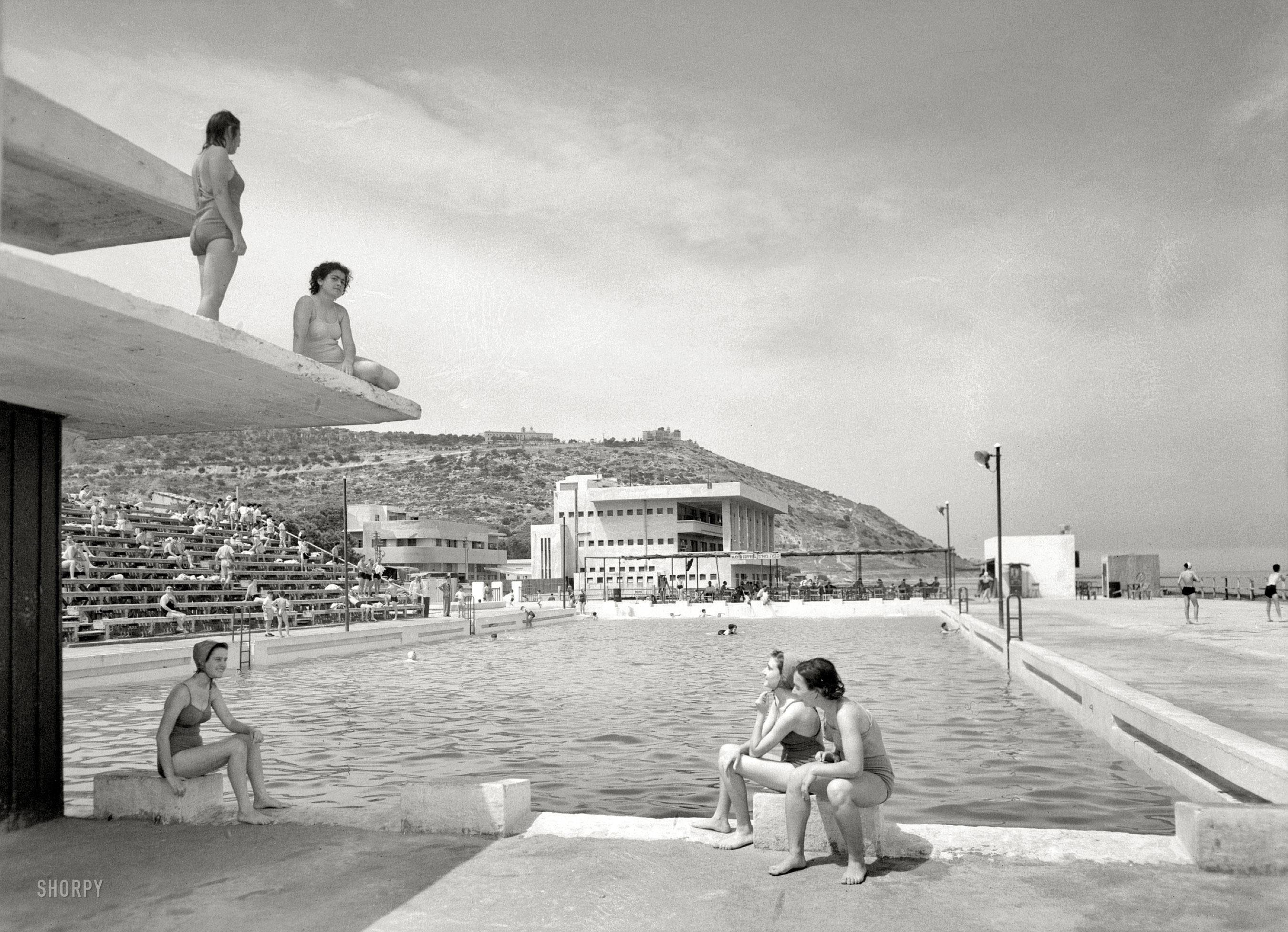