In the days of Betty Friedan, an object of feminist scorn was Phyllis McGinley, poet of suburban domesticity. The hate has gone away now, if only because the immensely successful writer of the middle twentieth century is now unread. A fast history of her representative evanishment from memory, if you need one, is Ginia Bellafante’s “Suburban Rapture,” New York Times, December 24, 2008.

Acting on the need isn’t mandatory, though. The historical point about Phyllis really makes itself. It has a completely self-evident background, for example, here on these four pages from The New Yorker. “War war war! Fiddle dee dee!” Miss Scarlett had protested a short time before they appeared, but by now the date on the cover had advanced to October 25, 1941. The war had been on for more than two years as of then, and Pearl Harbor was less than two months in the fully foreseeable future. So no, say the images on the pages to you, as of 1941 and also as of ever after: don’t ignore and don’t evade. Fiddle dee dee won’t work, and now you are obliged to know that it never did. You always had to look. 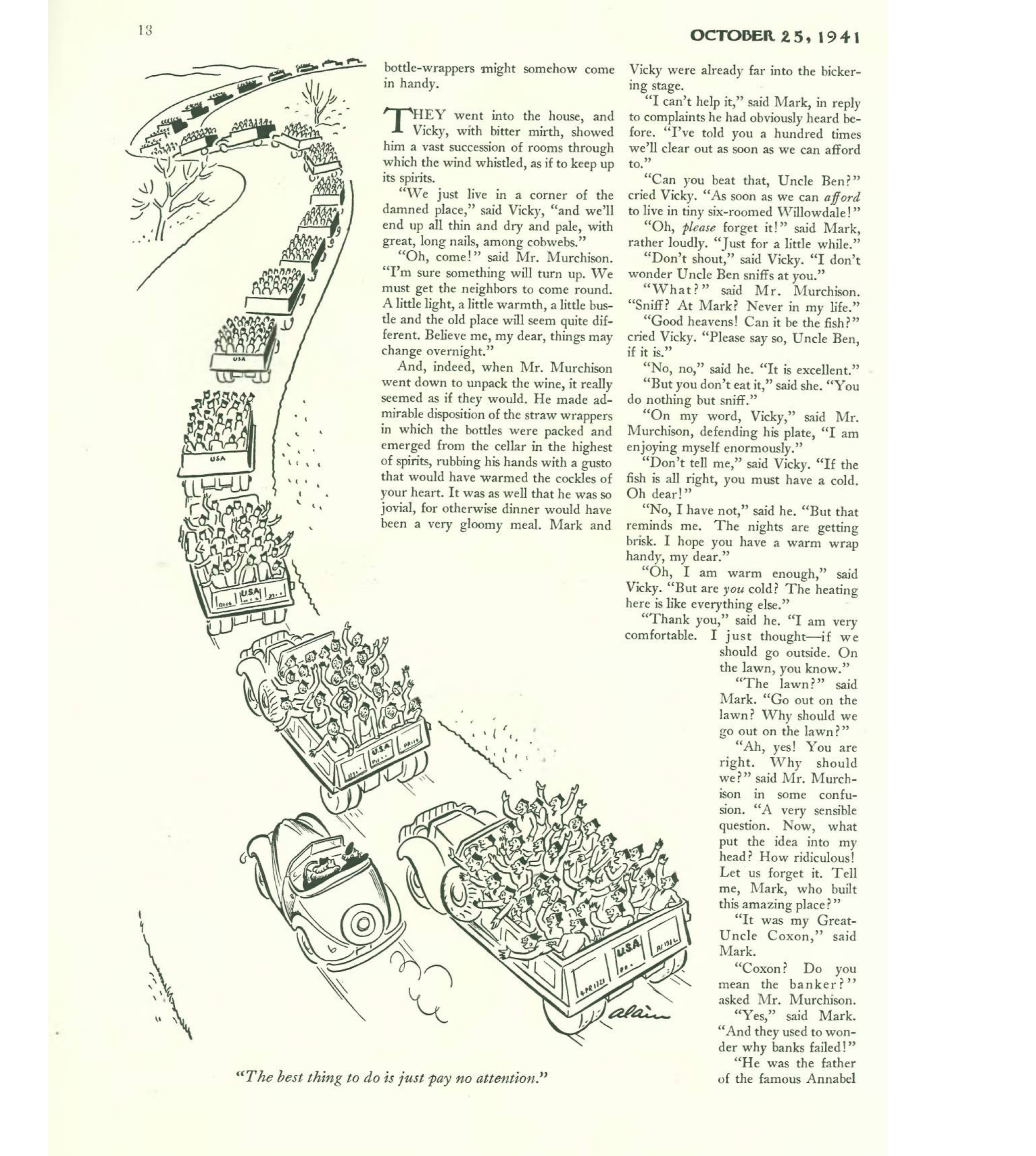 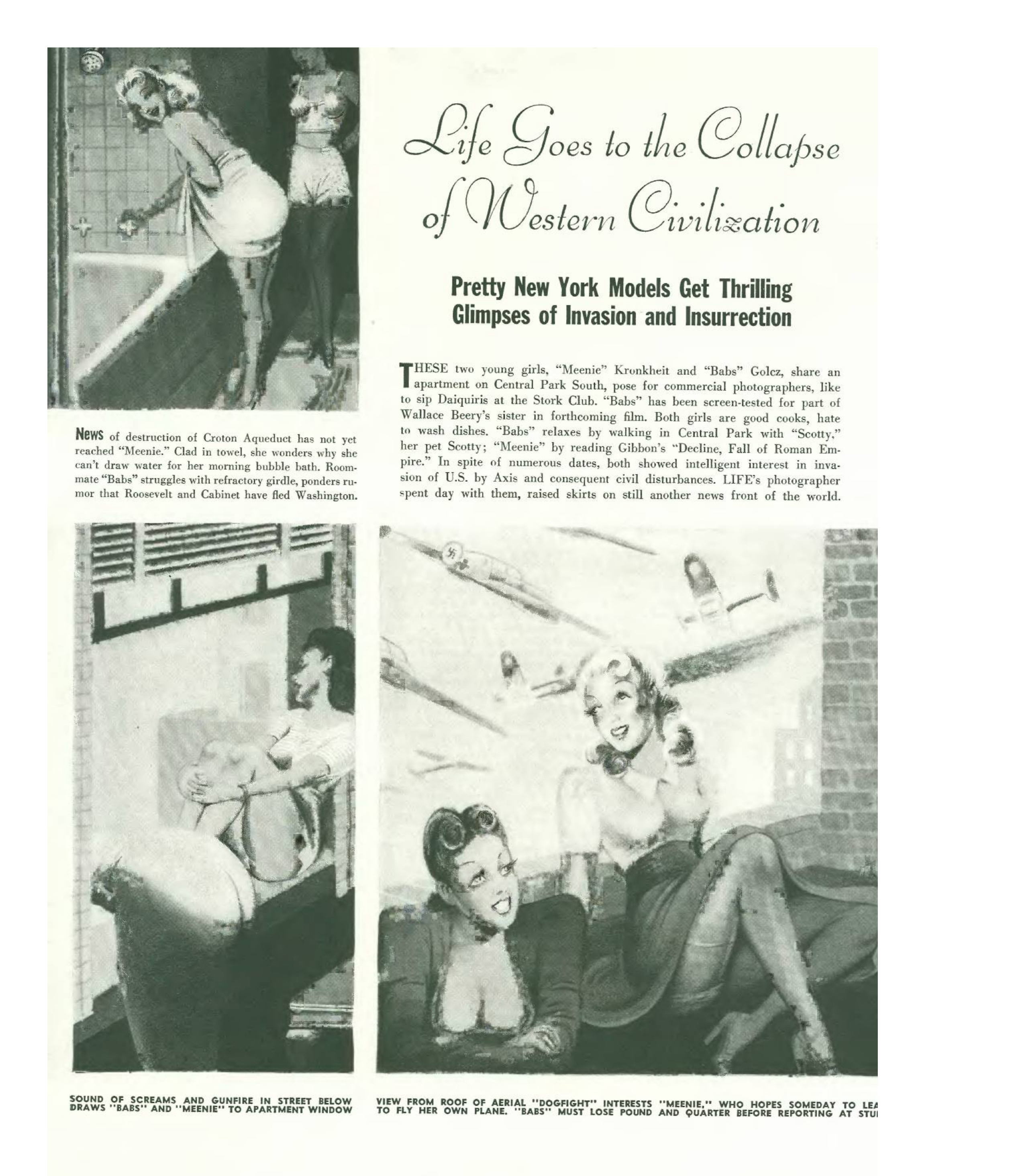 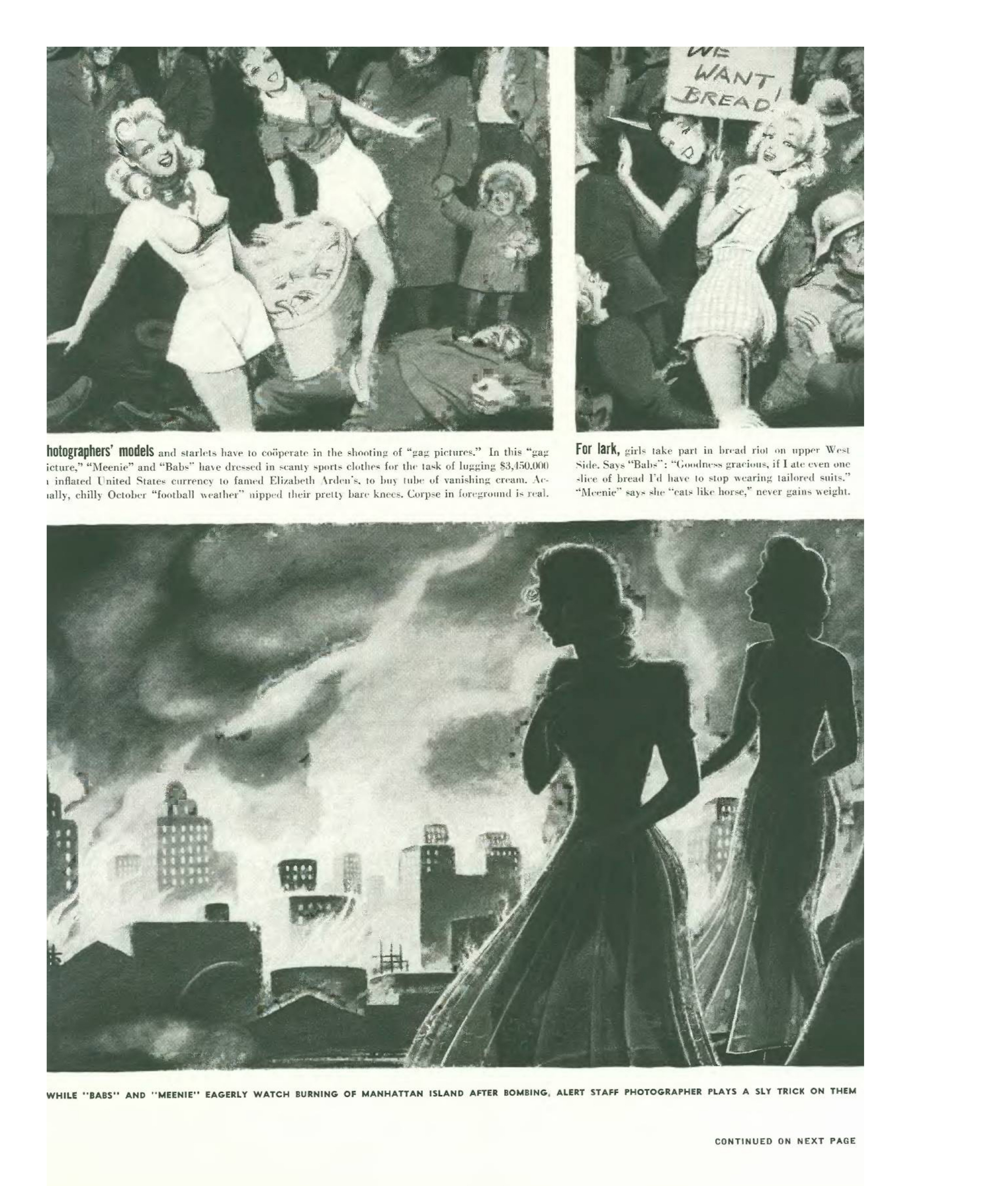 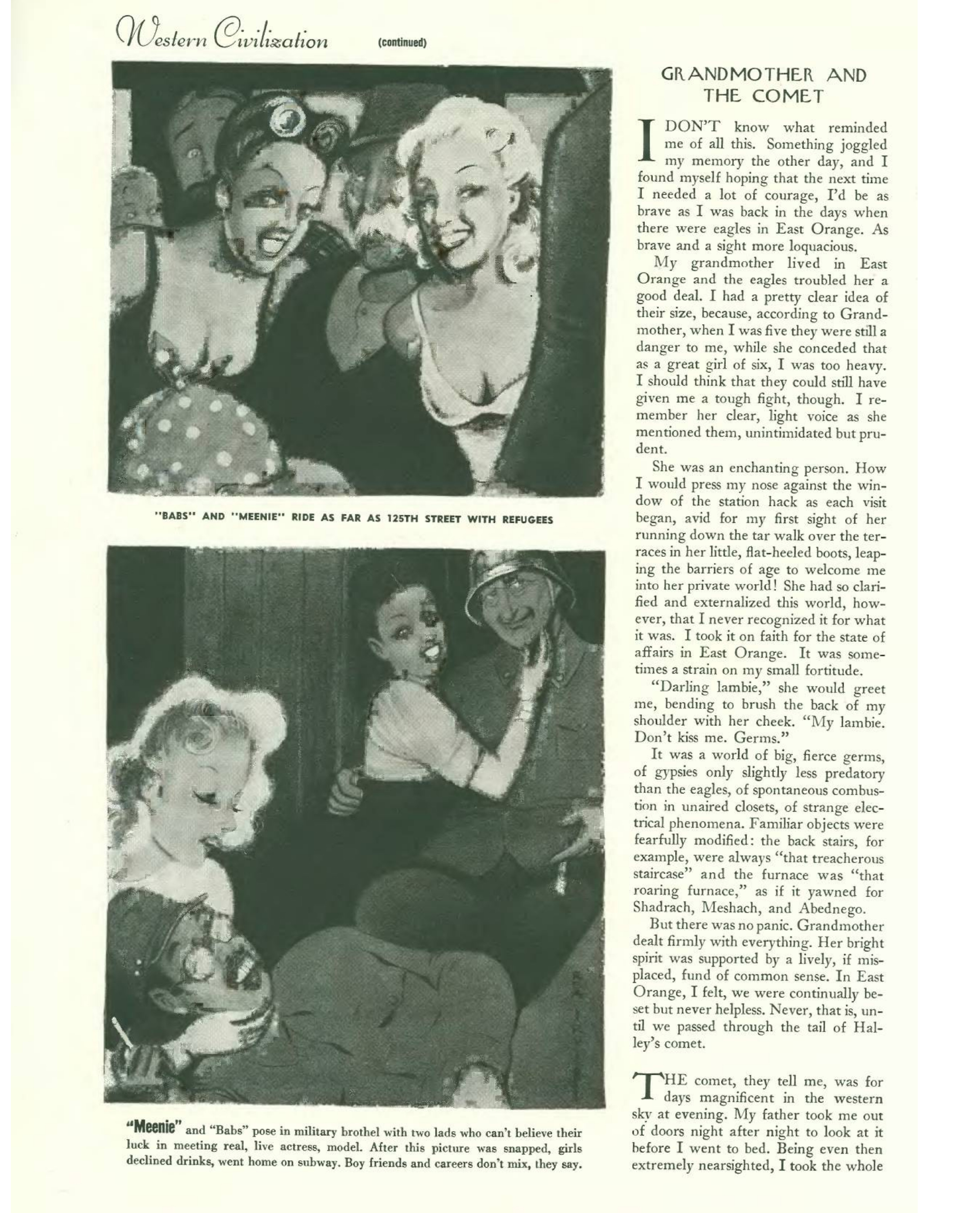 And you did look at this corpus. The prose is showing its age, but ah, the pictures . . .

But the consecutive corpus is actually five pages long, and you looked only at pages 1, 3, 4 and 5. Except for the little dog-doodle by James Thurber, page 2 is read-only, and one part of the reading it imposes on you is not in prose. There it is, below the dog: the poem by Phyllis McGinley. 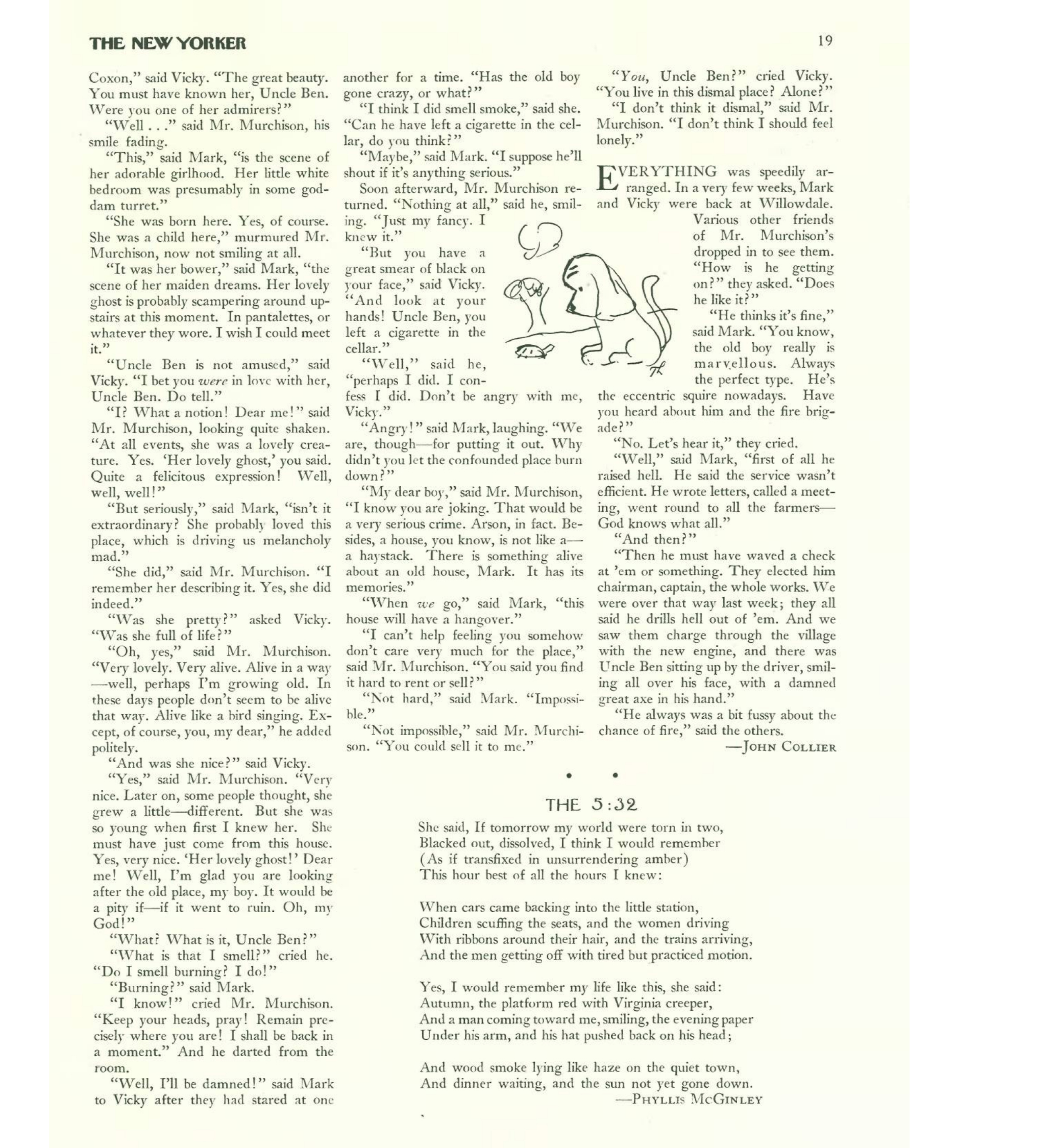 See how The New Yorker’s typographers have helped you identify it the way a timetable identifies a train. Yes: Phyllis McGinley, poet of America’s northeastern burbs, classified this section of her lexicon into an English or Shakespearean sonnet, a consist actually devised by Surrey. That arrangement of words is a form, and it belongs to literature. After the war, when Americans who had survived the war needed to forget, literature went looking within its forms and found there a Phyllis technique for forgetting the whole by remembering parts. After a while, when the work of forgetting was complete, that phase in the history of form could be broken back down to the parts: octave and sestet, salvageable steam engine and children. Phyllis McGinley herself (1905-1978) could be trucked to the antique store, and while we’re at it ubi sunt the Spasmodic poets and Mrs. Humphry Ward?

But affection isn’t mortal on schedule. 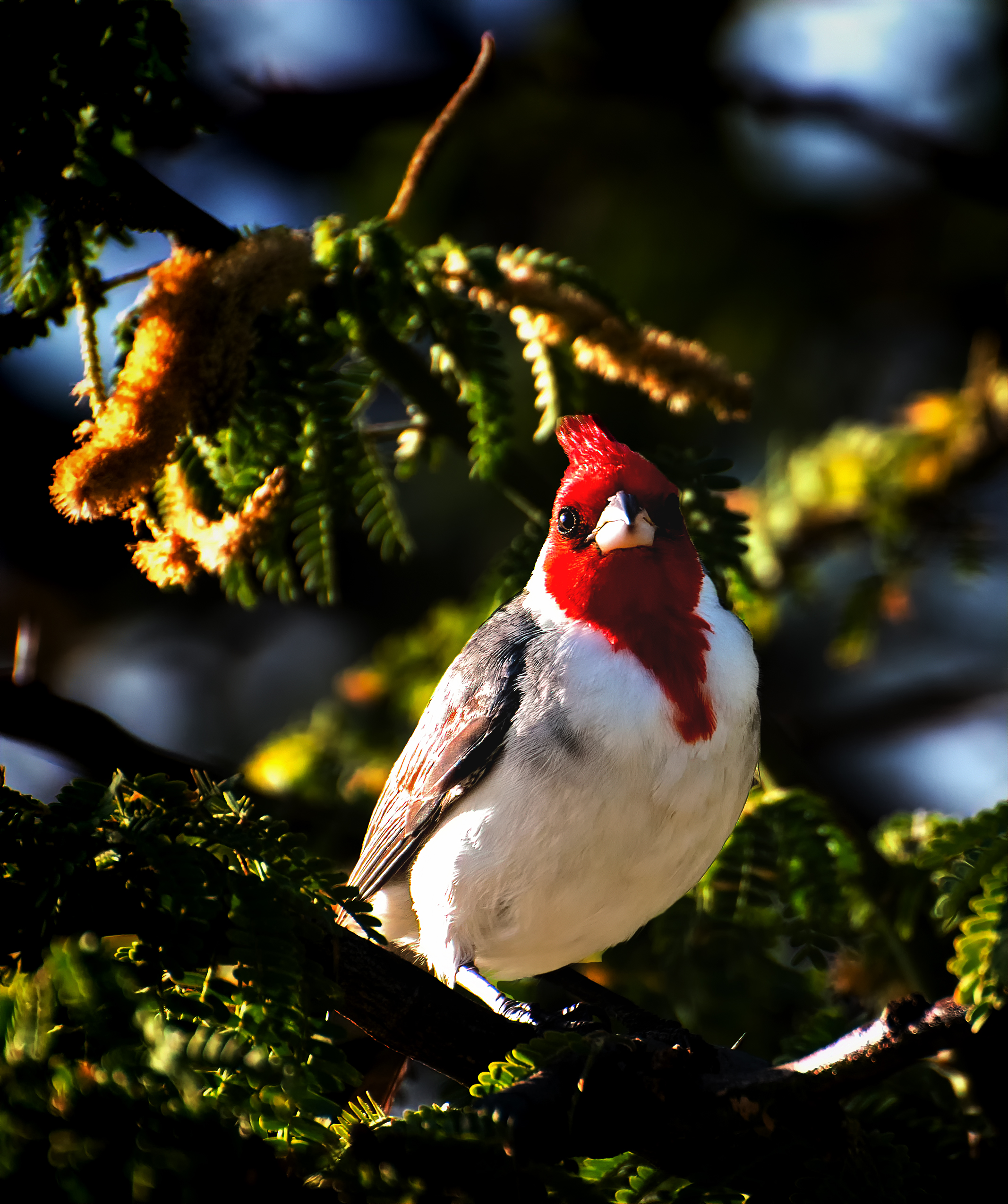 Look at this Phyllis. If the looking gets you to think, as unerringly as birdsong, some such word as “face,” perhaps the association has evoked a notion of being loved face to face, regardless of what you know better. So a possibility remains that in some nest somewhere there always will be a Phyllis, regardless of the But you know better words that persist in saying things like “pathetic fallacy.” Ahistorically, just as a matter of biological necessity, a Phyllis nest may still be building somewhere for us, regardless of who the Phyllis of the moment may be.