The old noun is enameled iron. The fabric bears the impression of another old noun, mangle. The glasses’ thin delicate lenses are actually made of glass. The wide eyes and smiling face are turned full on toward an about-to-be-blinding light. 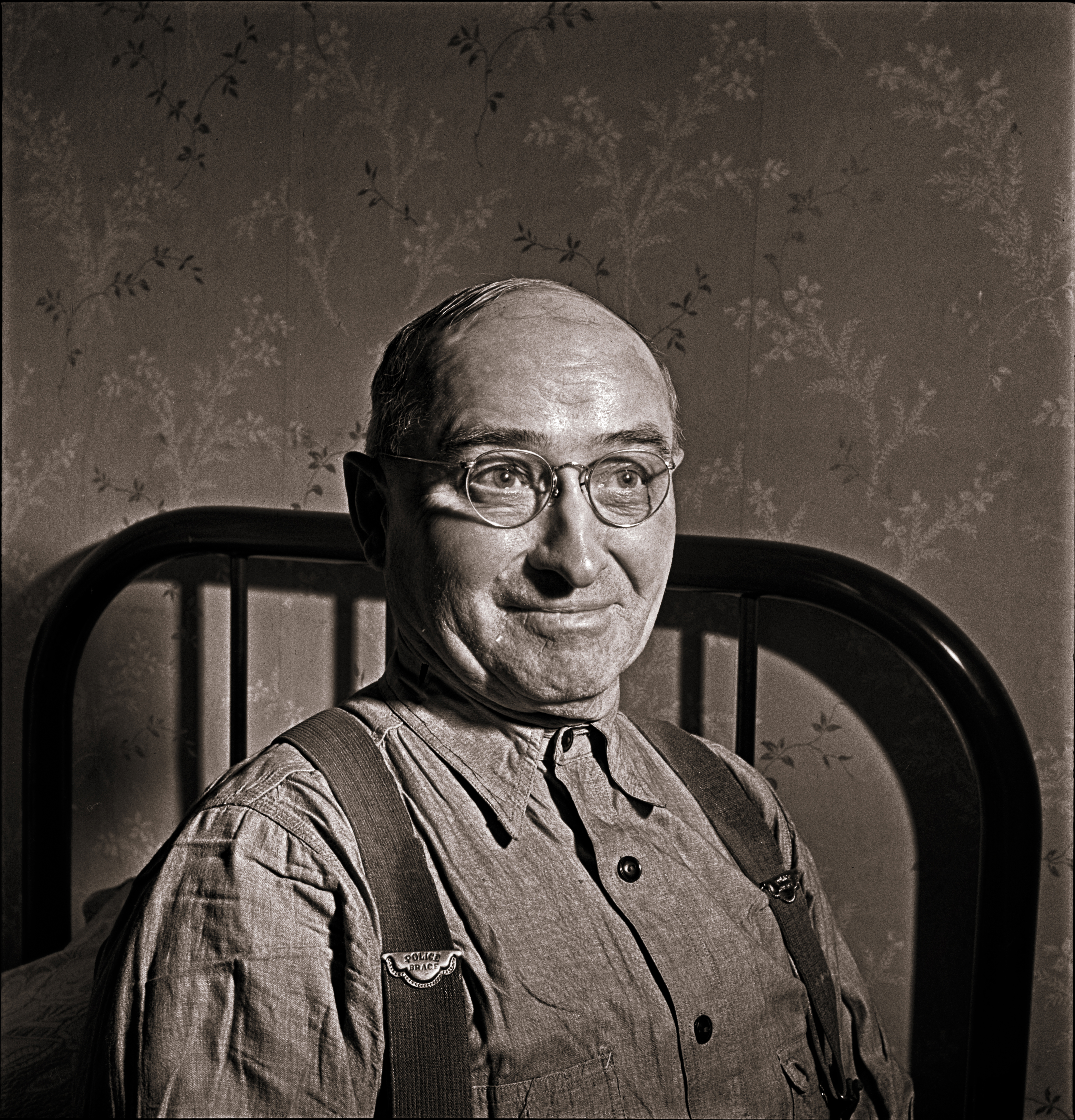 As things lose their immediacy of reference and become mere historical artifacts, the names they once had (“mangle”; “bedstead”) become hard, ironic, and unforgiving. The trusting smile that the picture shines toward us isn’t like the smile we return, because the man in the picture isn’t thinking, “Little do I know.” He is innocent. If he should say “bedstead,” the sound in his smiling mouth would lack the overtones demanded by our third-person knowingness. The reproduction would be low-fidelity, as if it had been played by a Victrola invisible within the image frame. Only we outside the image frame have been equipped by the passage of time post-flash to hear ourselves wanting to believe, “Little does he know.”

In the flash, “Little does he know” underwent a change of tense to “Little did he know” and the image acquired a caption. In the language of the past it can now say, for instance, “Bedstead.” Post-flash, we translate such words into bedtime stories that we force-read to ourselves, making believe that seeing what no longer exists (for an illuminated moment, a bedstead) can somehow come to mean understanding what no longer exists (forever, a bedstead). But the translation is a language we don’t understand ourselves. Now that the bedstead’s touchable knowable actual iron has passed out of reach in a flash, little can we know. 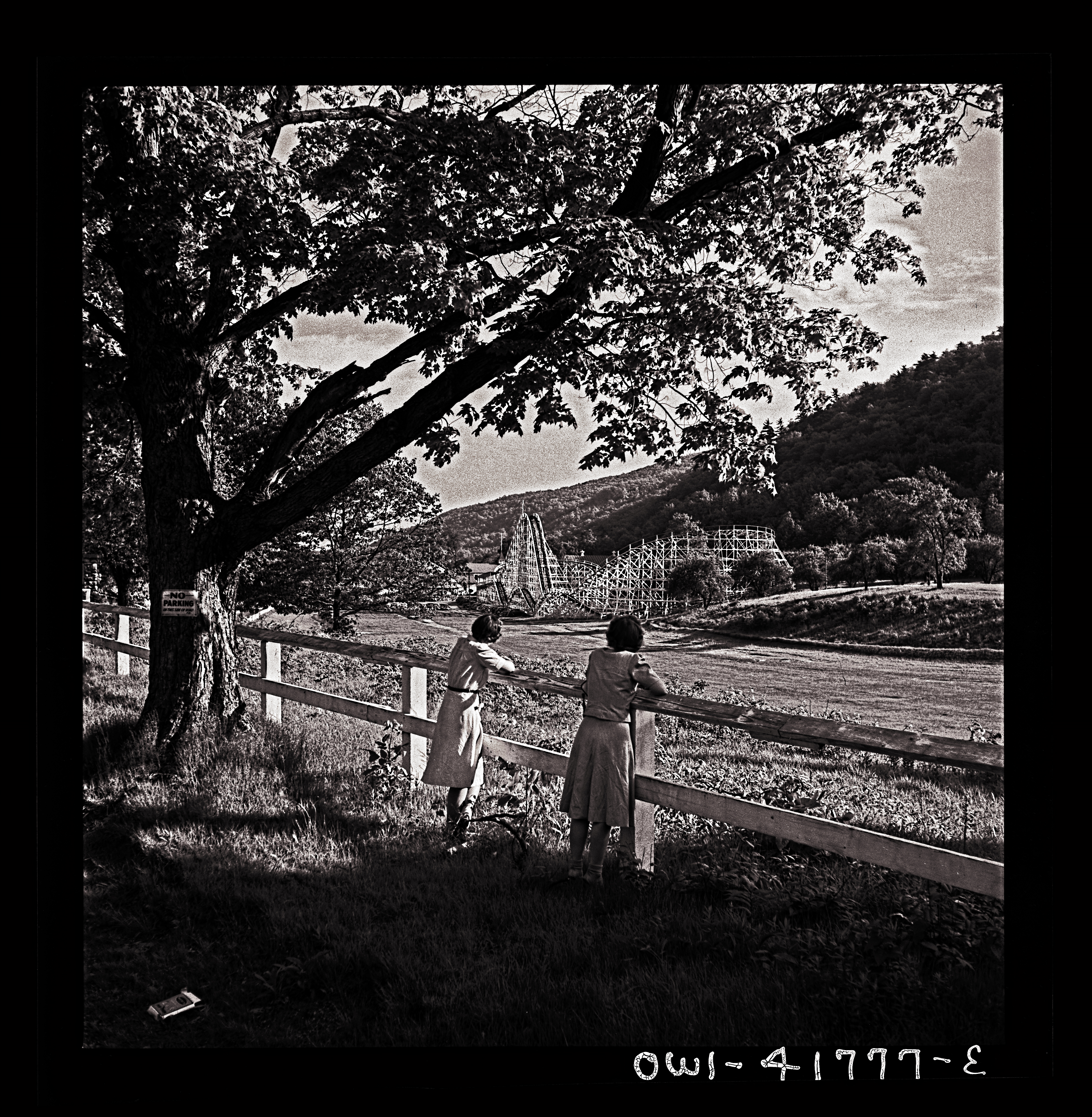 Source: Fenno Jacobs, “Amusement Park,” part of a suite of photographs taken between May 23 and May 30, 1942, for the U.S. Office of War Information. The suite is collectively titled “Southington, Connecticut. An American town and its way of life.” Farm Security Administration / Office of War Information black and white negatives, Library of Congress, http://www.loc.gov/item/owi2001038690/PP/. Photoshopped.

In the dining room in the background, the curtain is lace and there’s a decorative candle on the sideboard. The basic architecture of the living room is decorated likewise with consoling little flourishes of beauty. The brickwork of the fireplace is set off by the walls’ rusticated plaster, the overstuffed chair displays three crocheted antimacassars, and on the mantel with the portrait and the two little china things there’s also a clock that reads 3:55.

Perhaps the photograph was taken on a weekend, or perhaps the man who is tuning the radio is retired. At any rate, he is home at that hour, and wearing bedroom slippers. At that hour, a time scheme of slippers and daytime radio communicates leisure, and the man’s smile communicates satisfaction with the scheme for the present and optimism for its future. 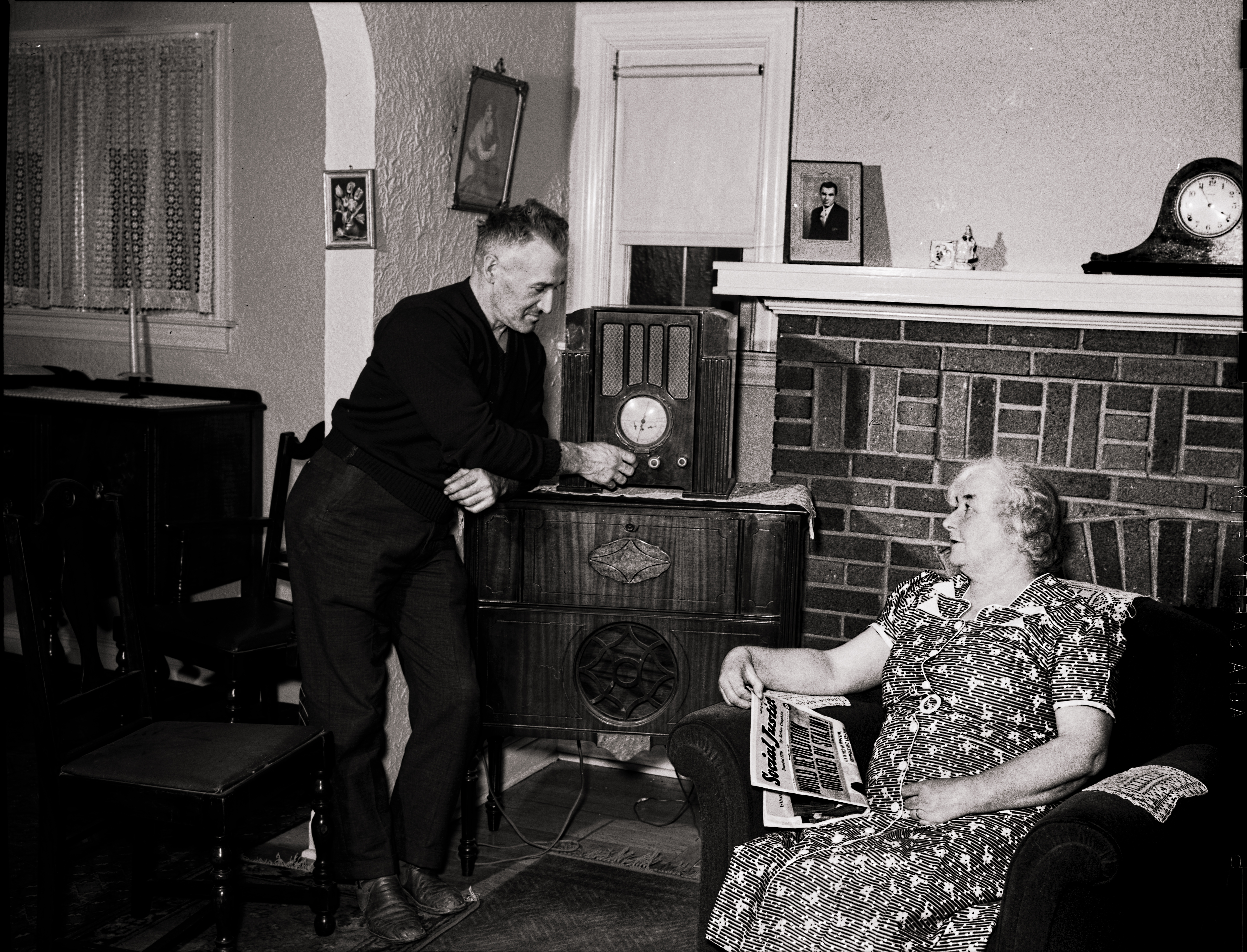 But the Library’s record somberly adds that this home was in Royal Oak, Michigan, during the 1930s. History knows now what that means: this is a picture of a family suffering. Royal Oak in the 1930s was the home parish of Charles E. Coughlin, a Jew-baiting priest whose nationally popular radio broadcasts grew steadily more Fascist in their sympathies until they were silenced by the Bishop of Detroit after the attack on Pearl Harbor, and in this photomemoir of the Royal Oak moment the nice grandmother in her comfortable chair is holding a copy of Father Coughlin’s newspaper Social Justice. Its headline is to be read only as a scream of distress.

It cries, WORLD REVOLUTION ORDERED BY STALIN! Furthermore, its sans-serif font on folded newsprint assures the old woman, as she lets its fall into her lap from an unsteady hand, that it speaks the truth. Especially, too, when it’s read in a house full of things, it reminds the old woman that she has much to lose if what it says is true — and it adds that what it says is true because it’s on newsprint, in sans-serif. Because she has bound up her life with sans-serif in a roomful of things, she must now remain in the room forever after, with all her unhappy valuables of polished wooden radio and sans-serif on newsprint. She can’t afford to leave. Having turned on the room’s radio and subscribed to the room’s newspaper, she has been deprived of the power to imagine being happy. In this room, ever after, there will be no more fiction.

The man has been reduced. When he lay down on a cot to read, everything was taken from him except a suit of underwear, for decency’s grudging sake, and the glasses that someone once bought for him, taught him to read through, and then forgot to take back. 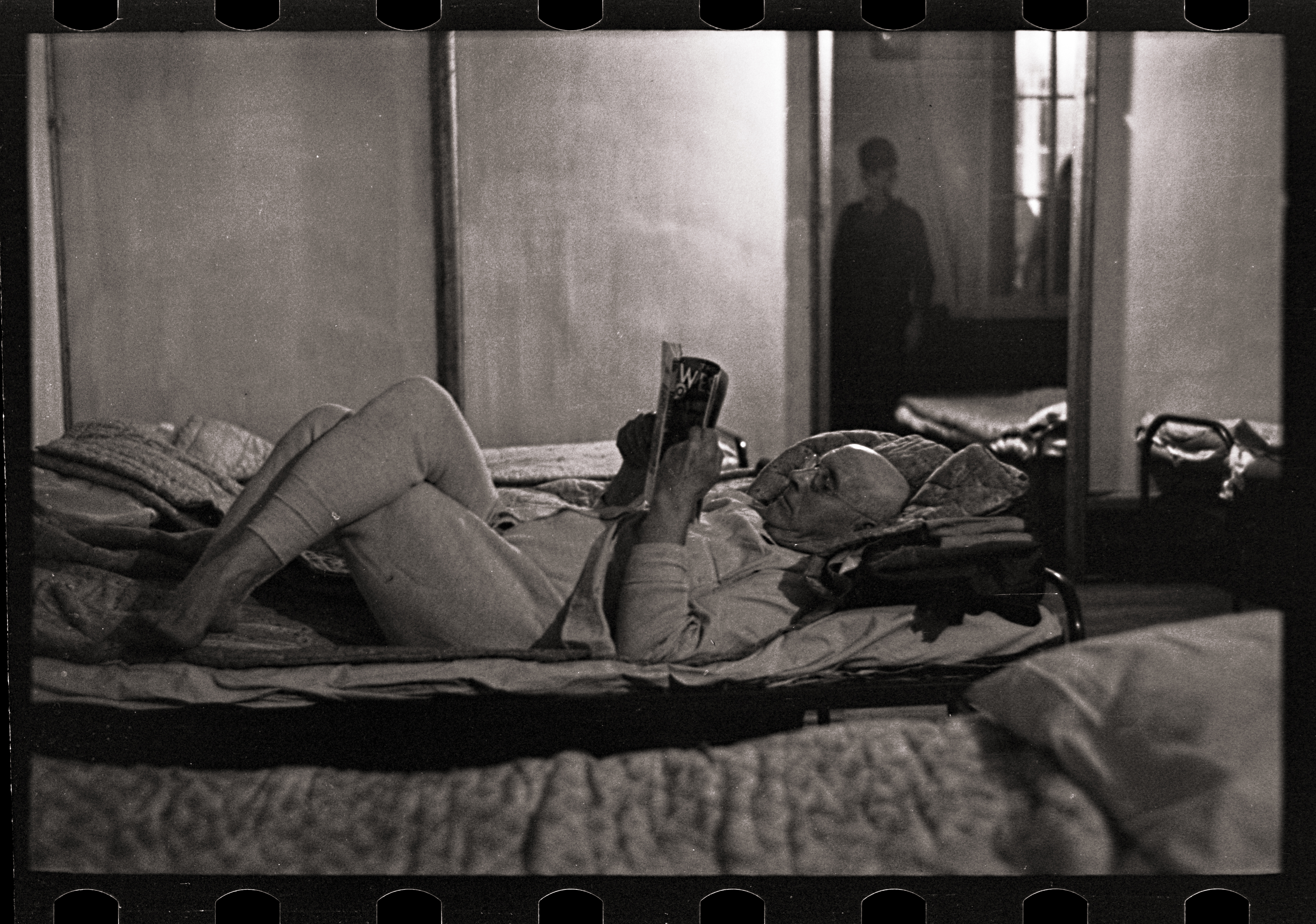 But I’d guess that the fragment of title readable on the cover of the man’s magazine is “The Western,” and its Old West typeface tells a story different from the sans-serif of Royal Oak. This story says: in Sioux City, Iowa, in an institution called the homeless men’s bureau, imagination lives and brings not happiness, surely, but at least oblivion. Held close to the underwear like an amulet, words spelled out in an Old West font fill their reader with the power to forget.

The other photograph, by Russell Lee, is one of a group taken for the United States Resettlement Administration in December 1936. Its Library of Congress title is “Man lying on bed reading magazine, homeless men’s bureau, Sioux City, Iowa.” http://www.loc.gov/pictures/item/fsa1997021496/PP/. Photoshopped.

What am I reading here? Some history. I can place the document in that genre because it explains and is explained by its date of composition: April 1942. Off the page, history has already taught me that April 1942 has something to do with the United States’ entry into World War II in December 1941, and I accordingly think I understand what the words on the page mean when they say: “Los Angeles, California. The evacuation of the Japanese-Americans from West Coast areas under U.S. Army war emergency order. Japanese-American children waiting for a train to take them and their parents to Owens Valley.”

That timestamped and circumstantial text isn’t only a history, of course. It’s also a literature. Shaped by narrative convention, it belongs to the literary genre of the caption — specifically, the caption to this photograph by Russell Lee in the Library of Congress’s Farm Security Administration / Office of War Information archive at http://www.loc.gov/pictures/item/fsa1998003537/PP/. Because a caption has an explanatory power over its attached image, its words make the image in some sort verbal. They make it tell a story. From this historical era, for example, there exist similar photographs taken in other theaters of World War II, and our reaction to any of them will be, so to speak, captional. If the caption tells us of a Japanese baby being evacuated from Los Angeles, we’ll react one way; if the caption tells us of a Chinese baby being evacuated from Nanking, we’ll react another. Likewise, as of August 2014 I think most of my academic colleagues would react with sympathy if a caption told them that the image were of a Palestinian baby, but with exasperation if an editor then corrected the caption’s adjective “Palestinian” to read “Israeli.”

It’s been a long time since a news photo could be thought of as intelligible on its own terms, of course.  A century ago, not long after Freud taught us how hard it is in principle to know what we’re seeing, Lev Kuleshov demonstrated that in practice we can’t even see the difference between a dead baby and a bowl of soup. In Kuleshov’s experiment, a movie clip — one clip, only — showed an actor going through the physical correlates of emotion. A montage of that clip with some ostensible stimuli of emotion then made clear that any imputed sense of emotion, of emotion about an ostensible stimulus,  was demonstrably nothing but an artifact of the montage effect. Juxtaposed with the image of the baby, the actor’s mobile features and heaving chest seemed to mean one thing; juxtaposed with the image of the soup, they seemed to mean something else. We might have thought they expressed feeling, but In themselves they were nothing but mobility and heaving. Whatever emotion we derived from them was an illusion.  We were misled by our expectation of a caption to read. But from the belated realization that Kuleshov’s tiny silent movie is captionless there follows a happy ending. To learn that one is free from captions is to learn to be free from other things as well.

Therefore, face to face with an image that has been captioned, I find myself wondering whether I can do something in the captional space above the border where the caption’s words begin. Wondering, I open Photoshop and set about trying to change the non-verbal part of this historical record. Timidly, at the start, I may tell myself and you that I’m only restoring the captioned image, only using modern narrative technique to put an illustrated story — a children’s book, a picture book! — back together.  But of course what Photoshop and I are doing to this ensemble of words and non-verbal forms isn’t merely a historiographic revision. Photoshop and I aren’t doing history now; we have subordinated ourselves to a corpus of aesthetic principles that have nothing to do with Los Angeles or trains or 1942. Our project has been taken over by art. So: 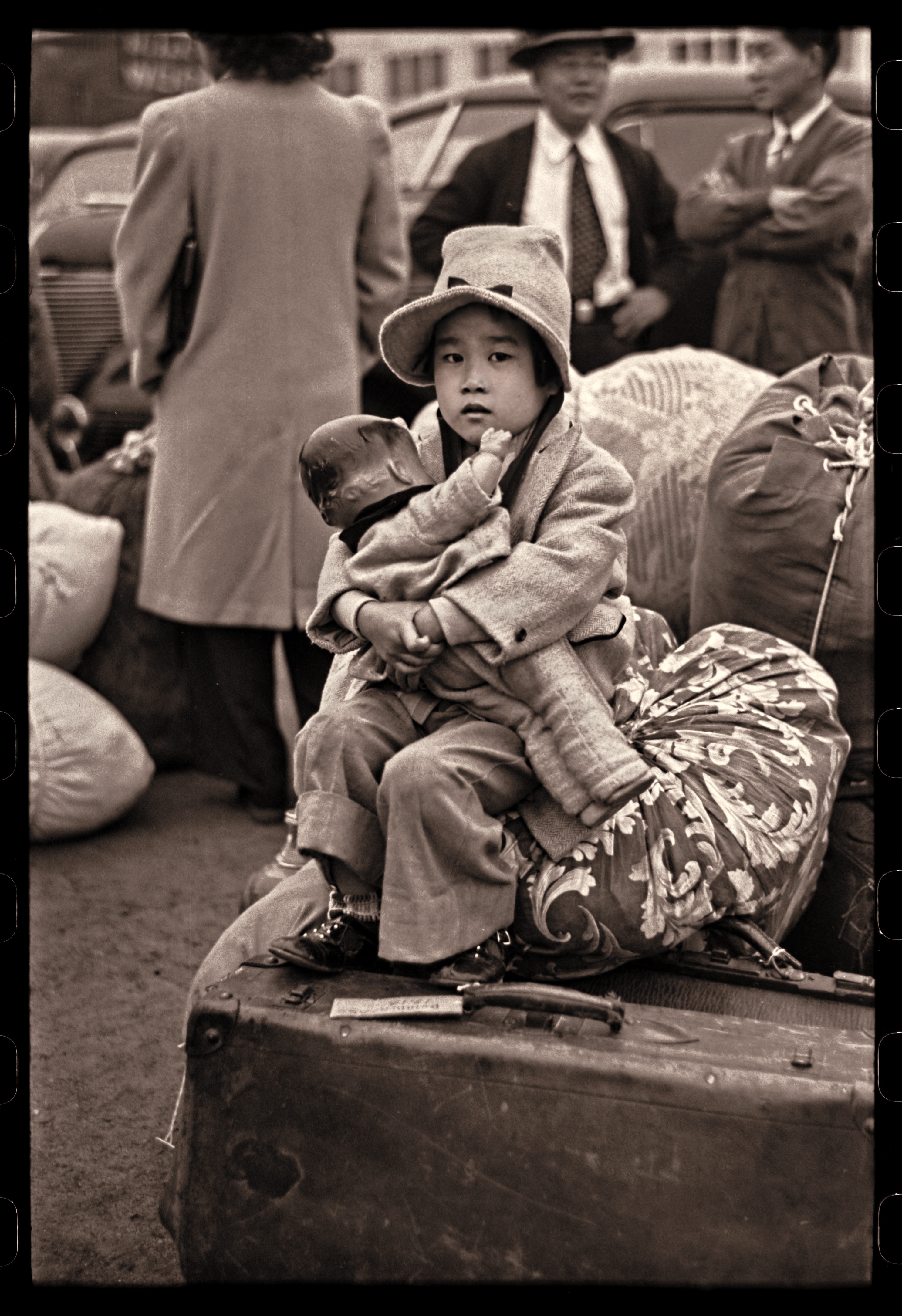 And you see: I have not merely restored the record or corrected it. I have (as editors used to say in the days of Thomas Bowdler, he of the verb bowdlerize) improved it. See how much more tragic than Russell Lee’s original my little girl is, hear how much more clearly we can say “Little does she know” about her! How satisfyingly pretty I have made this children’s story!

Because it’s open to the possibility of an aesthetic judgment like that one, my version of Russell Lee’s photograph is no longer quite a historical document. It can now be read without its caption, as if it were in the process of growing distant from the history of events. It’s no longer merely captional. If it isn’t yet art, it may at least be art history. Because the space around the little girl has now been filled with art, her mother has now been barred forever from entering the image frame to reroll her daughter’s cuff. Because art always has a completion function, the caption below this image has now been translated into a dead language and made emotionally unreadable on any terms but art’s.  The little girl’s picture can now say only the one thing art ever can say about itself: The End. Waiting for a train which can now never arrive to transport her out of the image, holding the doll which she now will never outgrow, the little girl has become an unravished bride of quietness.