In the course of the siege of Atlanta, the building has undergone some damage. Part of the fascia has become detached from the roof and two or three panes in the second-story windows appear to be broken. A Union corporal is sitting in front of the building, but his back is to the structure and he isn’t reading any of the words written there: neither “Lamp, Pine & Kerosene oils” nor “Auction & Negro Sales” nor “Queensware.” He isn’t looking at the pictures, either, but they’re up between the windows on the second floor: a couple of paintings in classical style. They may have been intended to make the term “Queensware” an emblem: a pictorial representation of an idea. Queensware, originally Queen’s Ware, was a cream-colored china which the classicizing Josiah Wedgwood created in 1765 for Queen Charlotte, the consort of George III. The next year, a Midlands newspaper announced, “Mr Josiah Wedgwood, of Burslem, has had the honour of being appointed Potter to Her Majesty.” In this building, the business transacted with only a conventional minimum of decoration on the first floor made possible the more luxuriant typeface on the second, and the chaste urns emblematizing a classical ideal of beauty.

It’s the word “urn” that throws sweet pathos over Herrick’s “Upon Prue, His Maid.”

In this little urn is laid
Prudence Baldwin, late my maid,
From whose happy spark here let
Spring the purple violet.

Herrick’s language ordinarily contemplates only women with single Roman names: Silvia, Perilla, Perenna, Anthea, Julia. Such classical women need only one name, because when they die they will be interred under many other words.

But Prue’s two English names teach us that her tomb is no more than a small, plain stone. Above its humble English flower rises an urn made only of text: 21 lapidary words written in Prudence’s memory by a kind master.

Before he marched north to Savannah in the fall of 1864, General Sherman evacuated the remaining population of Atlanta and then burned all sites in the city with military value, including the railroad station. After the last train left, the corporal with his book left too. No one was left then to read the words that once sang to Atlanta, “Queensware” and “Negro auction.” Unread, the words at the top of the image and the words at the bottom had come at last to belong to a common language. It was the silence of the urn.

Details of the slave market can be seen more clearly in this photoshopped copy of the right frame. 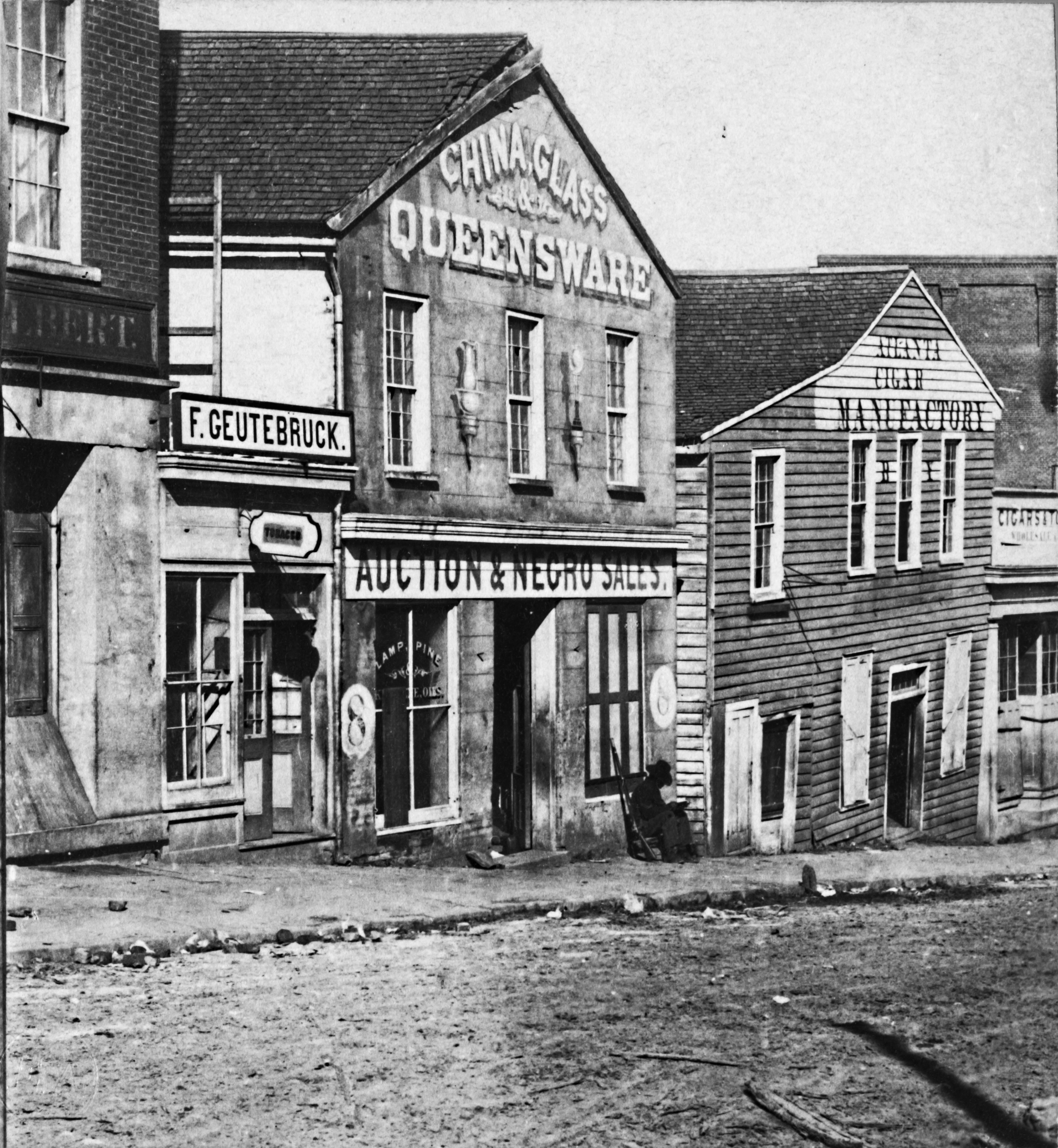