One day in 1941 a locomotive in an image frame went moving to the upper right. However, Alfred T. Palmer’s photographic history of the event also records a countermovement toward a vanishing point at the upper left. In the image’s center, emerging from that clash between the left-to-right implication of narrative and the right-to-left illusion of perspective, there is then seen a hero. Because his existence within the frame is only a formal function of his properties as an image, this hero is no more an individual man than a Rocky Mountain is an individual stone in the oeuvre of Palmer’s mentor Ansel Adams. The image-hero has no name because he has not yet been reduced to the need for a name. Still damp with the lochia of his new form, he is legion for the moment.

And so, satisfyingly, he doesn’t have a name to interrupt the moment. Instead, he has a caption. At the luxuriantly padded full-length of 87 words, this enwraps the hero in historical immortality this way.

Shipbuilding. “Liberty” ships. Most large shipyards have their own rail systems, with several locomotives and flat cars used for hauling heavy ship parts about the yards. This man operates such a locomotive transporting completed sections from a former freight car plant six miles to the ways where they are assembled into completed ships. All parts are prefabricated in this huge Eastern plant which formerly turned out freight cars. The completed sections are then carried six miles to the ways on flat cars. Bethlehem-Fairfield Shipyards Inc., Baltimore, Maryland

And do you need any more than that? Isn’t “this man” actually the best name for this recurring character in the long serial of Everyman? Look. 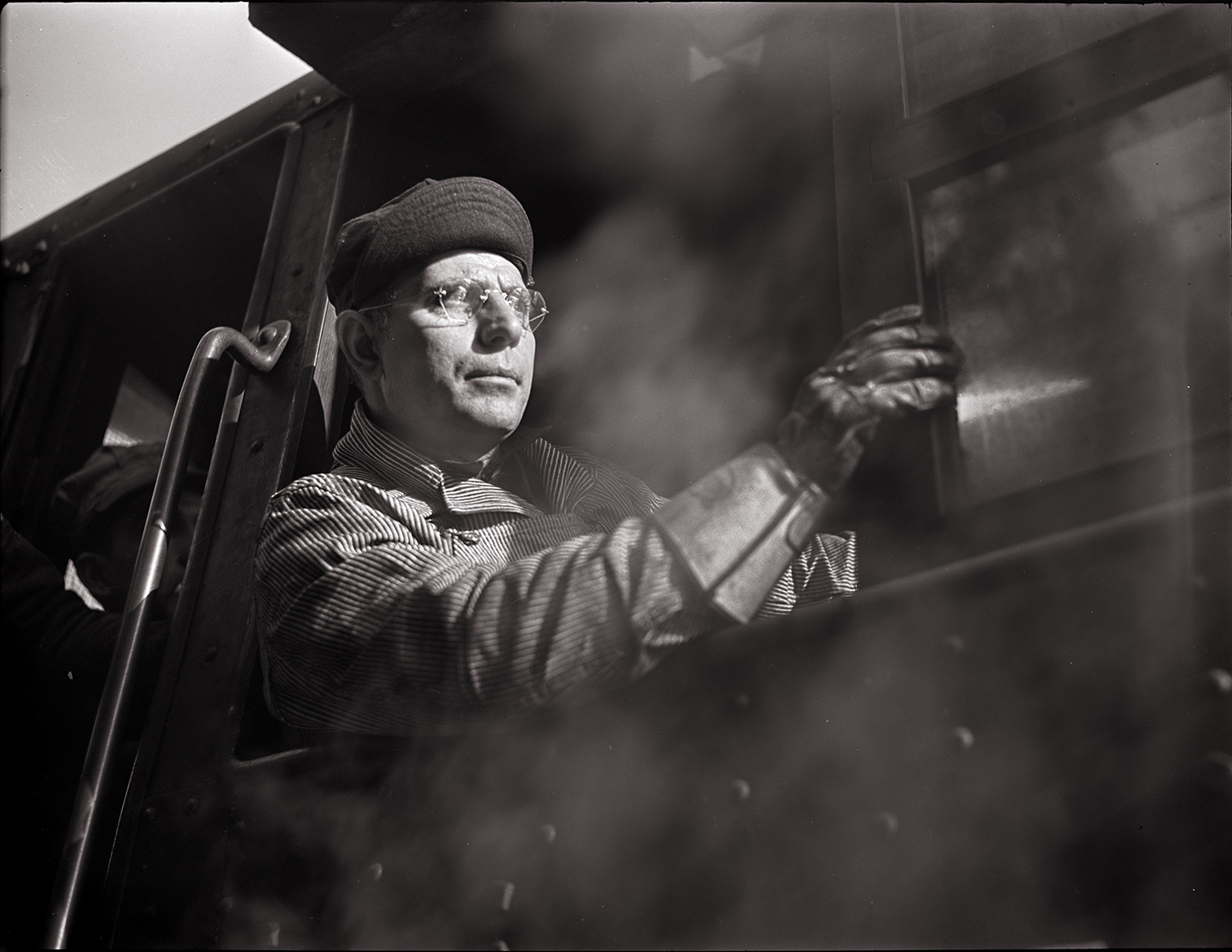 No, a name wouldn’t add any extra significance. Now that he is on rails, the man named This Man is en route forever after along the progress toward allegory. He doesn’t need to pre-order an inscribed namestone for the end of the journey because he is never going to arrive at a death. During the era when Alfred T. Palmer was his contemporary, he was intended to be seen morally, and now in the aftermath he is seen only under the unintentional aspect of aesthetics. Either morally or aesthetically, he doesn’t have an individual biography with a final date at the end; he never has had. He is only what the politics of the Liberty ship era created him to be: This Man.

But re-look and you’ll see a second man. Nestled behind the hero is a squire: the fireman who has made himself useful with a coal shovel and proceeded to generate the image’s grandly steaming scenery. Perhaps this other this man actually would have appreciated a mention. After all, men with shovels aren’t often depicted under the aspect of captioned proper nouns. In this image, for instance, the line of perspective from lower right to upper left ascends straight over the fireman’s head, outsoaring the face occulted under a perhaps newly purchased to look nice in the picture, but who cares? hat.

But no. For the purpose of image and caption, all that matters about the fireman is his having been nestled. Here he is in his nestling, then: a decoration, present in the composition only to provide contrasting darkness and silence and self-effacing mortality among clouds of hissing steam and sprays of words. For a war against Japan, ikebana.