If you entrusted your wealth and your women to Jeffrey Epstein, this advertisement’s roman fonts are for you.

But if your holdings are with Fox News, scroll down to the fine italic at the bottom.

It comes from an undated Scottish reprint of an American text by the health lecturer Sylvester Graham of Northampton, Massachusetts: 1834, second edition 1837. Whether you know it or not, Graham occupies a happy place in your kitchen. He is the man who gave his name to the Graham cracker. In his lifetime, however, he thought of small pleasures like that one as aspects of a much larger happiness. It may not have been mere commercial motives that placed his ads in America’s pioneer Abolitionist newspaper.

No; because Sylvester Graham conceived of happiness in what we’d probably recognize in 2021 as Republican terms: a liberation from bondage to bondage. You incels who reverently stood before cross and flag on January 6, 2021, believing yourselves worthy at last to track shit through the Capitol, what do you think? Way back in 1837, wasn’t Sylvester speaking for you? Here you are: described on Coates page 57, and then lovingly prescribed for.

The question is often asked,– Is it best for a young man, of suitable age and circumstances, to marry, when he is in a state of great debility and morbid irritability, resulting from self-pollution. To this I reply, as a general rule, that if a young man has so injured his body by any mode of venereal excess, as to be subject to involuntary emissions of semen on occasions of considerable excitement, or irritations of the parts from riding on horseback, or from other means, and also, to be subject to frequent nocturnal emissions, it is far safer and better to defer matrimony, and to avoid all dalliance and familiarity with females, till he has, by a rigorous adherence to the regimen laid down on the pages from 33 to 35, improved his health to such a degree that he is wholly relieved from his involuntary discharges by day and by night. Let him constantly push his exercise in the open air, so far as he can comfortably bear it. If he finds riding on horseback irritates the parts too much, let him avoid that sort of exercise. Where it can be done, regular labour on a farm is the best mode of exercise for such a person. To use the language of young people, if he is in love and courting, or engaged to be married, let him find some good excuse to go away from home, or, by some other means, which are honourable and kind towards his “sweetheart,” absent himself entirely from her, till he recovers from his difficulties, and is in a proper condition to marry.

By providing himself with a quantity of unbolted wheat-meal sea-bread, made very thin, he may with great advantage go a voyage to sea as a sailor.

Yes, the paragraph is only that single sentence. It stands before you as an oracle, chanting Know thyself; quaff thy nutritional supplements. You once were a mere Graham character, but now you have eaten of that which is unbolted. Making your congé from notional “sweetheart,” you have become your destiny: in this instance, as an extra picturesquely costumed as Leslie Fiedler in the scene from Two Years Before the Mast that got D. H. Lawrence classically off. 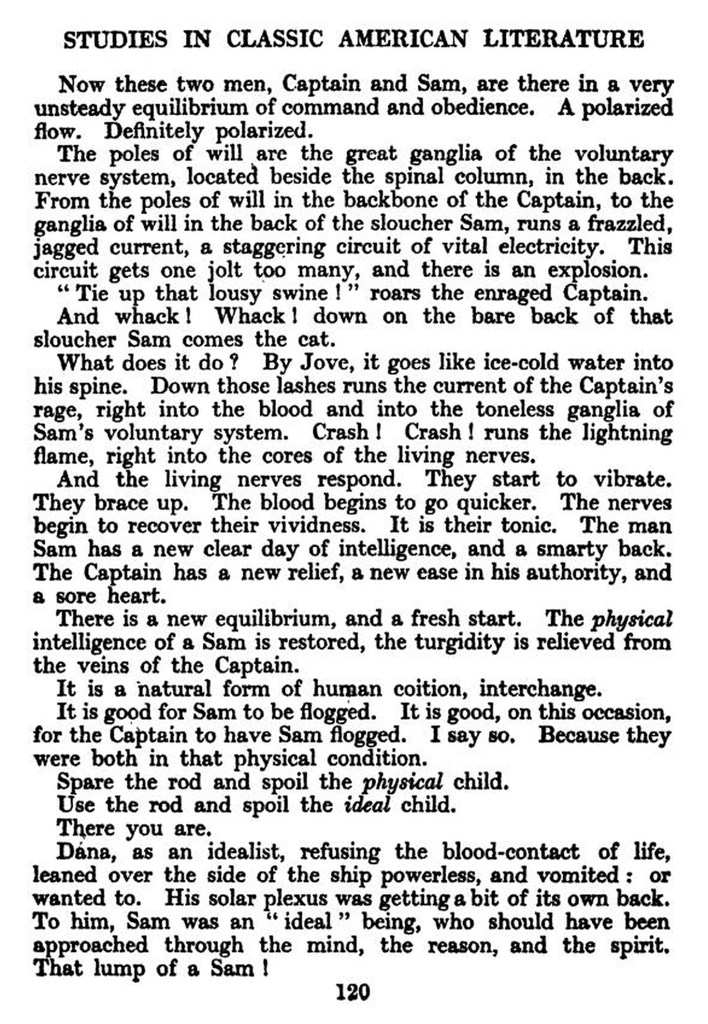 Ceteris paribus, of course, as Fox News’s legal department will have reminded you in the fine print.

But doesn’t the magnet feel comfortable as it rusts away next to your skin?

The Grand Old Party assures you it does, by Jove. If it doesn’t, that’s what you get for being a pussy.