In the port city of Hoboken, New Jersey, bodies are unloaded from a ship and transported through rain and words. 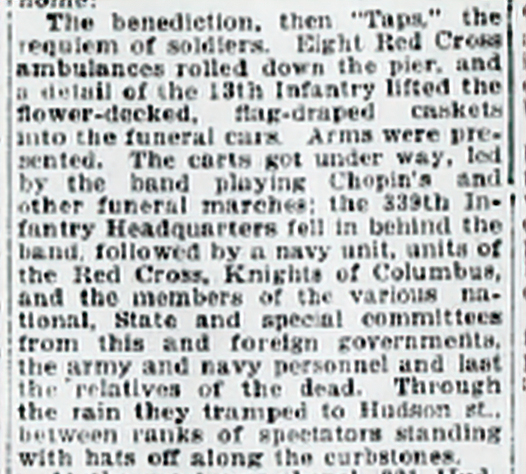 The words come from a two-column article on page 2 of The Brooklyn Daily Eagle for November 13, 1919: “Bodies of 111 U.S. Soldier and Sailor Dead Brought Home. Gallant Michigan Boys Gave Lives in Northern Russia — Impressive Ceremonies at Pier.” It includes the term “curbstones.”

If that plural and the phrase “gallant Michigan boys” read now like antiques, that is not the words’ fault. As of 1919, curbs actually were made of stone and the Michigan war writer Ernest Hemingway hadn’t yet begun publishing his deconstructions of words like “gallant.” But language change makes no allowance for changes in sensibility, and whatever it is that the words may once have represented is harder to feel now. In a cemetery in Michigan there is a war monument in the form of a polar bear,

but the episode of war that it commemorates is now all but forgotten in Michigan: the failed campaign of the American Expeditionary Force, North Russia, between 1918 and 1919. It is where the 111 men of rainy Hoboken met their deaths.

What you have been reading so far, then, in words and allegorical symbols, is a chapter in a history of the no longer wholly comprehensible. Somebody once wrote a marginal scholium on the chapter and called it “Dead Soldiers from Russia,” but it hasn’t integrated with the composition’s imagery. It is extrinsic. To its left, the composition has gone about the business of its rainy day by slow-dancing the hundred and eleven down a diagonal between the human matter of umbrellas (“Chopin’s and other funeral marches”) and the celestial matter of the rain, but the words in the black band don’t sing that music.

But in the rain the silent tree, leafless but living, curving itself down over the music and the dead in obedience to a lyric without words . . .