Most of the coverage in this issue of the Soviet magazine Proletarian Photo was devoted to parades. The occasion was the fifteenth anniversary of the October Revolution, and the magazine’s page-1 editorial was titled Шаг вперед, Shag vpered, “Step forward.”

As an idea, forward can connote motion through time as well as space, and the mood of most of the images that follow those words is triumphant across time in the mechanical nineteenth-century style of Whitman’s “To a Locomotive in Winter.” A huge rectangular block of men is depicted moving methodically from one side to the other of Red Square. An approaching locomotive seen from a low angle, Rodchenko-style, rushes into the image plane and smashes it flat with a nameplate stamped J. Stalin. Repeating from one page to the next, the series might remind you of Wordsworth calling up to you from his own page, “Up! up! my Friend, and quit your books,” if Wordsworth’s voice were possessed of a sidewalk crusader’s shriek. Just come and come and come, shriek the pictures. But amid the shrieking there does stand out one image consecrated to pious memories of the past and, perhaps, hope for a future in which the story of war is a quiet tale to be told to grandchildren.

This image’s caption reads, “Red partisans on the tribune at Red Square. Photo by A. Sternberg (Soyuzphoto).” 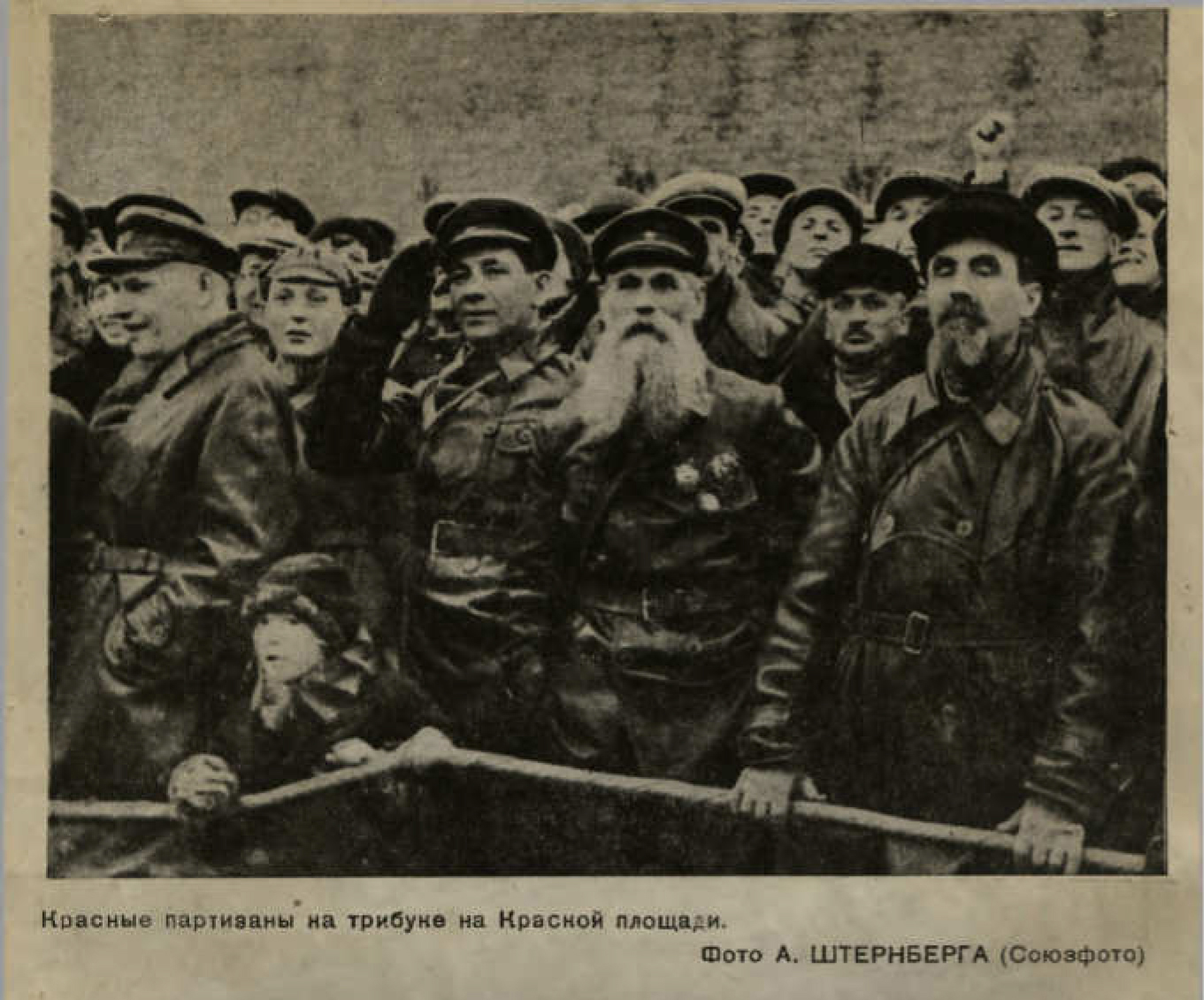 Like the magazine’s cover, the page bearing the image toward us has been browned by time. But at least a change of pigmentation can be partially reversed in the computer, and that reversal may appear to lighten the image’s connotative burden along with its optical saturation. After all, the portentous artifact you’ve just seen on a monitor was once just a layer of journalism laid down on newsprint: white and new and almost free up to then of history’s darkening, end-of-life symptoms. 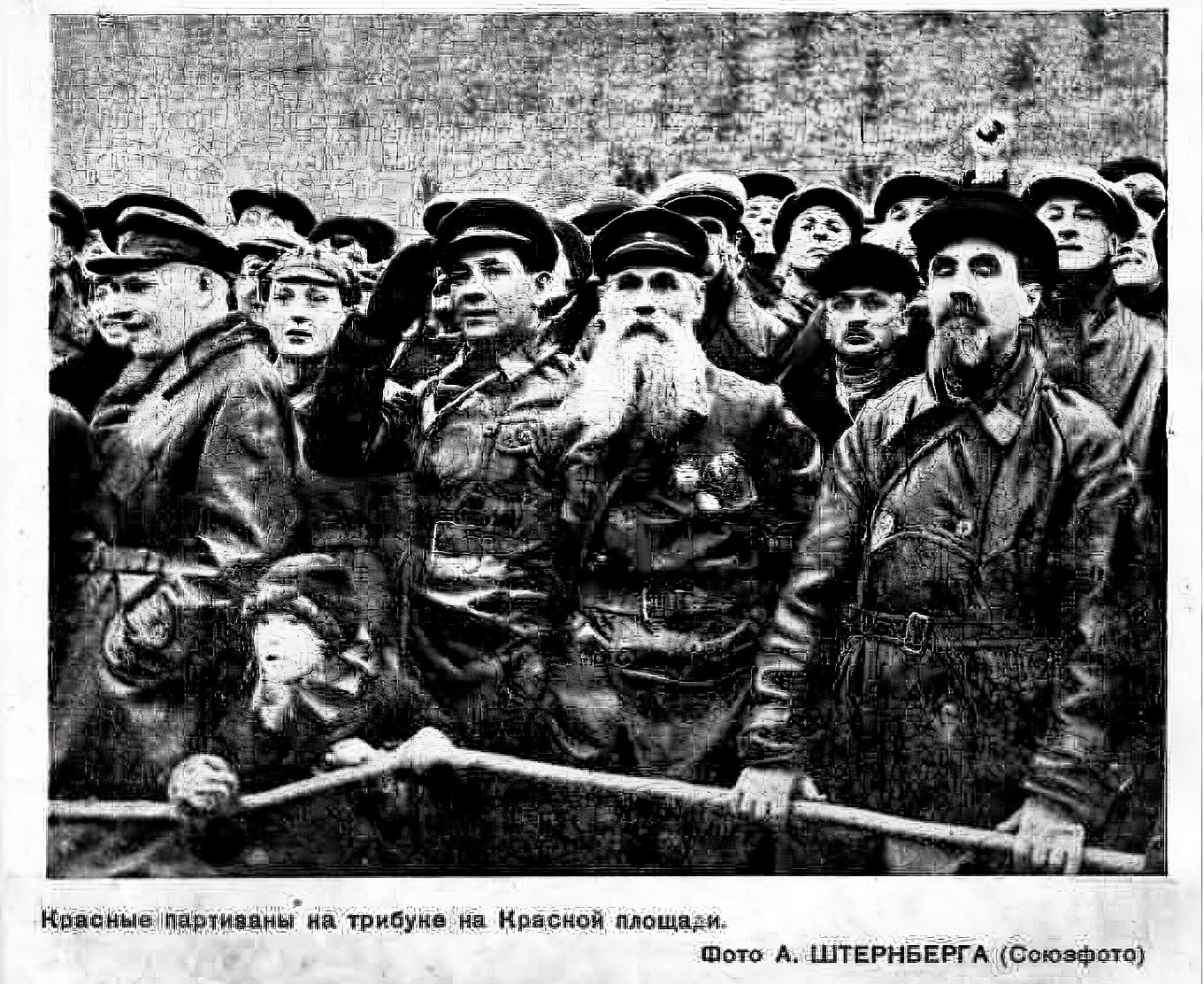 And there are faces — faces some of which seem to have been looking, at the time, directly into A. Sternberg’s camera.

I want them to be looking through the camera, to me. And I do have a computer partially connected to A. Sternberg’s apparatus, and the proletarians of Red Square helpfully inform me that for one of his other images (not this one) Sternberg used

So I try to look back through the Leica at the faces, with a connection to the computer as tight as I can make it. 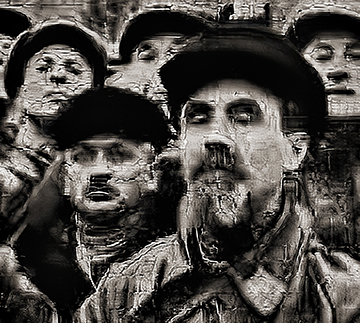 Take that as your paradigm and cautionary moral. It tells you that Molotov and Stalin, the men on the cover of the magazine, were wrong about photography, and Viktor Shklovsky the decadent formalist was right. Look at the blinkings and the craquelure, says Shklovsky; they’re all that was really there in the picture anyway. All they can be now, all they ever could have been, is artifacts of the process, manifested and then seen. Seeing is a kind of guesswork over the decay. It can never teach us what was there before the image was recorded, when all was blankly present. But it does teach us itself every time we open our eyes in the spirit of apparatus, and then it assures us that we too, as we see, are part of the picture.