We are tempted to read about before reading, and then to read before seeing.

Here, for instance, is a photograph in an unedited, as-is state. You can see that it’s a low-contrast image of the deck of a steamship, mounted with visible tabs on a page of an album. With its four big funnels, the ship looks antique, and it seems likely that the image itself had more tonal range before it began deteriorating with time. But there probably isn’t enough information in the image to make that temporal context into anything like a history. 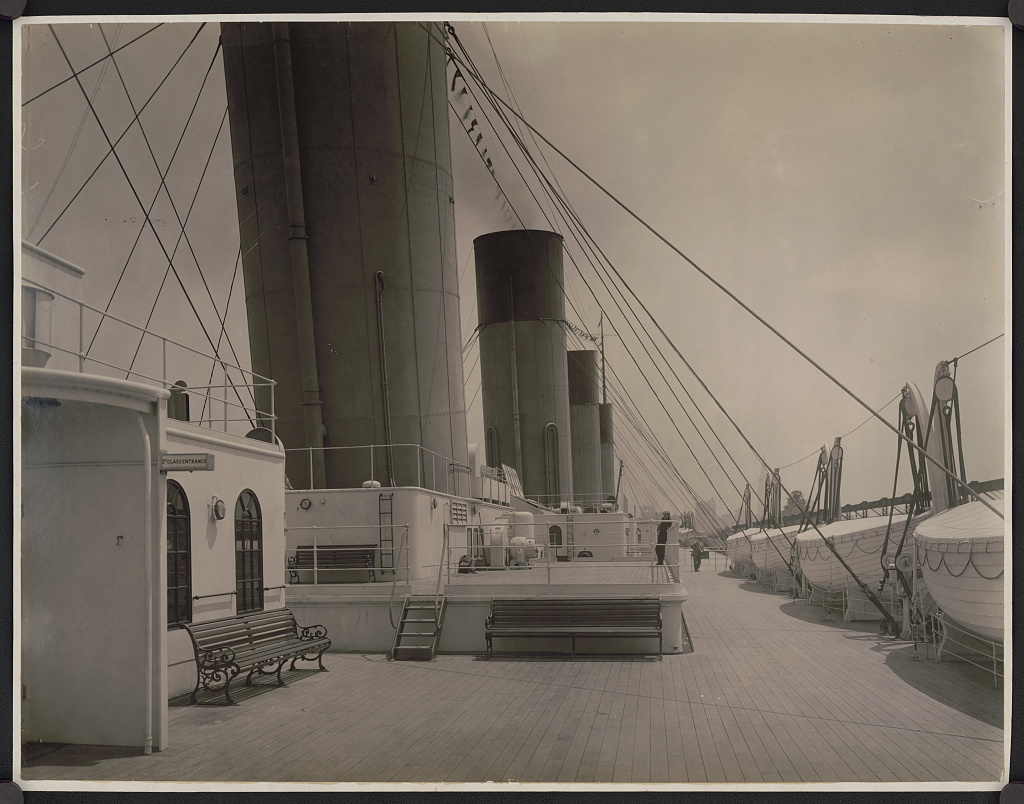 So go ahead now and try the experiment of reading about and then succumbing to the text. It’s at the other end of this image’s link to a record in the Library of Congress, and it can reward your effort with wordy materials for, if not a history, at least a journalism. The words will fill in the gaps that you may be sensing as you read. One pair of them of them will say, for instance, New York. Date, June 1911. Occasion for creation, completion of the maiden voyage of a passenger liner.

But then, as it proceeds to write itself, the journal will name a name. From the unassisted image itself you might have been able to deduce a location (New York’s Metropolitan Life Tower is visible) and at least one indication of a date range (the Metropolitan Life Tower was completed in 1909). But the name is wholly aniconic. It was printed on the ship, but not in any location visible from this image. You can read it only offsite, and only as a text. It says Olympic.

That, then, changes this image from an icon to a history, and if you know that history from before you will suddenly be filled with the desire to stop seeing this image and instead see an almost but not quite identical image — an image of something that isn’t in fact there. The city will be the same, and probably the pier. The naval architecture will be essentially unchanged too. Only the date will be significantly different: no longer June 1911 but a short time afterward, April 1912. And the name: no longer Olympic but . . .

Oh, you know. And suddenly you’ll realize that (a) most of the image you’ve just seen has been replaced by a fiction,

and (b) what remains will be something you no longer want to see. Filled with impatience before the actual, you won’t want to look at it; you’ll want only to refer from it to a history of something nonexistent. You’ll want to see that — or if not that, at least something as close as possible to that; a that by analogy.

So you’ll bring up this image of Olympic’s body in Photoshop. Make me a metaphor from this, you’ll think as you press keys. Bring sister Titanic before me as an ideal form, crisp and high-contrast and now safe at the pier where she was always meant to be. If that doesn’t give me the power to change the ending of her story, at least I can make a photokeepsake.

But the imaged actuality recorded in the Library never was crisp or high-contrast. It was an actuality of the age of coal, when white was never white but a spectrum of Whistler grays. To recover definition from this artifact is not to make it seeable again; it is only to make it seeable-through from the true actual gray to the false ideal white. If we are actually to teach ourselves to see, we may need the aid of one of those crippling prostheses manufactured for educational purposes: the bellypack bag half full of sloshing water that teaches men what it is like to walk while pregnant; the distorting lenses that teach cataract-vision. On an image, the phototechnical purpose of such an exercise would be straightforward. I shouldn’t want to recover a definition that wasn’t there in 1911; I ought instead to recreate 1911 sight, with its loss of definition. Since this is a photograph, I shouldn’t desire it to transcend its limits and write itself into an unabridged spectral history. I should desire only to read a history of how this ship was seen through smoke. It would be a matter of refusing to overlook mere appearances. If there is a timeless, essential, mythical beauty in this image, let it wait for now. Instead, let’s make a new memory of something we may not be old enough to have experienced: a memory of smoke. 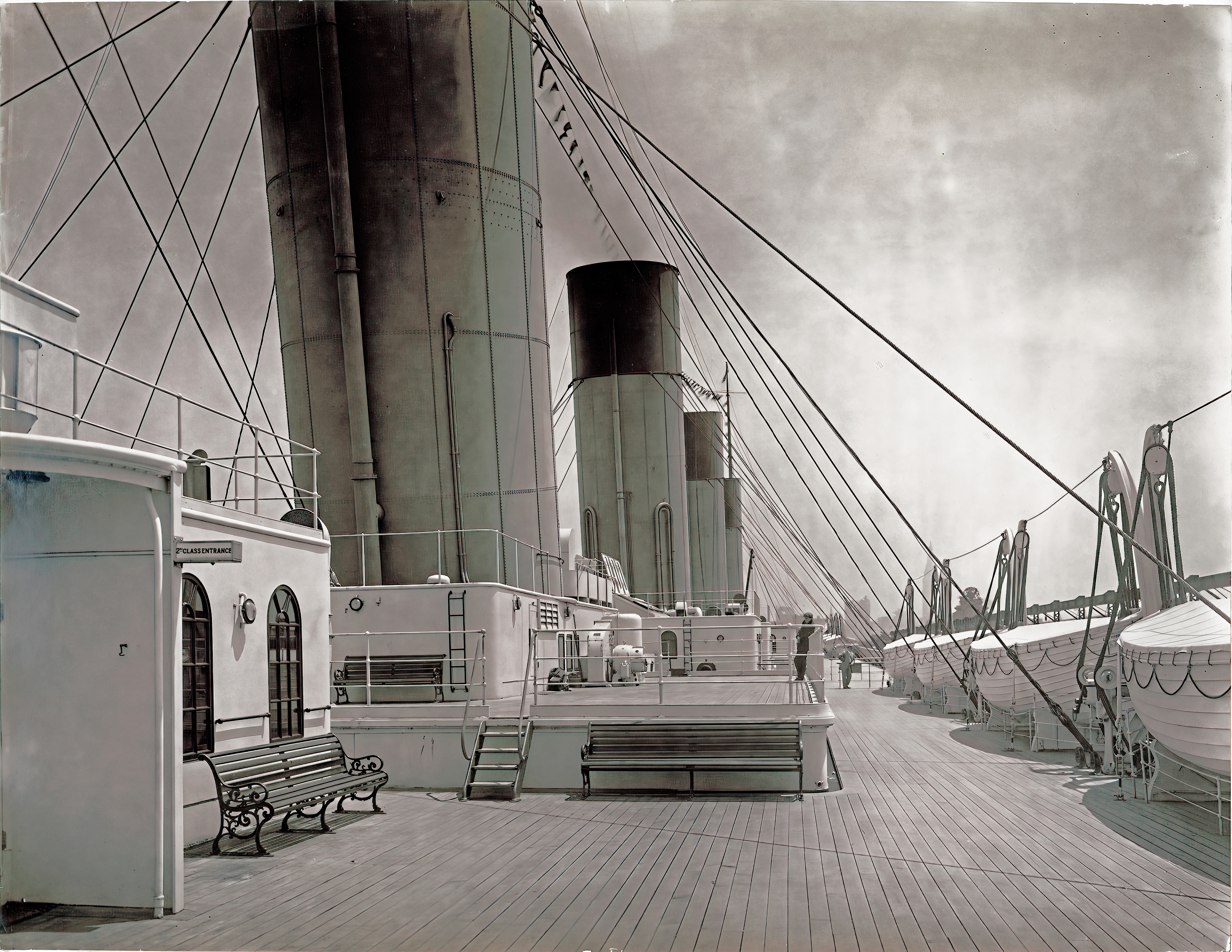 You make the Photoshop decision accordingly and shift the curves to favor the smoke. It dims the distance, lightens the shadows, translates the lifeboats with their sun-reflecting covers from chiaroscuro to grisaille — and then, a moment ahead of this one, it will take back all those effects and start over. There is no consistency here, no lasting value, no dramatic arc; only a play of surfaces, changing without ever rising to a meaning.

And no doubt the superficial, the business of surfaces, deserves its bad rap. The Olympic didn’t sink but came in time to a boring undramatic end in a scrapyard, and of course you’d rather overlook that contextless superficial fact on your way to an in-depth pseudo-memory of Titanic, colorized with metaphor:

But there’s this to be said for the superficial and the rude wordless stare at it: at least it sometimes lets you see what it is you actually have seen, whether or not you knew it at the time.