One of the divinities came to the contest cloaked in stars.

It was early in the twentieth century. In the United States, the relations of women to men were changing, and the things that the women and men lived among were acquiring new symbolic values. At certain moments when the symbolism was made explicit, the change became a speed series of what nineteenth-century photographers called instantaneouses, each imaged perception dissolving into the next. In Brooklyn on June 23, 1917, for instance, women and cars were gathered in pairs at Sheepshead Bay to compete before men in what the men called The Automobile Fashion Show. For readers the day after, a reporter created a pattern in words and brought it to life as an idea: the idea of celebration. The men in the stands at Sheepshead Bay had turned out to be Parises, and the reporter was their Pindar.

That making of patterns is what celebration has always done. When Pindar’s irregular lines shape themselves into a unity at the end of each ode, that becomes the award. But before she entered that unity in a monochrome text, Miss Bunnell played her part by the rules of color and motion. 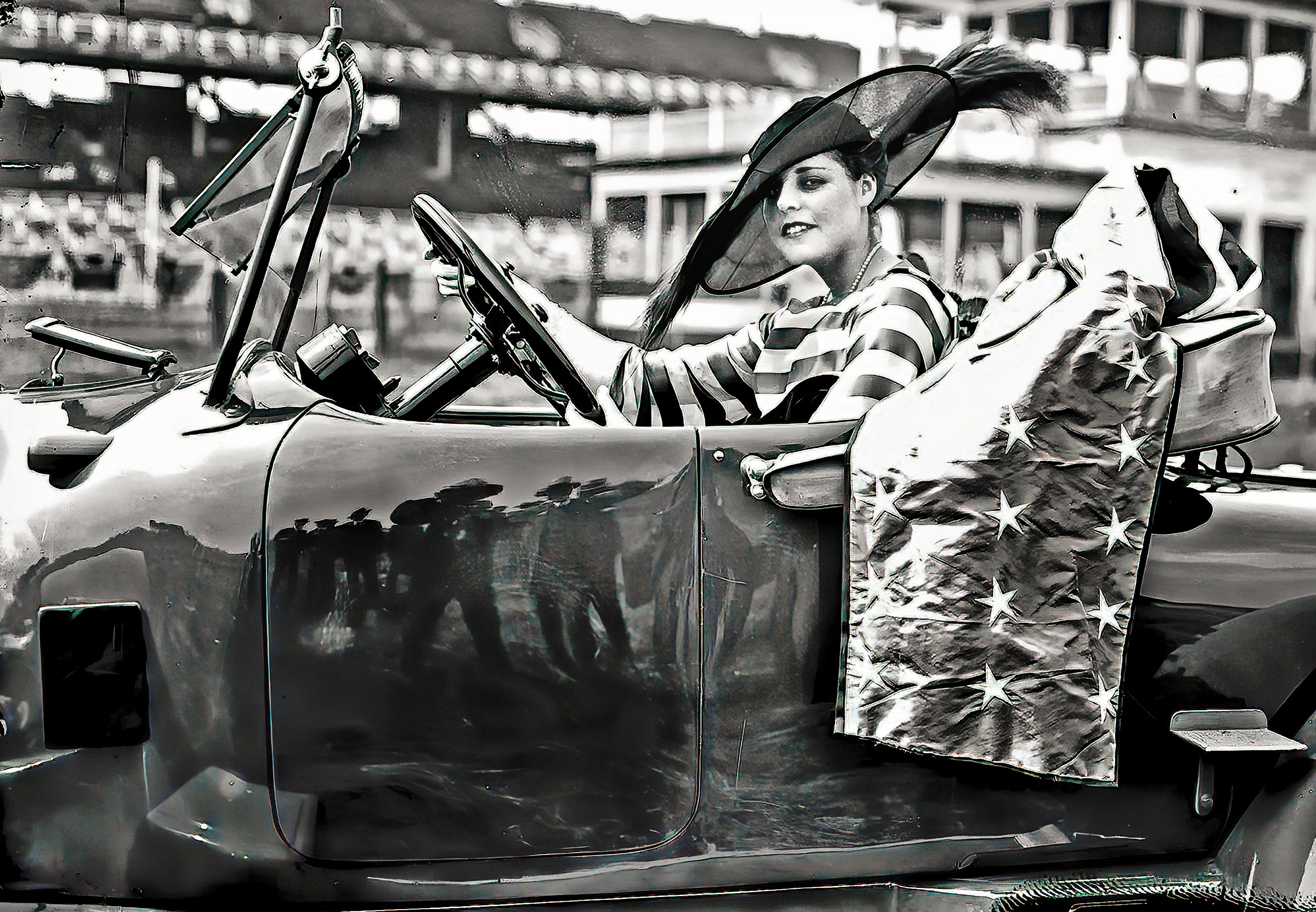 And then, a decade before The Jazz Singer, the pattern that established itself throughout her image took on a soundtrack. Something in the milieu of Sheepshead Bay Speedway swaddled Nephele in a garment of many colors, then packaged her in an oblong conveyance, closed its door, and unmoored it. Decoratively holding its steering wheel in cutely gauntleted hands, Nephele was afloat in one of the regattas of the Great War social season. Her story and her image (not this one but a similar one) were syndicated in newspapers all over the United States. And in later years, as a doctor’s socially prominent wife in small-town Vermont, she seemed, at least once, to be amused with what had become of her in the post-Packard years.

But the sounds were different in 1917. Look at the reflections that break up the Packard’s blue surface then. They show men of unclear aspect and unclear intentions — men who are surrounding the car and (as the Sun’s Pindar will Homerically chant) “raucous lunged.” Am I wrong to see a mirroring unease in Nephele’s face?

No matter. It is 1917, moving images are still silent in themselves, and bonds are being given. Even though Nephele will get the vote just three years into the future, the patterning of her image is holding for now. If the stars and stripes will prove in time to be not quite forever, they should at least remain in effect through the model year.

Details: Nephele Bunnell was born in 1897 (according to the Library of Congress site for this photograph, https://www.loc.gov/pictures/item/2014704911/) or ca. 1899-1900 (according to her obituary). Trained as an artist, she married Dr. Robert P. Williams of Rutland, Vermont, in 1931 and lived there until her death in 1944. Her activities in women’s art clubs at the time were covered by the local press, but as of July 2019 all I have found online of her oeuvre is an advertisement for a copy of a comb-bound recipe book, Out of Vermont Kitchens, self-published by a church in the early 1940s and said to contain some of her pictures. She is searchable at http://newspapers.com under her maiden name and her married name.

How much the lives of upper-class American women have changed since the twentieth century.

I have Photoshopped the 1917 image. An earlier Photoshop job is at https://jonathanmorse.blog/2017/09/24/dazzle-mode-in-the-era-of-edward-wadsworth/.