The noun air line (“chiefly U.S.,” says the OED) originally referred to the shortest distance between two points: a straight line, as might be drawn on a map. During the nineteenth century the term became a selling point that American railroads incorporated into their names.

In 1910 Ferdinand Graf Zeppelin began operating his airships on scheduled routes between cities in Germany, and that was the beginning of the airline industry as we know it now. Count Zeppelin tagged his business DELAG, but that word was only an acronym, not yet a name ready to escape into breathed air as an independent noun. Still flat on its ground, it stood in humble compound form only for Deutsche Luftschiffahrts-Aktiengesellschaft (“German Airship Travel, Inc.”). Nor in the English that Americans understood in 1910 was the name air line yet ready to slip the surly bonds of earth and fly.

But by 1910 life was playing around with the mooring ropes. The more famous of the two twentieth-century American magazines named Life was a mid-century weekly that specialized in photojournalism, but the earlier Life was less an illustrated history of its time than a word game played for eternal stakes. It was a humor magazine, and on January 6, 1910, it put the words air line into play and began doodling some thoughts on paper about what they were actually saying, not what they were merely meaning. 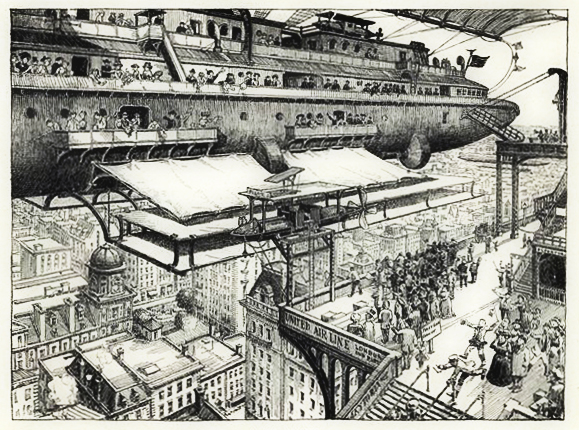 On December 17, 1903, the Wright Brothers had made their first powered takeoff, and six years and a few days later it’s obvious that the cartoonist still hasn’t actually seen a wing. But he always has known the language of air. He came to crying life on the day it began filling his lungs, and now the play with the mooring ropes has spun off a name. There it is, written across what in 1910 is still probably called a pier: United Air Line. It has no plural ending because it actually is united. It is a single line segment with a beginning and an end: an air line, extending (say the other words on the pier) all the way to London.

But the London at the other end of the line isn’t a city in England. It’s a word, it’s in you, and it’s on schedule to be reached happily ever after.